How does Oregon make offense look so easy?

How does a team like Oregon, a squad known for spreading the field in order to run the ball, also have one of the most dangerous big-play passing games in the nation? The answer may be simpler than it seems.

Share All sharing options for: How does Oregon make offense look so easy?

When a team is averaging 303.8 rushing yards per game, it gives the coach a great deal of flexibility in his play-calling. Out in Eugene, Oregon’s Chip Kelly maximizes such flexibility as well as any other offensive mind in the nation. When asked about an opponent’s defensive of game plan, Kelly often matter-of-factly answers, "Well, they can’t defend it all." Kelly generally follows that summation up by explaining that his dynamic offense simply takes what defenses give him, be it on the ground or through the air. Seems simple enough, right?

But what Kelly doesn’t gush about, even though he should, is the immense amount of pressure his offense puts on a defense. Over the past half-decade, the Ducks have been so successful at spreading the field and running the ball that opposing defensive coaches find themselves in a very sticky quandary. How can an opponent of Oregon fortify its run defense without crippling the soundness of the pass defense?

History shows that when you play Oregon, you’re eventually going to get gashed one way or another (that is, unless you have a top-ranked SEC defense that can dominate with the front-seven and stick wide receivers one-on-one on the outside). Most opponents simply have to pick their poison on defense and live (or die) with outcome. But even when the rare instance occurs where an opposing defense slows Oregon’s vaunted ground game, the Ducks remain ridiculously explosive on offense.

In the still-shots below, we will look at the Ducks' first touchdown from this past weekend's win over Arizona. As you can see, the Ducks have the ball in the red-zone and have lined up with two running backs and three wide receivers. Fearful of the Ducks’ running attack, Arizona chose to line its boundary safety up just seven yards from the line of scrimmage. 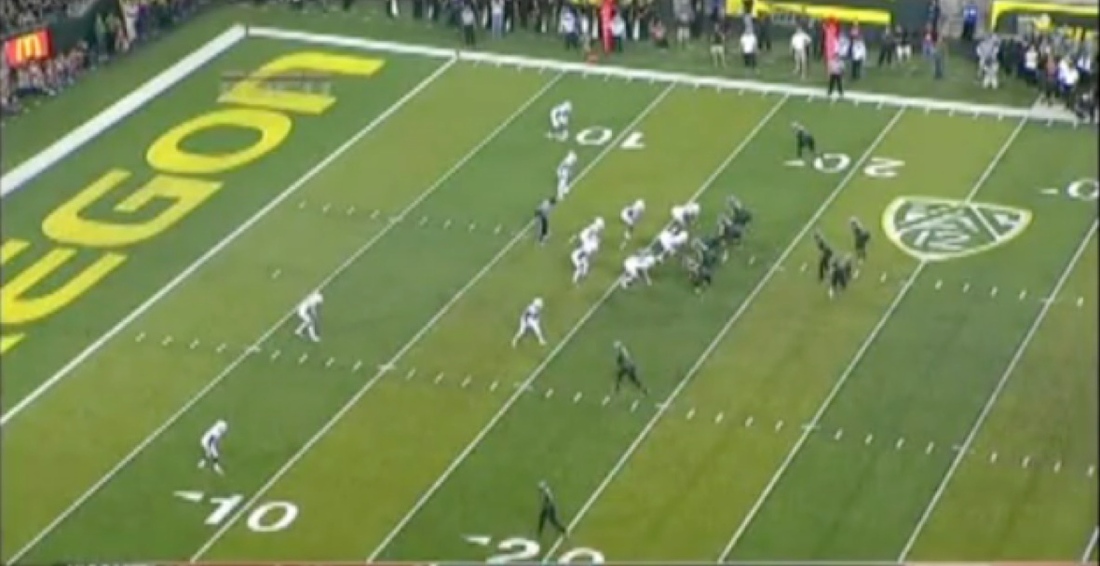 As the Ducks motioned their left running back towards the boundary and the ball was snapped, Oregon presented multiple options to attack. One, the Ducks could have simply handed the ball off and ran their traditional read-zone play. Two, Oregon quarterback Marcus Mariota could have faked the handoff and ran a read-zone option with the back who was in motion towards the boundary. Three, the Ducks could run play-action against an Arizona defense that was stacking the line-of-scrimmage in an effort to slow the run. 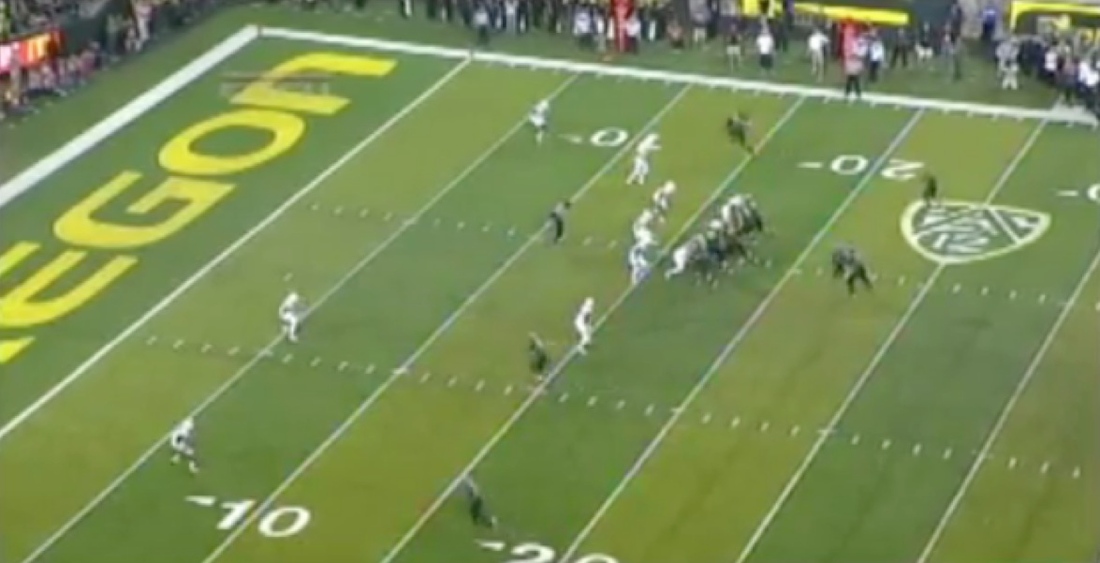 As you can see in the third still-shot below, Oregon opted to go with option number three: the play-action pass. Unfortunately for Arizona, the Wildcats had pushed all their chips to the middle in an effort to stop the run threats. After the snap, Arizona’s boundary safety collapsed towards the line-of-scrimmage because he is responsible for the pitchman had the read-zone option developed. The outside linebacker to the wide-side of the field, responsible for bumping the slot wide receiver should a pass develop, got sucked up by the threat of the traditional read-zone. Too many threats to account for, and not enough men: this is why it gets sticky for a defensive coordinator. 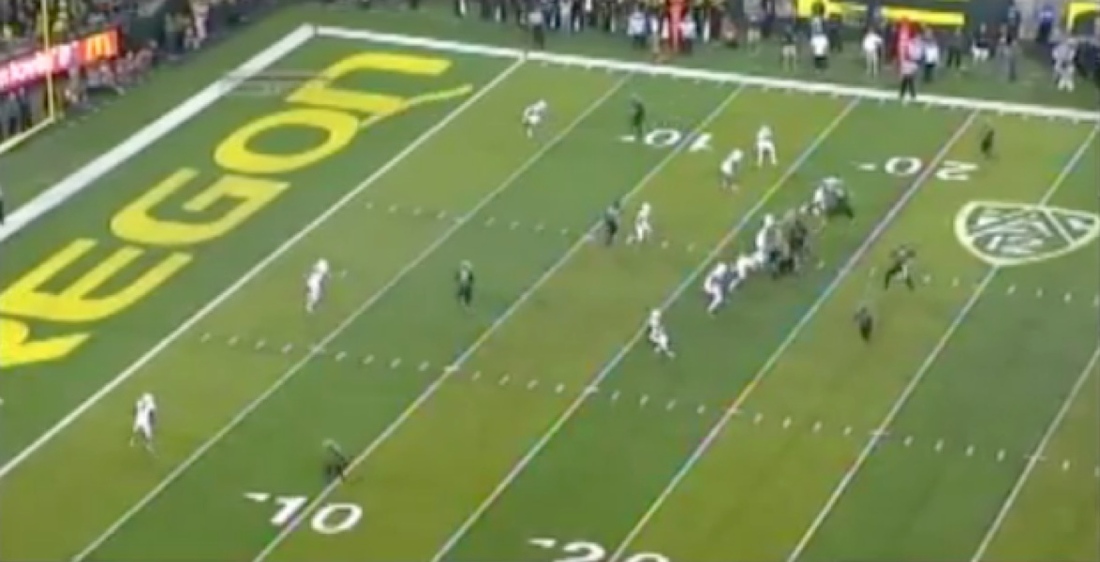 Because Oregon created so many threats on this particular play, the defense was left vulnerable somewhere. Since the outside linebacker was baited in by the threat of the run, the slot wide receiver, Daryle Hawkins, was allowed to easily bend over the top of him and get inside of the safety in coverage – a huge no-no in this particular defense. The rest is history. 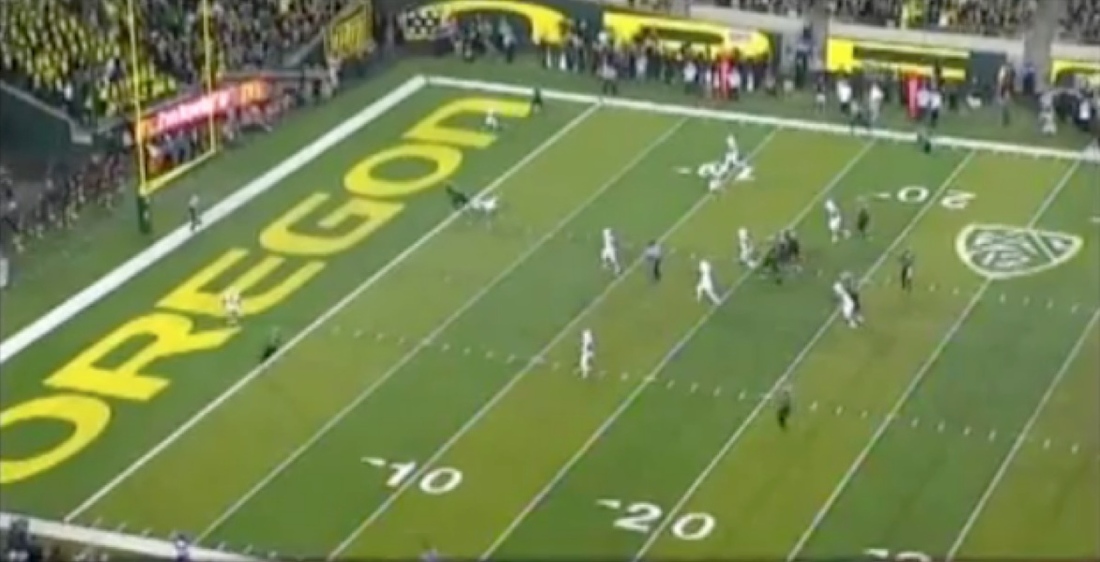 The danger of Oregon’s run game forced the Wildcats to over-commit in hopes of slowing it. In response, the Ducks used the play-action pass to take advantage of a defensive scheme that put Arizona’s safety in a nearly impossible situation. When the outside linebacker failed to widen the slot wide receiver to help the safety, the free inside release made an Oregon touchdown just a simple pitch and catch.

As the still-shots show, the threat of a proven ground game can set-up big plays in the passing game. In this particular instance, the threat of the read-zone and/or read-zone option made a play-action touchdown look simple and easy. By effectively running the ball year in and year out, the Ducks have established an offensive machine defined by its’ great flexibility and continuous innovation.

While defenses have been able to stall the Ducks’ attack at times, the flexibility of the system ensures any such slump will never last too long. But the big question that remains is - Can the Ducks buck history and establish its renowned ground-game against the beasts of the SEC? Hopefully we’ll get a chance in January to learn the answer.