Highlighting Florida State's go-ahead drive in their 49-37 win over Clemson on Saturday.

Welcome to the fourth installment of The Key Drive, a series that focuses on one drive a week that highly impacted the outcome of a game, essentially the drive that was the key to winning or losing.

Coming in to this week many college football fans were hesitant about giving Florida State such a lofty ranking. Matt Hinton put it best when he said, "There's still a distinct aura of 'fool me twice, shame on me'" about Florida State. This was the game that the Seminoles needed to step up and prove to everyone that they belonged back in the Top 5. No. 10 Clemson came in to Tallahassee with aspirations of another ACC Title and maybe a little more. This game was easily one of the biggest games of the weekend and certainly the biggest matchup the ACC has seen in quite a while. The game that followed was incredible to watch, especially as a Florida State fan (yes I go to Georgia Tech, but both my parents went to FSU, so I can't stop being a fan just yet). That is why the Key Drive will focus on third-quarter, seven-play drive that gave the Seminoles a lead they would not relinquish against Clemson. And this week I will especially have to be on my toes as two great SB Nation blogs that cover Florida State and Clemson, Tomahawk Nation and Shakin The Southland respectively, provide some of the best coverage in the network. Now we can set the scene.

Clemson jumped out to a two-touchdown lead four minutes into the third quarter thanks to some special teams miscues by FSU and some great play calling by CU offensive coordinator Chad Morris. Florida State was able to come within three points of Clemson, 31-28, by scoring a rushing touchdown and a passing touchdown. Combine that with an improved defensive performance after half time and Florida State is suddenly in position to take the lead with a touchdown. A short punt by Spencer Benton gave Florida State the ball at the FSU 36 with 5:18 remaining in the third.

Florida State used many typical spread formations in this game, and this drive is no different. Here they line up with Chris Thompson to E.J. Manuel's right and fullback Lonnie Pryor to his left. The play that is run is the simple zone read concept that proliferates college football today. At the snap, Manuel reads the right defensive end -- if the end closes on the running back, he will keep it, and if the end takes the quarterback it is a simple hand-off. Unfortunately for Florida State, Clemson's DE Malliciah Goodman does a great job of setting the edge and forcing Thompson to cut the run up early, and the rest of Clemson's defense swarms to the ball. Setting the edge is the easiest way to stop an outside zone run and it prevents Chris Thompson from using his speed to get outside and turn it up.

On this play, Florida State brings in a TE for Pryor and lines up Manuel in the shotgun with Thompson. Clemson drops back into a zone defense while bringing extra pressure with a linebacker. Unfortunately for Clemson, this play is designed for a short pass. Florida State's offensive line cuts down the Clemson D-line and tries to get easy passing lanes for Manuel (then again, Manuel is 6'5"; passing lanes come easy to those people). Thompson comes out of the backfield on a quick out while the receiver to the short side, Kenny Shaw, runs a shallow dig route. He simply runs inside of the outside linebacker assigned to the flats and sits down in the zone. As you can see in the screen shot, the out route by the running back takes away the defender and leaves a wide hole for Shaw to sit in. This is an easy throw for Manuel and a great read on the defense. 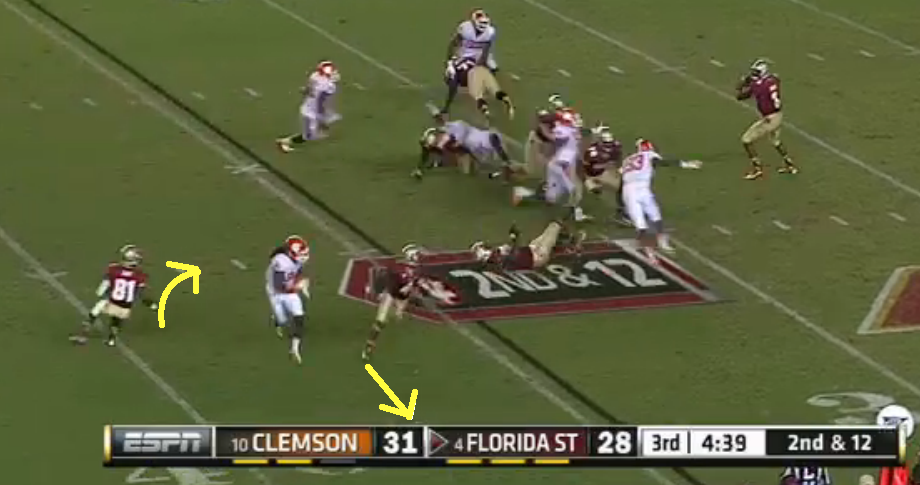 It is always fun going through each drive, play by play, really looking at the routes that are run by the receivers, and noticing how often teams run the exact same play during drives. Florida State lines up in the same formation, runs the same route combo, and then throws it to the exact same receiver. I feel like you should at least force the quarterback to make a new read. If Florida State believes Clemson will keep running zone and that the line can protect E.J. Manuel, then they will continue to run these route combinations to exploit the zones.

Florida State does not change its formation and sends out all five skill players on passing routes. This leaves FSU with only five blockers to block who ever Clemson brings on a pass rush. Florida State believes that its offensive line can handle this, and the line delivers on this play. Manuel has all kinds of time and is able to let the route combination develop. He delivers a great pass that hits the receiver in stride. With this kind of time, Florida State won't have trouble moving the ball through the air.

FSU again runs a simple zone read hand-off to the running back. The offensive line gets a great push on Clemson, and Chris Thompson has a lot of room to run. The members of left side of the offensive line simply pivot their man to the outside and use the run fake by Manuel to pin defenders away from run. The right side is able to move up to the second level of the defense and put a hat on every man in the box. Florida State is able to block the Clemson front with no double teams. Easy running here. You can see the alley that is formed by the offensive line and a running back with the speed of Chris Thompson is going to be able to hit this hole quickly.

I am not gonna lie, I chose this drive mainly for this run. Even though it didn't count because of a holding call (and while I think the ref did see holding, there wasn't much there but hand placement to call it on Nick O'Leary), this run was great to watch. As you can see the line makes a great alley to run through for Thompson. 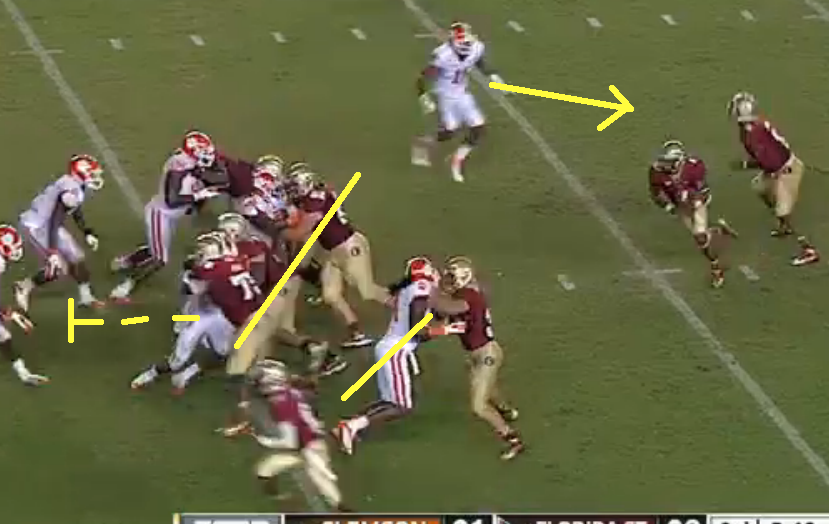 From there Thompson puts the team on his back and really makes an impressive run. He broke his back last year and has come back as an even better player, in my opinion. A great story on him can be read here. This is just a great and exciting play to take the lead, but unfortunately a holding call brings it back.

Wow, what a great throw. Not much to this play. Manuel reads the coverage and probably knows where he is going with this ball on Step 2 of his 3-step drop. This is great resolve by Manuel and the Florida State offense to not get upset over the points being taken off the board. Manuel shows great trust in Rodney Smith to get over the top of the corner; when Manuel releases the ball, Smith isn't behind his man quite yet, but Manuel puts the ball where Smith will have a chance to run underneath it.

This drive was perhaps the peak of Florida State's epic run to surge past Clemson. Clemson really stopped getting any type of pressure or penetration from the D-line on this drive, and Florida State was able to take advantage. With a Quarterback playing as well as EJ Manuel was on Saturday, it is obvious that future defenses will have to get more pressure on him and try and confuse him more than Clemson could on this drive.