Welcome to the third installment of a new weekly piece at Football Study Hall, The Key Drive. The Key Drive will focus on one drive a week that highly impacted the outcome of a game, essentially the drive that was the key to winning or losing.

This week in college football featured many big games between quality opponents, a welcomed break from the cupcake fest that is the first two weeks of the season. Florida and Tennessee had a showdown in the SEC East that featured many big plays late in the game (oh, and also one of the best Dooley moments ever). Michigan State and Notre Dame faced off in a defensive battle that unfortunately did not have near the drama as the previous couple of meetings. And obviously out west Stanford needed no Luck in defeating the Trojans for a fourth consecutive year.

But for me this week was extremely difficult to pick a Key Drive for a game. As fun as Florida's two late touchdown drives were, doing a Key Drive piece on a one-play scoring drive probably wouldn't make for the highest quality post. Many more games across the country featured big plays late that are very exciting, but don't make for the Key Drive piece. And while I would love to support UL-Monroe's march towards an SEC championship, using the same team two weeks in a row isn't something I want to do, no matter how impressive a Sun Belt team nearly taking down two SEC opponents is. So this week we will take a look at Missouri's impressive goal line stand against Arizona State.

Entering the fourth quarter Missouri seemed to have little cause for concern about James Franklin missing his first career start. Redshirt freshman Corbin Berkstresser played well enough to stake Missouri to a 24-7 lead. From there, things got a little more interesting. Arizona State scored two quick touchdowns at the start of the 4th quarter to make it 24-20 with 11 minutes remaining. Missouri was able to drive the ball down the field on a 12-play drive, but unfortunately a bobbled hold on the field goal attempt (the Tigers' third snap-to-hold miscue of the game) caused a bad miss. All of a sudden, Arizona State had the ball with 69 yards to go for a go-ahead touchdown.

This play exemplifies just how influential the zone read has been in the last couple of years. At the snap Arizona State is lined up in the shotgun with D.J. Foster lined up to the right of Taylor Kelly. Kelly hands the ball off to Foster, then drop backs as if he is passing. The threat of the zone read occupies the backside defensive end long enough to prevent him from having any shot of catching Foster. Also, the threat of the zone read causes the backside linebacker to simply squat and wait to see if the quarterback kept the ball or not. The pass fake causes the linebacker to pause even longer, and by the time he runs down the play, Foster has already earned himself seven yards. When you can take two players lined up in the box out of the run play, you should be able to grind out healthy yardage every time, and Arizona State capitalizes with a nice gain.

Arizona State lines up with a single running back beside Kelly, trips to his left and one receiver to his right. At the snap Missouri only brings 4 rushes but boy do they cause some damage. Missouri's right end Kony Ealy absolutely destroy's ASU's left tackle and knocks him to the ground. You really don't see a left tackle get thrown completely on his back on a bull rush that often. 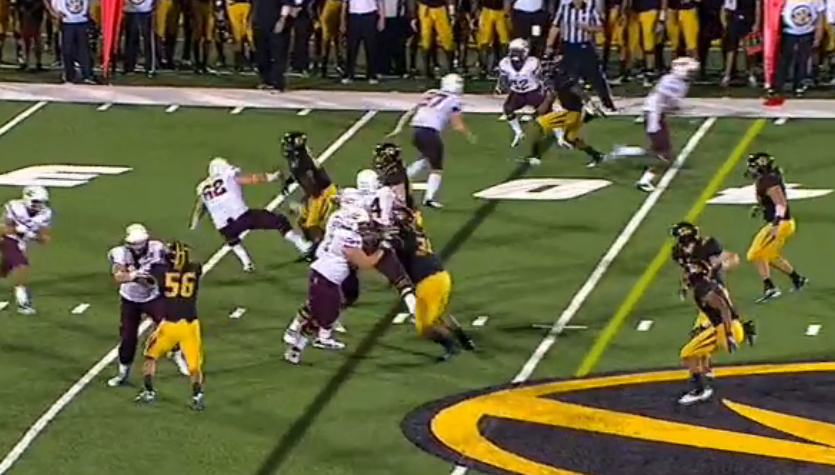 Luckily for Taylor Kelly, the route combo that ASU runs with the three receivers opens up quickly enough to allow for a completion. But Ealy still runs Kelly into the ground after the pass for a tough hit. ASU runs a route designed to exploit the Cover-2 that Missouri is running with their base 4-3 defense. The outside receiver runs a quick hitch, and combined with a small pump fake by Kelly, the corner runs up to stop the quick throw. The middle receiver runs a post route behind the linebackers and in front of the safety, which occupies all of their attention. That leaves the inside receiver to run a quick wheel route where he fakes outside and then turns up field along the sideline. The pass is actually very under-thrown, and Coyle makes a good adjustment to come back to it. If this is a better throw, it could have been much worse for Missouri.

Taylor Kelly seems to tuck this ball very quickly, and D.J. Foster comes out of the backfield and attempts to block the linebacker instead of running a route. This could have been a draw play, but it is hard to tell. Either way ASU gets lucky with a facemask penalty on Sheldon Richardson. 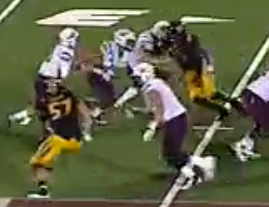 In four plays, Kony Ealy has already made his presence known to anyone watching this game. ASU runs a zone read out of an offset pistol formation. The wing back lined up on the right is tasked with coming down across the formation and blocking Ealy. Let's just say he doesn't.

The offensive line gets great push against the rest of Missouri's defensive, line and there is certainly some running room there. However, because Ealy has crashed so well on the running back and blown everything up, Kelly must pull the ball and run outside, where the linebacker comes up to make a tackle for no gain.

I think we can all agree that this is in fact pass interference.

I mean, you can't expect to win many games when you are given 30 free yards on a drive to possibly win the game, and you false start not once, but twice, on first-and-goal. This is unacceptable.

And yet they get all the yards right back. This is one of the disadvantages of a zone defense. After a while, the zone breaks down, and if the offensive line can get the quaterback enough time someone will be open. On this play, Miles runs a simple drag across the formation, but the outside linebacker on the far side runs downfield with the tight end because it looks like there is no one left on his side. Once Taylor Kelly steps up in the pocket to evade the rush, he has an easy throw to Miles, who turns it up field for an easy 17 yards. This is actually the same play that ASU ran on the play that resulted in a face mask penalty earlier in the drive. ASU clearly saw something they could exploit in the Missouri zone defense.

This is where Arizona State got a little too fancy. Up to this point, Taylor Kelly had completed 13 straight passes. He ended the night with 15 rushes. So why would you bring in a freshman quaterback, who up to this point in the game had been ineffective to say the least (passing for five yards on two completions and running the ball four times for a grand total of minus-2 yards), on the road, against a solid defense? Four-star prospect or not, leave the man who got you up to this point in the game and let him make something happen. ASU runs a simple quarterback counter on the fake jet sweep.

Missouri barely even reacts to the jet sweep and really isn't looking for a passing threat here, and the Tigers are able to stop the play for no gain. Also: Arizona State should have been called for another false start penalty on this play. The crowd clearly was affecting this game.

Who shows up again to make a play for Missouri's defense? Kony Ealy. The tight end to the left side is tasked with blocking down on Kony Ealy and sealing off any penetration. He doesn't have to drive him back, just prevent him from getting into the backfield. Unfortunately, Ealy shoots through the gap left by the pulling tackle and just overpowers the tight end. 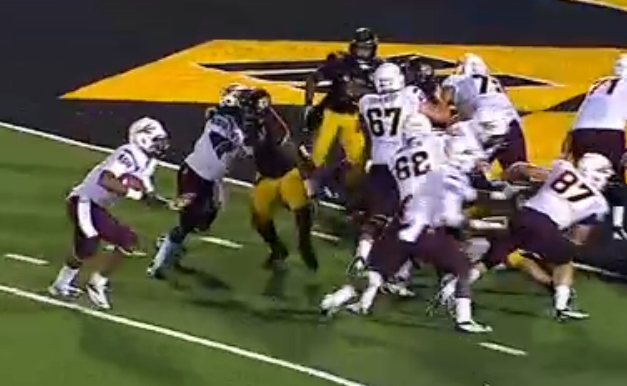 Eubank has no place to go on the QB power.

Arizona State runs a designed rollout to Taylor Kelly's right. It accomplishes the goal of preventing Ealy from eating up the play on the pass rush, but it seems no receivers got open. Because of the angle of the TV camera you can't see what is happening down field but from what I can tell it seems no one is open. (Note from Bill: I'm pretty sure the play was designed to go to Coyle, who torched Illinois on similar, shorter routes the week before. But Mizzou was ready for that, and as Kelly continued to roll right, Tiger defenders made sure the secondary options were also covered. Kelly had made a couple of enormous plays by avoiding tacklers for as long as possible and finding an open receiver as he hit the sideline. But with so little field remaining, the receivers had no room to get open.) Missouri comes up big with the huge goal line stand in the fourth quarter.

Arizona State was almost handed points on this drive. Two penalties gave them 30 yards of field position and 1.76 Equivalent Points. They also almost handed this game right back to Missouri thanks to two false starts on first-and-goal, worth 0.55 Equivalent Points. The pass to Jamal Miles was the biggest play on this drive, and Missouri almost allowed him to get completely into the end zone. But from the 1, thanks to a great play by my new favorite player Kony Ealy, the defense shut the Sun Devils out of the end zone and eventually carried them to a victory with a pick on Arizona State's next possession.