USC At Stanford: The Spotlight Is Squarely On Matt Barkley

Share All sharing options for: USC At Stanford: The Spotlight Is Squarely On Matt Barkley

This Saturday against the Stanford Cardinal, an opponent who has had their number in recent seasons, the USC Trojans looks to come away with their first real statement win of the season. In reviewing the film of each squad’s most recent game, one can conclude that USC quarterback Matt Barkley’s success in throwing down field will be the X-factor in determining a victor.

Coming off a rout of Hawaii in its season-opener, USC traveled across the country last week and put up a less-than-memorable performance against Syracuse. They eventually came away with a 42-29 victory, but there were several factors that led to a mediocre (by the Trojans' high standards) showing.

First, and you cannot say this often when a quarterback finishes a game with six touchdown passes, but Matt Barkley’s play was very, very average. Whether Barkley’s middling performance was caused by his own decision-making or simply the game plan itself, Barkley’s showing last Saturday was one of his more conservative efforts in recent memory. Finishing 23-for-30 looks nice on paper, but Barkley threw for just 187 yards and 6.2 yards/attempt. The numbers alone are tame by Barkley’s standard of play, but things get even more conservative when you dissect the numbers a little deeper.

Seventeen of Barkley’s 30 passes were thrown less than three yards downfield, including 13 that were behind the line of scrimmage. While I realize he has two of the more freakish wide receivers in the college game (Robert Woods and Marqise Lee), Barkley failed to take advantage of their size and speed down the field.

Throughout the entire game, Barkley attempted just three passes that traveled more than 12 yards from the line of scrimmage. On those attempts, Barkley went just 1-for-3 with one touchdown and one interception. His throws looked shaky when attempting go to vertical, but many times it looked as if his eyes didn’t even look downfield.

Throughout much of the game, especially when the score was tight, the Trojans opted to get the ball in the hands of Woods and Lee as quickly as possible and chose not to leave the play-making in the hands of Barkley. The still shots below are an example of one of the low-risk wide receiver screens USC used eight different times throughout the game against Syracuse. 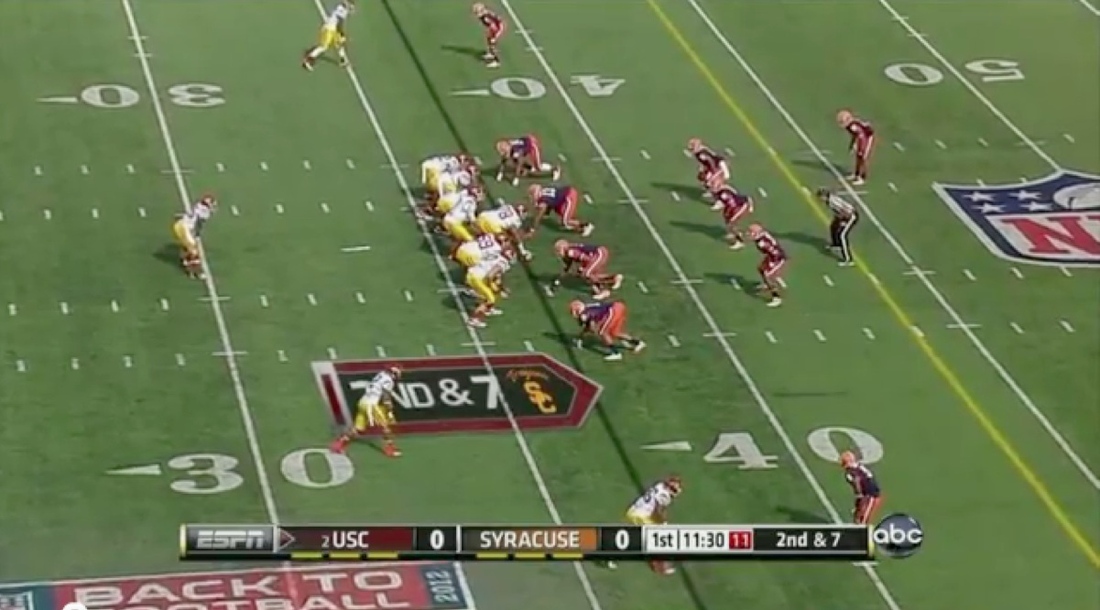 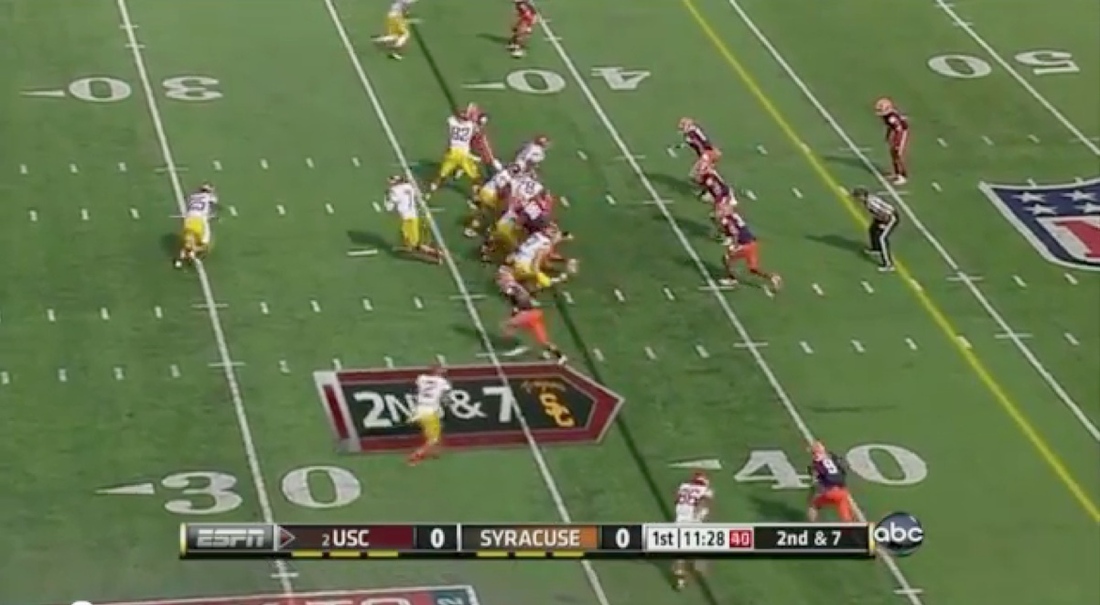 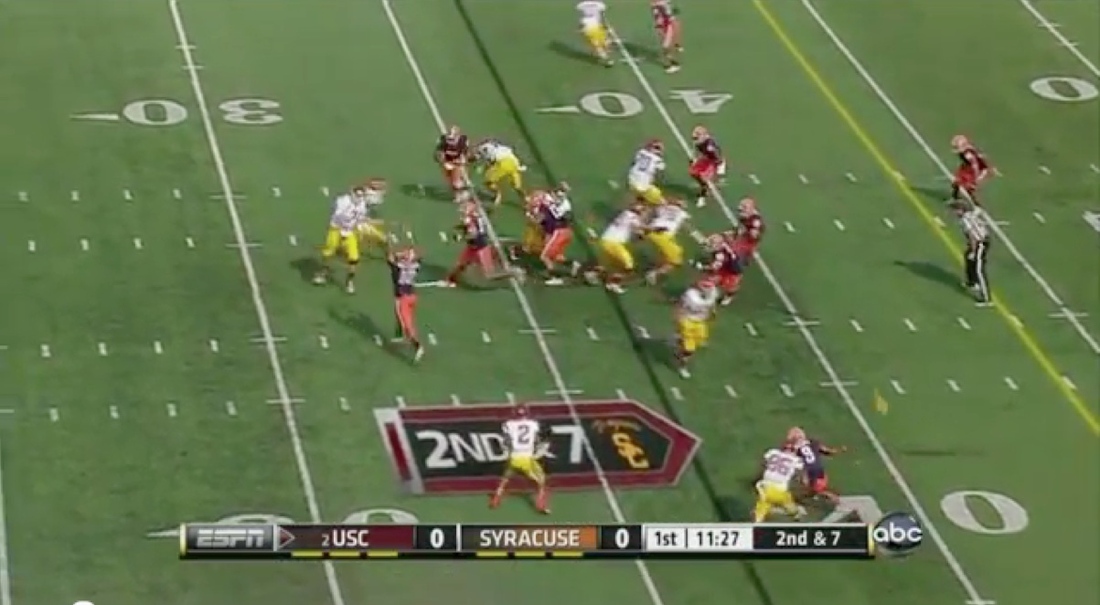 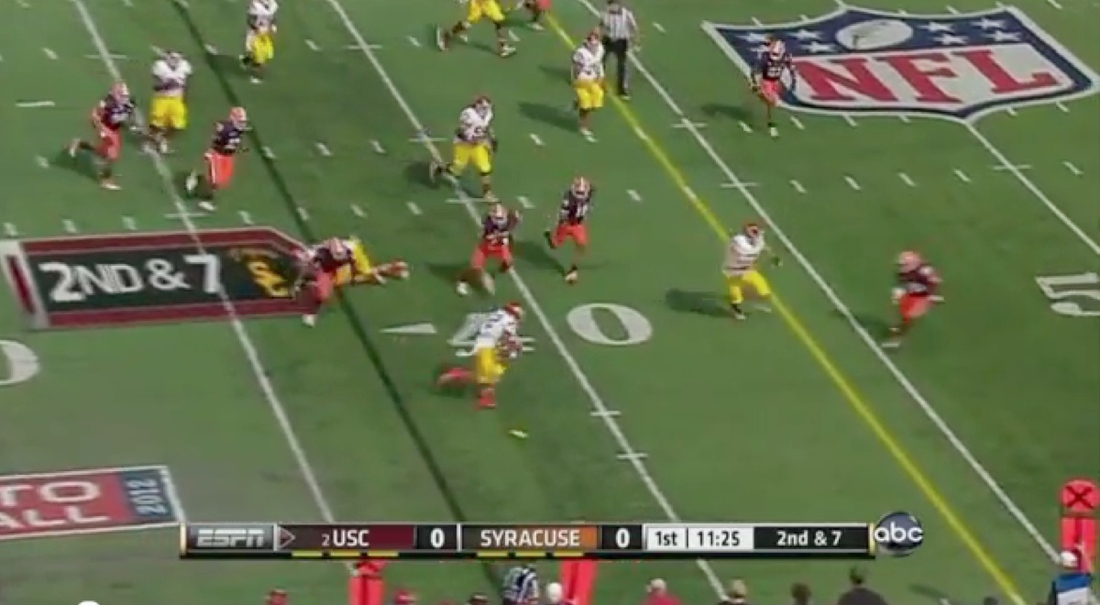 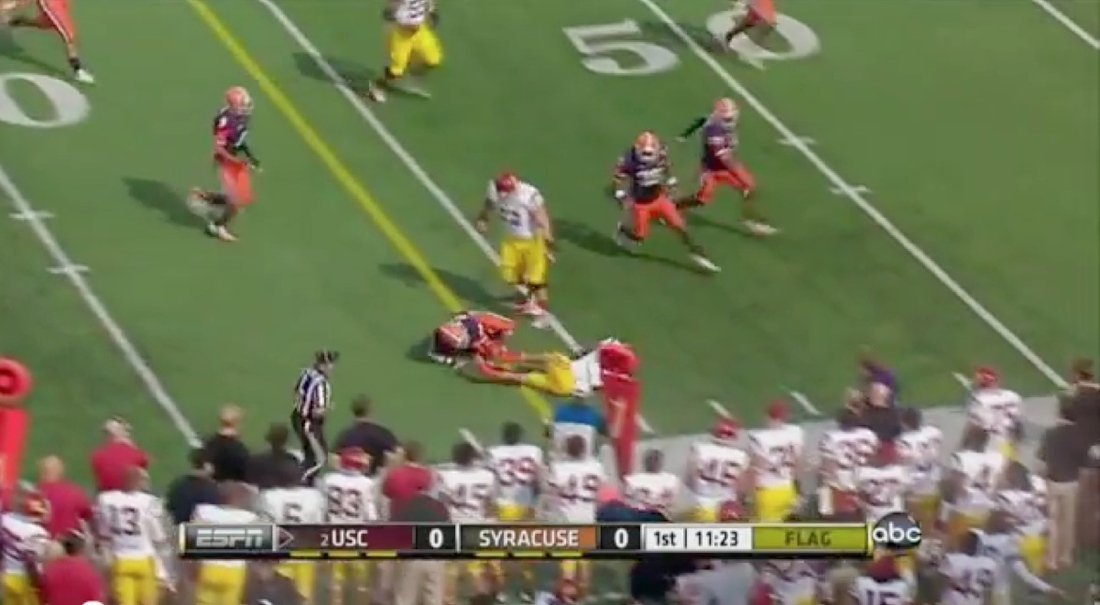 As you can see in the still shots, Barkley fakes a quick handoff to allow the screen to set up before quickly getting the ball into the hands of Robert Woods. On this particular play, Barkley throws the pass three yards behind the line of scrimmage, yet USC ends up with a nine-yard pick up.

On the eight wide receiver screens USC ran against Syracuse, Barkley went 8-for-8 for 66 yards. Generally, when people think of USC’s vaunted passing game, they think of a vertical attack, set up by the play action, that utilizes their big wide outs. But if the game plan against Syracuse is any indication of things to come, the Trojans’ offense has much more of an Air Raid, horizontal feel than a vertical one.

This conservative approach by USC was evident throughout the game. The four times USC faced third-and-10 or more, they threw the ball distances of one, one, and minus-one yards downfield, and Barkley sacked on another attempt. With the potential No. 1 selection in next year’s NFL Draft behind center, such conservative approach is not what you expect to see.

To be fair, it should be noted there is a strong chance USC simply did not want to show too much before this week’s big game against Stanford. But on the flipside, last Saturday’s game was an extremely close one well into the second half, and perhaps this conservative, "Just get the ball to our playmakers in space" philosophy is what the Trojans will hang their hats on this season. Regardless, it is safe to assume USC and Barkley are going to have to be much more aggressive this week against a strong Stanford defense.

Many pundits believe the size and speed of USC’s stud wide receivers will be too much for the Stanford secondary to handle downfield. But if the game against Syracuse is indeed a forecast of things to come, Stanford’s secondary shouldn’t be worried about matching up with USC down the field, instead focusing on getting off of blocks and making sure-handed tackles near the line of scrimmage.

This week, Barkley has an opportunity to make an early statement in the Heisman race. Hopefully for the sake of USC fans, the Trojans open up their game plan and allow Barkley to show off his coveted arm. There is no question that Woods and Lee are going to make plays in Saturday’s game; it’s simply a matter of whether they make these plays behind the line of scrimmage or 20 yards down field. If USC is to come away with a big victory in Palo Alto, Barkley is going to have to complete more than one pass downfield this time around.