Share All sharing options for: The Key Drive: Louisiana-Monroe 34, Arkansas 31

Welcome to the second installment of a new weekly piece at Football Study Hall, The Key Drive. The Key Drive will focus on one drive a week that highly impacted the outcome of a game, essentially the drive that was the key to winning or losing.

Every fall it seems the first couple of weeks of the season are full of boring matchups where an underdog matched up against some powerhouse program is there to simply take a pay check, get beat, and go home. This past week, there were only two games between ranked opponents. But luckily the College Football Gods decided to bless us all with some great games anyway. For The Key Drive this week, we will take a look at Louisiana-Monroe's game-tying drive against Arkansas. This drive featured 10 pass attempts (and six completions) by ULM's Kolton Browning and ended with a 23-yard touchdown strike to Brent Leonard to tie the game with 55 seconds left. Inside we will look at how in the world Arkansas ended up tied with a team they were favored against by 30.5 points.

Related: The Underdog Masterpiece: What's Next For Arkansas And UL Monroe?

Arkansas was on its way to a solid victory after the first half, going into halftime with a 21-7 lead. Even when Tyler Wilson did not return after halftime, Arkansas seemed able to take care of things, scoring six minutes into the third quarter with a touchdown pass by replacement Brandon Allen. From there, though, they ran into trouble. Arkansas did not score again in regulation. In the fourth quarter alone they had three separate 3-and-outs, one four-play drive that ended in a punt, and an interception in their last drive. ULM took advantage and worked their way back to down 28-21 thanks to a lot of passing from Kolton Browning.

ULM lines up with three receivers wide left, one to the right, and a running back in the backfield. This play can essentially summarize the entire drive. Arkansas rushes four and plays either man coverage or a really soft zone. Browning is able to escape the pass rush, extend the play, and deliver the ball to a receiver running away from a defensive back. I can understand Arkansas' rationale for playing soft coverages and not wanting to get beat, but throughout this entire drive they rarely change up their coverage and do not blitz once. Just like last week with Clemson forcing Auburn to run a base package, ULM can simply line up in their five-wide formation and run any number of combo routes because they have a great idea of what Arkansas will be running on any given down just based on how the Hogs are lined up.

ULM begins the play in the formation they will not get out of for the rest of the drive; three receivers to the wide side of the field and two to the short side with Browning alone in the backfield. 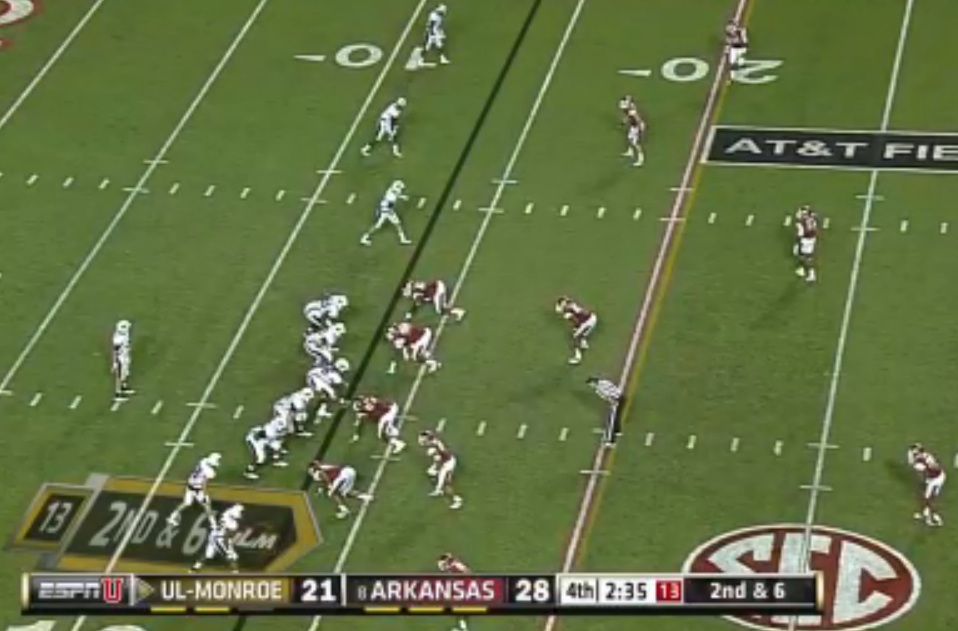 You can see that Arkansas has four defensive lineman, two linebackers, and five defensive backs. With this defensive alignment, one of the wide receivers will have to be covered by a linebacker. Even if Arkansas runs a zone, the linebacker might have to stick on a wide receiver if the QB is able to evade the pass rush and extend the play. Lo and behold, this is what happens. Browning is again able to escape the pocket and throw an easy completion to Harper who is streaking across the field. Harper runs a simple stop route and sits down in a hole in the zone. Once he sees that Browning is rolling away from him he sprints across the field and easily beats the linebacker to an open spot on the field. It's an easy completion if Browning can continually avoid the four-man rush.

It seems Arkansas got super conservative on this drive. Arkansas rushes four again but this time brings a linebacker down into the box to "spy" Browning and prevent him from scrambling around. However this means that Arkansas is manned up on the receivers, and the slot receiver runs a simple out route. It is again an easy completion for Browning. Leonard then makes a nice run after the catch, and poor tackling by Arkansas gives ULM a 27-yard gain on a seven-yard out route. A good quarterback in a pass-first system will be able to find an open receiver most of the time. And Kolton Browning is starting in his third year in a system where he might throw the ball 67 times in a game. I am just confused by Arkansas's defensive play calling.

(Note from Bill C.: the offensive play calling was no less confusing.) 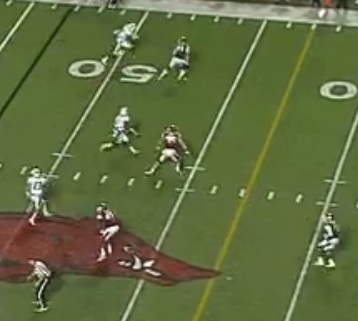 Arkansas now only brings three down lineman on the pass rush. That means they have eight players covering five receivers, simple math should allow Arkansas to spread their defense around to prevent any easy passes. Instead they allow an easy five-yard completion to the flats.

Harper then makes some good moves to get an extra 13 yards after the catch. I just don't know why Arkansas isn't challenging the receivers a little bit more. With three extra defenders you could play some combo coverages, run a pretty wide zone, or at least have more defenders rushing to the ball once the ball is thrown. Instead, Arkansas plays a soft man with too many people in the middle of the field.

Fortune favors the bold, and you can't say ULM wasn't gunning for a touchdown here. A simple streak route on the outside against man coverage with no help over the top from a safety is something that Kolton Browning feels comfortable challenging. This was actually really good coverage by the defensive back. He challenged Maye the entire way up the sideline and forced a throw that had to be on the money to ever have a chance of being caught. Browning throws this in a place that only his receiver could possibly get it and lives to play another down.

Take what I wrote for Play No. 3 and it could apply to this play as well. It seems Arkansas is just waiting for Kolton Browning to make a mistake or bad throw, and he is making them pay the price. Another easy completion on this play.

And here were the mistakes Arkansas was waiting for. On Play No. 7, a bad snap leads to Kolton Browning being rushed and having to essentially throw the ball away in the back of the end zone. Play No. 8 the pass rush finally gets to Kolton Browning and he is unable to escape for a clean throw. A left-hander rolling right is going to have a tough time geting any zip on a ball thrown back left and he just floats this one up to his receiver. This is usually the play where the highly-ranked team on the verge of being upset at home makes some play to seal the game off on the underdog's mistake. Everyone then goes home happy with a win and a vow to work harder from here on out. But it just seems that this win was not in the cards for Arkansas today. Fortunately for ULM, Arkansas drops the sure interception, and ULM is able to run another play. 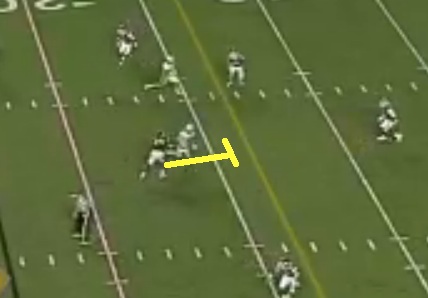 Once again ULM has an open receiver against almost no pass rush. Fortunately for Arkansas, the safety makes a timely tackle, and Leonard can not bring the ball in immediately; he drops it down on his body instead of bringing it into his arms. This is the first time that ULM challenged the middle of the field, and they had an open receiver. The linebacker for Arkansas has got to do a better job challenging the receiver over the middle. You can see in the screen shot the the linebacker is underneath the receiver and to the inside. This forces the wide receiver Leonard to push his route deeper over the middle. From there the linebacker stops pushing the receiver upfield and releases him to the safety to early. Assuming the linebacker was tasked with the middle zone of the field, and the whole drive he was in that zone, he should have turned with the receiver and pushed him upfield for a little longer.

That will shorten the window that Browning has to throw to and gives the safety a lot more help. Fortunately for Arkansas, Leonard can't bring it in. 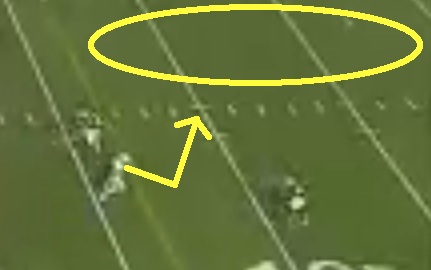 Arkansas's soft coverage finally allows ULM to put it into the end zone. The slot receiver on the short side of the field runs a simple corner-post route where he runs up on the safety, fakes a move outside to the corner of the endzone, and comes back in over the middle.

The safety gets too far turned to the outside considering he has no inside help and can't quite get there to make a play on the ball. A perfect throw and catch gives ULM all the momentum they need to win this game in overtime.

Louisiana-Monroe executed this drive to perfection. They got the ball with 2:55 remaining and needing a touchdown to tie the game. They ran their offense with a little hurry but did not rush anything, and Browning only made one bad decision. No penalties, no sacks, and only one drop on a tough hit are keys to any drive. I think Arkansas got way too conservative in their defensive play calling and was only worried about preventing a huge play. But, ULM's three completions at midfield earned them 2.65 equivalent points. At some point Arkansas needed to make a play ,and they didn't quite get it done. And we didn't even talk about overtime.

** Author's note: Reading pass coverages and receiving routes is really hard to do correctly from a TV broadcast. I absolutely admit I could be missing something or reading into something incorrectly. Feel free to offer you own opinions if you disagree.**