Oregon’s Offense: What Makes Them So Ducking Good?

Share All sharing options for: Oregon’s Offense: What Makes Them So Ducking Good?

Author’s Full Disclosure: As a member of the Arizona State football team from 2005-2009, I played against the Oregon Ducks four times. My teams went 0-4 and were outscored 181 to 77. I am still trying to figure out how to slow them down…

While the spread is the generic term thrown at college offenses that work primarily from the shotgun, it is obvious not all spreads are created equal. Some spread philosophies derive from the run and shoot, while others’ foundations stem from the zone-read. Others even claim to be a hybrid of the two. What is undeniable though, is the impact the spread offense has had on college football over the past decade. More recently, let’s say the past five seasons, no team has run the spread more effectively and more consistently than the Oregon Ducks. So the question then is, what makes Oregon’s offense so darn good?

To simplify the answer as much as possible, in my opinion, there are three key elements to Oregon’s success: 1) Confusion, 2) Space, 3) Athletes.

Oregon is one of those teams that spread the field to run the ball. Since 2007, Oregon has finished sixth, second, sixth, fourth and fifth in the nation in rushing yards per game.

While acknowledging Oregon’s offense is much more balanced than many of the other top-rushing teams, a large part of the Ducks' passing success is due to their ability to set up big plays via the play-action. Plain and simple, Oregon’s bread and butter is its running game. Unfortunately for opponents, slowing down Oregon’s run game is much easier said than done.

There are two layers of confusion Oregon’s offense creates for opponents, one for the coaches and one for the players.

For opposing coaches, one must generally modify what they do best to successfully slow the Duck’s spread – a stubborn Cover-2 or 4-Deep/Quarters team will simply get eaten alive by what Oregon does best. Because Oregon’s quarterbacks are such a running threat, it creates another level of vulnerability the defense must account for. To combat this, most opposing defenses are forced to drop an extra safety into the box to counteract this additional threat.

Unfortunately, such maneuver then leaves one’s pass defense in a state of flux. When an eighth defender is forced to play in the box, it greatly limits the defense’s ability to play a variety of coverages. Variations of a 3-deep zone and/or man-to-man coverages are about the only options. Sacrificing the unpredictability of one’s pass coverage to improve the run defense is a weekly dilemma upon which Oregon’s opponents must deliberate.

The reason you see so many deep pass plays from the Ducks’ offense is because defenses are often in a single-deep-safety formation, thus creating vertical seams for Oregon to exploit. Sadly for opposing coaches, if you want to slow Oregon, you simply have to risk something.

From a player’s point of view, the confusion stems from Oregon’s breakneck pace and ability to adapt on the fly. No matter how much film you watch or how ready you think you are, nothing prepares you for the pace of Oregon’s offense. It is so up-tempo that it seems they almost get out of control at times.

But on the flipside, Oregon’s pace gives the defense little chance to get comfortable in its call or ever regroup after a bad play within a given series. On top of the that, if Oregon gashes you on one play, they will simply line up five-seconds later and run the exact same play again. If a particular defender does not know he was the reason for the previous big play, Oregon will continue to exploit him all the way down the field. Next thing you know, your defense is sitting on the bench listening to Oregon’s fight song while attempting to figure out who wasn’t doing their job. But by then it’s too late.

Defensive confusion stems from Oregon’s ability to think outside the box. Oregon will run things in a way no other team in the nation will.

Within their actual scheme, Oregon does an incredible job of opening up space and running lanes. In my opinion, there is no team in the nation that creates more gaping holes through which skill position players can run. Just look at the still shots below. 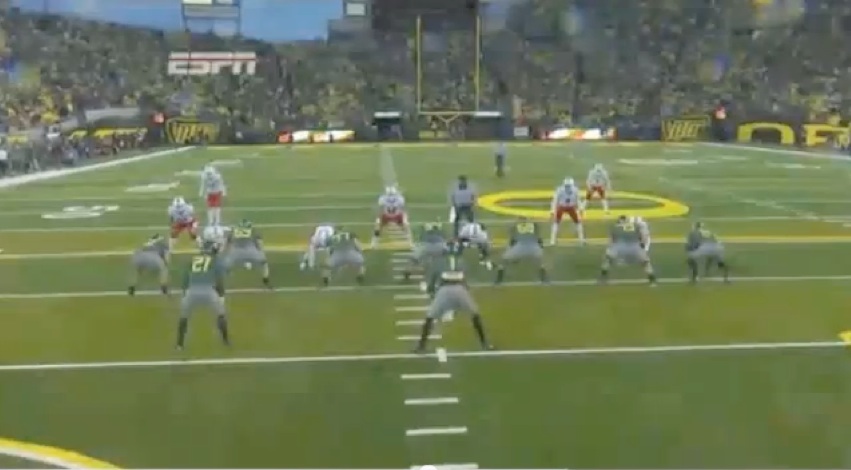 In a 2010 game against Arizona, the pre-snap photo shows every gap filled by an Arizona player. In the second photo, look at the amount of space created just after the ball is snapped and handed off. What started as three feet, quickly became fifteen and is still expanding. 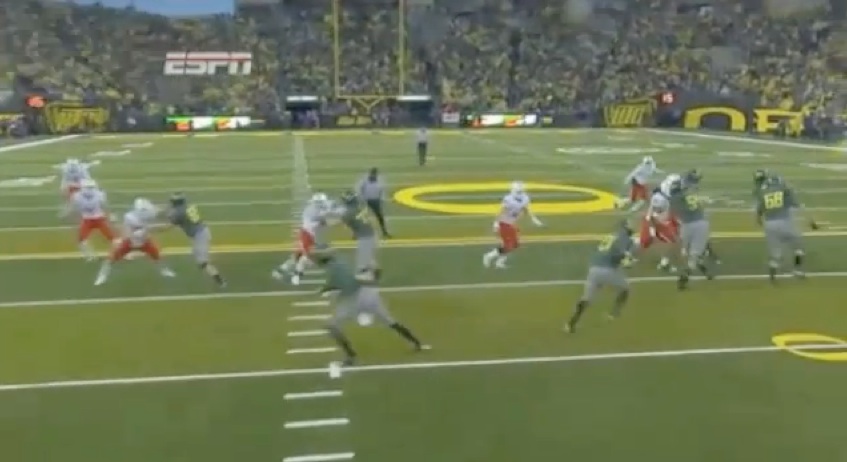 In the second photo, while the Arizona linebacker maintained his gap integrity, he now has the luxury of tackling LaMichael James, one-on-one, in fifteen-feet of space. Good luck with that.

Oregon has had no shortage of elite athletes in their backfields in recent years -- Dennis Dixon, Jonathan Stewart, Jeremiah Johnson, LeGarrette Blount, and LaMichael James, just to name a few. The second photo above shows how important great athletes truly are. From a coaching perspective, if the Arizona linebacker makes the difficult open-field tackle, then he has simply done what is expected of him. But if James makes him miss, and runs until he hits his head on the goalpost, then what is a defensive coach to do?

There is an old saying that goes, "It’s more about the Jimmy’s and the Joe’s than the X’s and the O’s." For Oregon, as dangerous as their scheme is, their lightning-quick athletes almost make it unstoppable. I’m sure if you asked any Oregon coach if they liked the odds of one of their running backs one-on-one against a linebacker in 15-feet of space, they would probably laugh you out of the room.

For a defensive coordinator, your job is to put your defender in the best position possible. It is then up to the defender to make the necessary play. But as the scoreboard generally shows, Oregon’s athletes are simply better than those attempting to tackle them. Advantage: Oregon.

There is a reason the Pac-12 has been unable to slow Oregon in recent years. Across the board, there are simply not enough elite athletes on defense to consistently win these one-on-one match-ups in space. To defend/slow Oregon’s spread, you must combine great discipline with great athletes (see: Auburn and LSU). Because of the way they stretch the defense out, athletically-challenged teams simply can’t depend on ‘flying to the ball’ or ‘gang tackling’ Oregon’s spread.

Looking at Oregon’s cupcake non-conference schedule (Arkansas State, Fresno State and Tennessee Tech) as well as the state of the Pac-12, only one team seems to have the athletes to challenge Oregon: USC. If Oregon is able to get by USC on November 3rd, it seems only an SEC defense may be able to separate the Ducks from a BCS Championship. At this point in time, there doesn’t seem to be anyone else in the Ducks’ way possessing the combination of great discipline and elite athletes needed to slow the Oregon spread.