Bigger, Stronger, and Faster. What About ‘More Disciplined’?

Share All sharing options for: Bigger, Stronger, and Faster. What About ‘More Disciplined’?

Bigger. Stronger. Faster. Bigger. Stronger. Faster. At the end of every season, it seems those three words are endlessly repeated by every coach in the nation. Whether referring to their off-season training goals or what they hope to achieve through the recruiting process, all coaches want their teams to get bigger, stronger, and faster. While a utopian world would give every coach the biggest, strongest, and fastest players, we know that is not reality. But what is often overlooked in this ongoing quest is that simple improvements on the mental side of the game could actually be more beneficial than improvements on the physical side.

One factor that often gets overlooked in the grand scheme of college football is the mental aspect of game. While it is easy to get caught up in how fast a running back can run 40-yards or how many times a linebacker can bench press 225 lbs, it is the players who are able to combine great physical attributes with a strong mental understanding/discipline that truly excel.

In a previous post entitled, Oregon’s Offense: What Makes Them So Ducking Good?, I discussed how it would take a team with both great athletes and great discipline to slow down Oregon’s vaunted attack. In the article, I gave an example of how a well-executed, disciplined defense could still falter if it were unable to win the one-on-one battles between Oregon’s elite ball carriers and an athletically-challenged defender.

But what about the flip side of that argument? Can great athletes consistently overcome a lack of discipline? I believe the answer to be a resounding no.

To illustrate the importance of second part of my opinion (the part stressing great discipline), please take a look at the still shots below: 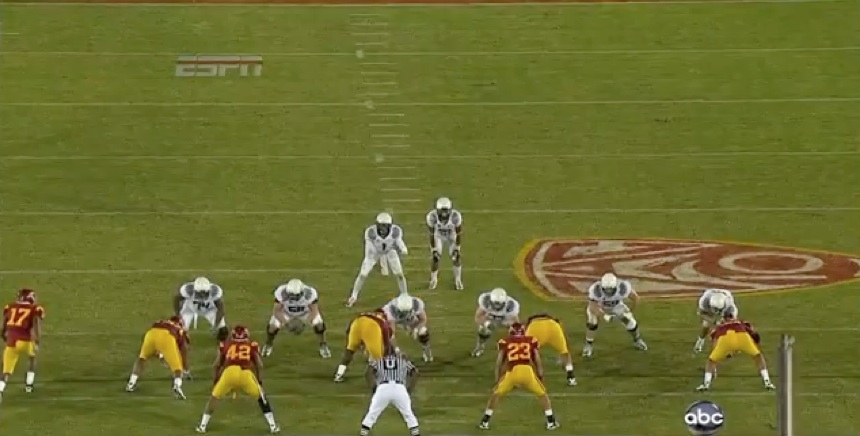 The above photo is a pre-snap shot from Oregon’s 2010 game against USC. As many agree, USC is considered to have one of (if not the) most athletic defenses in the Pac-12 on a year-to-year basis. USC’s defenses are consistently littered with four and five star recruits and future NFL players. But even they must be disciplined in order to succeed…

The focus of this play will be the execution (or lack there of) by USC’s linebackers, #42 and #23. 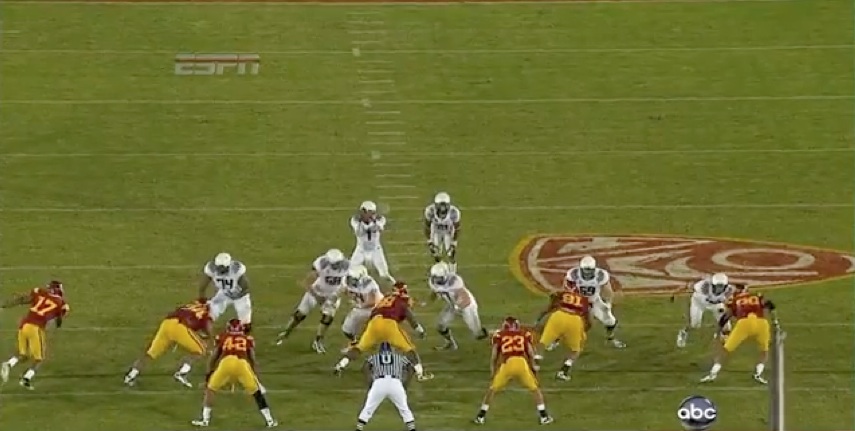 As the ball is snapped, Oregon’s guard pulls to the defense’s right on a typical counter play. If disciplined, #42 for USC should have his eyes on the pulling guard and mirror his movement to the right. Unfortunately for USC, his eyes are not disciplined. 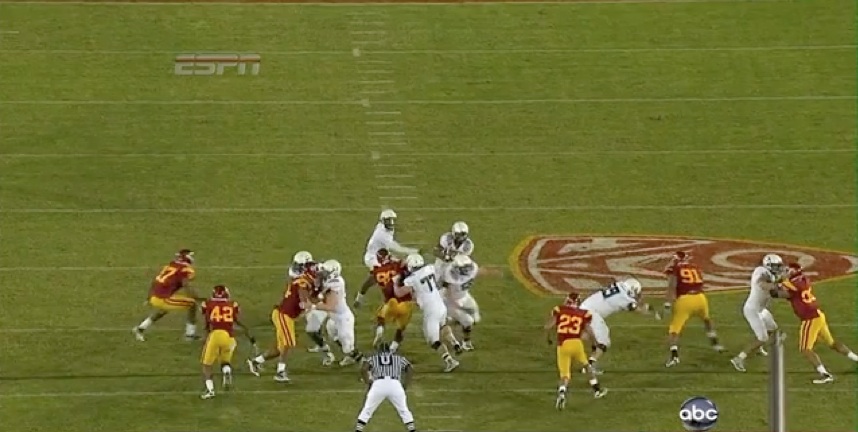 Instead of letting the pulling guard take him right to the ball carrier, #42 for USC breaks outside to an area already occupied by one of his teammates. His fellow linebacker, #23, correctly reads the block down/kick out scheme and triggers downhill to hit the puller and box the ball carrier back to his teammate, #42. Unfortunately, #42 of USC has not been disciplined in his read and is nowhere to be found. 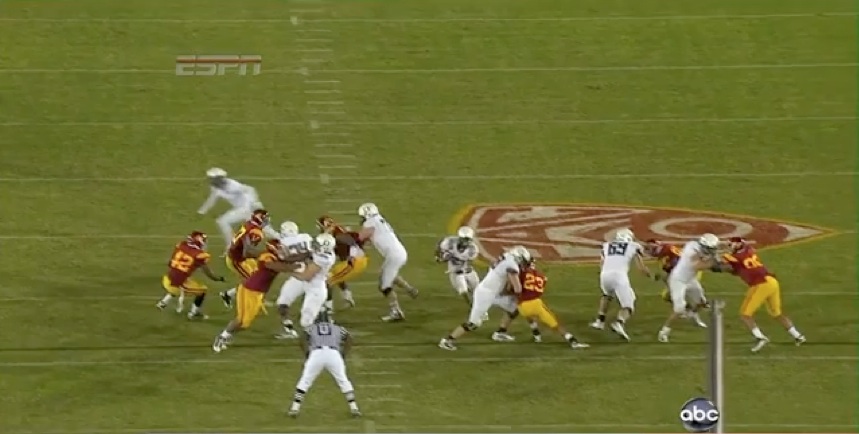 As you can see, #23 of USC clearly does his job and boxes the ball carrier back to where his help should be – unfortunately, his help is five yards out of position and Oregon is about to break a big play. 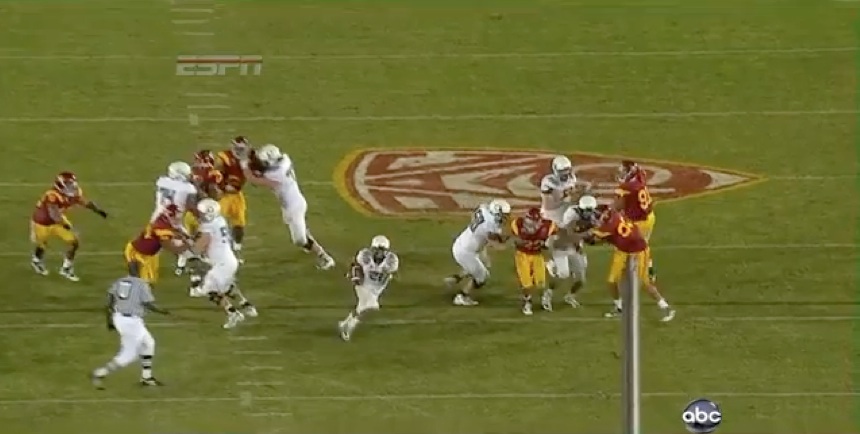 The beauty of defensive football is that is takes eleven disciplined players to execute a given call. As you can see in the above example, if only one of the eleven doesn’t execute his assignment, the whole team is punished. On this particular play, all it took was a single defender to have bad eyes and Oregon was off to the races.

But back to the point of the post – it didn’t matter that USC’s linebacker may be really big, really strong, or really fast, if you can’t combine the necessary mental discipline of the game with the necessary physical ones, football is a very difficult game to succeed in.

Again, it is obvious to assume that every coach would love to roster the biggest, strongest, and fastest players, but in the grand scheme of things, the mental discipline/toughness of an individual is often underappreciated. While there are plenty of players who are either very athletic or very disciplined, it is the great ones who are able blend these two qualities together. With this in mind, it would seem coaches may want to change their off-season ‘mantra’ to Bigger, Faster, Stronger, and More Disciplined.

Author’s Note: I acknowledge the above defensive scheme may have been a zone-pressure by USC where #42 was supposed to blitz the outside. But even if that were the case, in a properly executed scheme, #42 still should have seen the puller, aborted his blitz, mirrored the puller to the right and been the player #23 ’boxed’ the play to. If executed correctly, USC would have likely limited the Ducks to a short gain.