Share All sharing options for: Now Playing: Arkansas At Tennessee (1998) 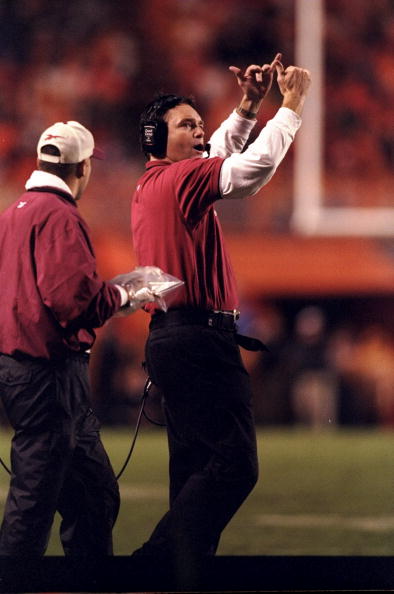 14 Nov 1998: Head coach Houston Nutt of the Arkansas Razorbacks gestures from the sidelines during the game against the Tennessee Volunteers at the Neyland Stadium in Knoxville, Tennessee. The Volunteers defeated the Razorbacks 28-24.

This truly was one of the biggest gut-punch near-upsets in college football's history. Arkansas did not luck into a lead against No. 1 Tennessee on November 14, 1998 -- they completely and totally outplayed the Vols. And then they lost anyway. I said in talking about Alabama-Mississippi State 1992 that every national champion probably needs a little luck along the way. Tennessee in 1998 is no exception.

This was Game No. 2 of what was one of college football's craziest months. Tennessee reached No. 1 after Ohio State was absolutely shocked by Nick Saban and Michigan State at home, and they tried their hardest to relinquish the top spot immediately. A few weeks later, No. 3 UCLA lost to an unranked Miami team, and No. 2 Kansas State famously lost to No. 10 in the Big 12 title game. Florida State, ranked fifth in mid-November, ended up squeaking into the Fiesta Bowl title game against the Vols. One of my favorite seasons.