Share All sharing options for: The Reading Room: College Football 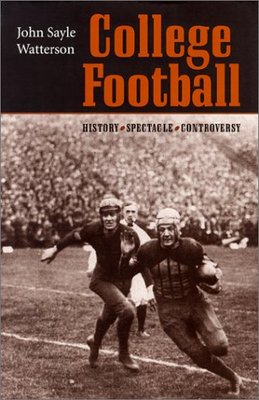 On Nov. 6, 1869 Rutgers and Princeton faced off on College Field in New Brunswick, NJ for a game that would be immortalized as the first intercollegiate football contest ever held. Hearing the hullabaloo after one of the scores an anonymous Rutgers professor waved his umbrella at the participants and shrieked, "You will come to no Christian end!"

Thus, from the very start, football found itself beset by critics in the face of its overwhelming popularity. Of course, the sport and those involved in it certainly did their level best to warrant such complaints as the rapid growth of the game begat a multitude of excesses that continues unceasingly to this very day.

The inherent contradiction of a highly lucrative, semi-professional sport being played by ostensibly amateur participants under the guise of furthering their education has created an unceasing controversy about college football. The discussion about the sport, from its earliest days, has always been as much about the performances on the gridiron as it has been about the scandals perpetrated off of it.

While there are countless books about particular controversies and eras of excess it was not until John Sayle Watterson’s 2000 book, College Football: History, Spectacle, Controversy, that we were provided a comprehensive examination of the conflicts the sport has grappled with over the whole of its history.

This book looks at everything from the debate over tramp athletes in the late 1800s, the furor over player injuries at the turn of the century, the conflicts about participant subsidies in the 1920s. As television upped the ante

Watterson argues the sport suffered three great upheavals: the clash about player safety that lead to the revision of the rules in the early 1900s, the scandals over subsidies in the 1950s and the lawlessness of programs in the 1980s and 1990s fueled by ever increasing television revenues. All of these, he contends, led to substantial reforms that restructured the entire landscape of the sport.

College Football is an illuminating book for three reasons. First, it provides fantastic detail into a host of episodes in the sports history rarely examined in a comprehensive manner. Second, it shows that game is far more resilient than any of its most vehement critics give it credit for – including Watterson. Thirdly, College Football gives an insight into past episodes of the sport’s history that can sometimes shed new light on current controversies.

An example of the last are the questions the game faces today concerning concussions and their effect on the health of the players is very similar to the criticisms of football at the turn of the 20th century. The alarming number of injuries and fatalities led to pressing criticisms and calls for reform that went up to the president of the United States himself, Teddy Roosevelt.

The game’s organizers were eventually forced to address the concerns and the changes dramatically altered football by the creation of what would become the NCAA and the legalization of the forward pass. The first led to a standardization of the game that helped it spread further and the latter led to even more interest due to the more exciting style of play.

As troubling as the current issue with traumatic head injuries may be, a compelling and reasonable solution to the crisis may also hold the key to football’s future. And, as the past ably demonstrates, that’s not necessarily a bad thing.

Without a doubt, Watterson is one of the most cynical chroniclers of the football’s history you are likely to find. He describes himself as a "historian of football crises" and does his level best to live up to the title. Throughout College Football muckraking sources are given heavy play while more sanguine views tend to be marginalized.

In Watterson’s view, college presidents and faculty wage an unending war to wrest control of the game from forces seduced by the profits the popularity of the game begets. College football, in this portrayal, is an anathema to higher education which is underscored by the fact more intellectual institutions eschew its pursuit.

This is certainly an arguable point but not necessarily a blindly acceptable axiom. But make no mistake, this book is required reading if you care at all about the sport. College Football, ironically, is an incredibly instructive resource because of Watterson’s puritan fury at the game.

Any reasonable observer will agree that college football has been plagued by excesses and scandals that do seem to recur during periods of increased popularity and, more to the point, profitability. Watterson’s research is invaluable as an account of these crises and how they have affected the evolution of the game.

One of the most enlightening examples is Watterson’s account of the College Football Association revolt in the mid 1970s. In many ways, the modern game as we know it was created by the CFA’s battle with the NCAA but there is remarkably few detailed accounts of how the conflict unfolded.

The CFA came about when schools with prominent football programs balked at the NCAA’s proposal to divide television proceeds across the entire association. The NCAA’s contract with ABC Sports at the time gave them control over what teams saw airtime. A proposal to split the profits across the entire association brought criticism from schools that provided the bulk of the television coverage.

Initially, the CFA was created to form a separate, elite division within the NCAA made of up the big football schools where the profits could be more fairly distributed. What it became was the tool that busted the NCAA’s control over television rights when the US Supreme Court ruled the organization in violation of the Sherman Antitrust Act in 1984.

Watterson’s account of this is detailed, enlightening and probably the most comprehensive overall account of the complicated episode that didn’t finally come to an end until 1997. It makes clear is not only did the CFA revolt lead to conferences and individual schools gaining control of the contracts with networks, it also created a ripe atmosphere for the proliferation of additional networks, particularly those on cable which emerged during this same era.

What is left unsaid is how the CFA episode dramatically transformed the makeup and relationships between the major conferences and opens a very interesting question as to how much of the recent realignments can be traced back to it.

One of the most amazing aspects of college football is it's remarkable resilience. That so much of the game has been preserved despite the battle between its most hardened critics and unapologetic apologists is probably accountable to the fact it provides a plenitude of grist for their particular mills. And although he dismissed its importance, even Watterson has to confess to a certain romantic nostalgia for the game and has to admit "the fact remains that football between two major teams in a large stadium has no equal."