Share All sharing options for: The Reading Room: Ninety-Nine Iron 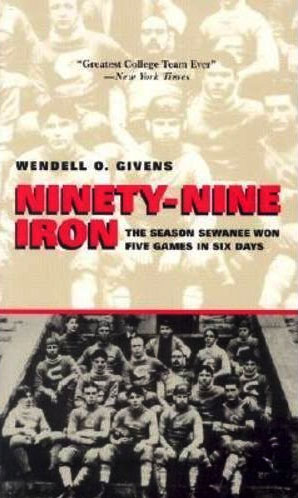 It is a feat that will never be equaled. In 1899 the football team for the University of the South traveled 2,500 miles and played five games in six days. Sewanee not only won every one of the contests, they were not even scored upon.

In fact, the Sewanee team of 1899 was one of the greatest of its era and arguably of all time. The team from central Tennessee won all of their 12 games but one by shutout and outscoring their opponents 322-10.

The accomplishments of this storied Mountain Tigers squad are recounted in Wendell O. Givens' book Ninety-Nine Iron: The Season Sewanee Won Five Games in Six Days. The late Givens, a former editor of The Birmingham News, first published this slim tome in 1992 and it was reissued in 2002.

The book certainly seems like one penned by an editor. It consists of a description of the difficulties in collecting information about the legendary team and the accounts of the game rely heavily on the newspaper reports themselves. Ninety-Nine Iron provides basic narrative context for Sewanee's 1899 season but leaves most of the conclusions about the facts to the reader.

What is fascinating about the account is stepping back from seeing it as a nostalgic tale of an era long past and recognizing it for what it was, the story of a powerhouse football program at the height of its powers. Sewanee football at the turn of the century dominated the southern game and operated like such teams do today -- with an eye on the bottom line.

By the late 1890s, most of the southern college football teams we recognize today had been established but few had developed beyond the most rudimentary degree. Sewanee was the exception. The school's 300 or so students were among the South's most privileged and, as such, exemplified the elite social group that the game first represented. It would not be until after World War I that the game would begin to become an entertainment of the middle-class.

Sewanee practiced a number of tactics that were highly controversial at the time including paying the head coach and offering scholarships to standout players. It's roster was made up of players who hailed from across the region and even beyond the borders of the south.

The incredible week-long train tour was the brainchild of team manager, Luke Lea, whose actual role, Givens notes, was much more akin to an athletic director. As impressive as the story of the epic journey has become, Lea clearly understood the bottom line when he organized it. When he cancelled a contest against intra-state rival Vanderbilt due to a dispute over the share of the gate receipts the next option was a train tour.

In the era before radio and television teams made their money through the gate. For a school as relatively remote as Sewanee the only way to capitalize on that was by traveling to bigger venues in urban areas. Sewanee's epic week long road trip was just one example. In 1899 Sewanee also played a game in Montgomery, Alabama and three contests in Atlanta, including a pair of games in three days to start the season as well as the "Southern Championship" to close it.

In Pennsylvania, this same logic had propelled Pop Warner to begin transforming the Carlisle Indian School into a dominant program that functioned almost exclusively as an exhibition team.

So how momentous was Sewanee's accomplishment? Was it a whirlwind tour against teams who would only become powerhouses in later decades or was it truly a odyssey of gridiron endurance against the best the game had to offer?

To normalize the accomplishment of the 1899 Sewanee squad I put put together this graph of their record along with the final record of their opponents available through College Football Data Warehouse. The famed road trip is highlighted in grey:

As grueling as the travel schedule was for the team, Lea set it up in the most favorable manner possible. It was heavily front loaded and gave the team a significant break in the middle.

Sewanee's first two opponents, Texas and Texas A&M, were the only two teams on the five-game slate that would end the season with winning records. Sewanee's wins against them are further legitimized by the fact the Tiger's points would be the most by any opponent against the two Lone Star State teams all year.

Next the schedule gave them a creampuff, Tulane, and then the road trip's single off day. The respite offered a chance to recover somewhat before heading out on the return swing against a weak LSU squad and a mediocre Ole Miss team. Obviously, the difficulty of these final games was magnified dramatically due to the toll of daily contests and the sheer amount of miles the team traveled.

Looking at the overall schedule it seems that as amazing as the November road trip might have been the fact is the rest of the schedule was legitimate as well. There were three cupcakes -- Cumberland (yes, that Cumberland), Southwest Presbyterian (Rhodes) and a godawful Georgia Tech squad -- but also three very good teams -- Tennessee, Auburn and North Carolina. Georgia was a bit sub-par in 1899 with a pretty solid defense but an offense that only seemed able to score against the worst teams on the slate.

The test of the Ironmen team was the final two games against Auburn and North Carolina. While John Heisman's team from the plains only played five games in 1899, the Plainsmen were not scored on by anyone else that season. The only other blemish on Auburn's record was a scoreless tie with Georgia -- a squad Sewanee had downed decisively to start the season.

In Ninety-Nine Iron you see Heisman at his irascible best. Sewanee was a burr in his saddle during his stay on the Plains and 1899 was no exception. Convinced his Auburn squad had outplayed the Mountain Tigers, Heisman charged the officials with incompetence and claimed their calling the contest on the account of darkness cost his team the game. The account of the back-and-forth between Heisman and the head official in Ninety-Nine Iron demonstrate that disputes about officiating are nothing new to the sport.

And the final game of the season, a matchup with North Carolina is also instructive on how little has changed about the game. The Auburn game was the last of Sewanee's "regular" season but Lea reached out to the Tarheels and arranged for an extra game between what observers believed were region's two strongest squads.

The game, to be held in a neutral location, would, by agreement, decide which team would claim the title of "Southern Champion." In this respect it marked one of the earliest post-season contests that would grow in popularity and become entrenched as the bowl system.

So Sewanee took one more train ride and defeated North Carolina 5-0 in Atlanta to finish their legendary 1899 season and claim the title of the Southern Champion.

"If the Bowl Championship Series (BCS) had been in effect in 1899, there seems little doubt Sewanee would have played in the title game," the late Joe Paterno once said. "And they wouldn’t have been done in by any computer ratings."