Share All sharing options for: The Reading Room: Reading Football 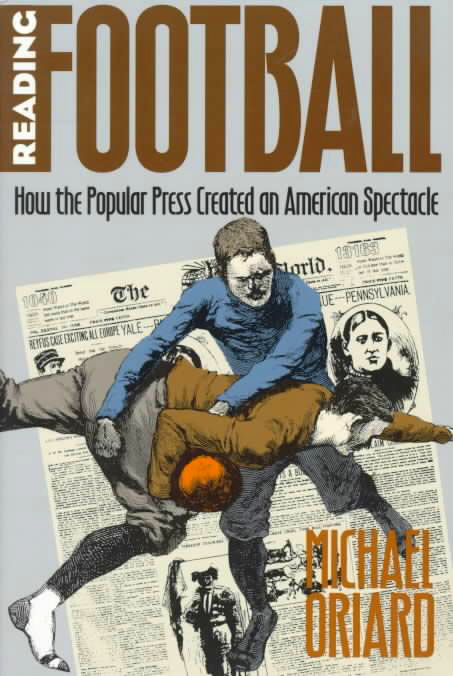 As a cultural force, few things are more uniquely and powerfully American than football. Today the game easily the nation’s preeminent sport and its wild popularity seems impervious to challenge any time soon. So it is a little astonishing to find a dearth of serious examination of why this is the case and what it might suggest about us as a people.

For the most part, the public’s preoccupation with football tends to be confined to the game and its constituent elements themselves. There are occasional opinion pieces pondering how developments in the sport apply to the culture at large, but these tend to see the game as symptomatic of some specific issue (and almost always negatively).

The deeper philosophical question of what the game actually says about the society itself has tended to go unasked.

That changed in 1993 with the publication of Michael Oriard’s book Reading Football: How the Popular Press Created an American Spectacle. Rather than a history or analysis of the game itself, the book marked the one of the first times the game was looked at from an anthropological standpoint. Oriard asked what the game said about us as a culture, and the answers were somewhat surprising.

The role of the media, Oriard argues, is actually the primary factor in the sport’s emergence as a "popular spectacle," not the game itself. Thus the narratives through which the game was experienced emerged before the public became intimately familiar with the sport. Football was only able to unlock its potent cultural significance through its representation in the media.

The question of football's more profound meaning has been the constant theme in Oriard’s academic career. Today he is the Distinguished Professor of American Literature and Associate Dean of the College of Liberal Arts at Oregon State. He also pens a regular column on Washington Post’s football blog, The League.

His interest in football didn't come out of nowhere. In the late 1960s, Oriard was a walk-on center at Notre Dame who snapped the ball to Joe Theisman during their time in South Bend. In 1970 he joined the Kansas City Chiefs, where played for four seasons. He finished his football career with the Canadian Football League’s Hamilton Tiger-Cats.

While the on-the-field bona fides certainly add an air of legitimacy to Oriard's work, it is actually ancillary to his scholarly accomplishments. He was a finalist for a Rhodes scholarship and earned a Ph. D from Stanford in 1976 (which he pursued while playing professionally).

As a former participant of the game and a trained academic, Oriard began asking pretty profound questions about football’s meaning which, surprisingly, had gained scant attention before him. The result was Reading Football. The book outlined his findings by looking at the growth of the game from a relatively limited athletic endeavor played at a handful of schools to a full bore media spectacle. Roughly the period from 1890 to the advent of World War I.

The function of football, Oriard argues, is to tell stories. It does that is a "real" way that almost no other type of narrative can match. That reality is what gives football an immense amount of cultural power. And that culture, in turn, can be examined through football due to the immediacy of the relationship.

Football is a text in which the social and political and economic histories of our century are written indirectly, not altogether consciously. A cultural history of football would not reveal what Americans have openly proclaimed about certain fundamental issues of their time, but it would perhaps bring us closer to their deepest responses to them.

This makes the means of how these stories are told of paramount importance. And it is not by accident that the game emerged as newspapers became an immense popular force. While it took some time for the medium to turn its gaze to the intercollegiate athletic activity, when it did it was with a vengeance.

That gives the cultural anthropologist an enormous opportunity to examine the culture of the past on its own terms, Oriard argues. By reading the media reports of these contests were are, in an important way, experiencing them just as the contemporary public did.

So while a person might have a unique narrative for the game they personally attended, even that still exists within a broader cultural interpretation. They would still have read the newspapers to learn of the rest of the games played and placed the contest they saw within that larger context. It is this that gives the sport a wider cultural gravitas and it's ongoing popularity is a testament to how compelling that perception really is.

If a researcher approaches this comprehensively, as can be done with this early era of the sport where there were a limited number of media to examine, there are significant insights into both the culture of that time and the development of the game itself. And with Reading Football, Oriard set out to do just that.

So what does any of this mean for us today and the game as we know it? Football has changed substantially in the past century, and the media through which it is experienced has done so even more. It is virtually impossible to do a comprehensive anthropological analysis of football today due to the sheer volume of media that is commenting on the sport, Oriard says.

Yet, the fundamental relationship of the game to the public and the cultural importance that gives football hasn’t changed at all.

There are two important implications I can see from all of this. The first is that the continual discourse concerning the game we find ourselves buffeted by isn't about finding a resolution to whatever particular issue it finds itself concerned with at a given time.

From the major topics, such as the need of a playoff and the sanctity of amateurism, to the individual ones such as the focus on a specific player or team, we are never going to reach an ultimate conclusion no matter how "obvious" the answer is to that beefy guy bellowing into the microphone on your radio.

Instead, the importance of football is in the power of the continuing discussion to hold our attention because it speaks to more basic concerns within us individually and as a populace.

Secondly, football is likely to continue to hold this ability to command our attention as long as our culture is consumed with the ideas it exemplifies. The sport will wane and be replaced by something different when those mores alter on the broad scale. It's decline, when it comes, will be the first clue of a far broader social change and, inevitability, future scholars will look back at the sport to clues to how it came about.