The Reading Room: Carlisle vs. Army

Share All sharing options for: The Reading Room: Carlisle vs. Army 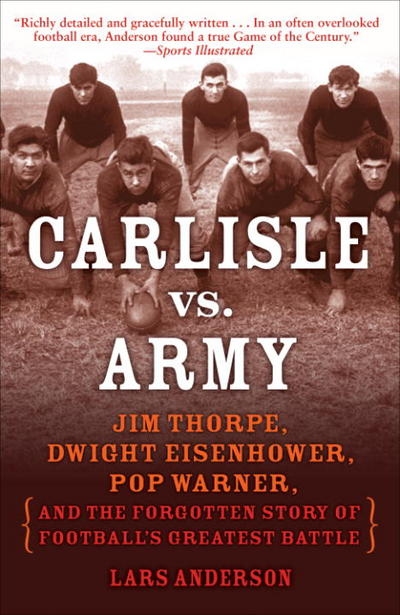 Almost a century ago college football witnessed one of the most compelling clashes in the history of the sport. On Nov. 9, 1912 the Carlisle Indian School Indians face the Army Black Knights on Collum Field at the US Military Academy at West Point.

Lars Anderson’s 2007 book, Carlisle vs. Army, outlines the transformation of the Indian school squad into a national football powerhouse and its great star Jim Thorpe. At the same time the book sketches the development of the Army Black Knights team, focusing on the fortunes of linebacker Dwight David Eisenhower from Kansas.

At the center of the book is Glenn Scobie Warner, best known by the sobriquet "Pop," who is rightfully hailed as one of the game’s earliest innovators.

Warner’s fertile imagination produced mainstays of the game as the three-point stance, the tackle-eligible pass and the double wing formation. He also was notorious for gadget plays that exploited the rules’ many loopholes.

Yet, his philosophical approach wouldn’t be out of line with many teams today. Rather than rely on brawn and power to carry the day he saw the opportunity for speed and deception as a winning strategy. At Carlisle he stumbled on the perfect athletes to carry out his vision.

Warner led Carlisle on the first cross-country road trips and was the first to employ a media relations team to drum up interest. Reading Carlisle vs. Army it becomes clear that Warner also pioneered many of the sport’s less attractive measures; skyrocketing coaches pay, sketchy recruiting practices and, basically, the creation of the first "football factory" school.

All this would suggest Carlisle vs. Army is a feast for the college football fan. Sadly, no. There are a few problems with the style of the book. First, the author’s addiction to needless descriptive adjectives would bring first-year creative writing class teacher to tears. Second, the amount of speculative narration is simply appalling for a book purporting to be any type of historical account.

Page after page you are told exactly what the characters are thinking and their every action is outlined in bizarre imagery. And there is an incessant hammering of the theme that becomes downright irritating after awhile. A single example:

"The matchup (against Army) was so rich in symbolism – the Indians, wards of the state, playing against the young men who would one day rule that state – that it was hard for the Carlisle players to concentrate."

After awhile, the reader begins to really doubt any of these claims can be reasonably attributed to the actually people and events being described. As compelling as I found the story, finishing the book was a real chore. 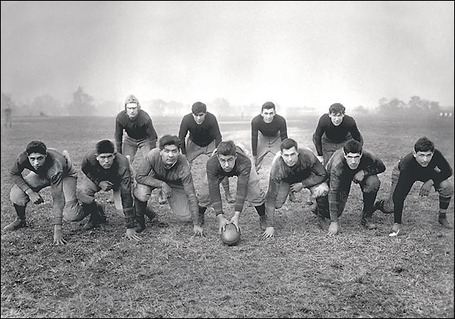 Which is a shame. There’s a lot of potential here both in terms of reporting and writing but perhaps Anderson would have been better served by a more stringent editor and making the story a long magazine piece. His instincts about the 1912 contest are certainly dead on. It was a matchup dripping in irony and fateful coincidence that begs to be told.

The game offered a contest between a team of Native Americans versus a squad representing the institution that led their people bloodily into captivity less than a generation prior. One sideline boasted one of the most talented players ever to grace the gridiron but who was shackled by a perplexing lack of motivation. The other side of the field had a young man whose determination allowed him to reach beyond his limited athletic skills.

Thorpe was one of the biggest celebrities in the country at the time due to his dominating performance in the 1912 Olympic Games but went on to obscurity after scandal swallowed his fame. Eisenhower went on to be one of them most important men of the 20th century and the contest became a footnote in the story of his career.

Anderson only briefly touches on the controversies that eventually shuttered the school. In 1914 a detailed congressional investigation uncovered evidence of systematic abuse of the students and extensive financial mismanagement. The football squad was essentially a traveling road show with the intention of bringing in as much money as possible. Those findings and the inability to reform the school led it to be shut down in 1918.

As much as college football has evolved in its almost century-and-a-half existence, the sport’s development has shown a remarkable amount of consistency. And where Carlisle vs. Army succeeds is painting a portrait of a sport from a century ago and demonstrating how close the issues surrounding it are to the modern game. Where it falls short is illustrating where the failures of that era cans serve as lessons for today.