The Reading Room: The Wow Boys

Share All sharing options for: The Reading Room: The Wow Boys 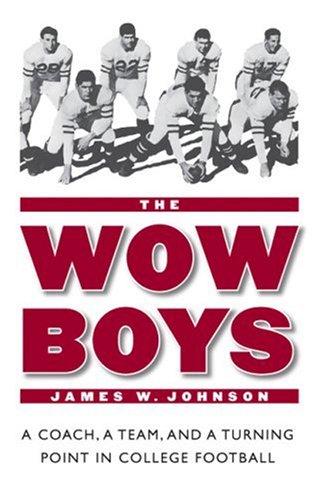 In 1940, Stanford shocked college football by coming out of nowhere to rip off an undefeated season and claim the national championship. The Indians, as the team was then known, started the season a lightly regarded unit with a has-been coach starting his first year at Palo Alto. Instead, they became known as The Wow Boys and their success changed football forever.

James W. Johnson’s 2006 book on 1940 Stanford team The Wow Boys: A Coach, A Team, And A Turning Point In College Football outlines this miracle season and explains why it was so fundamentally important for the evolution of the game. The Indians remarkable season introduced the modern T-formation to college football and their success launched it on a course to offensive ubiquity.

It’s one of the great rags-to-riches tales of college football. A storied program fallen into mediocrity and a coach whose recent history left a lot to be desired. Clark Shaughnessy's seven-year stint at University of Chicago had resulted in a 17-34-4 record and ended when the school nixed the football program. Hopes weren’t high when he arrived at the Farm.

Except he didn’t. By the second game of the season they were being called the Wow Boys and by the end of the season they had proven worthy of the moniker. The Indians (as the Cardinal was then known) went undefeated and beat Nebraska in the Rose Bowl 21-13.

Also undefeated Minnesota was chosen as the National Champion but it wasn’t unanimous; 44 of the 109 poll voters chose the Indians as the nation’s best team. Yet Stanford’s success was electrifying enough to ignite interest in the unorthodox offensive attack the Indians employed – the T-formation.

Shaughnessy’s T-formation proved to be a revolutionary change for the game. It marked a stark divide between the previous era of power offense that gained yardage by sheer mass and the modern game with its premium on speed and skill. But it wasn’t new. Walter Camp reportedly created it in the 1880s but formations such as the single wing and the various box systems had relegated it to obsolescence.

Shaugnessy recognized that attacking the defense directly was playing to its strength. Unless a team had stockpiles of talent, which his didn’t, it wasn’t likely to succeed with consistency. The alternative was to employ an attack that used the entire width of the field to spread the defense out. This opened up opportunities for his speedy backs to make big gains.

"Instead of threatening a segment of ground scarcely wider than from end to end," Shaughnessy wrote of the offense Esquire magazine. "We threaten continually the entire width of the playing field."

The Indian’s success was just one front in Shaughnessy’s attack on football’s conventional thinking. He had developed the foundation of the strategy while coaching at the University of Chicago. During that time he helped Chicago Bears owner/coach George Halas develop the dynamic offensive attack for the pro game. When the Bears won the championship in 1940 as well, the T-formation revolution was on.

While offensive and defensive strategies in football tend to progress by evolution there have been a few moments when a certain approach prompted a full scale "paradigm shift" is how the game was played. The forward pass was certainly one of these (although that emerged from a specific rule change) and the T-formation as envisioned by Shaughnessy is a very good candidate for another.

Yet despite the miracle year that marked the formation’s arrival, Johnson shows how the T-formation was actually the result of years of trial and error. Shaughnessy had the sympathetic ear of Halas who had familiarity with the offense from his time as a player for the University of Illinois. Illini coach Bob Zuppke used the formation and his successor Ralph Jones added the man-in-motion element. 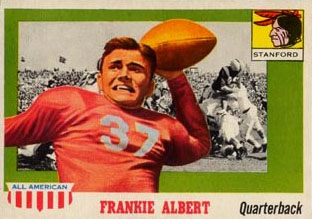 Shaughnessy upped the stakes by adding brush blocking – asking the linemen to make an initial contact with a defensive man and then shifting to take on a second defender. The quarterback then turned his back to the defense to hand off the ball to one of the three running backs. The quick blocks created a series of holes in the line and the hesitation by the defense trying to determine which player had the ball sealed the opportunity.

Freezing the blockers also added a powerful punch to the passing game which keyed off the man-in-motion. And just when a defense felt they had seen everything Shaughnessy’s offense could throw at them, he’d run a counter the other direction of the man-in-motion.

What really made the scheme successful both in Chicago and Palo Alto was the fortuitous arrival of the perfect personnel to make it work. Chicago obtained Sid Luckman whose shifty speed and accurate passing were the perfect complement for the T-formation’s attack. Stanford’s Frankie Albert proved to possess the same skill set and an instinct for finding the defense’s weakest point. Prior to the T-formation, the quarterback was just another man in teh back field. Luckman and Albert were the first generation of the signal caller we recognize in the game today.

Stanford and Shaughnessy never could recapture the magic of that 1940 season but by that time the genie was out of the bottle. The T-formation had arrived. Within a decade three fourths of college football would be using the attack and it would remain the dominant force in football well into the 1970s. While it waned significantly after that as defenses made improvements to counter its strengths but by that time it had morphed into the pro set that has since mutated into the complex offenses we see today.