Anatomy of a sack: The Green Dog

The next time you see a well-coached defense get a sack, carefully watch the replay and see if a Green Dog was involved. When watching elite defenses like Alabama and LSU, I bet you’ll be shocked at the amount of sacks that are made by defenders who weren’t even the primary blitzers in the original scheme.

Share All sharing options for: Anatomy of a sack: The Green Dog

It goes without saying that not all sacks are created equal. There are times when a breakdown in protection leads to a sack. There are other times when a blocker simply gets beaten by a pass rusher. But the hardest type of sack for placing blame occurs when the reason for the sack was a Green Dog.

A Green Dog can also known as a blitz-and-engage depending on the particular defensive terminology. The point of a Green Dog is to add an extra man, late into the play, when a man-to-man coverage blitz is called by the defense.

A simple example of a Green Dog occurs when a linebacker is supposed to cover the running back man-to-man when a blitz is called. If the running back stays in to help pick up the blitz, the man in coverage then becomes an additional blitzer – that is a Green Dog. On a Green Dog, the responsibility of the linebacker who was originally in coverage changes, and he is asked to become another blitzer in the pressure scheme.

The effectiveness of the Green Dog is that while the offense may have accounted for all of the original blitzers in its protection scheme, it did not necessarily account for the additional pressure that was brought by the defender who was originally in coverage.

A fan in the stands may think the offense simply doesn’t know how to pick up a blitz, but it may be the case that the offense actually picked up the initial blitz perfectly, and the defense’s ability to adapt (Green Dog) on the fly simply added more men than could be blocked.

The still-shots below from this past weekend’s Oregon State at Arizona game show a perfectly-executed Green Dog blitz that resulted in a big sack for the Wildcats. 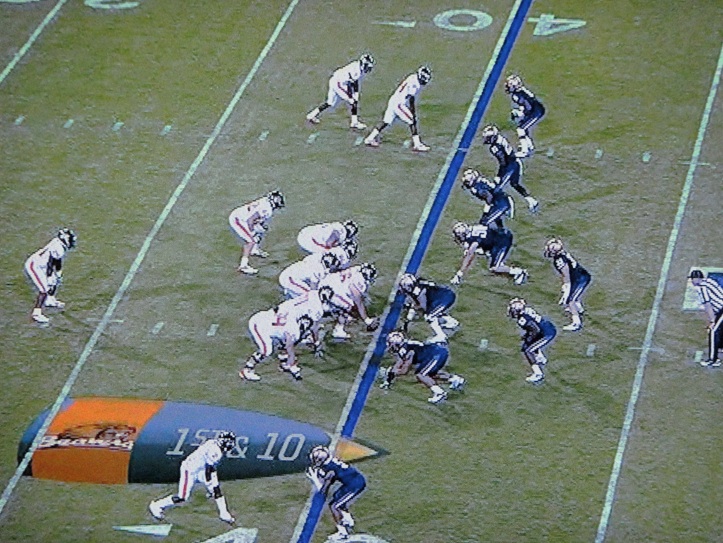 In the first pre-snap frame, the Wildcats lined up with five men across the line-of-scrimmage (three down linemen and two stand-up linebackers at the top of the shot). 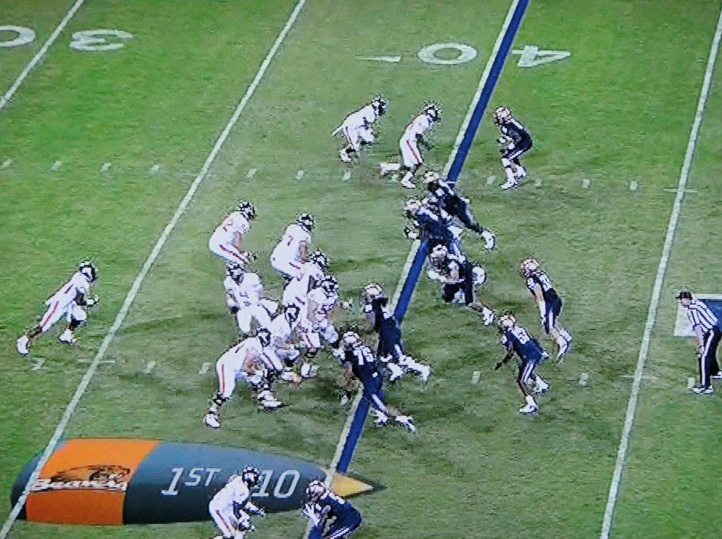 As the ball was snapped, the five Wildcats on the line-of-scrimmage all attacked and created a five-man pressure. Behind the pressure, Arizona was playing a man-to-man coverage where the non-blitzing linebackers were responsible for covering the H-back and the running back. As the above photo shows, on the snap of the ball the two non-blitzing linebackers shuffled towards their man-coverage responsibilities. 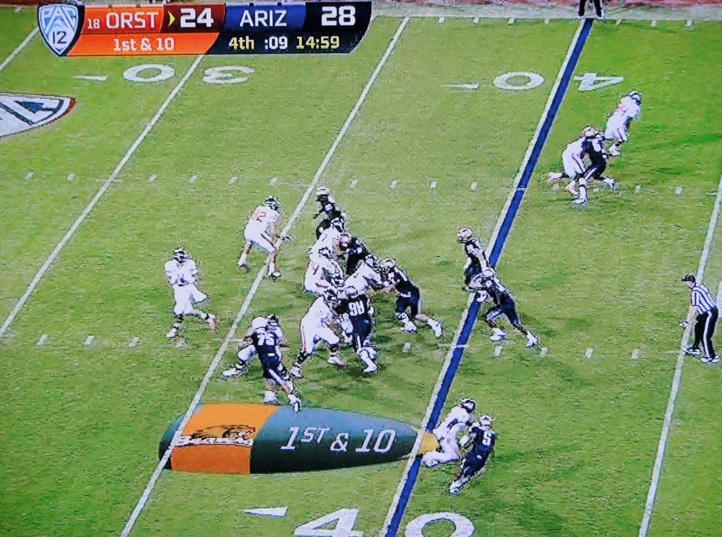 To pick up the blitz, Oregon State used both the H-back and the running back in their protection scheme. Unfortunately for the Beavers, that still wasn’t enough. The moment the Arizona linebackers (the ones in man-to-man coverage) saw that their men were staying in to block, they both immediately triggered downhill and added two more bodies to the pressure; in other words, they Green Dogged. 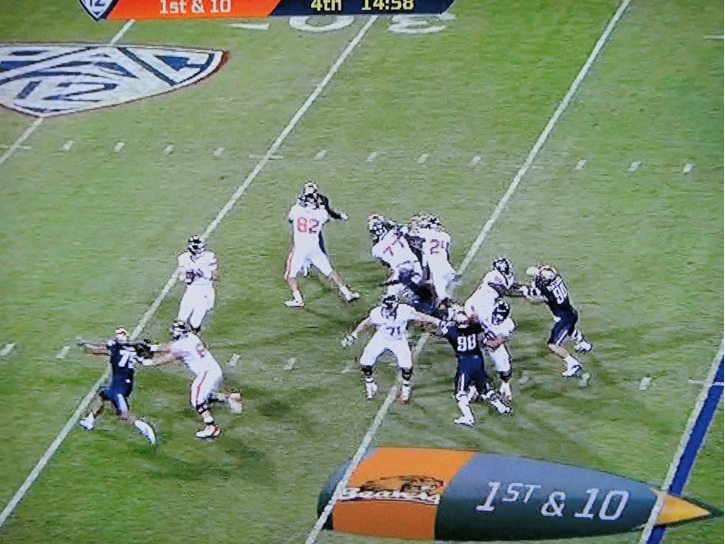 Now, instead of bringing the traditional five-man pressure that was designed, the max-protection from Oregon State triggered two Green Dog linebackers and the defensive scheme quickly turned into a difficult-to-block, seven-man rush from the Wildcats. Enough though the Oregon State running back successfully picked up the first Green Dog linebacker, the second added linebacker shot up the middle untouched. 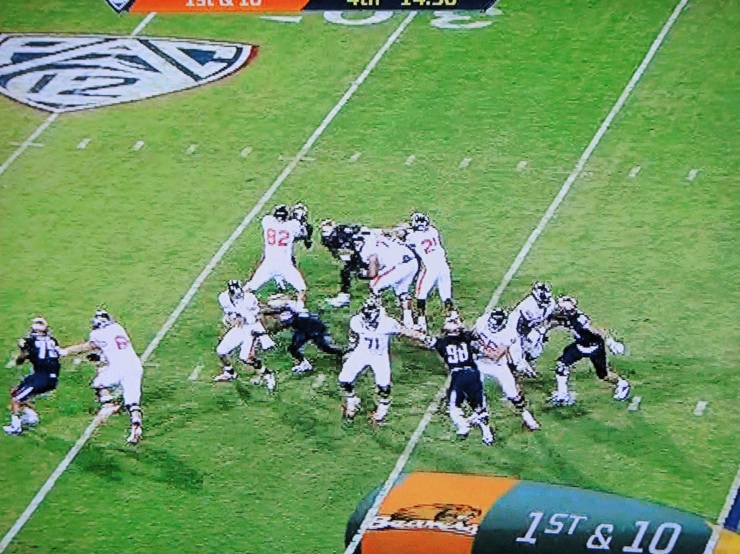 As the final frame shows, the free Arizona linebacker wound up with a clean shot on the quarterback and produced a big sack early in the fourth quarter. The annoying thing about the play from Oregon State’s point of view is that the Arizona linebacker who eventually got the sack was not even supposed to blitz in the initial five-man pressure. But aggressive coaching by the Wildcats’ defensive staff and strong in-game execution by the Arizona players led to this big play.

Not all defensive coordinators coach as aggressively as Arizona's Jeff Casteel did on this particular play. Some coordinators choose not to Green Dog and instead opt for their coverage players to simply float in the shallow passing zones if their responsibilities stay in on protection. Other coordinators fear that a running back will fake the block and turn around to receive a screen pass, leaving the defense vulnerable if his cover-man abandons his responsibility.

While all ways of coaching man-to-man pressures are defensible, few offer the upside of game-changing plays like Green Dogs do. The next time you see a well-coached defense get a sack, carefully watch the replay and see if a Green Dog was involved. When watching elite defenses like Alabama and LSU, I bet you’ll be shocked at the amount of sacks that are made by defenders who weren’t even the primary blitzers in the original scheme.