Analyzing how the Buckeyes forced overtime against the Boilermakers.

Welcome to the latest installment of The Key Drive, a series that focuses on one drive a week that highly impacted the outcome of a game, essentially the drive that was the key to winning or losing.

You can find all the previous Key Drives under the Key Drive Story Stream.

Ohio State came into the game riding high, unbeaten and on a seven-game winning streak. Purdue had yet to get a win in the Big Ten and was visiting a hostile crowd in The Horshoe. However, Purdue had played a tough game so far and managed to knock Ohio State's most dynamic weapon on offense, Braxton Miller, out of the game. After getting a safety to start the fourth quarter and picking off OSU backup Kenny Guiton with 2:40 remaining in the game, Purdue seemed to be on its way to victory with a game-killing drive. Unfortunately, the Boilermakers were unable to pick up one more first down to ice the game and were forced to punt. Down eight with 47 seconds left to play, Ohio State was going to need a big drive out of a stagnant offense to force overtime.

Well, Ohio State isn't afraid to put the game in Guiton hands. With 45 seconds left and down eight points, they send four wide receivers on passing routes without keeping a running back in to help with any blitz pickup. 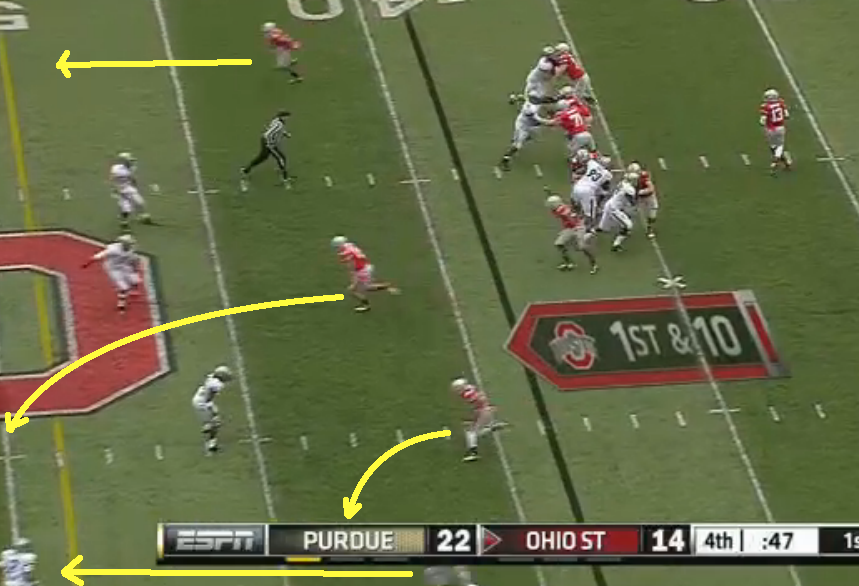 The trips receivers to the near side run a common combination route. The outside-most receiver runs a streak deep down field, the middle receiver runs a shallow out route, and the inside receiver runs a long drag to the outside. This play takes a long time to develop downfield and Guiton almost gets sacked on the play. However, he does a nice job of stepping up in the pocket, shrugging off the rusher, and throwing an easy ball to a wide open Smith. I have no idea why Smith does not get out of bounds after running for a gain though. He wastes about 10 seconds of valuable clock time with no timeouts left. I do really like Urban Meyer stopping Guiton from immediately spiking the ball. If Oregon can run a play before the clock even starts running after a first down, then any team can get a coherent play call in before losing three seconds of clock time.

Ohio State runs a great play considering the situation, and I really can't see why Purdue wouldn't be defending this play. Ohio State lines up with three receivers to the right side. At the snap Guiton rolls to his right and the line shifts over as well, with the running back setting the edge on the right side. The receivers again run a simple clearout play designed to attack the sidelines. 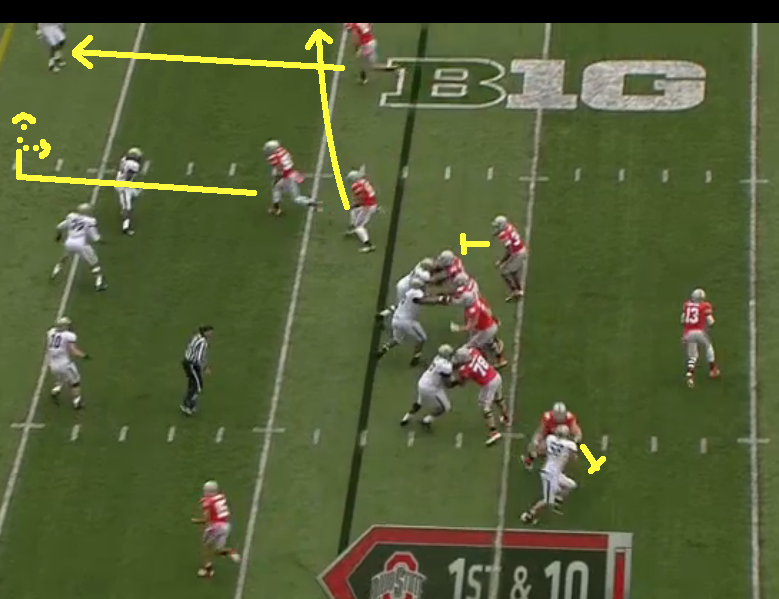 As Guiton rolls out of the pocket, the outside-most receiver runs another streak route down field, and the inside receiver runs a 10-yard "dig" route, where he gets to 10 yards and then either sits down in zone coverage, or works to the outside depending on what the coverage dictates. The inside receiver runs a simple out route and is just open, I mean, wide open. The defender assigned to the inside receiver never challenges the out route and lets Spencer get out of bounds for an easy play. In this situation, without allowing a touchdown, obviously, Purdue wants to keep Ohio State short and in bounds. Instead, they allow two easy completions to get to the 14-yard line. In two plays Ohio State has earned 2.57 equivalent points and only taken about 20 seconds off the clock. That's a quick start to a drive.

Ohio State lines up with three receivers to the near side again ... and runs the same play they just ran, only to the opposite side. The receivers shorten their routes a little, but it's the same play. This time, Purdue sits on the outside routes and forces Guiton to look elsewhere. Guiton looks like he is looking for a shot at the endzone here, and on 2nd and 2, it is probably the right time to do it. Purdue does a nice job covering the receivers down field and keeping Guiton in the pocket, and he is forced to throw the ball away.

Ballsy. Ohio State lines up in the pistol, and runs a read option on the defensive end to the left side. Hyde is able to scat forward for a first down. I wonder, if they had not gotten it, did they have a play call ready to go or not? They had to have two plays ready, right?

Spike. Again, I never really like the spike play, I always think you can run a decent play to the back of the endzone.

I think Ohio State got very lucky that this pass fell incomplete. Spencer is lined up on the outside and runs an In route underneath the slot receiver. If he catches the ball where Guiton puts it, he is short of both a touchdown and a first down. With the clock at 12 seconds this is not a favorable situation Ohio State. Either Spencer needs to run his route deeper, or Guiton needs to wait on Spencer to get closer to the endzone on his cut.

Well, the defender certainly had the receiver shoved back away from the ball, but this is a very bad fade throw. Fades need to be very far outside, very deep in the endzone, or both. This is a short throw to the inside of even the defender. Ohio State gets bailed out here with a penalty. Not saying there wasn't pass interference, but if the defender hadn't instinctively extended his arms out this results in 4th down. Instead, Ohio State gets 1.10 free equivalent points.

Play No 8: 1st and goal at PUR 2 | Kenny Guiton pass complete to Chris Fields for 2 yards for a TOUCHDOWN | Equivalent Point Value: 1.48 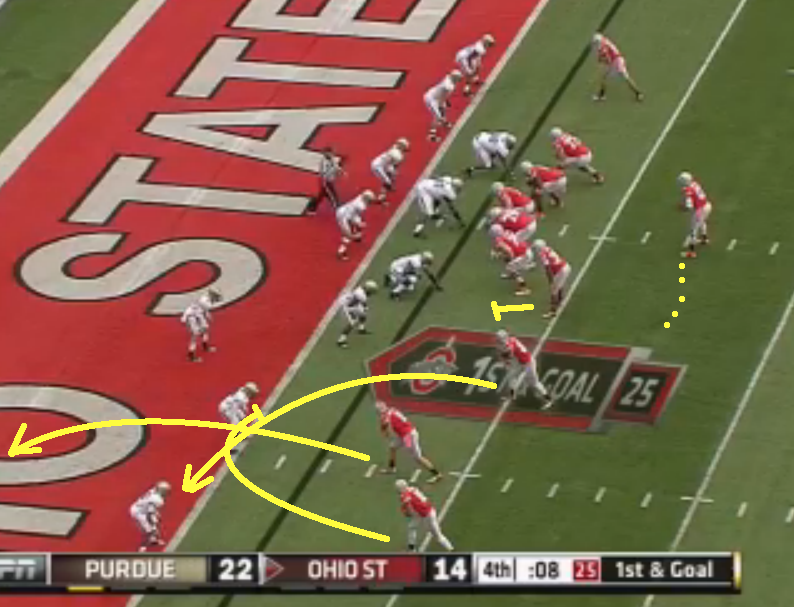 I say stop route liberally, the screen shot sure looks like a pick, but it isn't called. 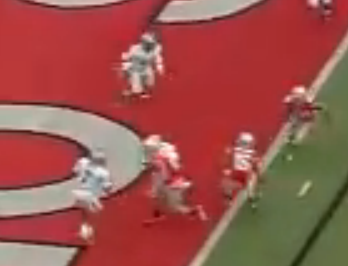 The ball is actually tipped in the air which is the reason its such a close call. The play calling has been great on this drive and a huge help to Guiton. They let him roll out to avoid pocket pressure, and they ran simple combination routes for him to read the defense, and he rewarded the coaches with a clutch touchdown with three seconds left.

Oh, this play is a beauty. After attacking the outside of the field the whole drive and continually rolling Guiton out to one side of the field, Ohio State has set up this play perfectly. At the snap, Guiton rolls to his right looking for an easy throw to the endzone. After he sees nothing is there he pulls up, looks back to his left, and lofts a ball up to Heuerman who is wide open in the endzone for a TE Delay to the backside. You can see in the screen shot that Heuerman is hiding on the line and waiting for Purdue to over-pursue to the playside. 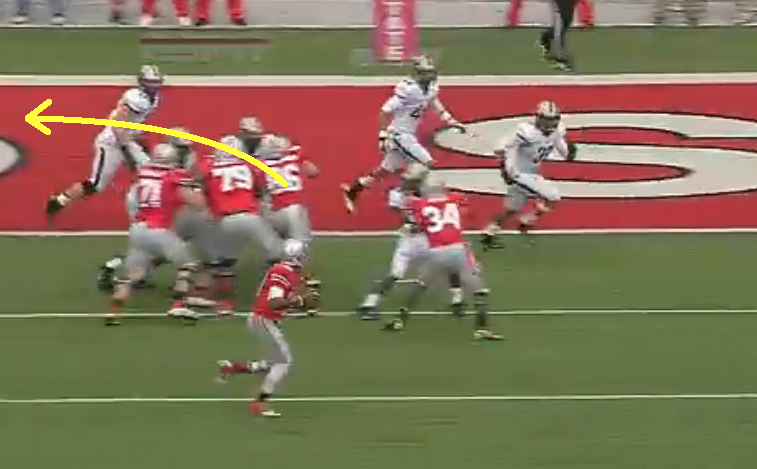 Ohio State would go on to win in overtime after scoring a touchdown in the first period and keeping Purdue out of the endzone. With Braxton Miller supposedly healthy and ready to go for the rest of the season, Ohio State looks to have survived its closest call of the year.