Share All sharing options for: The Key Drive: Washington 17, Stanford 13

Welcome to the fourth installment of The Key Drive, a series that focuses on one drive a week that highly impacted the outcome of a game, essentially the drive that was the key to winning or losing.

A Top 10 team, on the road, on a Thursday night, in a conference game? You really can't set up a game much better than that. Washington had come into the season with high hopes, or rather, higher hopes than normal. But the Huskies had underperformed slightly up until this game. In the end, winning its first two home games, albeit against San Diego State and Portland State, was exactly what Washington needed to do to start the season -- with a torrid schedule coming up, they needed as many wins as they could get. Stanford, on the other hand, had pulled off its own upset against USC and vaulted into the Top 10. It seemed it didn't matter who was at QB for stanford with a great defense (6th in Def. S&P+) leading the way. If Stanford could run the ball and not put its defense in bad spots, the consensus coming in was that the Cardinal could get out unscathed. Unfortunately, Kasen Williams had other plans.

This had really been a defensive struggle all night until Bishop Sankey finally conjured up some offense with a 61-yard touchdown run at the end of the third quarter. Outside of Sankey's run, a great pass from Keith Price to Kasen Williams, and a couple of deeper passes from Stanford's Josh Nunes to Zach Ertz, there hadn't really been any big plays in this game. In fact, Stanford's only touchdown came on a tipped-pass interception return for a touchdown by Trent Murphy (some would call this a Fat Guy Touchdown, however, Murphy looks pretty darn fit in this play). Stanford and Washington traded punts in the fourth quarter after Sankey's touchdown run. Stanford's short punt gave Washington the ball at the Huskies' 35 with 8:47 remaining in the game.

Washington comes out in the Pistol with two wide receivers to each side and Sankey behind Price. The play call is a variant of the zone read concept. The quarterback puts the ball in the running back's belly and reads the defense. However, if the quarterback keeps the ball he can now run it himself or pull up and throw a bubble screen to the outside.

On this particular play he simply hands the ball off to the running back for a short gain. To be honest, I am not sure what Keith Price is reading on this play. The right tackle attempts to block the defensive end outside and clear a running lane for the running back. What this usually means is that the quarterback is now reading the DT for his keep/give key. However the DT gets blocked down the line by the guard. The only guy unblocked is the linebacker. It's not a decent matchup to have a running back one-on-one with a linebacker in space, but the defensive end is able to close the hole rather quickly. Sankey is unable to make a move and just falls forward for three yards.

This play tells us what Price is reading to determine where to go with the ball. I mentioned last week how analyzing these drives every week really opens up your eyes to how often teams line up and run the exact same play. This time the running back goes left for the fake, the offensive line blocks left in a typical run blocking pattern, and the running back looks for the ball. But this time Keith Price immediately rockets the ball outside to Mickens on a bubble screen. The only difference between the previous play and this one was the alignment of the left OLB. On the previous play, he was lined up over the slot receiver, and this time he has moved inside as a run defender. Same offensive play call, different defensive alignment, different result. There really is some great offensive football being drawn up these days. Of course, it still comes down to execution. The outside receiver does not get a great block on the corner, and the corner makes a great tackle for a short gain.

This play seems designed to get 4 yards and no more. Washington comes out with three receivers to the right and Price lined up in the shotgun. They motion Seferian-Jenkins over to the left as a wide tight end. At the snap both Seferian-Jenkins and the tight end on the right run short, five-yard curl routs to get to the first down. The outside blockers, in this case the left tackle and the running back lined up to the right of Price, engage their man and attempt to cut them down to either move the pass rushers outside of the passing lanes or keep the defenders' hands down to prevent a blocked the pass. 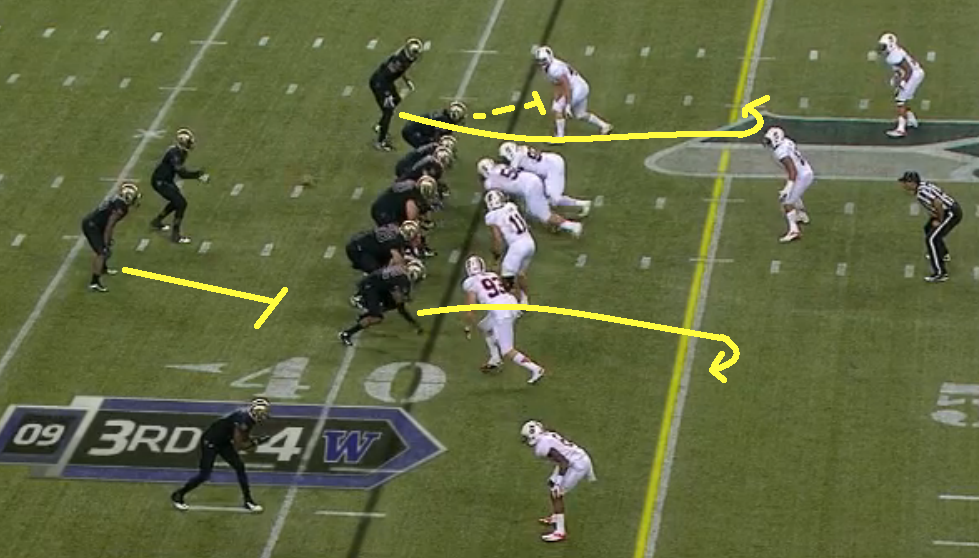 The passing lane is wide open but the receiver does not get enough depth on his route. He actually slips getting out of his stance and I think that causes him to hurry his route and cut it short to give Price a passing option. Seferian-Jenkins catches the ball for the first but then falls back over the line to make it 4th-and-1.

I think we all owe Steve Sarkisan a hearty thanks for actually going for the first down here. Too many coaches would have punted here, and like they always say, fortune favors the bold. Washington actually lines up in an I-formation. For those of you who forgot what that looks like after watching so many spread teams play this year, the fullback and running back line up behind the quarterback, who is under center. The running back then motions out of the backfield as a receiver, and Washington executes a quick handoff to the fullback, who plunges ahead for the first down.

I really like Washington's strategy of running up to the line after the big fourth-down conversion. It prevents Stanford from really getting set or substituting too much. Washington comes out with three receivers to the right lined up in a shallow trips formation. All of the receivers block down and give Sankey an alley on the outside. He is able to cut it up for a decent gain.

Washington again lines up in the I-formation out of the huddle and runs a simple Iso run play. On Iso plays, each lineman is responsible for a defensive player in the box. This is different than stretch and zone concepts where each blocker is responsible for a gap and blocks through their gap. Washington's line is able to get a hat on every man and not get beaten too quickly on any one-on-one blocking assignments. Sankey is able to shake the first tackle attempt and get to the linebackers for a gain of six yards.

Man, Stanford gets through the line and puts the pressure on Price extremely quickly. Price does a nice job of evading the pressure and stepping into whatever semblance of a pocket is left. Unfortunately the defender tips the ball as it comes out of his hand, and it falls to the ground nowhere close to the intended receiver. Washington is actually very lucky that this ball is not picked off. It makes a lot of sense that Washington is throwing quick passes to the outside and simply cutting down the Stanford D-line. It seems they can not sufficiently protect Price against this pass rush.

Washington again calls a run/pass option for Price. As you can see in the screen shot, once the ball is snapped the running back comes across Price's face for an outside handoff. The line blocks left and a guard pulls around the outside of the tackle to give Sankey a lead blocker on the outside run. The receivers to the left even run at their man and start to block on the outside. 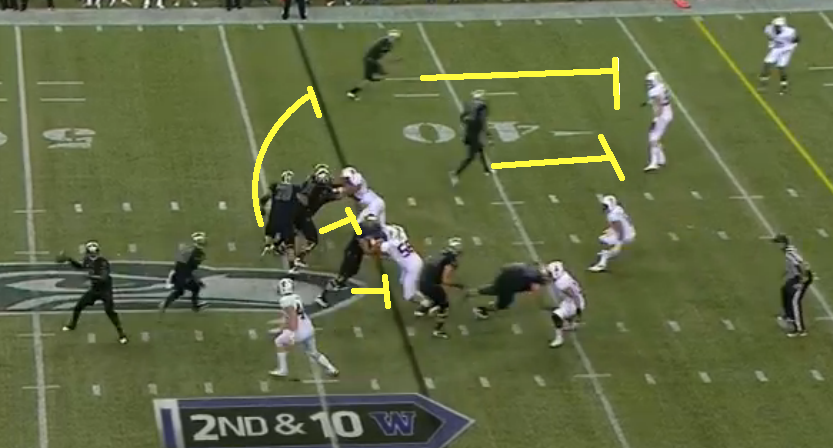 The only players running the pass play are Price and Kasen Williams to the right. Price and Williams notice before the snap that the corner over the top of Price is giving him a very large cushion. At the snap Kasen Williams runs upfield and simply stops and waits on the pass from Price. It is ultimately Price's decision wether to give the ball to Sankey or to throw the ball outside and let Kasen Williams make a move. This play works exactly as it's designed for a gain of eight.

Washington lines up in the same formation it used for Play No. 5. Except, this time Price reads the corner to the one- receiver side, notices the cushion he gives Kasen Williams, and throws the ball to Williams as soon as he gets the snap. In fact, the last time they ran this play Williams ran as hard as he could at the corner and threw a great block on the backside. On this play, Williams runs a quick hitch, where the receiver takes one step upfield, stops, and turns back to the quarterback for a quick pass. The hard step upfield causes the corner to pause to anticipate either a route or another hard block like Williams threw on Play No. 5. Once Williams has the ball secured, he then makes a great move to slide off the corner. His speed takes care of the rest. Now, bobbling the ball while running alone in the open field is not something you want to keep doing, but he makes a great play to get into the endzone.

This drive really represented the new schemes that many offensive coordinators are employing. On nearly every play Washington was using some sort of run play with a passing option. It takes a quaterback who knows the system well enough to be able to make the required reads consistently, and hopefully Keith Price can continue what he showed in this drive throughout the year. As for Stanford? One missed tackle and we are possibly talking about a close call for a top 10 team on the road as opposed to questioning their top-20 merit.