Taking a look at Louisiana Tech's almost game tying drive against the Aggies.

Welcome to the latest installment of The Key Drive, a series that focuses on one drive a week that highly impacted the outcome of a game, essentially the drive that was the key to winning or losing. With Texas A&M's biggest game of the season on deck, let's take a look back at a game that almost got away.

You can find all the previous Key Drives under the The Key Drive Story Stream.

Texas A&M jumped out to a a quick 27 point lead but was unable to put it away for good and allowed Louisiana Tech to storm back and make it close. After trading blows for a while Colby Cameron threw a short pass to Quinton Patton who proceeded to take the ball all the way to the endzone for a 62 yard touchdown with 1:46 remaining. Down 8 Louisiana Tech decided to go for the onside kick and actually recovered the ball. It sure smelled like an upset was brewing down in Shreveport.

Louisiana Tech comes out of the TV Timeout lined up in your typical Madden Football formation; two receivers to each side and a running back lined up next to the quarterback in the shotgun. Because of the time constraints on the offense (1:45 remaining with 1 time out) we know they will be going with a hurry up type of offense. This forces Texas A&M to put out a base defense and will limit their substitution throughout the drive. Because of this Texas A&M lines up in a 3-3-5 defense (3 down lineman, 3 linebackers, and 5 defensive backs). 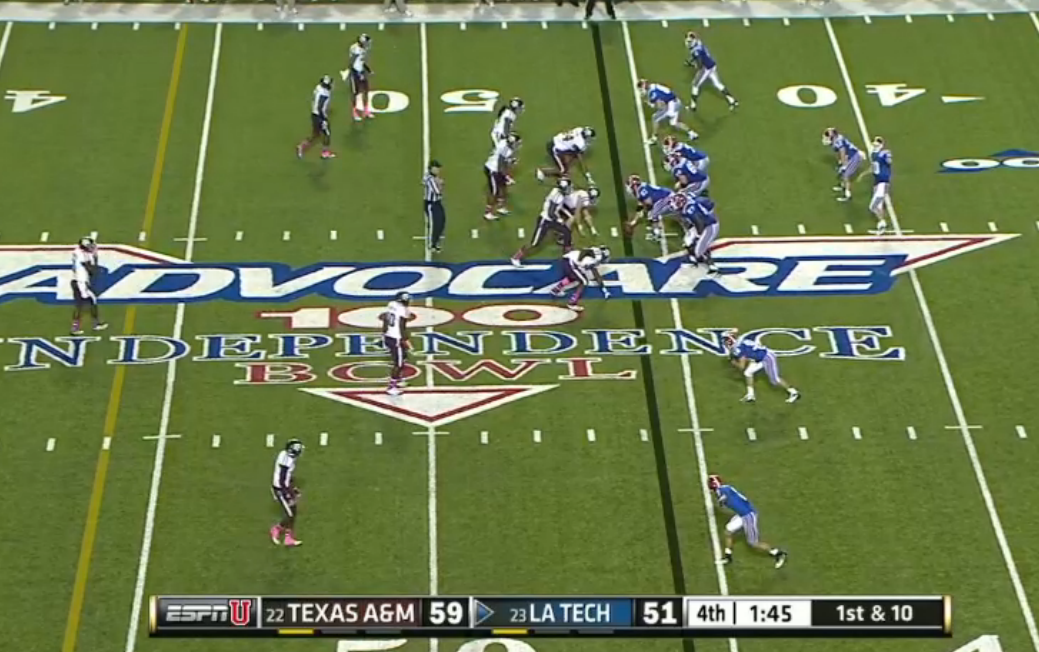 At the snap, Texas A&M brings two of their edge linebackers on the far side of the formation on a blitz and drops the defensive tackle back into pass coverage in a typical zone blitz. Colby Cameron does a great job reading the blitz and identifying the open man. In this case the inside receiver to the far side runs a deep route to take the corner away from the line of scrimmage, and the outside receiver runs a shallow drag which brings the other defensive back on the far side into the middle of the defense. This leaves the running back wide open for a simple swing route and a gain of 7.

Louisiana Tech runs up to the line and runs the most basic play in college football; the zone read. The line blocks to the left with the running back and Cameron waits for the outside linebacker to pick running back or quarterback. The outside linebacker looks like he is coming outside on a pass rush so it is an easy read to hand off to Holley. Even such a simple play gains 4 yards and a first down, and Holley was this close to breaking through the line and had a lot of room to run in the middle of the field. Fortunately for Texas A&M someone brings him down from behind for a gain of 4.

Nothing fancy about this play. Patton runs a simple comeback route to the outside and Cameron has all the time in the world to make this throw. A better throw should give Patton a couple of more yards to possibly make a play, like a 62-yard touchdown, but he is still able to make the catch in bounds. The corners for Texas A&M seem content to give up the short routs but Louisiana Tech is already at the 38. It will be interesting to see if the corners continue to give a cushion on the outside.

This throw is a thing of beauty. Nothing changes about the formation for Louisiana Tech and they take advantage of the large cushions the Texas A&M defense is giving them. Both receivers to the right run streaks down field. The outside receiver runs at the outside corner and tries to get leverage over the top or the outside. The inside receiver is able to beat the slot corner and quickly gets over the top of the corner in the seam. Because the corner to the outside is pre-occupied with his own deep route and the safety over the top is way back there, the quick seam route is open. Cameron throws a great ball so that no deep defenders can make a play on it, and allows Gru to go up over his man and catch a great pass. There is a great Smart Football article on seam routes and 4-verts here 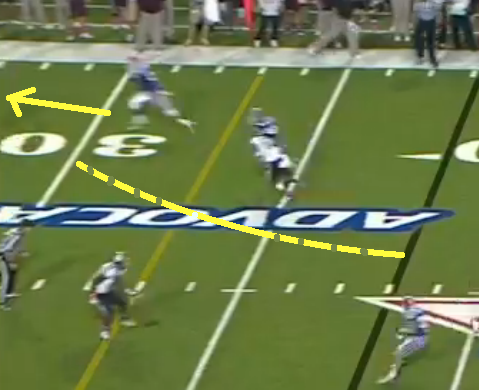 Zone read again. This time Texas A&M gets great push from their D-line and doesn't allow Holley any lanes to run through. Gain of 1.

This play is a Cover Two burner. With Louisiana Tech hurrying to the line they guessed that A&M would play a base defense and ended up right when they went man underneath with the safeties over the top. The two slot receivers run corner routes to take both safeties away from the middle of the field. That leaves the running back one-on-one with an outside linebacker. The running back takes one step on an out route and then cuts up field towards the endzone. He easily beats the linebacker and with the safeties flying to the outside this is an easy throw for Cameron to make.

This is a great play to run down near the endzone because the safeties immediately jump the corner routes to prevent a touchdown. If you have a running back that can beat an outside linebacker, and Holley has already lined up at receiver twice this drive, then this is an easy play if you get the right coverage. This sets up a do-or-die two point conversion.

Man I love college football. I could pretend like I know what formation this is and what plays Louisiana Tech can run out of it and how Texas A&M should defend it, but I have never been more excited for a two point conversion than when Louisiana Tech came out in this: 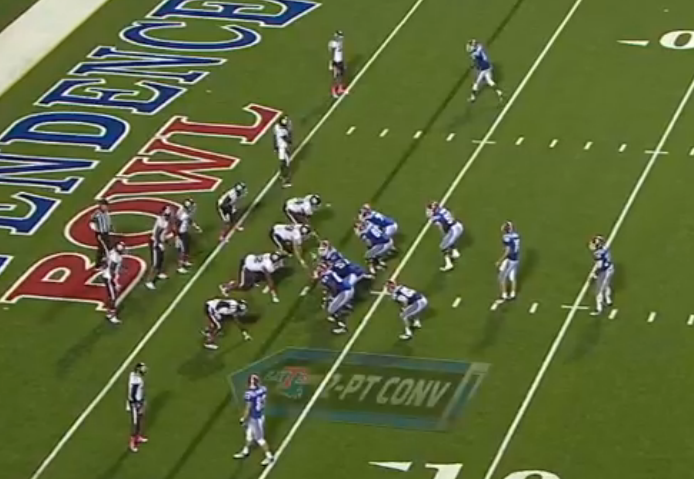 From here Louisiana Tech throws a fade. What? Perhaps with a good throw this is a catchable ball but Cameron throws the ball out of bounds. As you can see in the screen shot the run fake actually looks like it has a good chance of succeeding. The line has sealed the right side of Texas A&M's defense and they have two pulling lineman coming around to the left. It looks like they might have been better simply running the ball in than throwing a fade. 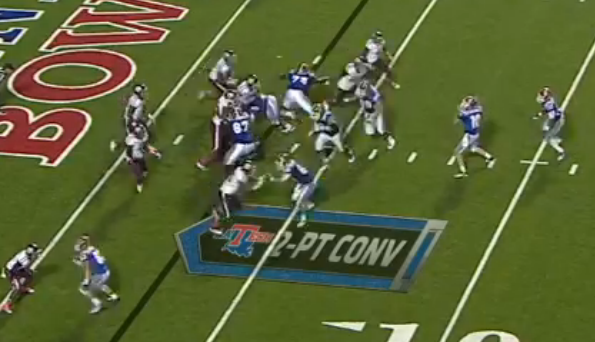 That fact that a game with 116 combined points came down to a recovered onside kick and a two-point conversion is awesome. While Nick Saban might not like where college football is going, if we can have more games where Louisiana Tech takes an SEC foe down to the wire, then I am alright with it.