The Evolution of Multi-Threat Offenses: How Can They Be Stopped?

What can defenses do to stop offenses that seemingly have all the answers?

Share All sharing options for: The Evolution of Multi-Threat Offenses: How Can They Be Stopped?

The demise of defense in college football has been greatly exaggerated. In the past couple weeks, amid video game-like scoring and yardage from some of the nation’s most prominent squads, many national pundits have been on the airways telling anyone who will listen how bad defenses are these days. As a former defender, I take exception to that.

It is not necessarily that defenses are any better or any worse than in previous decades, it’s simply that offenses are much, much better than ever before. At no time in the history of football have college defenses ever had to defend offenses with the sophistication and pace as they do today. More total plays, run with higher complexity, are bound to produce greater scoring figures. That is not necessarily an indictment of defense, but simply the evolution of the game as a whole.

Two week ago, I discussed how Oregon makes offense look so easy. One of the main points was how Oregon requires a defense to defend multiple threats on any given play. Sure, there has always been the triple-option in college football, but in the modern game there are times when all three options could easily result in six points for the offense. The more games you watch, the easier it is to see how complex offenses have become.

In this past weekend’s 48-45 victory over Texas, West Virginia’s explosive offense employed the same type of multi-threat plays as I discussed in the Oregon piece. West Virginia first came out in a formation I called the Inverted Pistol, a formation the Mountaineers had yet to show this season. In this set, West Virginia switched the alignment of the halfback and fullback/tight end in their traditional two-back Pistol-formation.

As mentioned above, coming into the game, the Longhorns had never seen this version of the Mountaineers’ Pistol-formation. By the time the second quarter had begun, the Texas defense had seen West Virginia already run a basic stretch running play as well as play-action pass out of it. 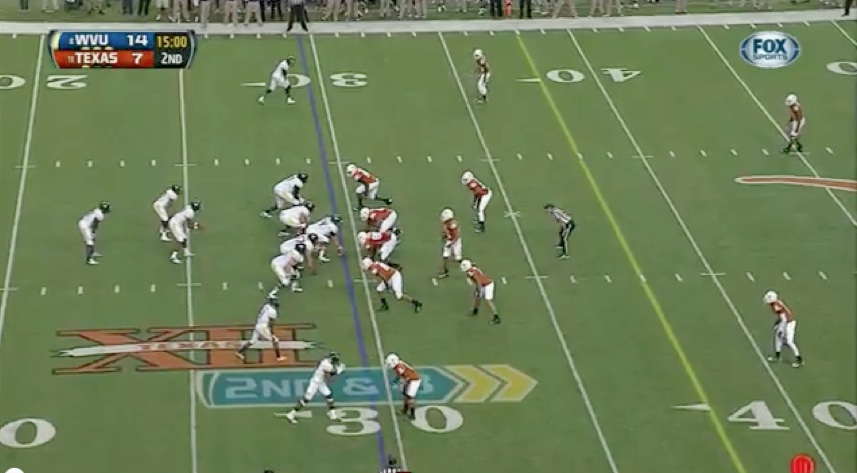 On the snap of the ball, West Virginia once again gives the Texas defense a stretch-run action, just as they had on the initial play-action touchdown and again on the stretch run later in the first quarter. 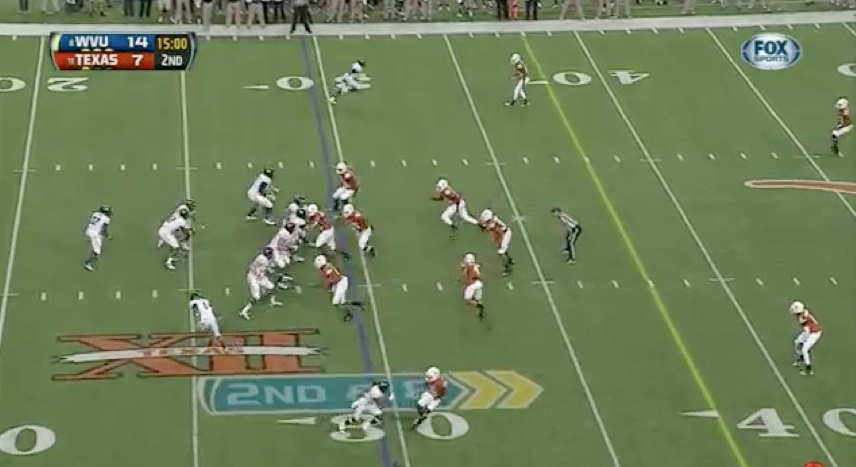 Given what they had already seen from this formation, the Longhorns had to be prepared to come downhill to play the stretch as well as react and drop into coverage if play-action developed. While the soft-set by the offensive line would seem to indicate pass, all of a sudden the slot receiver Tavon Austin, arguably the most explosive player in the nation, looks as if he is going to receive a perfectly set-up reverse. 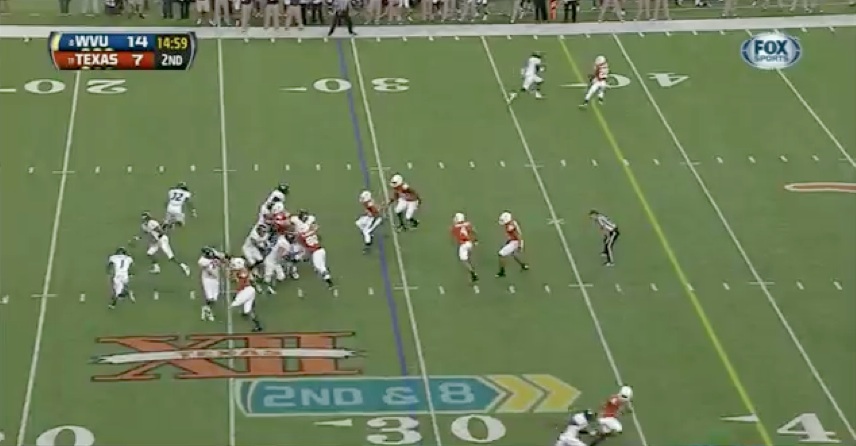 Already threatened by the stretch play going to their left, the defense is now threatened by a reverse going to their right. After two fakes and Texas players running all over the place, quarterback Geno Smith calmly spins around to see his wide-open halfback awaiting the ball for a beautifully set-up screen pass. 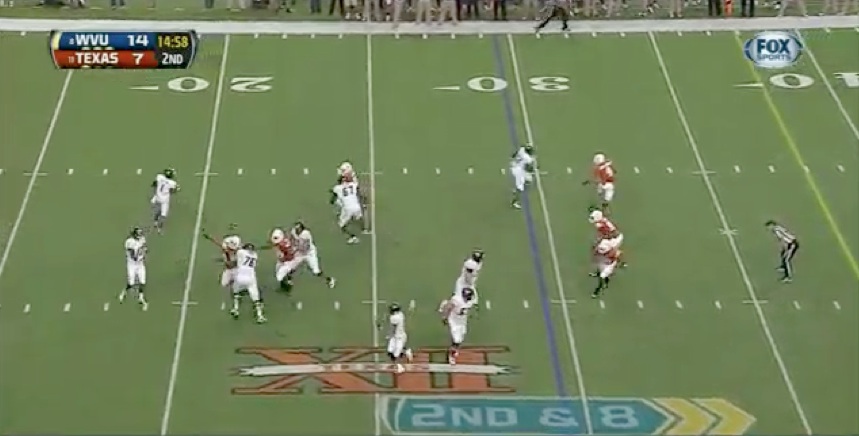 By the time Buie receives the ball, there is not a Longhorns defender within seven yards of him, and he has two blockers ready to pave the way towards a nice gain. 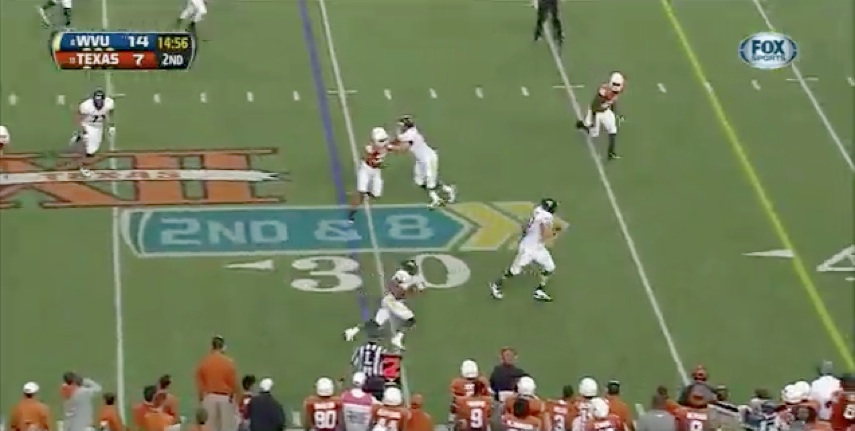 This particular play – one that included a fake-stretch, a fake-reverse, and ended with a late-developing screen pass to the halfback who was also the initial threat – ended up going for 16 yards and could have busted for a lot more.

This is the type of stuff that keeps defensive coordinators up at night. Despite hours upon hours of film study, the Mountaineers came out in a completely new formation and threw multiple threats at the defense right off the bat. On one single play, the Longhorns potentially had to defend a stretch, a reverse, a play-action pass, and a late-developing screen pass. Even if the most basic defense in the world were called, there are several defensive positions, especially the linebackers, which could have had four completely different responsibilities depending which one of those plays ultimately developed.

This isn’t a matter of whether or not defenses are trying to be too complicated in response to these current offensive masterminds. It’s more of a tip of the cap to offenses that are diverse and sophisticated enough to adapt to what any defense may throw at them. Short of simply having overwhelming athletes on the defensive side of the ball, the question to then ask is: What can defenses do to stop these offenses that seemingly have all the answers?