Share All sharing options for: The Reading Room: Meat Market 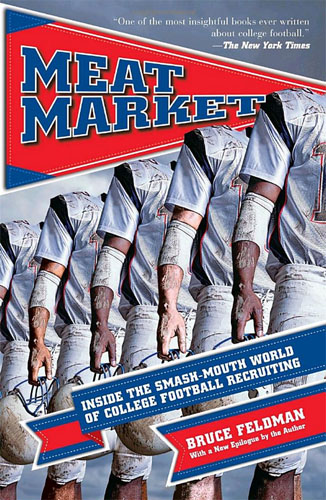 National Signing Day, according to acclaimed football writer Bruce Feldman, has pretty much become a secular holiday in those parts of the country dominated by devotion to college football. It boasts a Christmas-like anticipation in waiting for athletes to finally declaring the teams they will play for that is matched by the Halloween-esque delight in the misfortune on the part of ones foes who are passed over. It’s fun but not necessarily for all.

Recruiting and its excesses have been a hallmark of the sport from its earliest days. The use of ringers, subsidies and outright payment of athletes to compete in the amateur sport were as much cause for scandal in the 1890s as the 1990s. And enterprising journalists have consistently chronicled those excesses throughout the history of the sport. What has changed in the past decade is the emergence and explosive growth in the industry catering to the needs of teams pursuing the premier players (and the fanbases that follow them).

It was into this fast-changing landscape that Feldman ventured in 2006 to get a look at the inner workings of a program that had hitched its wagon to the hope of securing blue-chip talent - the University of Mississippi Rebels. The result was his book Meat Market.

The tome is a worthy addition to the long tradition of expository journalism examining the questionable practices associated with recruiting in college football. And, since the industry of recruiting and the stakes involved has only grown since Meat Market's appearance on bookshelves in 2007, it is a more valuable read today than ever.

In the early 2000’s, Ed Orgeron’s was a coach on the rise due to his key role in developing talent for Pete Carroll’s powerful USC teams. Ole Miss tapped him as head coach in 2005 after recognizing a need to attract on-field talent as the key to returning the football program to the Southeastern Conference’s elite. The next year Feldman followed Orgeron and his staff during the critical months leading up to the 2007 National Signing Day.

The one drawback of the book is that sometimes the tale is overshadowed by Orgeron’s larger-than-life personality. It's sometimes difficult to focus on the details of the team's recruiting campaign due to the torrent of colorful anecdotes concerning the bombastic caffeine-fueled Cajun. That's unfortunate since it gives the proceedings something of a comic air even though the subject of Meat Market makes it something that needs to be pondered in complete seriousness.

That quibbling reservation aside, Orgeron’s Ole Miss turns out to be an ideal subject for Feldman's examination of the recruiting process precisely because the program lacks the deep pockets of many schools it competes against. To make up the difference Orgeron's plan is to expend more effort than anyone else and Meat Market outlines in gruesome detail how the Rebels attempted to do just that. And, in the end, fell short.

Although Meat Market is a vibrant portrait of a single program the book is actually an incitement of an the entire system of player recruitment in college football. The book's outlining of recruiting excesses at Ole Miss are not an isolated case of one rogue program but an case study for the sport as whole. And the most important and sobering lesson to be learned is that almost everyone involved has the best of intentions as they follow the path to National Signing Day.

As much as daily punditry paints the recruitment drama as being populated by individuals wholly venal or entirely virtuous, the truth of the matter is far more complex. The quick judgments that emerge when constantly viewing the big picture somehow don’t adequately circumscribe the daily moral issues of a program in the hunt. Taking the wider view Meat Market instead paints a portrait of men caught in the pressures of a dysfunctional system -- a college football equivalent of Glengarry Glen Ross, if you will.

That there are unscrupulous coaches and teams where shady activity is at least tacitly allowed is certain. Yet insisting the whole of the sport is comprised of those elements is absurd. It’s far more likely that the vast majority of teams and the men who lead them are looking to find ways to succeed within the confines of the rules. The risks involved with breaking them are simply far too great.

The problem is that the process of recruiting and the stakes at which it is played very often outstrips efforts to constrain it. Worse, efforts to control it often make the situation even murkier for the participants. Because, at its heart, recruiting comes down to trying to maximize your return in a system that vastly distorts the value of the commodities that comprise it.

Physical ability as distributed across the population is a Gaussian function (more commonly known as a "bell curve") and the recruiting process forces elite programs to face the tyranny of its far end. In a regular system – like the NFL – the value of these individual resources is set by the market. The skill level of a player allied with the scarcity of his abilities set in context of the number of players in the available pool is roughly shown by the price teams are willing to pay for his services. 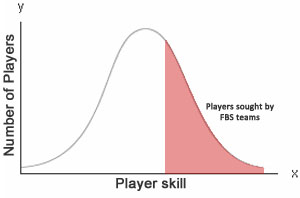 But putting a price tag on a player is prohibited for college teams; so instead this arcane system for recruiting has resulted.

In Michael Lewis’ now classic Moneyball, he argued that the Oakland A’s baseball team succeeded not by spending more money but by maximizing the amount of money they spent. They identified which players on the market were the best value and designed a system that worked to use them most efficiently. This same approach should work in college football except the market is banished by definition.

Just as with any professional sport, college coaches are held responsible for wins and, by extension, the financial success of the program (that's an insight the above McClure's article stated outright in 1905). Yet college coaches are explicitly denied any uniform way to measure what players do and almost no direct means of compensation for it once they agree to play for them. The result is what Feldman describes in Meat Market.

The best programs are almost always going to have the edge for obtaining the most elite athletes. This forces lesser teams to sift through a larger amount of limited data on other players to try and establish which ones are furthest along that X axis. The further back you are, the more information you are forced to evaluate for a more limited result.

Feldman provides a telling detail on this point. The Ole Miss staff had broken down more than 200 evaluation tapes of the 2007 recruiting class a year before National Signing Day. That number more than quadrupled over the ensuing 12 months. The film budget for the program was $30,000 and the guy running it wanted to increase it by a third.

When you consider that limited set of athletes can be placed on a bell-shaped distribution curve of academic ability the problems become even more complex. Feldman details conflicts between the Ole Miss coaching staff and the school’s administration for athletes who fall on the far right of the ability curve but the far left of the academic one.

In a practical sense, most second-tier programs try to get one out-of-the-park recruit and make do with the best of the rest they can corral into committing to them on signing day. The Meat Market is a blow-by-blow description of how that process occurs. In both cases, the pursuit of quarterback Stephen Garcia and running back Joe McKnight proved fruitless as the pair chose to take their skills elsewhere (South Carolina and Southern California, respectively).

(The alternative option is to dump the accepted approach to the game and employ one that uses an unconventional system that can feature undervalued - and more easily recruited - players. It is the high risk/reward formula of that approach makes it an anathema teams with as much financially on the line as those in the SEC.)

Yet recruiting players is only the first challenge college coaches grapple with as they try to assemble a successful team. Once there is a group of individuals on the practice field there is the challenge of designing a strategy that fits their particular ability and temperaments. Add to that the regular churn of personnel both within the program and the school administration that oversees it and year-to-year consistency is often a crap-shoot at best.

One coach on the Ole Miss staff cited in Meat Market estimated that as much as 15% of his time was devoted to recruiting. As necessary as that time may be, it comes at the expense of other critical duties such as game preparation, practice evaluation and face time with players on the current roster. Miss the balance and things can go awry mighty fast.

Much of that part of the tale is beyond the scope of Feldman’s book but it is important to keep in mind how those concerns add significantly to the pressures a head coach contends with while battling the public perception of his ability to manage the team.

The stakes are so high that programs are forced to pour more and more resources into recruiting to remain competitive. It doesn’t take a genius to see that pouring money into such a chaotic enterprise is a recipe for problems. Long before the likes of Willie Lyles popped up on the national media's radar screens, this book pointed out the growing importance of questionable recruiting services for college programs.

The simple response to the excesses of recruiting outlined in Meat Market is to rekindle the calls for a reform that periodically return to beset the sport. The results of these efforts tend to be the same; the punishment of a few scofflaw programs and a heap of new NCAA rules circumscribing activities that are almost inevitably obsolete.

One new development in the past decade or so has been an explosion in compliance departments over the past decade – an entire bureaucracy invented from scratch to scry the arcane pronouncements of the sport’s organizing body. It’s an open question as to if this innovation has rehabilitated the system or simply created a more adroit manipulation of the existing rules.

A more gimlet-eyed look at Feldman’s book suggests a more radical response – a complete evaluation of the recruiting system and a complete overhaul of it from scratch. Given the financial stakes involved that’s not an option likely to be pursued by the sport’s powers-that-be anytime soon.