How is the running game impacted by adding more wide receivers to the equation?

When college football teams line up in four- and five-wide sets, it is more often than not to throw the ball. In fact, the end result of those packages was a pass or sack more than two-thirds of the time in Football Study Hall's 2012 charting data.

Still, that leaves plenty of action on the ground. Runs take up a not-insignificant section of the pie chart below. Even guys like Mike Leach feel the need to hand the ball off every so often. 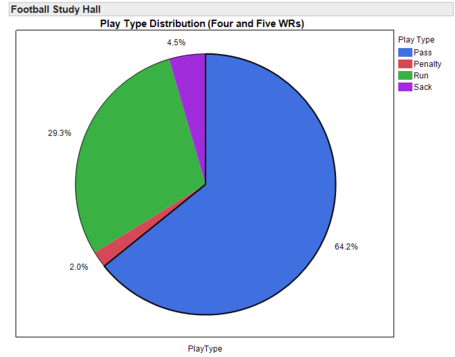 Running out of an empty or nearly-empty backfield comes with the benefit of a scattered defense looking to cover the outside. But that also comes without a lead blocker. How does that balance play out in the end?

It turns out that extra space is allowing for extra yardage on the ground. It's logical that quarterback runs would gain more, as the QB can survey the reaction of the defense and run to daylight, but running backs are having similar success without an extra blocker in the way.

As the table shows, QBs are gaining almost a yard-and-a-half extra when they hold on to the ball in four and five-wide sets. Overall, runs gain close to a yard more in the wideout-heavy sets.

It's not some new revelation that spread-type offenses with more wideouts tend to gain more yardage. They've been at the top of the NCAA offensive rankings for years. However, that has been primarily on the back of the pass. The teams that run out of the spread (like Oregon) use plenty of tight ends and multiple-back sets.

The chart below (sorry about the small print) shows that YPC trends upward until a fifth wide receiver is added. 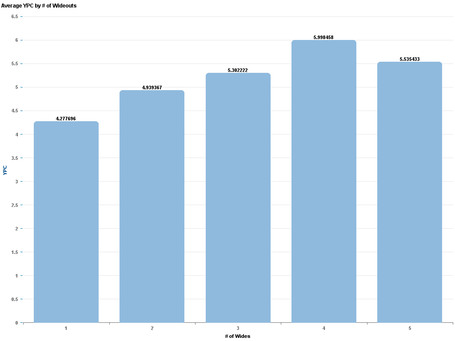 Does this mean teams should consider leaning more towards more wideouts and less running backs when they want to pick up yardage on the ground? Well, it isn't quite that simple.

Of course, part of the success that stems from running out of these passing personnel groupings is just that -- it tends to catch the defense by surprise, and the average down and distance in the table above could be telling.

Runs out of four and five-wide sets are coming with more yards needed for a first down, and likely more often coming in typical passing downs. Defenses aren't just leaning towards the pass because of the formation, they are doing so because a pass makes more sense in the average situation.

Still, it is a positive sign for pass-heavy spread attacks that running without tight ends and fullbacks isn't hindering their ability to pick up yardage on the ground, at least in a typical situation.