Week One Expectations And Reality: Big 12

Share All sharing options for: Week One Expectations And Reality: Big 12

We move on to the conference that may or may not exist in 12 months...

Twitter was so much fun during Baylor's 50-48 win over TCU on Friday night. I follow 480 people on the F.O. College account, and I'm pretty sure all 480 (481 including myself) said "God, I love college football," at some point while the game was unfolding. It was just so perfect. If every game included over 1,000 yards and almost 100 points, we wouldn't appreciate it when it happens -- like the random 4-3 soccer game -- but when it does, and when it includes the exploits of the country's new favorite quarterback (Robert Griffin III), it is a special thing.

In the end, after the comebacks/blown leads and last-second drives, we were left with this:

* Hot Tub also caught the most important pass of the game, an over-the-middle, third-and-10 trick pass from Kendall Wright on the game-winning drive. He got absolutely leveled but held on.

* Wright, who has oscillated between incredible and invisible in his career, was just the former. His line: 12 catches (on 13 targets!), 189 yards, 2 touchdowns ... oh yeah, and 2-for-2 passing for 55 yards and a touchdown, just for good measure.

Join the celebrity hot tub party before it overflows. 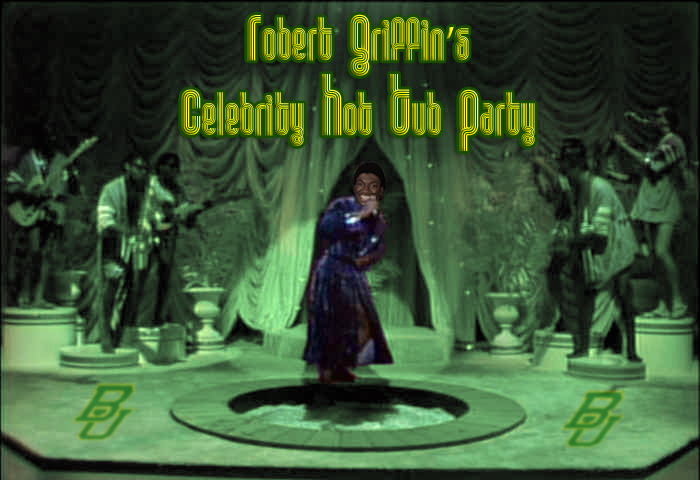 As for TCU ... I still have full confidence that this will be the typical TCU defense by the end of the year, but there was a lot of turnover from last season's incredible unit, and Baylor is an absolute nightmare opponent for an inexperienced defense.

The good: A&M can rush the passer. Granted, their two sacks of Kyle Padron was nothing to write home about -- Padron is basically a tackling dummy who occasionally throws a pass -- but when Padron was benched early on (after six pass attempts, he had been sacked twice and thrown two picks), J.J. McDermott came in, and he got sacked six times in 40 attempts as well.

The bad: A&M may not be able to defend the run as well as last year. SMU's Zach Line, perhaps the most underrated runner in the country (very agile for his size), averaged 5.8 yards over 22 carries. He's good, but there are plenty of other good runners on A&M's schedule.

More good: A&M responded. They took a quick 14-0 lead after the aforementioned picks, but SMU cut the lead to 20-14 and moved into A&M territory with ten minutes left in the first half. The Aggie defense forced a punt, and the offense drove 87 yards in 10 plays to go up 27-14. Then they forced a three-and-out and went 52 yards in six plays to go up 33-14. Ballgame. Run defense aside, there was little nitpick here. A&M averaged 9.5 yards per pass and 5.4 yards per rush against a solid defense, and ... again, eight sacks in 46 pass attempts. Nice.

In my Oklahoma profile, I wondered if new offensive co-coordinators Jay Norvell and Josh Heupel would change anything about Oklahoma's generally nuclear pace. Game one of the new era: 100 plays, 664 yards. Good god. Tulsa never stood a chance, especially not without star receiver Damaris Johnson (currently under investigation for felony embezzlement ... it truly was a terrible offseason for college football), but Tulsa did still average 7.4 yards per pass attempt, a decent total. But in the end, they generated only 97 yards on their first six drives and trailed 30-0 by the time they had a good drive. Alabama is still my own personal No. 1 team, but Oklahoma did nothing to detract from their own No. 1 ranking.

Ratterree Watch (tight end Trent Ratterree is the little brother of my high school best friend): 1 catch, 6 yards. He now heads to Tallahassee with the rest of the Sooners to take on the team that gave him his first career touchdown last year.

It took a while -- Texas led just 13-9 with six minutes left in the third quarter -- but eventually the Longhorns began to look like the Longhorns. A pair of Fozzy Whittaker touchdowns opened up a comfortable 34-9 win. In the end, Texas gained 506 yards (6.7 per play), and Garrett Gilbert's passing line (8.9 yards per attempt, 57% completion rate, 1 TD, 0 INT) was solid and aggressive. But it did take a while to get there. Two freshmen made their presence felt: five-star running back Maclolm Brown had 86 yards (5.4 per carry) and Jaxon Shipley (heretofore known as Colt McCoy's Roomate's Younger Brother™) had a pair of catches for 54 yards. The defense held Rice to 224 yards, always a solid total.

It's hard to call Oklahoma State "underachievers" when they scored 61 points (at least ten in each quarter) and beat UL-Lafayette by 27, but two pick sixes made a potential 41-point win a 27-point win. No worries here, though pick sixes are obviously never good. 86-year old Brandon Weeden has always been a bit of a gunslinger, as his three touchdowns and three interceptions can attest. His momentary lapses could make the difference between a good season and a great one. Other than the picks, though, there is a lot to like. Justin Blackmon had his customary 144 receiving yards, but tight endish receiver Tracy Moore had a nice day as well: seven catches, 112 yards, 1 TD. Joseph Randle rushed for 129 yards (5.9 per carry), the defense managed five sacks in 42 attempts (a 12% sack rate), and ULL managed just 96 yards on 29 plays in the first half.

Sorry. They were just hideous. I'm still pleased that they announced their infinite jersey color combinations right after I spent 3,000 words comparing them to Oregon, but still. Don't do this one again.

Missouri coach Gary Pinkel and offensive coordinator David Yost have an interesting decision to make moving forward. Mizzou's gameplan in the Blaine Gabbert years relied on efficient, horizontal passing to open up the middle of the field. But James Franklin doesn't have Gabbert's hand cannon. In fact, he doesn't have much of a cannon at all. Long out routes are not a very smart play, as Franklin learned in the third quarter of Mizzou's 17-6 win over Miami. He had a pass to T.J. Moe picked off, which set up Miami's only touchdown, then almost threw another pick on the same pass to Wes Kemp a couple of plays later. But with Mizzou leading only 17-6, Franklin threw a perfect seam pass to Moe, then found Marcus Lucas over the middle for the game-clinching touchdown. The middle seems to be his strength, and the middle is where he gained most of his 77 pre-sack rushing yards.

The way in which Mizzou attacks defenses may change soon ... or at least, it better, as the sideline-to-sideline offense generated just 291 yards against a well-coached-but-still-Miami Miami defense that played to the Tigers' tendencies. Including sacks, Franklin averaged just 4.4 yards per pass attempt. Defensively, Mizzou was one of the best bend-don't-break units in the country last year (West Virginia is the standard-bearer), and they kept at it on Saturday, playing soft until Miami reached Mizzou field position, then tightening up quickly and harshly. They head to Arizona State having lost two defensive starters, however: end Jacquies Smith and linebacker Will Ebner.

Woof. The question isn't why Iowa State almost lost to Northern Iowa ... it's how they won. Northern Iowa outgained the Cyclones, 385-328, and had a +3 turnover margin. But two separate fourth-quarter comebacks allowed ISU to escape. They took a 14-13 lead with 4:30 left, then immediately gave up an 80-yard touchdown pass, then came back down and scored the game-winning one-yard plunge with 0:40 left. Quarterback could be a nightmare for ISU this year. Jerome Tiller is academically ineligible, so the job fell to junior college transfer Steele Jantz, who did not live up to his badass name. His 41 pass attempts generated just 182 yards (4.4 per attempt), a 45% completion percentage and three picks. And unlike James Franklin, Jantz does not have a great defense backing him up -- UNI quarterback Tirrell Rennie rushed for 127 yards (7.1 per carry). If not for Jake Knott (13.0 tackles, 2.5 TFL/sacks) and punter Kirby Van Der Kamp (five punts, 51.2 average, three inside 20), ISU would have almost certainly lost.

Hooray, Kansas! Their meager, 42-24 win over McNeese State was actually only the third-worst Big 12 performance of the week!

The positive: KU gained 447 yards and may -- may -- have found some explosiveness in the running game. Freshman Tony Pierson broke a 47-yarder, and Pierson and fellow freshman Darrian Miller combined for 136 yards in 18 carries (7.6 per carry). Throw in sophomore James Sims (104 yards on 5.5 per carry), and you have a three-pronged backfield. The passing game was basically used as a surprise -- Jordan Webb threw just 10 passes, but they went for 146 yards and three touchdowns.

The negative: McNeese State gained 420 yards (5.6 per play). They completed 31 of 41 passes for 325 yards (7.9 per pass, 76% completion rate) and scored 24 points against KU's first-string defense. By the way: Chandler Harnish and Northern Illinois are heading to town this weekend.

Woof. K-State needed a 33-yard pass to Chris Harper with 1:39 left to a) break into double-digits in the scoring column and b) beat Eastern Kentucky by three. They outgained EKU by 174 (303-129) but fumbled five times (they lost four) and threw a pick. A minus-3 turnover margin will keep underdogs in the game. Heading into the game-winning drive, quarterback Collin Klein had generated 62 yards in 19 pass attempts (3.3 per attempt), but he completed three passes for 51 yards on said drive. On the plus side, nine KSU defenders registered tackles for loss, and even though this was just Eastern Kentucky, this defense probably looked more like the trademark "Bill Snyder Defense" from the 1990s than at any point since Snyder's return.

Brown Watch: Arthur had 4.0 tackles, 0.5 sacks. Bryce had 16 yards on three carries and one catch for three yards.

With 1:36 remaining in the first quarter, Texas Tech trailed Texas State, 10-0. They had run 10 plays for 27 yards and lost a fumble. TSU, meanwhile, had generated 86 yards in 20 plays. Over the game's final 46:36, Tech outscored TSU 50-0 and gained 478 yards to TSU's 245. We'll write this off as a false start. Tech dominated, throwing in some crazy fumbles luck (seven recoveries of eight combined fumbles) just for good measure. That TSU managed 263 pre-sack rushing yards is alarming, but otherwise this game will end up rather forgettable.