The Utah State Aggies And The Duke Of The WAC

Share All sharing options for: The Utah State Aggies And The Duke Of The WAC

As I mentioned in one of the first profiles of this long, arduous series, you develop random attachments to random teams in college sports. I always find myself rooting for North Texas because they were my Video Game Underdog of choice. And I almost always find myself rooting for Utah State, basically, because of this guy. Every March, I end up sticking up for the mid-major basketball teams that find themselves on the NCAA Tournament bubble despite semi-gaudy records. Utah State is the poster boy for such teams. They went 30-3 and ranked 20th in Ken Pomeroy's rankings this past basketball season, but they were saddled with a 12-seed in the NCAAs. No, they didn't play anybody, but that doesn't stop me from rooting for them.

I also love loyalty, and I love that USU's head basketball coach, Stew Morrill, has basically told all suitors from major conferences, "Thanks, but no thanks. I'm a Utah State guy." It makes me look at the navy blue and white in a positive light, even if they are basically the Duke of the WAC, incredibly successful and supportive on the basketball court, significantly less so on the football field. The Aggies' basketball attendance was almost half of their football attendance (not even Kentucky can claim that), and while they may win 25 roundball games per year ... they haven't won more than four football games in a calendar year since 2000 (5-6), they haven't finished with a winning season since 1996 (6-5), and they haven't won more than seven games in a season since 1974 (8-3), when Stew Morrill was beginning his coaching career as a 22-year old grad assistant at Gonzaga and current head football coach Gary Andersen was 14 years old. Yuck.

For what it's worth, Utah State is closer to playing decent football now than they have been in a while. The last three years, they have at least played at or near the level of your average WAC team, even if they've won just 11 games in the process. They battle through a downright cruel number of injuries in 2010, and they could be better for it this fall. At least, if they don't fall apart upon losing their interesting, athletic quarterback.

Heading into 2010, Utah State had actually managed a rare feat: they had improved for three straight seasons. But even the best rebuilding projects deal with occasional steps backwards, and an incredible number of injuries ensured that the Aggies' streak ended at three years. Losing their top two running backs and potentially their top two receivers to season-ending injury, they could not maintain any sort of consistency on the offensive side of the ball, and after looking solid in the opener against Oklahoma (that they almost beat the Sooners said more about the way Oklahoma played than Utah State ... but USU still played well), the roller coaster ride began. The offense was great against BYU and Nevada, heinous against Louisiana Tech, Hawaii and Idaho.

The defense, meanwhile, was rather consistent, but not in a great way. Strong performances versus Oklahoma and BYU were supplemented by touchdown-worse-than-average performances against virtually everybody else. But in matching their 2009 win total despite the issues, they arguably made quite a bit of progress. And as I always say, injuries are devastating in the present tense but rather beneficial in the future tense. 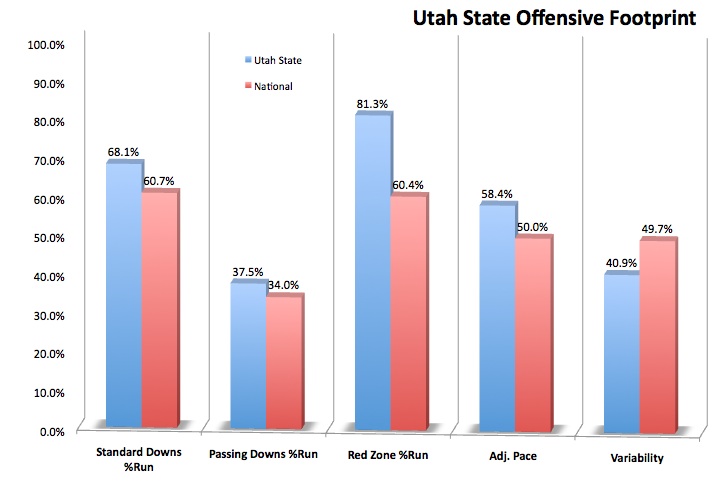 We typically talk quite a bit about last year in these piece, but for any number of reasons, "last year" doesn't tell us much about what is to come for Utah State. First of all, longtime starting quarterback Diondre Borel is gone. Not only is that an issue because none of his potential replacements have taken a snap in Logan, but also because whoever replaces him will be a major stylistic departure. Borel became more of a passer over time -- his pre-sack rushing yards dropped from 788 in 2008, to 578 in 2009, to 488 in 2010; meanwhile, his passing yards rose from 1,705 in 2008 to 2,885 in 2009 before falling in 2010 -- but he was still much more of a dual-threat guy than either of the players most likely to win the job this year.

Who are the replacement candidates? Junior college transfer Adam Kennedy and redshirt freshman Alex Hart. Kennedy was last seen posting a 141.9 passer rating and completing 65% of his passes at San Joaquin Delta College in California, while Hart is a bit of a local legend; he led the nation with 4,442 passing yards and 47 touchdown passes at Jordan High School in Draper, UT. Both of them looked great at times this spring (they combined for 494 yards on 38-for-60 passing in the spring game), though you never know how much of that was due to them or how much was due to a thin defense breaking in a new scheme. Regardless, there is hope -- and complete inexperience -- here. (My guess: Hart wins the job. When you've got two even players, go with the one with more years of eligibility remaining.)

The other reason we cannot glean much about 2011 from 2010: injuries. Running back Robert Turbin (1,175 yards, +9.0 Adj. POE in 2009) missed all of last season with a torn ACL, receiver Stanley Morrison (616 yards, 18.7 per catch, 51% catch rate in 2009) missed the season with a foot issue, starting receiver Matt Austin tore up his knee after one game and running back Michael Smith (153 yards, 6.4 per carry, +1.9 Adj. POE) made it two full games. Think about your favorite team for a moment. Now remove top two backs and receivers from the equation. How well would your offense do? All four of these players are back, however, and when combined with players who got extra reps in 2010, they could make for one nice batch of skill position players ready to help whichever quarterback wins the job. 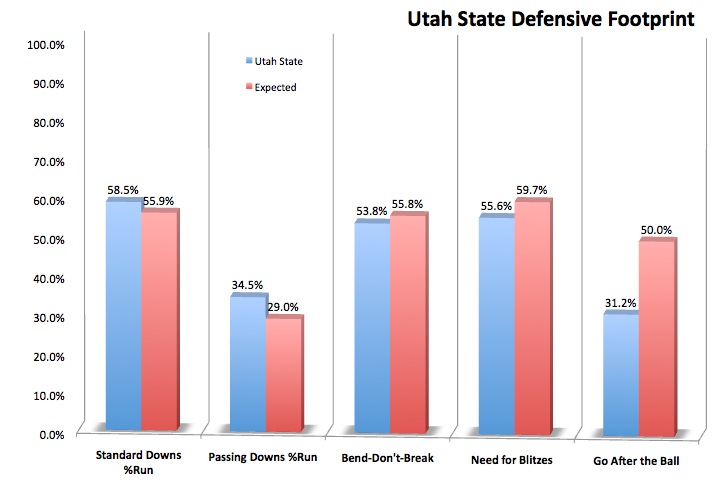 Really, defense was not the issue in 2010. At least, not entirely. The Aggies' pass defense was downright solid, but they couldn't overcome a feckless front four. So ... they changed it to a front three. Genius move? Completely misguided? We'll see. Anderson takes his own reins as defensive coordinator; they are reins he knows well after spending five incredibly successful seasons as Utah's D.C. His biggest change will be visible from the start: he's making the change to a 3-4. With some highly interesting pieces at linebacker and in the secondary, this gamble could pay off, but it won't mean much if the line is still a complete pushover (i.e. if a boatload of newcomers don't affect immediate change).

The line is choc full of transfers and newbies. There's 305-pound junior college tackle Havea Lasike ... 350-pound former SMU tackle Evan Huihulu ... three-star junior college ends Al Lapuaho (6-foot-3, 280) and Paul Piukala (6-foot-4, 235) ... redshirt freshman end B.J. Larsen (6-foot-5, 253 pounds). Making the change to a three-man line typically results in an at least a temporary side disadvantage, but Andersen has attempted to account for that as best he can. (Lasike and Huahulu are particularly intriguing.) The newbies will join a couple of ends -- Quinn Garner (32.0 tackles, 5.0 TFL/sacks, 1 INT) and Levi Koskan (27.5 tackles, 8.5 TFL/sacks) -- who had some sporadic moments but clearly needed assistance.

"Bad Bad Pain," by North Mississippi Allstars
"Hurt," by Nine Inch Nails
"Hurt Like Mine," by The Black Keys
"Hurt Me Soul," by Lupe Fiasco
"Hurts So Good," by John Mellencamp
"I Guess It Never Hurts to Hurt Sometimes," by Oak Ridge Boys
"It Don't Hurt," by Sheryl Crow
"Love Hurts," by approximately 4,000,000 different artists
"We Hurt Too," by Funkadelic
"A World of Hurt," by Drive-By Truckers 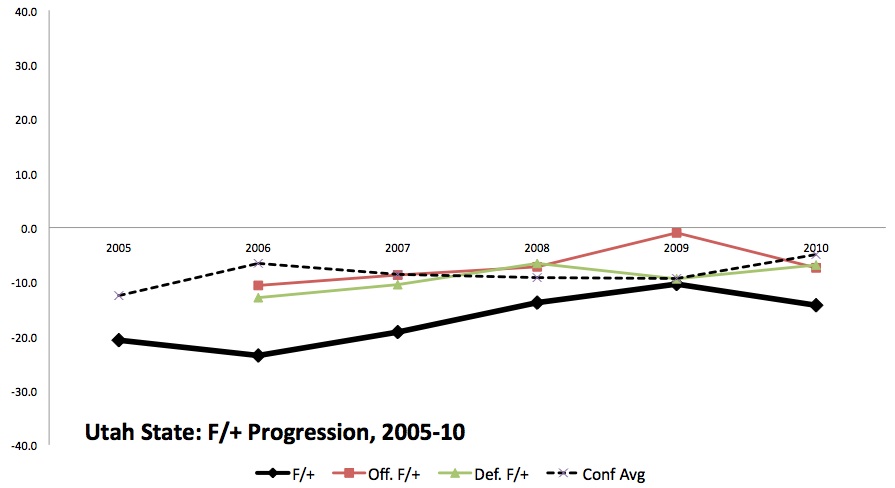 This is not a team projections will love. Our projections place them just 108th in the country, which makes sense considering their recent record, recent performance and recent recruiting. That said, they have two things going for them:

1) An incredibly easy schedule. Despite projecting as the 13th-worst team in FBS, they have a projected record of 5-7 and are given a 24% chance of finishing with six wins or better (17% chance at 6-6, 6% chance at 7-5, 1% chance at 8-4). Home games against Weber State, Colorado State, Wyoming, Louisiana Tech and San Jose State are all incredibly winnable, as are road games New Mexico State and maybe Idaho. The problem, of course, is that the other five games (@Auburn, @BYU, @Fresno State, @Hawaii, Nevada) are, to put it kindly, less winnable, meaning their bowl eligibility hopes hinge on winning almost every single winnable game. That's rough, especially for a team not used to winning more than four games in a season.

2) Gary Andersen. I really like him, and I think if anybody can bring football success to Logan, it's him. It just takes time. He has better depth to work with now than he has recently, and he has a strong defensive mind, but he is probably still a year or two away from seeing all the pieces put together in full.