Share All sharing options for: 2011 Football Preview: The Idaho Vandals And America's Underdog

NOTE: Confused? Don't miss the definitions and footnotes at the bottom. As always, if you don't like numbers, just skip to the words.

My wife refuses to watch the news when I'm around. I inevitably and instantaneously get annoyed with the "Party A says this; Party B disagrees" style of political reporting that assumes that the answer is always in the middle and both sides are equally crazy and stubborn, and I begin to argue with (and occasionally direct derogatory comments toward) poor, handsome Brian Williams. Then he throws to commercial, and since I live in the swingingest of swing states, Missouri, that means that, 15 months before the next election, I am privy to at least one attack ad per commercial break. And I really argue with those.

Just imagine if I were an Idaho fan. Not only have you had to watch your in-state neighbor Boise State become a rousing college football success, but you have to listen to them constantly getting described, basically, as America's Underdog, the scrappy little team from the northwest that hooked-and-lateraled its way into the country's heart. You, however, know better.

"This is a great example of why my wife and I no longer travel to Moscow games,'' [Boise State president Bob] Kustra said. "It's a culture that is nasty, inebriated and civilly doesn't give our fans the respect that any fan should expect when visiting an away team. ... I don't think at Boise State you're going to find that ... For me, this is not about football. For me, this is a cultural issue."

That's basically one "Little Sisters of the Poor" reference away from being the most perfectly blue-blooded (in Boise State's case, really, really blue) thing an academic has ever said in reference to sports. When you obtain a high level of success, your nearby rivals are going to resent you for it. (As a member of the Missouri fanbase that watched Nebraska beat his team like a stepchild for 25 years, I know of what I speak.) And, being sports fans, they're probably going to say pretty nasty things from time to time. But thinking you are "culturally" above somebody from the same region and state, all because of sport (and, probably, a few rural-vs-urban differences)? That's a strong sign that you've made it into the ruling class and are no longer to be treated as an underdog.

(Also a sign you've made it: fielding a team as good as Boise State's last year. But I'll talk about that during the Boise State profile.)

(One more thing: I'm okay with anything that results in students spelling out "I-N-E-B-R-I-A-T-E-D-!" in body paint. In fact, I encourage it. Good times.)

If we're talking honestly about who the National Underdog should be, there is but one candidate: the Idaho Vandals. Scoffed at by their more successful neighbors as both drunk and uncivilized ... cast aside as a one-time conference mate of USC, et al, because they weren't competitive enough ... led by a coach whose glorious voice sounds like that of a 1980s professional wrestler ... forced by circumstance to play their games both in potato country (the most American of vegetables for their innate fryability), and in a football stadium that resembles a beautiful cross between a basketball field house and a plant that processes frozen french fries. That's about as American as it gets, right?

Oh right, I'm supposed to be profiling the team itself. After the jump.

After the rousing success of a 2009 season that saw them win eight games and a bowl (and oh, what a bowl win it was ... the only way it could have been better would have been if the name had already been changed to the Idaho Potato Bowl) for the first time since 1998, Idaho followed up by putting a similar product on the field but going just 6-7. Tight losses at Colorado State and Fresno State doomed their bowl eligibility; a year after going 5-1 in one-possession games, they went just 1-2. The defense was sporadically competent, and the team was perfectly decent over the first half of the season, but the offense faded. They suffered from the loss of star receiver Daniel Hardy during the loss to Hawaii, but really, the slump had begun two games prior.

Whatever the cause, they head into 2011 without star quarterback Nathan Enderle, leading rusher Deonte' Jackson, and Enderle's top three receiving targets. But there is at least a glimmer of realistic hope that the replacements can accomplish as much or more than those for whom they were understudies last year. 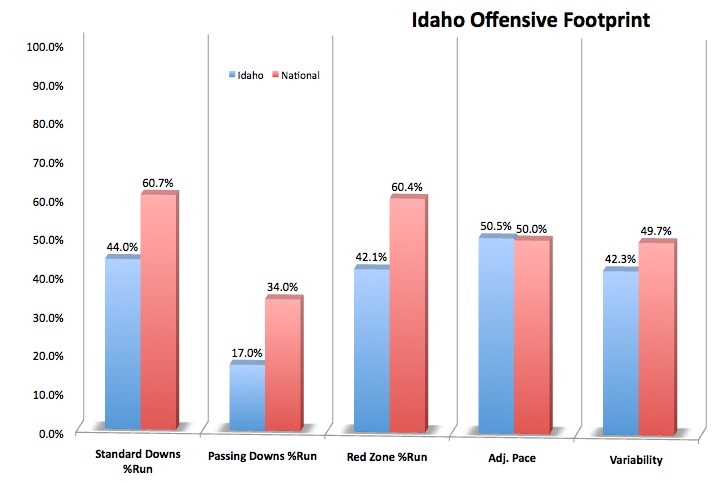 To truly be America's Underdog, you need to run some wonderfully underdog-friendly offense. Idaho did not necessarily do that in 2010, but they did pass more frequently than almost any team in the country, so that's a start. Nate Enderle (3,314 yards, 6.9 per pass, 57% completion rate, 22 TD, 16 INT), who seemed like he was the starting quarterback in Moscow for 13 years, was done in at times by constant pressure and a completely inept running game. Enderle was able to engineer quite a few rabbit-out-of-hat plays on passing downs to keep drives going, but with a pass-first philosophy and a run game unworthy of attention from opposing gameplans, he was asked to perform far too many magic tricks. Now senior (and loyal backup) Brian Reader (568 yards, 8.0 per pass, 59% completion rate, 5 TD, 1 INT) takes over. He was strong in mop-up duty (we still call it "mop-up duty" when referring to the team that got blown out, right?), and he still has some interesting targets in the passing game, but they are even less tested than he is.

There are weapons remaining here, though anytime you lose a quarterback who was so effective on passing downs, it gets a little scary; you never know if the next guy is going to be as good a magician. Just ask Texas. 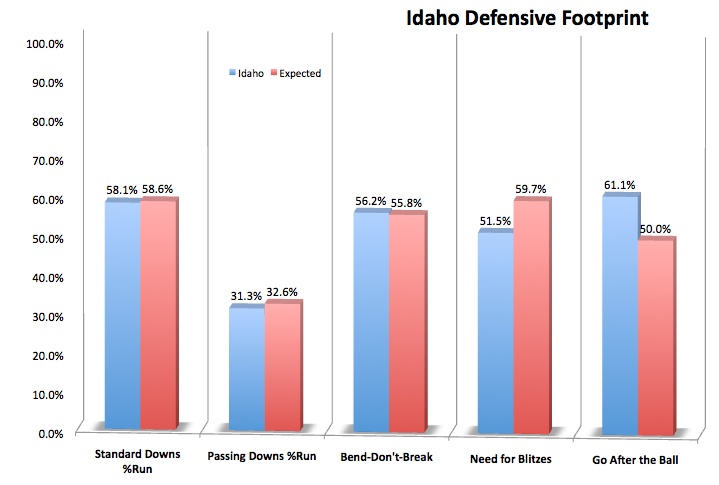 Say this much for Idaho: they go for it. And with a coach who sounds like a professional wrestler, that should not be a surprise. Idaho blitzed, blitzed, blitzed and hacked away at the ball at all times. It didn't work all that well, but they didn't let oft-spectacular failure deter them. (Again, nothing more American...) The Vandals' top four returning linebackers combined for a fantastic 36.5 TFL/sacks, but for every play they made, they got gashed twice, which is how you post some great stat lines and still rank 103rd on this list.

Since I'm totally committing to the theme here...

Idaho ranked dead last in overall F/+ in 2008, and they made a bowl in 2009. As a whole, how do teams typically do when they hit rock bottom? 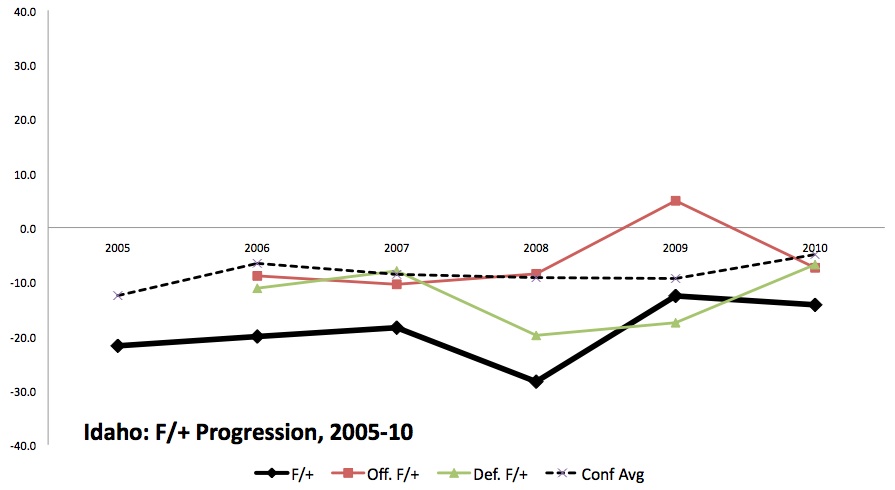 This is an enjoyable team. They wing the ball around on offense, they attack (for better or worse) on defense, and their coach is fantastically fun to listen to in interviews. But are they capable of actually playing good football? How good? Our Football Outsiders Almanac 2011 projections are not optimistic about Idaho's prospects this year, giving them just a 13% chance of reaching bowl eligibility. But let's look beyond this season for a moment.

Though I can't speak to the cultural differences of different portions of the great state of Idaho (granted, Moscow is as much a part of Montana, Oregon and Washington as the rest of Idaho), I can tell you about the differences in quality between the Idaho and Boise State football programs. The Vandals cannot compete with their neighbors to the south, but that's just as well because they're no longer conference mates with the Blue-Blood Broncos. In fact, Idaho faces an opportunity of sorts over the next few years. Boise State has left the WAC, and Hawaii, Fresno State and Nevada are soon to follow. That leaves Idaho, San Jose State, Louisiana Tech (seriously, can La. Tech and UTEP just flip conferences so I stop getting confused?), New Mexico State, Utah State (for now), and soon-to-be newcomers like UT-San Antonio and Texas State. Somebody could establish themselves as the class of the new (and incredibly weak) conference. Could America's Underdog fill the void?