Share All sharing options for: 2011 Season Preview: The Hawaii Warriors And Identity

NOTE: Confused? Don't miss the definitions and footnotes at the bottom. And as always, if you don't like numbers, just skip to the words. This marks the final of 120 profiles. Time for the Gatorade bath.

In chess, there are strategies, and there are tactics. Strategies are general approaches to life -- arranging the board to accommodate for your favored tactics. They are long-term approaches you put in place because you think they give you the best chance to succeed. Tactics, meanwhile, are short-term. Forks, skewers, etc. [...]

Like chess, football usually boils down to strategies and tactics in the end (unless, as is often the case, one team's talent and athleticism is too great for the other, like they're starting with more pieces on the board). Who you decide to place on the field, and where you place them, constitutes strategy. 4-3 defense? 3-4? 3-3-5? Spread offense? Pro-style? Wishbone? Your strategies are your "base, core plays," your approach, your mindset. Tactics, then, are what you actually do once you have established your strategy: Who do you use to blitz and when? When (and how often) do you call your constraint plays to complement your base plays? You put yourself in position to win with strategy; you win with tactics.

Identity, knowing and committing to your chosen strategy, can be so important, especially in areas of the country that are less than fertile when it comes to big-time football. Identity alone doesn't make you good -- it isn't hard to come up with an example of a terrible wishbone or run-and-shoot team -- but it is certainly part of the battle. And in 2011, few programs have established a stronger identity than the Hawaii Warriors. On offense, they are going to unabashedly throw the ball; on defense, they are going to attack you and try to hit you as hard as they can. If you keep your poise, and if you are athletic enough to make them pay for the risks they take -- they don't have a natural athletic advantage over many of the teams they play, so there is certainly risk involved in ferociously attacking -- then you can beat them. But they stick to what they know, and after a two-year crater following head coach/miracle worker June Jones' departure to SMU, Hawaii was back in the winner's circle in 2010. They won ten games, played as well as almost anybody in the month of October, and reestablished themselves as a solid, steady mid-major program.

Many members of last fall's experienced squad are gone, meaning this year is a big one for fourth-year head coach Greg McMackin. Being a good coach means achieving success with multiple cycles of recruits. One cycle is out the door; do the replacements have what it takes to maintain Hawaii's momentum? And will having such a strong identity help them out?

Like San Diego State, Hawaii was an incredible team in the middle of the season. After a slow start that saw them both lose two games and deserve to lose two games, Hawaii got as hot as any team in the country. It started with a whipping of Charleston Southern but continued against three solid conference opponents. They took out Louisiana Tech and Fresno State by 20+, then handed Nevada their only loss of the season. The defense was mostly dominant in this stretch, but it faded again in November. 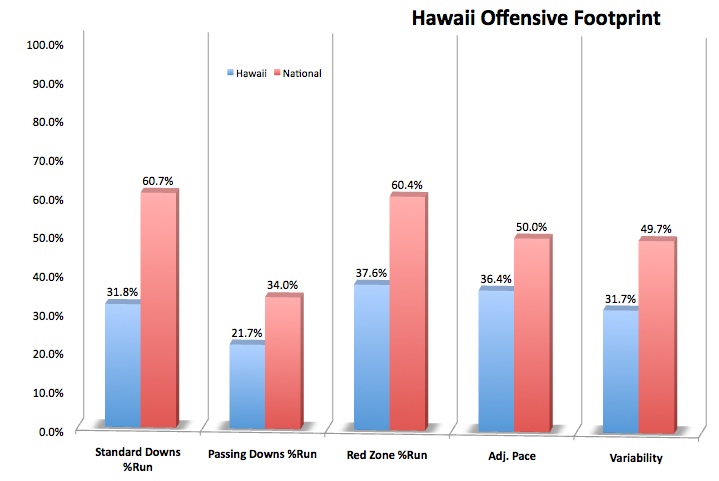 One of the interesting dilemmas when attempting to gauge an offense like Hawaii is determining the difference between players who are productive because of the system and players who are really, really good. At first glance, it appears that Green and Salas in particular were excellent, and it might be difficult for the Warriors to replace either of them. Green almost doubled up everybody else in the country in terms of Adj. POE; as a Hawaii running back, you are going to get plenty of opportunities to take advantage of defenses gearing up for the pass. But what Green did, averaging over eight yards per carry and almost 11 yards per pass target, was incredible. He suffered a bit from fumbleitis, but both his vision and speed were outstanding.

With backup Chizzy Dimude also gone, the running back duties will fall to big redshirt freshman Joey Iosefa (6-foot-0, 240 pounds) and junior college redshirt Sterling Jackson. Iosefa could bring an interesting power aspect to the offense (perhaps not unlike Zach Line at SMU), but we'll see if he has the speed necessary to take full advantage of a distracted defense. Moniz has some wheels of his own (331 pre-sack rushing yards, +12.5 Adj. POE), but he cannot be expected to carry the rushing load.

(And this says nothing of an offensive line that must replace four starters, including second-team all-conference picks in guard Adrian Thomas and tackle Laupepa Letuli. Left tackle Austin Hansen accounts for 20 of Hawaii's 21 career starts. Then again, the offense was terrible in terms of line blocking, anyway, so regression isn't guaranteed.) 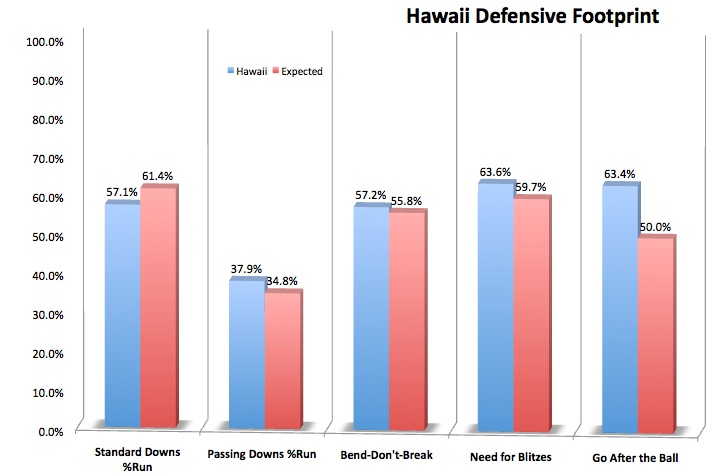 As strong as Hawaii's offensive identity is, their defensive identity is almost as strong: they mercilessly attack the run on standard downs, and blitz on passing downs. Opponents know what they're going to do -- the Warriors faced more standard downs passes and passing downs rushes than the national average -- but in 2010, Hawaii was successful enough that predictability didn't matter. They will attack, and they will go after the ball at all times, and if you are not composed enough to handle it, they will make big plays against you.

Hawaii's was a rock solid mid-major defense, playing strong against the run and, at the very least, limiting big plays in the passing game. They weren't good enough at getting to the quarterback to make their blitzing altogether worth it, but when your talent is somewhat limited you make sacrifices. The Warriors limited big plays on standard downs and played relatively efficiently on passing downs (while giving up some big plays).

This season, Hawaii should continue to field a solid unit. Seven of the top nine defensive linemen return, as do the top two linebackers. The secondary is a bit of a concern, however. A unit that was not particularly deep a year ago, loses four of its top seven contributors. Mana Silva (67.5 tackles, 3.0 TFL/sacks, 8 INT, 7 PBU) was a tremendous free safety, and Jeramy Bryant (43.5 tackles, 2.0 TFL/sacks, 4 INT, 8 PBU) was a strong playmaker at cornerback; both are gone. Strong safety Richard Torres (48.5 tackles, 2.0 TFL/sacks, 2 INT, 5 PBU) returns, as do corners John Hardy-Tuilau (40.0 tackles, 5.0 TFL/sacks, 3 PBU, 3 FF as a freshman) and Kawika Ornellas (20.5 tackles, 1 PBU), but there is some work to be done here.

Because I haven't used nearly enough Stooges music in this series, we'll cap it with some "Search and Destroy." "I am the world's forgotten boy/the one who searches and destroys" summarizes the UH defense pretty well.

Almost no team in the country has consistently committed to the pass as much as Hawaii. 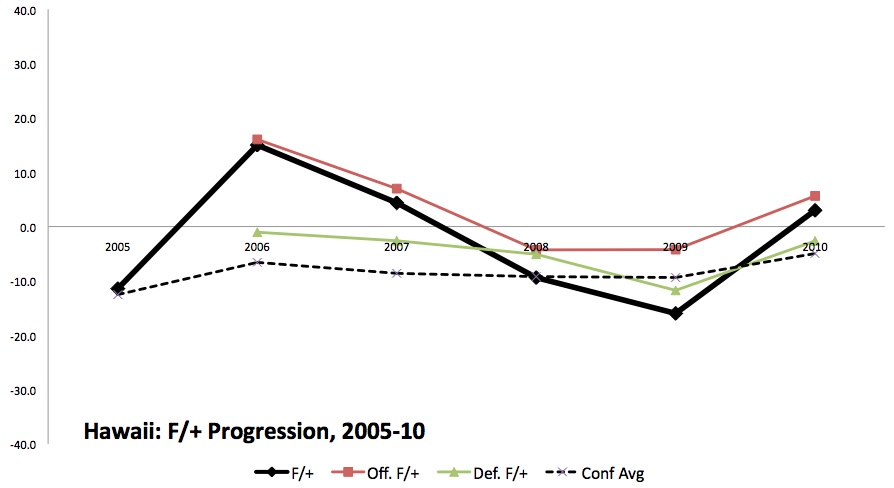 Nine starters returning. It is difficult to overcome that. But here's where Hawaii's strong identity could pay off. The new players know exactly what is expected of them, and ... well, Hawaii would gain quite a few yards yards and score a lot of points even if they returned zero starters. The question is, will they score the right points? Will they be able to stand up to Nevada in Reno and take down Fresno State at home?

The Football Outsiders Almanac 2011 gives Hawaii a 28% chance of finishing 6-1 or better in a weakened WAC and a 1% chance of going undefeated. That is both showing a lot of respect for Hawaii's recent accomplishments and reminding us just how soft the WAC is. The Warriors are heading to the Mountain West next season, but in the meantime they are timing this transition team well; despite all of their personnel losses, they could quite possibly ride a strong identity to a sneaky conference title.