Teams No. 6 and 9 were led by none other than Rocky Long, who inherited the San Diego State head coaching position when Brady Hoke quite predictably took the Michigan job. Long built a steady program at New Mexico, but his last few teams did not feature nearly the offensive explosiveness the Lobos displayed when players like Hank Baskett (shudder) were in uniform. But they did have that wonderfully confusing, underdog-friendly 3-3-5 defense upon which Long has built his name. And almost because of that alone, they won nine games in 2007.

At first blush, then, San Diego State seems like the perfect team for Long to inherit. The Aztecs will be running Long's 3-3-5 for the third season this fall, and in theory, the offense could thrive simply because of the presence of a good quarterback (Ryan Lindley) and a potentially great running back (Ronnie Hillman ... shudder). I do not know what SDSU's long-term prognosis may be with Long (after all, he did not exactly leave New Mexico in good shape upon his departure), but this strikes me as a short-term hire, and in the short-term, this could work out well. That is, as long as an incredibly inexperienced receiving corps doesn't drag them down. Their leading returning wide receiver has exactly four more career catches than I do.

San Diego State's 2010 season consisted of three unequal sections. Over the first six games of the year, the Aztecs suffered oh-so-close losses to Missouri (via a 70-yard touchdown pass in the final minute) and BYU (via controversial non-fumble and pass interference call) but played at a generally high level, especially considering the depths to which the program had fallen in recent years. After a late-October slump in which they sleep-walked through wins over the dregs of the Mountain West, SDSU found fifth gear in November. They gave TCU their only regular-season challenge, scoring two late touchdowns and forcing the Horned Frogs to hold on for dear life. Then they took a 10-point lead into the fourth quarter against Utah before fading late. They destroyed UNLV and made a statement in the Poinsettia Bowl against Navy to finish off an incredible final four games.

Considering it was their first winning season in 12 years, the 2010 campaign was a successful one no matter how you slice it. But the Aztecs' 2-4 record in one-possession games, and their four near-miss upset bids cast a bit of a "what could have been" pall, as did Hoke's departure. Still, not only did SDSU matter for the first time in quite a while, but ... they mattered in the right way. They were athletically, physically competitive. They had speed and pro potential on offense and began to grasp the intricacies of the 3-3-5 on defense. This was a strong team.

When combined with San Diego State's basketball run -- the hardcourt Aztecs went 34-3 and advanced to the Sweet Sixteen -- this was a pretty damn good year to be an Aztec fan (despite the heartbreaking football losses), eh? 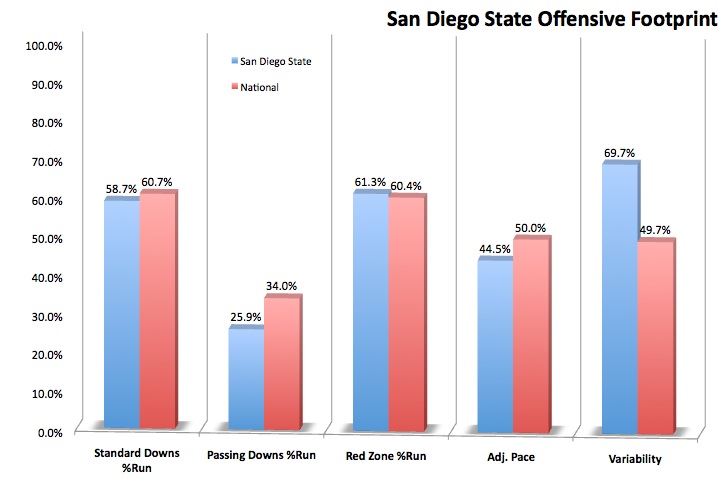 Lindley and Hillman are back, but the main area of concern should be quite obvious. Sampson and Brown are gone, as is RB/WR Brandon Sullivan (383 receiving yards, 124 rushing yards); plus, No. 4 guy Dominique Sandifer (263 yards, 11.4 per catch, 46% catch rate) was lost for the season with injury (as was redshirt freshman Jay Waddell). That leaves tight end Gavin Escobar (323 yards, 11.1 per catch, 63% catch rate, 4 TD) ... and, basically, that's it. The latest depth chart listed the following players on the wide receiver two-deep: sophomore Dylan Denso (a walk-on who caught four passes last year), sophomore Colin Lockett (a defensive back last year), redshirt freshman Ezell Ruffin and freshman Paul Pitts. Yikes. Sometimes youngsters come out of nowhere and surprise you, but you rarely want to count on that. The Aztecs have no choice.

A dropoff in the passing game is alarming because of just how incredible Lindley and company were on passing downs last year. SDSU was a below-average offense on standard downs, as much because of poor run blocking as anything; but Lindley, Brown and Sampson consistently bailed themselves out on passing downs. Now, when Lindley drops to pass on 3rd-and-7, he's going to see no recognizable, reliable weapons running routes. Who makes a play? 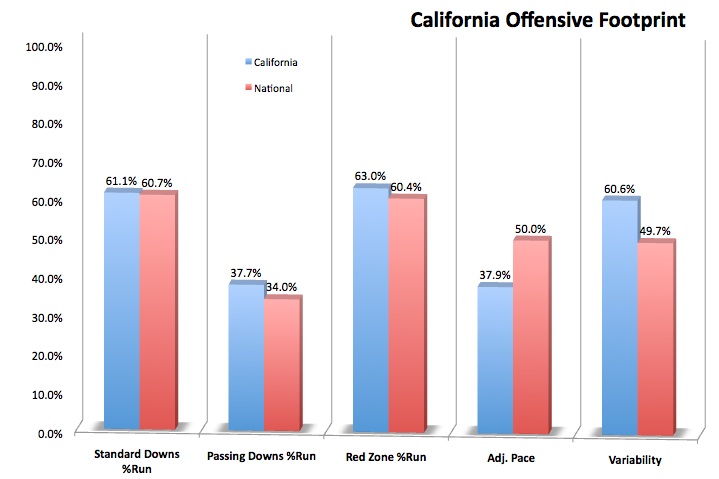 California tended to run a bit more than SDSU did last year; this is something that, by necessity, Ludwig may duplicate this year. (Then again, they are evidently trying not to tinker too much with last year's attack.) 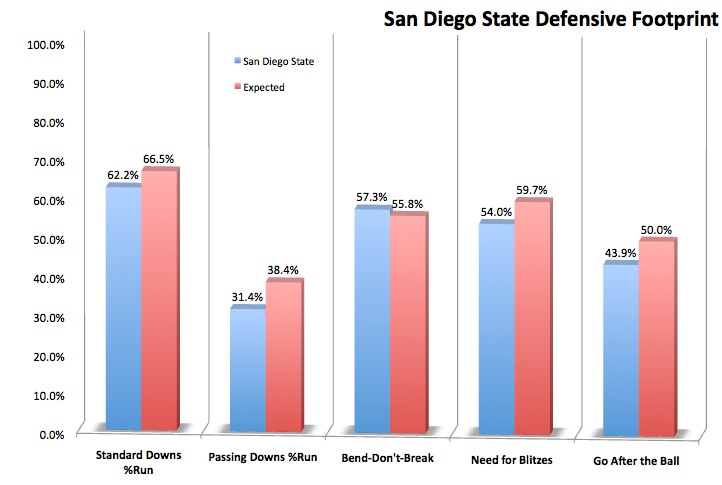 Since Long waltzed into San Diego two years ago, the Aztec defense has taken two giant strides toward respectability. By no means were they a truly strong defense last year, but...

Pretty much the definition of tangible improvement, no?

The defense was still finding its bearings in 2010. Opponents would struggle initially in the first quarter, then surge in the second when they got used to playing against this orthodox attack; similarly, they struggled on first-and-10 before getting back on schedule on second-and-long.

Really, the characteristics of this different do not equate with our assumptions of a three-man line. SDSU was better against the run and stood up well against run blocking, and that was their largest strength. It is probably a bit alarming, then, that four of the top five linemen are gone. Their three top ends -- Ernie Lawson, Jacob Tauanuu and B.J. Williams (combined: 57.0 tackles, 15.5 TFL/sacks) -- are gone, and one of their two primary tackles (Neil Spencer) is academically ineligible. The back eight on the defense will probably improve, but the biggest strength will most likely be weaker.

Credit Long, then, for securing the signatures of a couple of strong, three-star defensive ends: Sam Meredith and Jon Sanchez. They will vie with the likes of J.J. Autele (11.5 tackles, 3.5 TFL/sacks) and Larry Gibbs (7.5 tackles, 1.5 TFL/sacks in seven games) for playing time on the outside (when Gibbs comes back from a foot problem, anyway), while unknown backups will get in line behind the solid Jerome Long (23.0 tackles, 6.0 TFL/sacks) at tackle.

This was the first time since 1996 that the Aztecs won at least eight games in a season, so ... how about ten great songs from 1996?

"Bulls On Parade," by Rage Against the Machine
"Can't Knock the Hustle," by Jay-Z
"Elevators (Me and You)," by Outkast
"Fu-Gee-La," by The Fugees
"Hotel Arizona," by Wilco
"How Do You Want It," by 2Pac
"Jack-Ass," by Beck
"Off He Goes," by Pearl Jam
"Say Goodbye," by Dave Matthews Band
"Stickshifts and Safetybelts," by Cake

So among teams that actually threw a lot (i.e. not Navy or Air Force), San Diego State had the most explosive Top Two (Vincent Brown and Demarco Sampson) in the country. The least explosive: Indiana (247 targets, 1,538 yards, 6.2 per target). 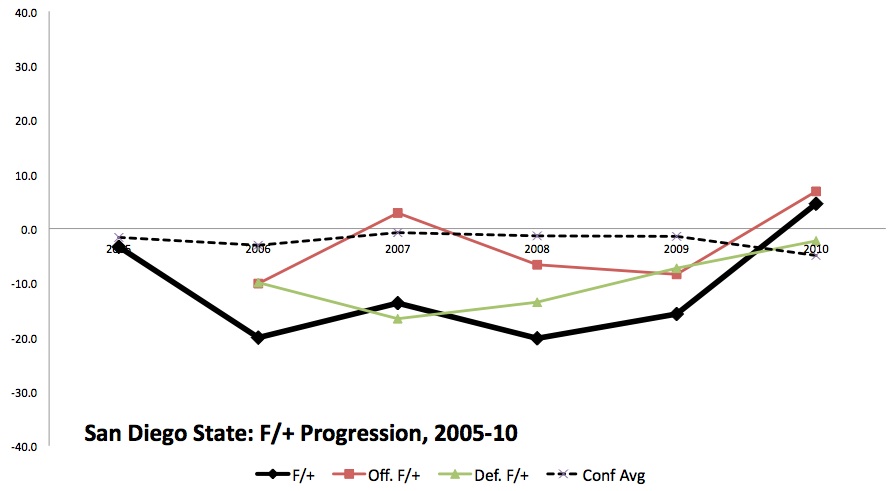 There is quite a bit to like about this team -- Lindley, Hillman, an experienced offensive line, options at linebacker, deep(ish) secondary -- but the two holes are glaring. It isn't hard to assume a drastic dropoff in the receiving corps, and the defensive line is alarmingly thin. The schedule is built in with six likely wins -- Cal Poly, at Army, Washington State, Wyoming, New Mexico, at Colorado State -- and another bowl bid is likely (95%, according to the Football Outsiders Almanac 2011), but because of these extreme weaknesses, it is difficult to gauge their ceiling.

Rocky Long has built a strong track record through his career (among other things, he is the winningest coach in New Mexico history), and under his leadership it is rather likely that, at least in the short-term, the upward momentum Brady Hoke built should at worst plateau. Despite being located in a relatively fertile recruiting area, San Diego State has never been to back-to-back bowl games, but that should change in 2011. Whether Long can sustain this newfound power over the long haul, we'll see. But then, two years is pretty "long haul" when it comes to SDSU's football history.