Share All sharing options for: The Big 12's Power Trends

As soon as I hit Publish on yesterday's SEC trends post, I realized I wanted to do all the other major conferences too. Hopefully I have time this week to do just that. Next up on the list: my home conference, the Big 12, which, at this precise moment in time, still exists. And look at me, getting all fancy with the graphs this time around!

Quick reminder: for these trend charts, we're using my S&P+ and Est. S&P+ measure. In a nutshell, Est. S&P+ is a pretty simple measure comparing the points a team scored and allowed to the averages of the opponents they played (and their opponents' opponents, etc.). What you see below, then, is their percentile performance in this measure and, after 2004, my own S&P+ measure (which does the same basic thing, only using play-by-play data instead of the less reliable points scored). So there you go. And the dotted line in the charts is a team's 10-year average. 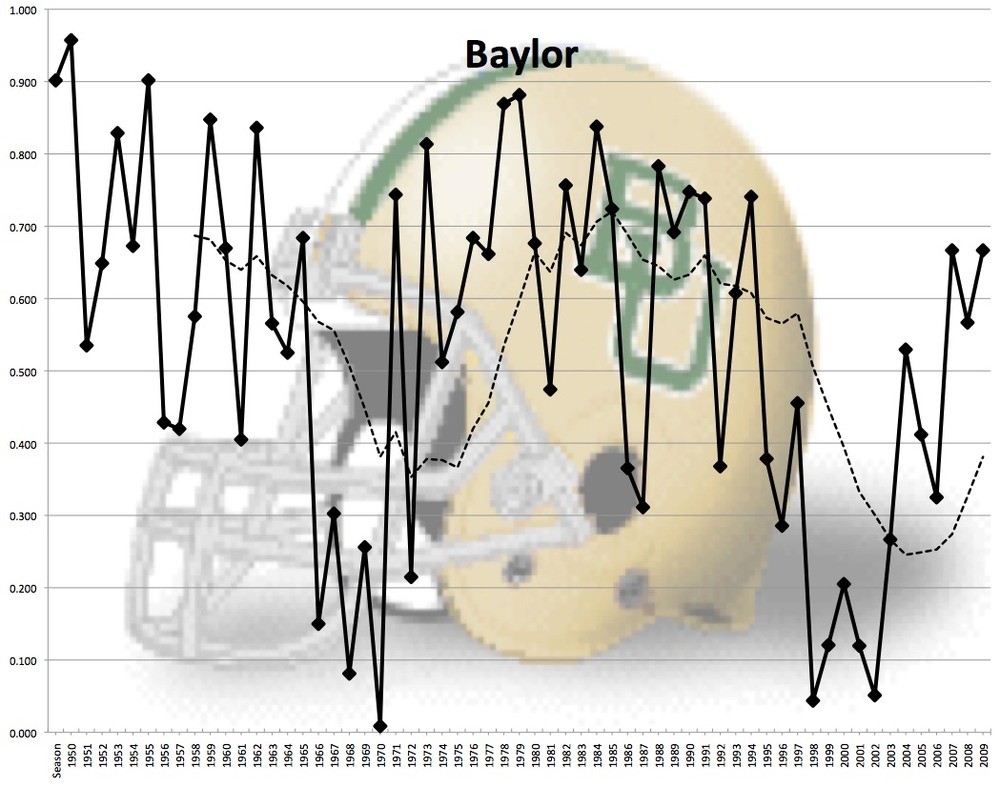 At the time of the Big 12's creation, Baylor certainly wasn't an amazing program, but considering TCU had cratered and SMU was still coming off of the death penalty, the selection of the Bears for the 12th Big 12 spot wasn't as odd as it would seem a few years later, when Baylor fell apart and TCU began to surge. Timing is everything, and for the Horned Frogs, the timing was terrible. Baylor's 1990s-2000s crater was a bit more sustained than a similar, worse crater in the late-1960s, but they rebounded from that one pretty well. As long as Art Briles is Grant Teaff II ... hey, no worries! 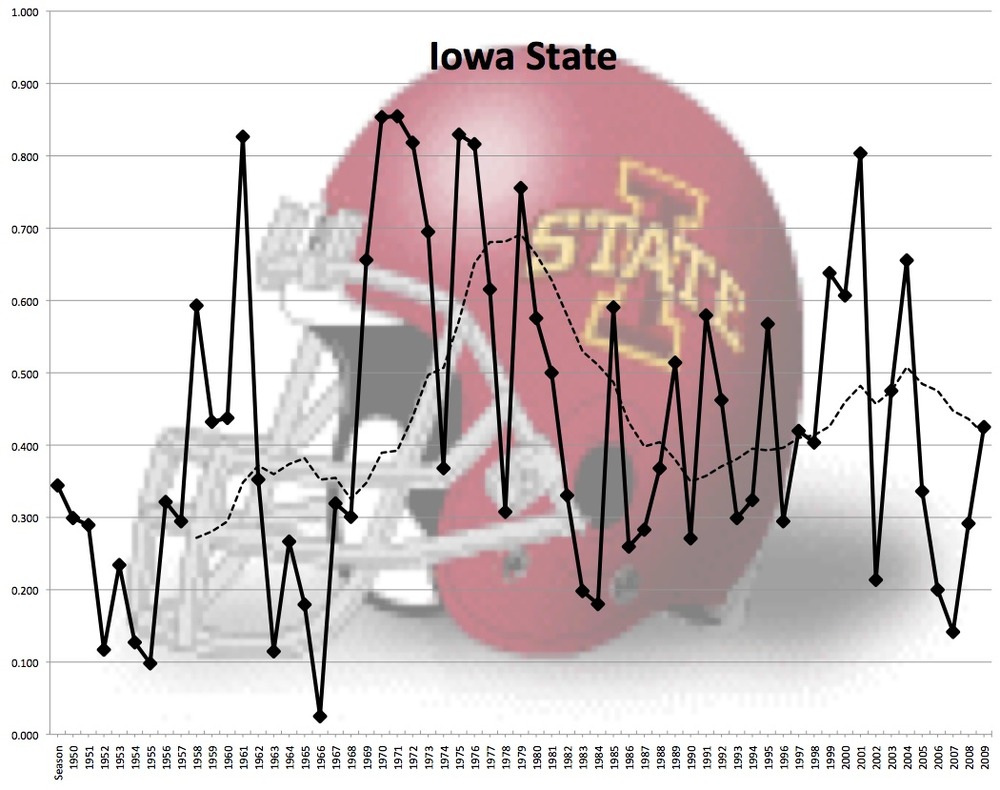 Your Did You Know of the day: in back-to-back hires, Iowa State brought in Johnny Majors and Earle Bruce to coach the 'Clones in 1968 and 1973. And as a result, they actually became a damn strong program for a decade or so there. Since then, success has been, to say the least, sporadic. 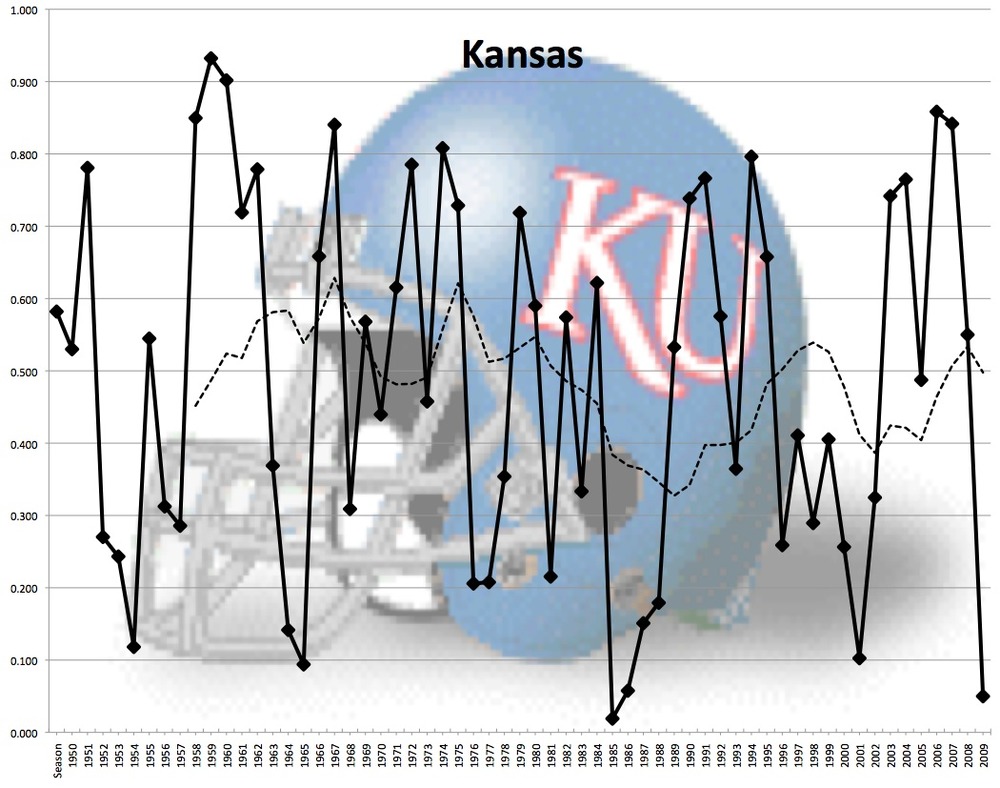 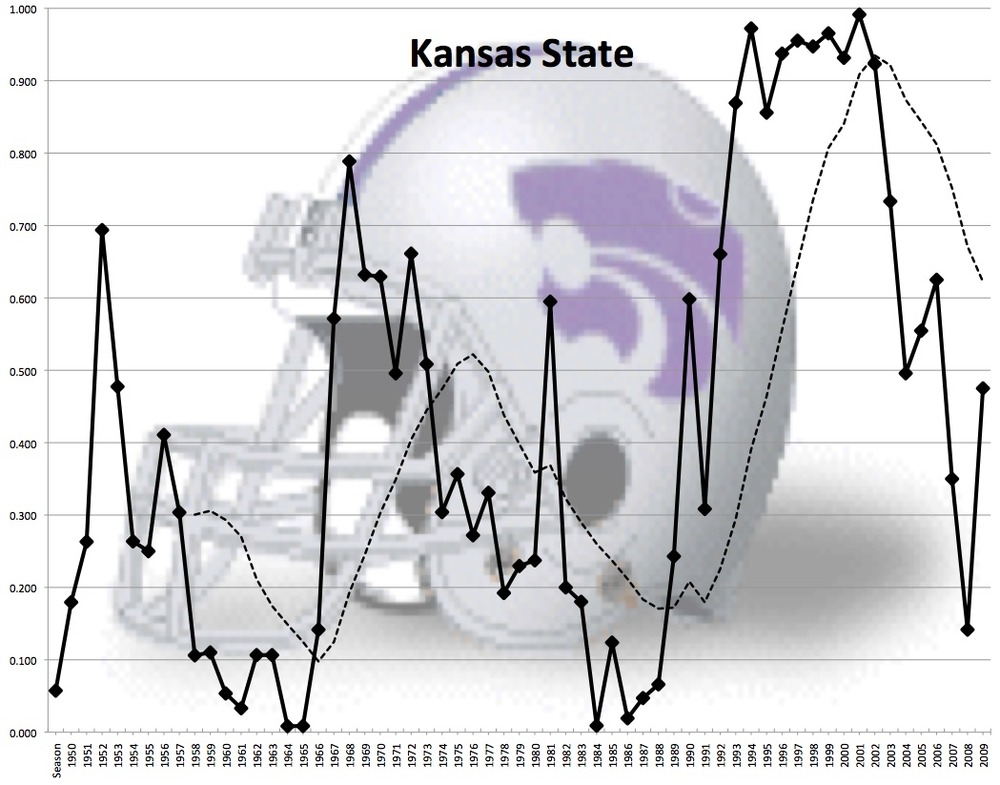 Bill Snyder is an incredible, incredible coach. Or at least, he was the first time around. 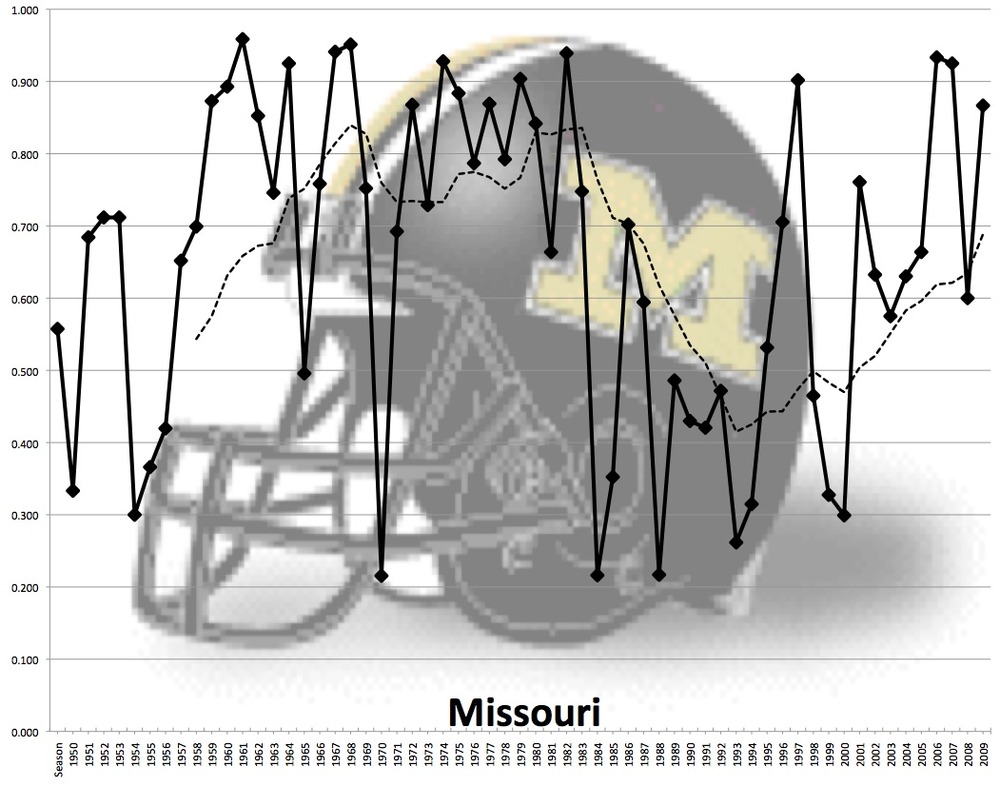 Mizzou was one of the country's premier programs in the 1960s and pulled off a series of huge upsets in the 1970s. Yadda yadda yadda, then the 2000s happened, and that was pretty cool. Using 10-year averages, it takes a while to completely rebound from some awful play, but the Tigers are certainly on the fast track. To say the least, 2010 was better than 2000... 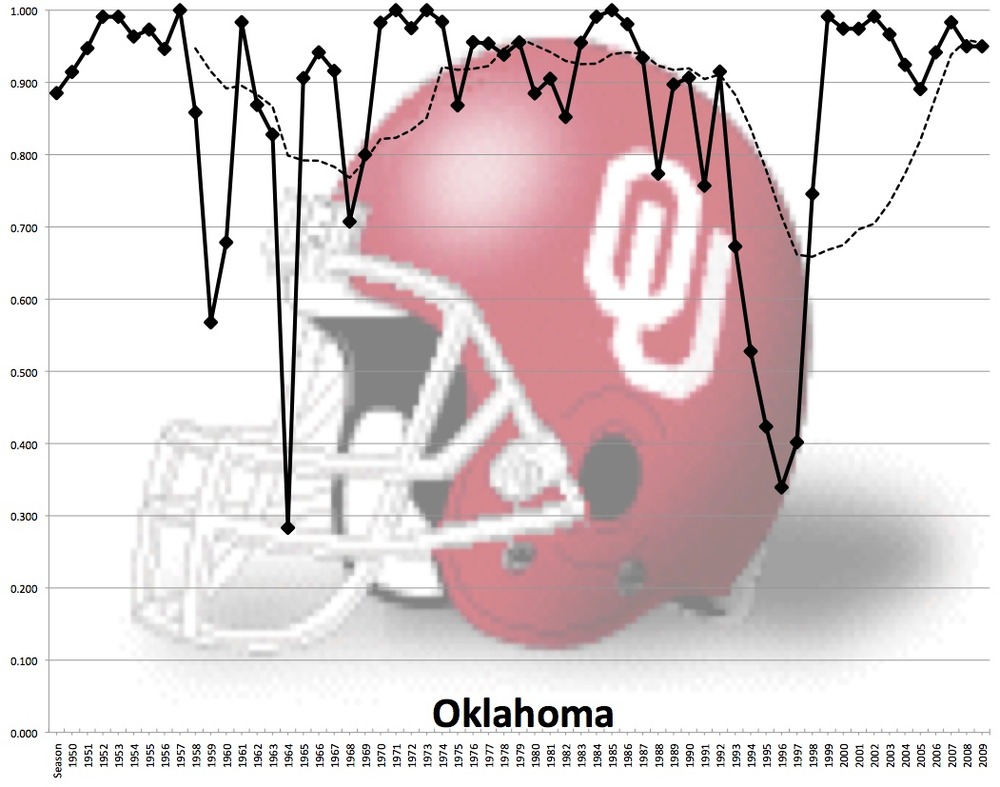 If we're considering the 90th percentile the "elite" mark (that basically represents the nation's Top 12 or so), then OU has produced an elite product in 10 of the last 11 years. No other program can say that -- not Florida, not Alabama, not Texas, not USC, not LSU, etc. 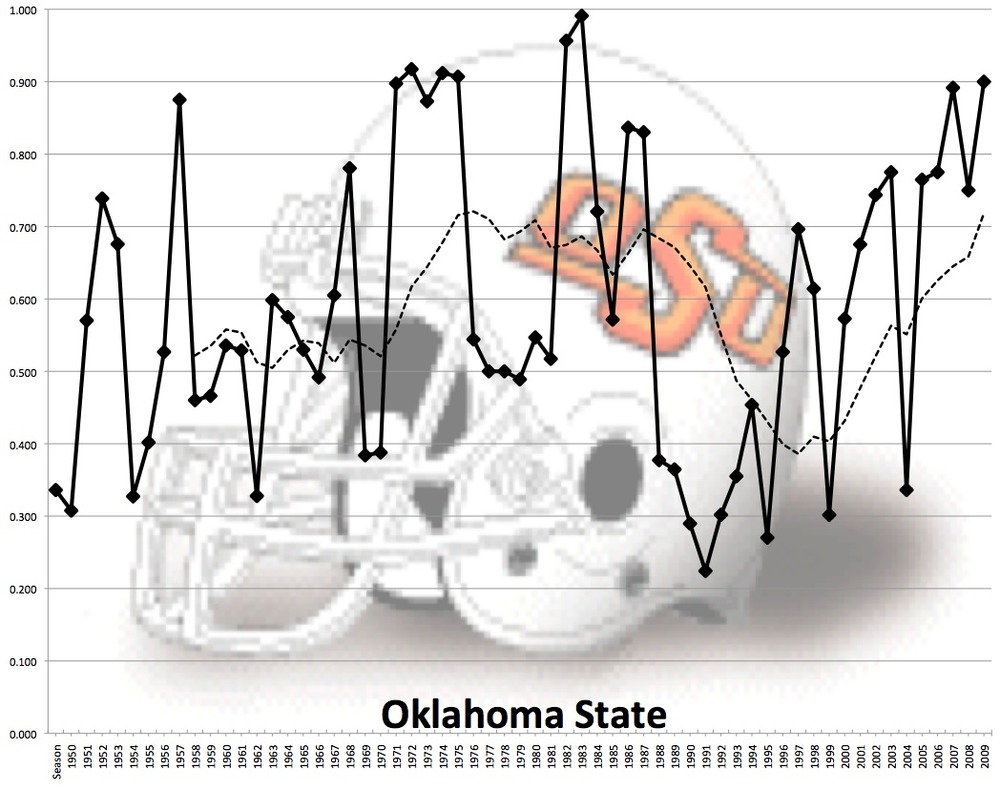 Jimmy Johnson produced a couple of hellacious teams in the mid-1980s, and OSU's been trying, through some major fits and starts, to get back to that elite level ever since. They're right on the borderline heading into 2011. 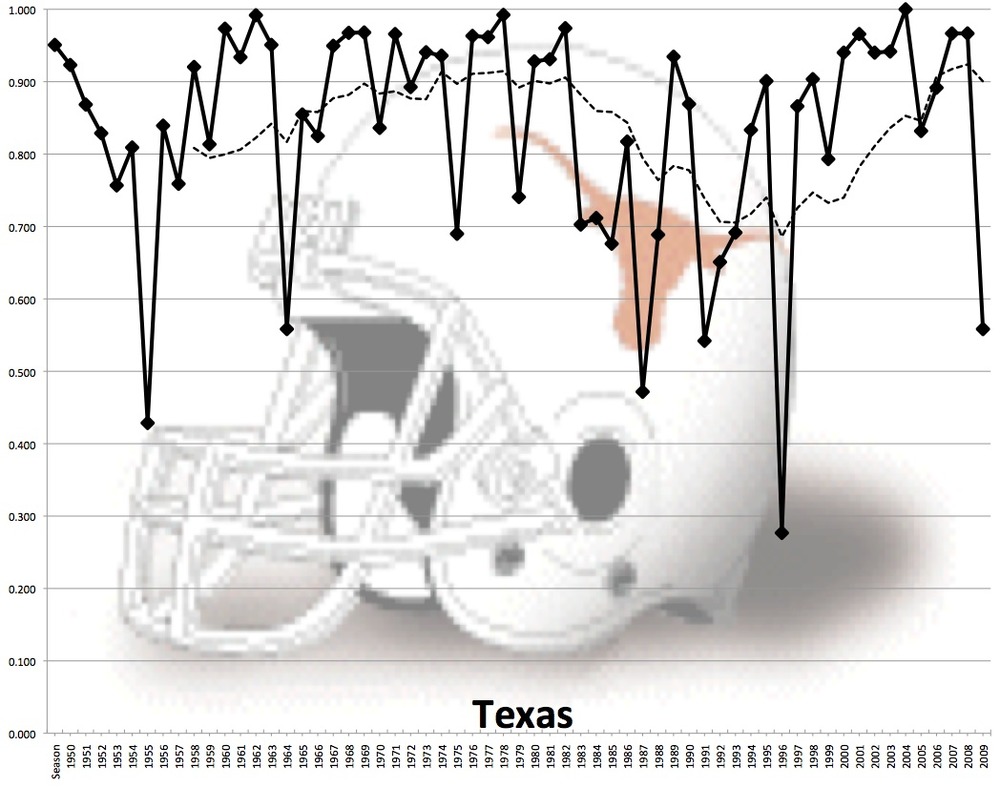 Mack Brown has won as many national titles as Bob Stoops, but he has not produced as consistent a program. Even before 2010, the Longhorns' steps backwards were much more dramatic than the Sooners'. Again, though, scoreboard: Brown 1, Stoops 1. 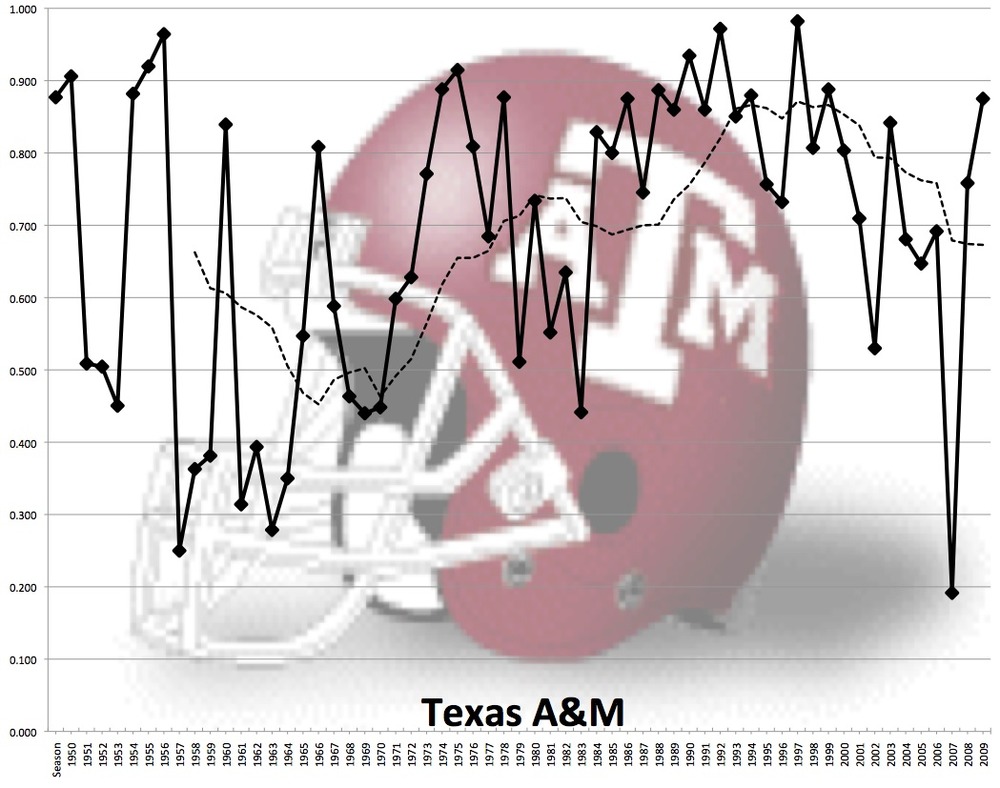 A&M was a consistently elite program in the 1990s, but this has not been a memorable decade. Luckily for them, that evidently won't stop them from SEC acceptance. 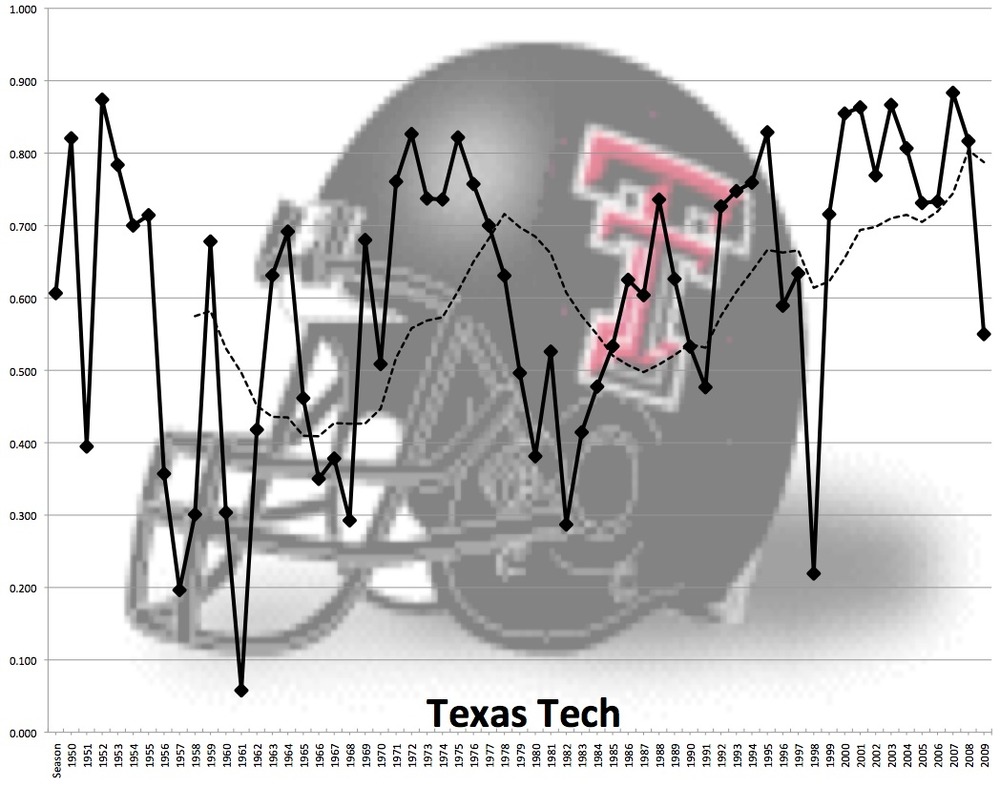 Tech continued their bowl streak in 2010, but the quality of the product was their worst since before the Mike Leach era began. (This chart, by the way, should make you appreciate the Leach era quite a bit. Then again, if you're reading this, you're probably already a Leach fan.)