In most coaching jobs, especially in reclamation projects, the first year is a one giant mulligan. You're just getting the lay of the land, and you're trying to figure out what you have. In the second year, you actually start building what you want. All of this goes double when seemingly half of your decent players get hurt.

San Jose State head coach Mike MacIntyre's first year in the land of silicone chips and organic food definitely fell into the "goes double" category. Due to injuries, iffy talent and more injuries, the Spartans were incredibly, ridiculously young in 2010. The best receiver was a redshirt freshman, two starting offensive linemen were true freshmen (another part-time starter was a redshirt freshman), the No. 2 defensive end was a freshman, the No. 3 defensive tackle was a redshirt freshman, and the top outside linebacker (a second-team all-conference performer), top middle linebacker and top strong safety were all true freshmen. That's ridiculous. But hey, if you're going with a youth movement in your first year on the job, go with a youth movement.

That a few of the newbies actually performed at a rather high level says good things about the future, as does the fact that SJSU actually improved its overall performance (even though the win total did not follow suit). And that they actually get some of their injured players back in 2011? All the better. I'm not going to try to convince anybody that San Jose State's ceiling is tremendously high, but with a squad that will still be rather young for a year or two, we should at least find out what their ceiling is.

So let's review. Two-year starting guard Fred Koloto was lost for the season, as was starting center Robbie Reed. Star safety Duke Ihenacho played two games. Starting middle linebacker Pompey Festejo played none. All of the above were replaced by first-year players. That the team was generally awful over the first half of the season, under a new coach, was no surprise. The offense improved rather significantly over the second half of the year, and four of the Spartans' last five losses came by a touchdown or less (they were 1-5 in such games overall).

As has been mentioned before here, a late-season surge that spans a game or two does not tell us what we tend to think it will about the next season. But sustained growth does. After mid-October, San Jose State was a much better team. Not a good one, but a better one. 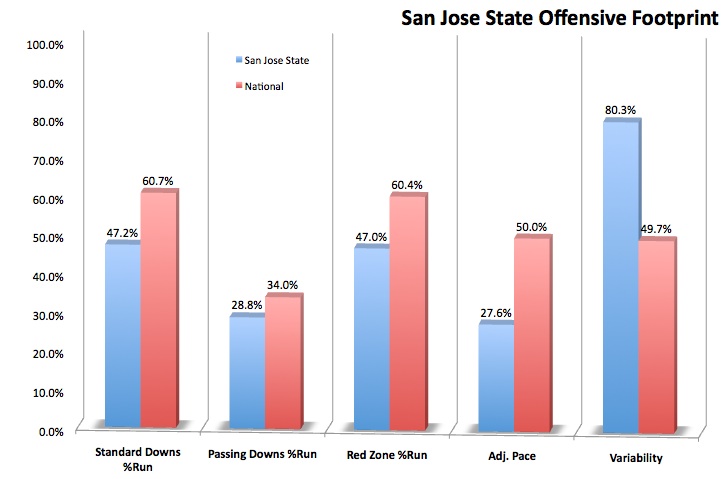 They may not have been a very good offense, but San Jose State knew what they wanted to do under offensive coordinator Tim "Not This Guy" Landis in 2010: pass first, then pass second. With Landis taking the head coaching job at Rensselaer Polytechnic Institute (Go Fight Win, Engineers!), John DeFilippo slides over to take the coordinator headset, and with his background as a quarterbacks coach -- he's held that job for everyone from Fordham to Columbia U. to the New York Jets -- odds are decent that the Spartans will heap quite a bit of responsibility on the quarterback once again.

Of course, if San Jose State actually can run the ball in 2011, they might not mind doing so. Last year, it just wasn't an option. The Spartans had one of the 12 worst running games in the country, though the turnover on the offensive line certainly didn't help matters. With Koloto and Reed out for the year, freshmen Moa Ngatuvai (guard), Nicholas Kaspar (guard) and Reuben Hasani (center) combined for 25 starts; that is not a recipe for success. Now, all three sophomores return, as do Koloto, Reed, tackle David Quessenberry and tackle Andres Vargas. Seven players with starting experience, 91 career starts, and almost guaranteed improvement up front.

For whom will this supposedly improved line be blocking? Some iffy running backs, for starters. Brandon Rutley (461 yards, 3.6 per carry, -9.9 Adj. POE, 4 TD; 183 receiving yards, 1 TD) was SJSU's leading rusher, but he brought little to the table. Backup David Freeman (163 yards, 4.2 per carry, +0.3 Adj. POE, 1 TD) actually showed a hair more potential in limited opportunities, and 225-pound converted linebacker Kyler O'Neal could be an option when and if he returns from a broken ankle. None of these players are guaranteed to thrive, but the line alone suggests the run game will involve a smidge more quality. 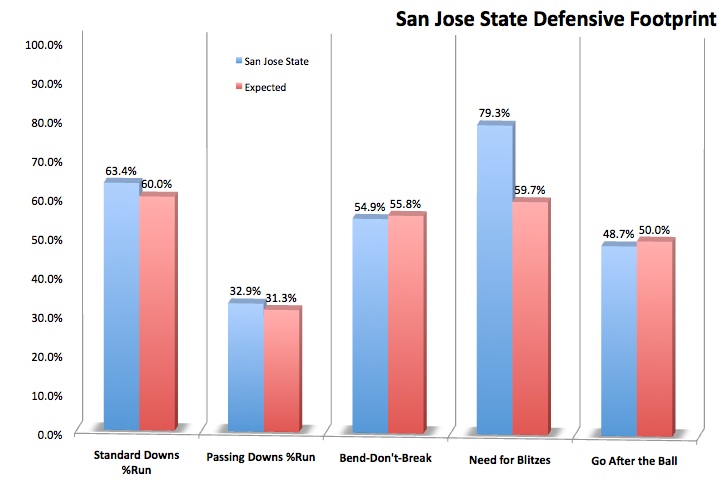 Looking at individual pieces, you'll find quite a bit to like about the San Jose State defense. The Spartans have all-conference candidates at end, outside linebacker, middle linebacker, cornerback and safety (candidates, mind you, not shoo-ins), and they must replace almost nothing from last year's unit. The entire two-deep on the line, all three starting linebackers (and a strong 2009 starter) and the top six defensive backs (and a strong 2009 starter) all return. MacIntyre, former Duke defensive coordinator and NFL DBs coach, has quite a bit to work with here.

It appears this was a defense that wanted to attack in 2010, especially with incredible freshman Keith Smith (87.0 tackles, 14.0 TFL/sacks) flying off of the edge. The problem was, in order to avoid big plays, cornerbacks offered large cushions to receivers and gave opponents easy pitch-and-catch opportunities if Smith and a pair of solid ends -- Travis Johnson (45.0 tackles, 9.5 TFL/sacks) and Vincent Abbott (30.5 tackles, 7.0 TFL/sacks, 2 PBU) -- couldn't get to the quarterback. (It also appears they were quite susceptible to draw plays.)

Experience is a good thing in a lot of ways, but it is difficult to assume epic improvement when you're dealing with exactly the same personnel. That said, SJSU really did tamp down big plays reasonably well (those large cushions served a purpose), and with the installation of two of 2009's best players -- safety Duke Ihenacho (68.0 tackles, 2.5 TFL/sacks, 1 INT, 6 PBU, 2 FF in 2009) and linebacker Pompey Festejo (60.0 tackles, 8.0 TFL/sacks, 2 PBU in 2009) -- one has to like the potential.

How about a little "Someday Baby" by Bob Dylan ... or Big Joe Williams ... or North Mississippi Allstars...

That 2008 squad ranked seventh overall in Def. Passing S&P+, 11th on passing downs. Unfortunately, the SJSU offense ranked 119th out of 120 teams, and it took a 3-0 record in one-possession games just for them to get to 6-6. 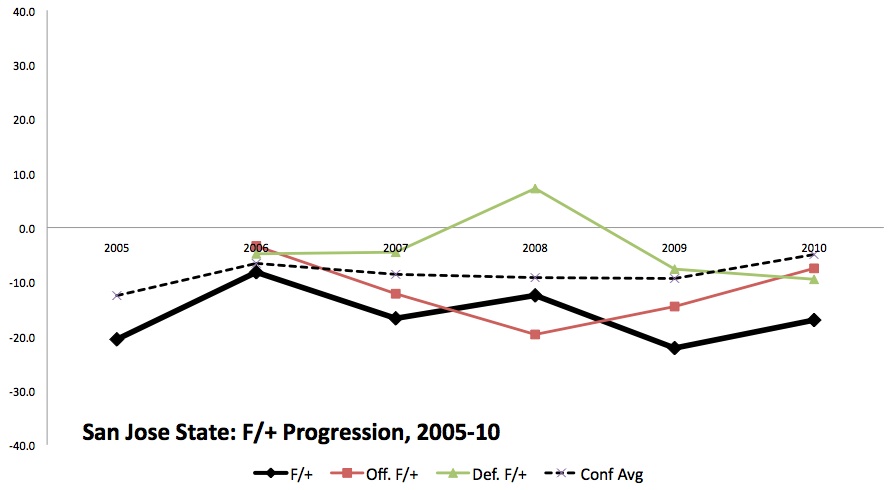 I used the words "depth" and "potential" and "options" a lot with San Jose State, and that's odd considering, well, how poor a team the Spartans have been in recent years. I talk up the corners for a defense that ranked 83rd in Passing S&P+. I talk up the receivers on a passing offense that ranked 88th. I talk about the upside of a front seven on a defense that ranked 104th in Rushing S&P+. But you have to admit ... it's a bit logical. There is some individual upside here. Keith Smith is a potentially amazing outside linebacker. There is an incredible amount of depth for a mid-major defense. There are some really interesting young weapons on offense. This is a really interesting coaching staff.

I always say that injuries ding you in the present tense but benefit the future tense. Now we get to find out if I'm right. Of course, it will probably be difficult to gauge progress in terms of wins and losses again. SJSU faces road trips to Stanford, UCLA, BYU and Fresno State this fall, meaning they will have to win six of eight even remotely winnable games to make a bowl. That probably isn't realistic, though a jump to 3-4 wins will be nice, tangible progress for a team that is putting together some decent pieces. With the teams remaining in the WAC, there is an opportunity to seize some power. San Jose State will still be a young team well into 2012, and they may have something to say about becoming a bigger fish in a smaller pond.