UPDATE: Fear, Invisibility And The Florida Gators is now up at the mothership. This is the final profile for the mothership. Three more mid-majors coming at Study Hall this weekend: San Jose State, San Diego State and Hawaii.

Though Florida is still the betting favorite in terms of Bodog.com odds (they are 9/5, while South Carolina is 19/10 and Georgia 2/1), it seems most analysts tend to be under the assumption that this year's SEC East race is really between South Carolina and Georgia. And for scheduling reasons alone, that may indeed be the case -- while Florida is the highest-ranked East team according to the Football Outsiders Almanac 2011 projections (they are 12th, South Carolina 13th and Georgia is 21st), they are projected to go just 4-4 in conference. To be sure, trips to LSU, Auburn and South Carolina could limit the Gators' growth in Will Muschamp's first season succeeding Urban Meyer. And to be sure, Florida was disturbingly aimless and feckless for good portions of 2010. But now is a good time to remind you that...

...the Gators rank first in terms of four-year F/+ performance.

...Will Muschamp is a tremendously successful defensive coach, and the Gator defense is absolutely littered with former five-star recruits.

...Charlie Weis is a tremendously successful offensive coach, and the Gator offense is also littered with former blue-chippers.

...Florida has the best home-field advantage in the conference.

Granted, none of this helped the Gators last year, but a lot has changed since 2010, no?

In the end, it isn't hard to understand why writers like Stewart Mandel are assuming 2011 will be a rebuilding-and-retooling year in Gainesville. Hell, the Outsiders projections are predicting the same thing. But you don't get many chances to talk Florida up as a potential "sleeper," and if you don't, there is a decent chance you will be feeling pretty silly around the time the Gators upset Alabama in The Swamp and moves into the Top Five in early-October.

I enjoyed throwing together last week's TCU tidbit on the historical trends of the SWC's Forgotten Four, so I figured I could go out with a bang on this, the Nerd Tidbit for today's final major conference SBN profile. (Three more west coast teams through the weekend, and we've officially covered all 120 teams!)

Below is a six-decade look at each of the SEC's 12 teams using the same percentile performance concept that I used for TCU (i.e. Est. S&P+ and S&P+). Because why not? We start with today's team, really one of the most recent (i.e. within the last two decades) additions to college football's ruling class. 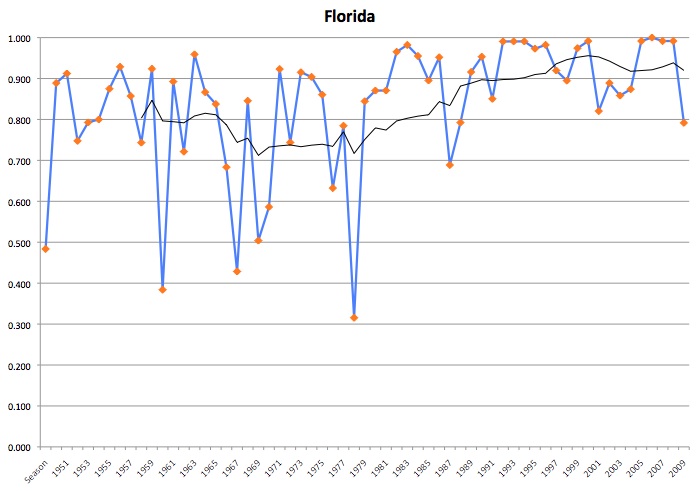 Throughout the 1950s, 1960s and 1970s, Florida occasionally had good to excellent teams -- they finished in the Top 20 five times in the 1950s and scattered some nine-win seasons throughout the 1960s and 1970s -- but they didn't flirt with true ruling class membership until the 1980s, when Kerwin Bell, Ricky Nattiel and company paved the way for Emmitt Smith, (a brief, probation-based step backwards), and the Steve Spurrier era.

(Pop quiz: can you spot the Ron Zook era?) 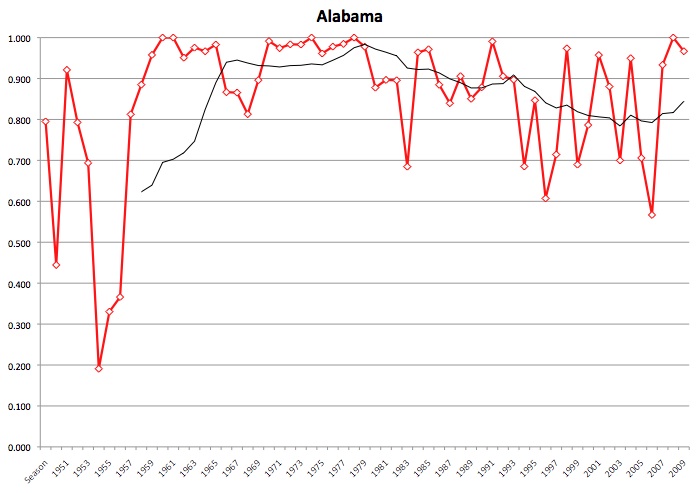 (Also: 2008-10 was Alabama's first sustained great -- i.e. .900 percentile or better -- three-season stretch since the late-1970s. Every leap forward was partnered with a step backwards.)

Other SEC teams after the jump. 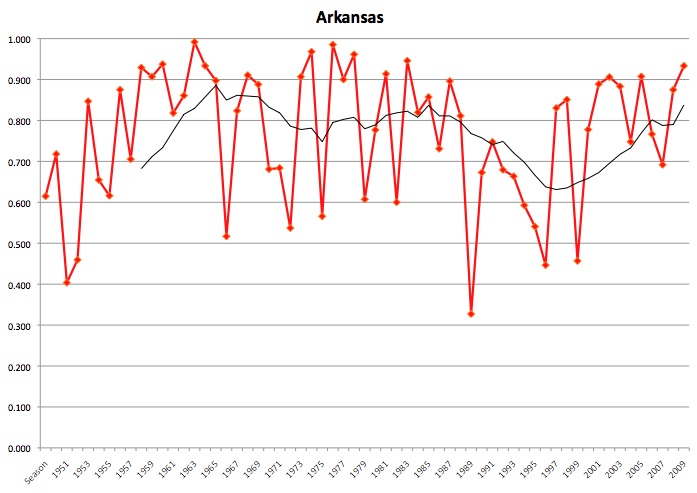 Texas A&M fans should note that it took Arkansas quite a while to find their footing in the SEC in the 1990s. 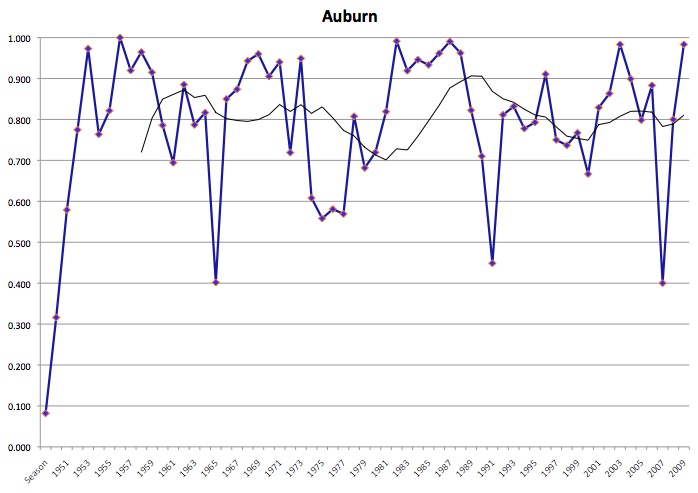 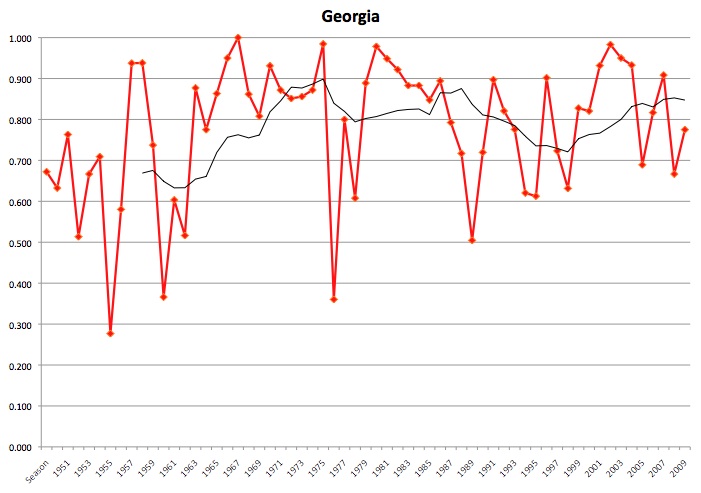 The Mark Richt era has been lovely, but the last five seasons have produced only one elite team... 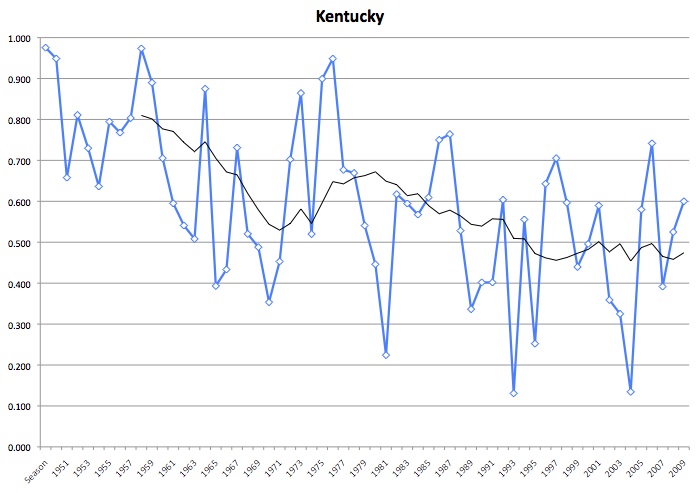 All downhill since Bear Bryant left... 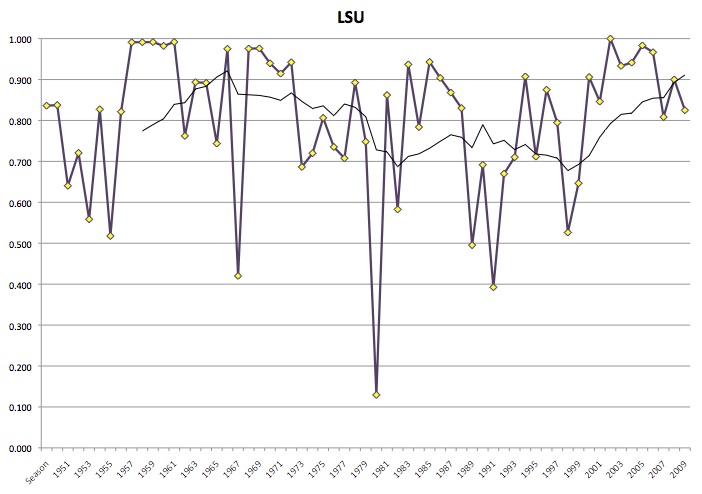 It was a strange few decades for the Bayou Bengals before Nick Saban came along. 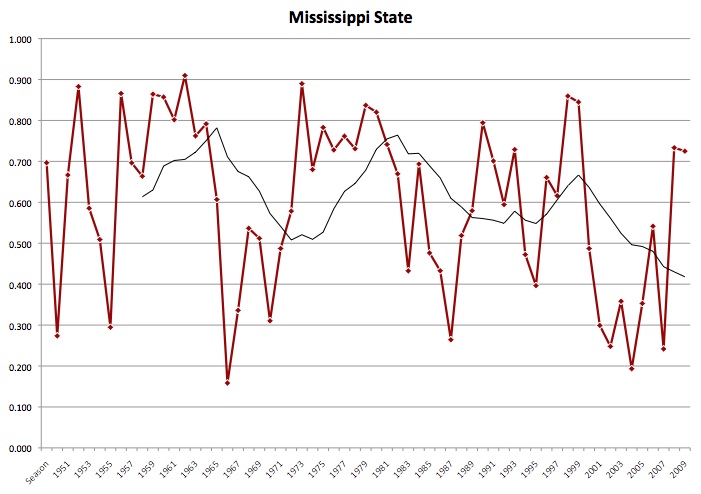 Remember that year or so when Jackie Sherrill seemingly had MSU poised to become the dominant program in the SEC West? I'm not imagining that, am I? 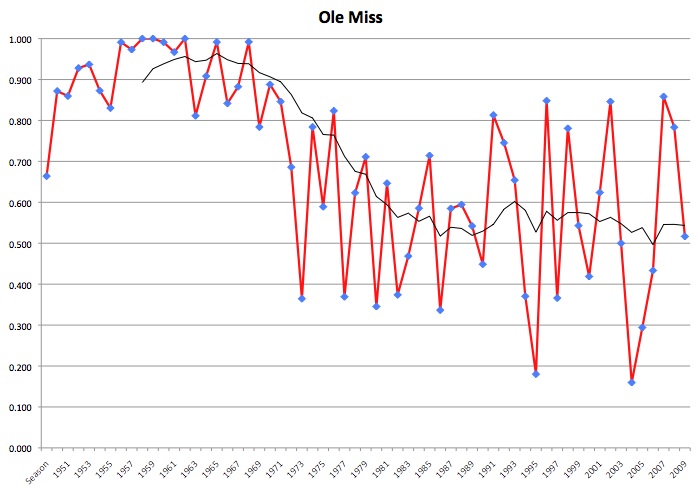 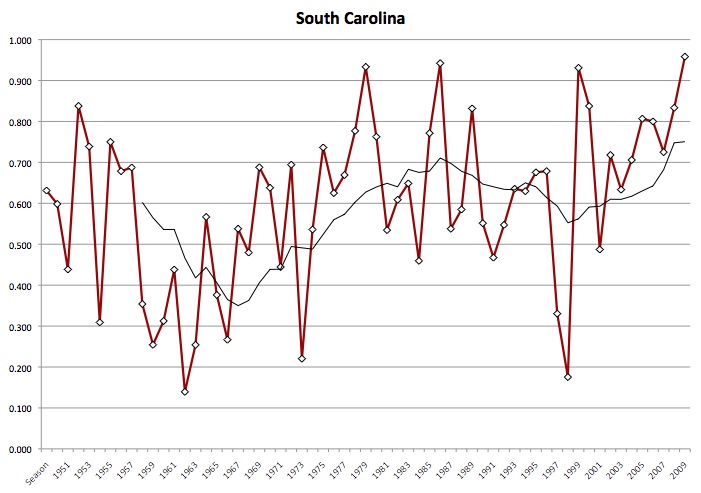 Last year's squad may have been the best to wear South Carolina uniforms in the last 60 years. 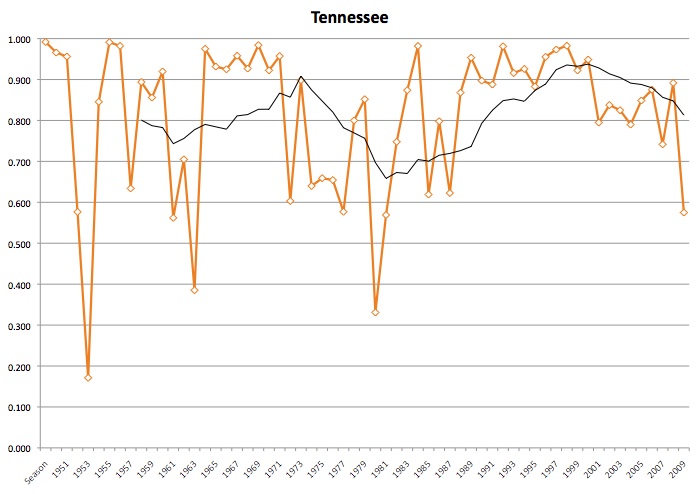 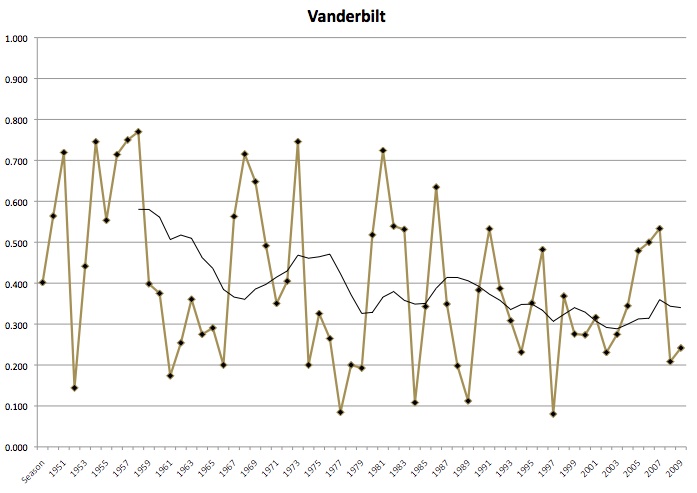