2011 Season Preview: The Fresno State Bulldogs And The Art Of Playing Hard To Get

Share All sharing options for: 2011 Season Preview: The Fresno State Bulldogs And The Art Of Playing Hard To Get

There was a moment in time when Fresno State was Boise State. With a rugged-looking "football coach" of a football coach who was willing to play anybody anywhere, and with a golden-boy quarterback, the Bulldogs took out an elite Colorado team, whipped Oregon State and Wisconsin and reached eighth in the country before suffering an upset loss to, who else, Boise State. That team still finished 11-3 overall and served notice that Pat Hill was a coach to watch, David Carr was a potentially elite quarterback, and Fresno State was going to be a thorn in the side of west coast football for a while.

That was 10 years ago. Since then, Hill's Bulldogs have been consistently … almost good. They have finished with a winning record in 11 of the last 12 seasons, won at least eight games in nine of 12, and won at least nine in five of 12. This is a solid mid-major program. But they have found ways to tease fans, consistently hinting at serious athletic potential before settling into their 8-5 groove and watching conference mate Boise State play in BCS bowls. They have mastered the art of playing hard to get.

Perhaps a bit alarming, however, is the fact that they have neither improved nor regressed over the last three seasons, barely playing above the level of an average WAC team. Momentum has been hard to come by for FSU, and while opportunity is briefly presenting itself -- they have a year off from Boise State before joining them in the Mountain West next year -- this team has to replace a majority of its best playmakers. Hill's program is not fading, but it's not improving either, and beginning in 2012, the competition gets a little stiffer.

For most of the first half of Fresno State's season, the offense and defense had a perfectly inverse relationship. The better the offense played, the worse the defense played, and vice versa. Overall, the struggles outweighed the positives, but an easy schedule allowed the Bulldogs to jump out to a 6-2 start. They'd have beaten an average opponent only once in that span (their performance against Cincy was quite solid). Then, as the schedule improved, so did the Bulldogs' defense. At least until the bowl game. 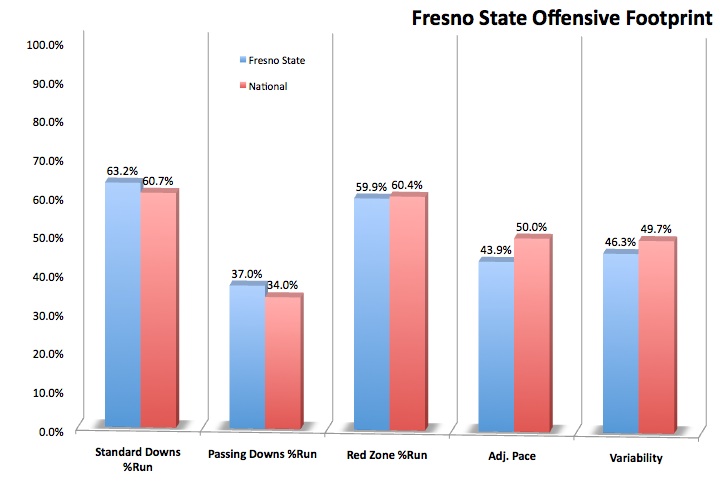 Numbers and eyeballs sometimes disagree. Last year, Fresno State's line produced two all-conference performers (center Joe Bernardi, tackle Kenny Wiggins), a second-team all-conference tackle (Bryce Harris) and a seventh-round draft pick (guard Andrew Jackson). But using advanced stats as a guide, the Bulldogs had the 13th-worst line in college football. They were not particularly proficient at opening holes for a good running back -- little Robbie Rouse (1,129 yards, 5.5 per carry, +15.3 Adj. POE, 8 TD) -- and they constantly got quarterback Ryan Colburn lit up, to the tune of 36 sacks and a No. 112 ranking in Adj. Sack Rate.

If the stats are right, then the losses of Wiggins, Bernardi, Jackson (injured most of 2010) and guard Devan Cunningham won't matter nearly as much as it seems at first blush. The larger losses came when Colburn (2,817 yards, 7.8 per pass, 63% completion rate, 23 TD, 9 INT; 301 pre-sack rushing yards, +1.0 Adj. POE) and star receiver Jamel Hamler (812 yards, 15.0 per cach, 69% catch rate, 6 TD) ran out of eligibility. To rank 52nd in Passing S&P+ despite putrid sack numbers says the actual throwing-and-catching part of the passing game was quite strong, and the two best components are gone. They are probably not irreplaceable, but they were strong.

Of course, the passing game may not matter as much if the run-first Bulldogs can actually run the ball. Rouse ranked 22nd in the country in Adj. POE because he generated solid numbers despite a lack of blocking, but backup A.J. Ellis (281 yards, 3.7 per carry, -2.9 Adj. POE, 3 TD in eight games) produced poor numbers, and again, the line really did not do their job very well. Former blue-chip running back and UCLA Bruin Milton Knox enters the fray this year; he brings a tough running style to the table, which could be a nice complement to the shifty Rouse. 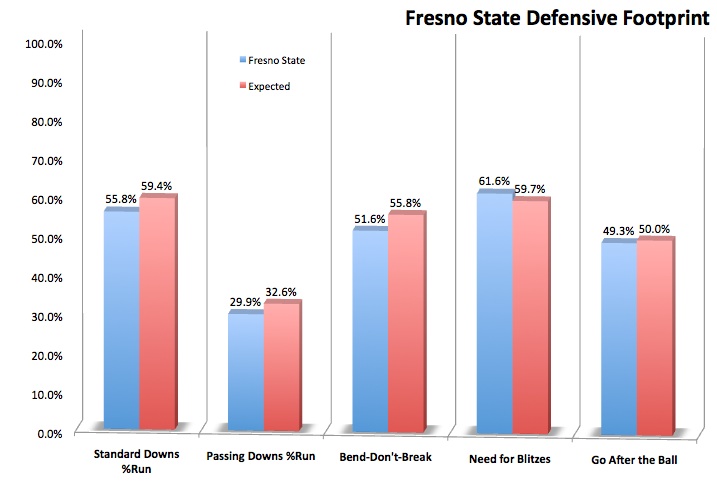 Last year's Fresno State offense was fast but injury-prone. The defense was potentially even faster but prone to awesome glitches. The Bulldogs had one of the most efficient mid-major defenses in the country, but when they suffered a breakdown, it was an enormous one. They were relatively young, and experience may tamp down some of the big plays, but a couple of the players they must replace were outstanding and explosive.

Stats and eyeballs may disagree from time to time, but opinions on now-departed defensive end Chris Carter (43.5 tackles, 16.5 TFL/sacks, 4 FF) were unanimous: he was a stud. The WAC Defensive Player of the year, Carter was among the nation's Top 25 in tackles for loss and the Top 10 in forced fumbles. He and all-conference tackle Logan Harrell (34.0 tackles, 14.0 TFL/sacks, 3 PBU) made for one of the most ferocious 1-2 combinations in the country. Along with outside linebacker Travis Brown (56.5 tackles, 9.0 TFL/sacks, 1 INT, 2 PBU), they gave Fresno State a top ten pass rush. Now it's just Harrell (and Brown), hoping that replacements like Donahvaughn Pritchett (10.0 tackles, 4.5 TFL/sacks), Nat Harrison (8.0 tackles, 1.0 TFL/sacks) and other little-used ends can somehow replicate Carter's magic. It's hard to get your hopes up too much on that one.

The depth Fresno State lacks at end, they may make up for at tackle. Harrell is complemented by Chase McEntee (10.5 tackles, 4.0 TFL/sacks), Anthony Williams (12.5 tackles, 3.0 TFL/sacks) and Nikko Motta (8.0 tackles, 2.5 TFL/sacks in seven games). Granted, Harrell and I would make for a solid pair of defensive tackles; Harrell and these other players give the Bulldogs one of the deeper mid-major units in the country. 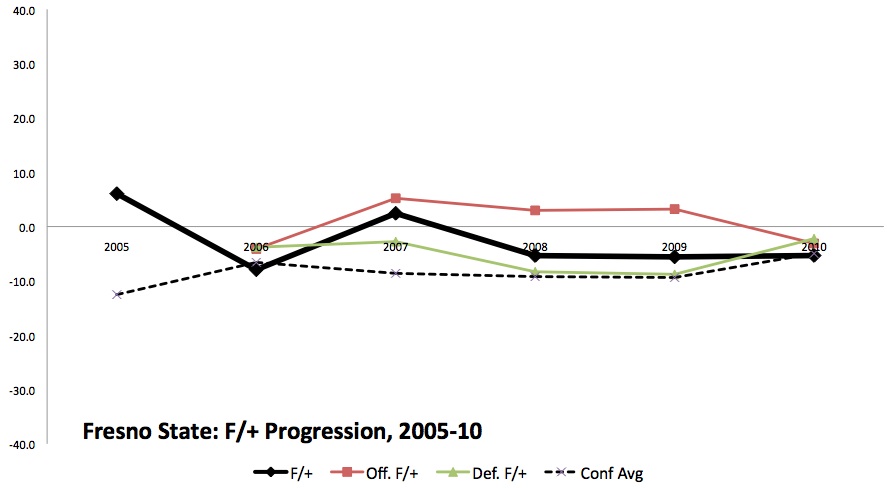 Pat Hill has figured out how to always field one of the faster, more athletic mid-major teams in the country. It is the breakdowns that consistently make them a tease instead of a force. If the offense stays healthy, and a more experienced defense can limit breakdowns, then the loss of playmakers like Chris Carter and Jamel Hamler can be overcome. Tackle Logan Harrell is incredible, there's a Carr at quarterback, and the skill position roster is deep. But a decade of evidence suggests that minimizing breakdowns is far from guaranteed.

As always, the schedule is interesting. Boise State and Ole Miss come to Fresno, while seven road games -- including trips to California, Nebraska, Nevada, Hawaii and San Diego State -- await Fresno State in 2011. The most important trip is an October 22 jaunt to Reno that may decide the WAC title. The Bulldogs will be as athletic as most of the teams on their schedule, but the Bulldogs could struggle to overcome both recent history, home field advantages and Nevada in the WAC race. While the Football Outsiders Almanac 2011 gives Nevada a 90% chance of finishing 6-1 or better in conference, Fresno State is only given a 16% chance. Another bowl trip is semi-likely (they are given a 41% chance of finishing 7-6 or better), but the Bulldogs will have to prove they are no longer just a tease before the numbers -- and the eyeballs -- believe them.

Be sure to purchase your Football Outsiders Almanac 2011 today! Download your copy now; paper copies are due later this week .