UPDATE: Saturday's America And The TCU Horned Frogs is now up at the mothership. Yes, I do more gushing about Dan Jenkins' college football writing. No, I am not ashamed.

The best writing makes you feel what the writer feels; Dan Jenkins is a TCU fan, therefore I feel like a TCU fan. And the fans in purple and white have witnessed, in slow motion, one of college football's great redemption tales. A powerhouse under Francis Schmidt and Dutch Meyer in the 1930s and a resurgent program in the 1950s, the Horned Frogs fell to a desolate place, winning just 15 games in a ten-year span in the 1970s and early-1980s. If they were cheating like the rest of the Southwest Conference in that time, they were doing a terrible job of it. They experienced just one eight-win season in the final 36 years of the SWC, and they were removed from the major conference ranks, but under first Dennis Franchione (remember when he was the hottest name in coaching?), then Gary Patterson, TCU has won 10 or more games in eight of the last 11 seasons. They were the last team not named Oklahoma to win a game at Owen Field in Norman. They are expanding and renovating their tired stadium. They are regaining their major conference perch in 2012. They are officially a major college football program again.

In this time of major transition in terms of perception and stature, 2011 will be one of transition on the field for the Horned Frogs. Patterson has proven himself to be nothing if not one of the best coaches in college football, and chances are the transition will go as smoothly as possible. But a few new names and faces will attempt to maintain TCU's current level, which, if you believe advanced stats at all, is that of a Top Five program.

Before four Big 12 teams -- Iowa State, Kansas, Kansas State and Missouri -- were (allegedly) almost left in the cold and deemed "The Forgotten Four" during last summer's conference realignment drama ... there was the real Forgotten Four. When the crumbling Southwest Conference and the Big 8 joined forces in the mid-1990s, four SWC programs were kicked to the curb and left to fend for themselves in the world of the mid-majors. Baylor alum and then-governor of Texas Ann Richards famously got Baylor included in the new Big 12, leaving Houston, TCU, Rice and SMU's smoking crater out of the loop.

I thought it would be interesting to look at long-term trends regarding these teams and see how each program has responded to mid-major life. Below are some charts looking at each team's percentile performance (according to Est. S&P+ and, beginning in 2005, S&P+). You'll see a small trend line for each, which represents each team's 10-year average.

We begin with the big dogs. 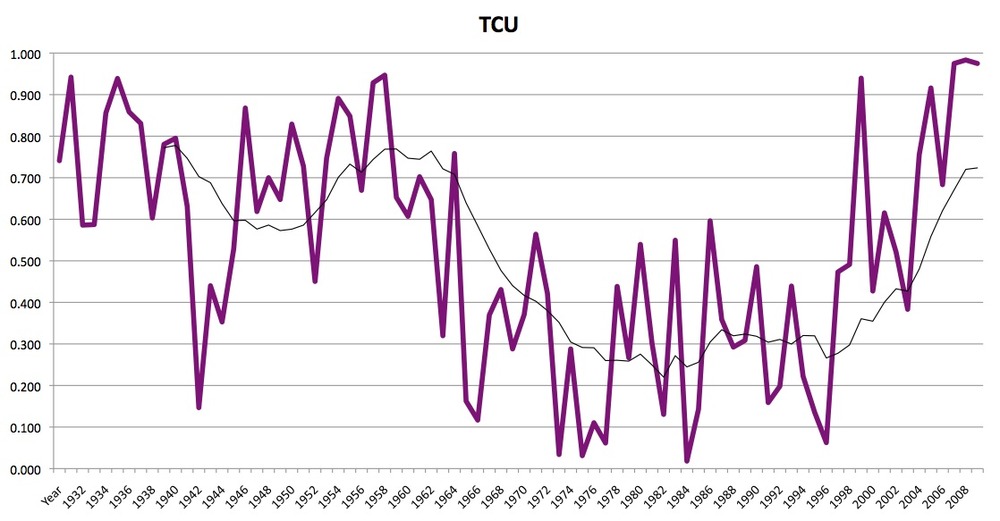 TCU was elite in the 1930s and 1950s, then completely fell apart. As I mention in today's TCU profile, if they were cheating like the rest of the conference in the 1970s and 1980s (allegedly, ahem), they were doing an awful job of it. The crater lasted well into the 1990s and basically disqualified them from Big 12 inclusion. It's easy to look back and scoff at Richards' influence on the process of creating the Big 12, but ... Baylor had been the better program in the late-1980s and early-1990s. It didn't seem quite as odd then as it would when TCU surged and Baylor performed horribly.

Regardless, TCU has built itself back into an elite program and will once again enjoy major conference membership beginning next year. If that isn't a redemption tale, I don't know what is. 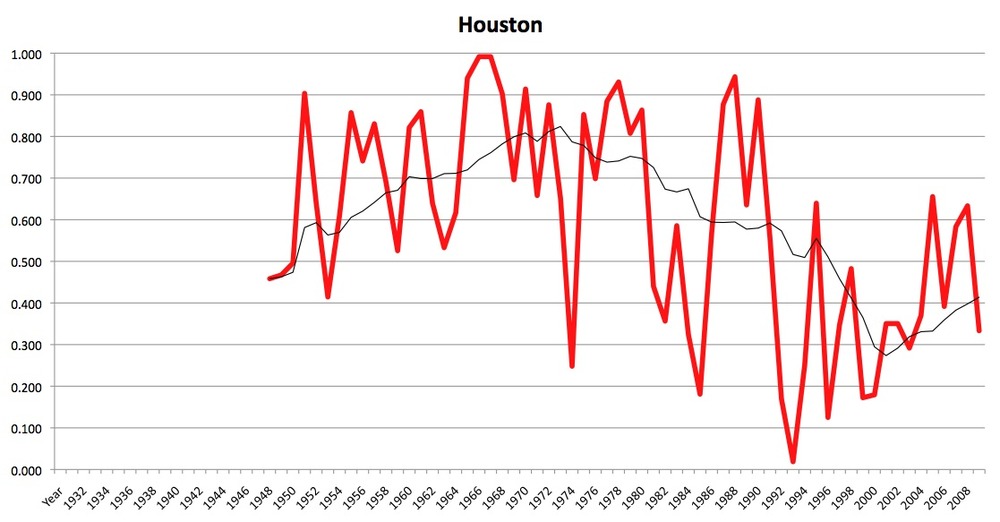 Houston was actually the strongest of these four programs in the Andre Ware era and into the early-1990s. But the commuter school allegedly has only marginal fan support and clearly didn't have enough influence in the Texas legislature. The Cougars have gone through quite a few ups and downs since losing their major conference meal ticket, but they are trending upward again thanks to the work of Art Briles (now the Baylor coach) and Kevin Sumlin. 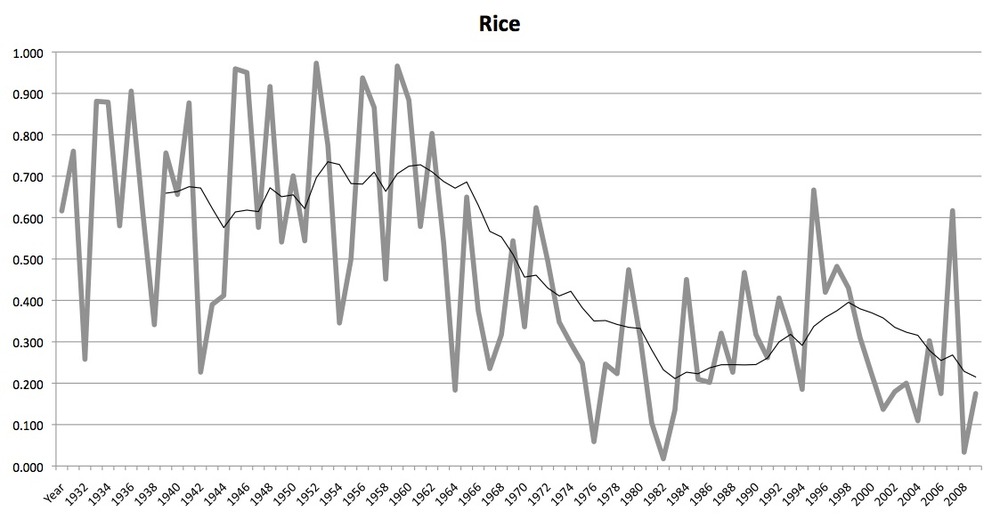 Like TCU, if Rice was cheating in the 1970s and 1980s, they were doing a poor job of it. Mid-major membership has not changed their trajectory much, as their trajectory was that of a mid-major to begin with. 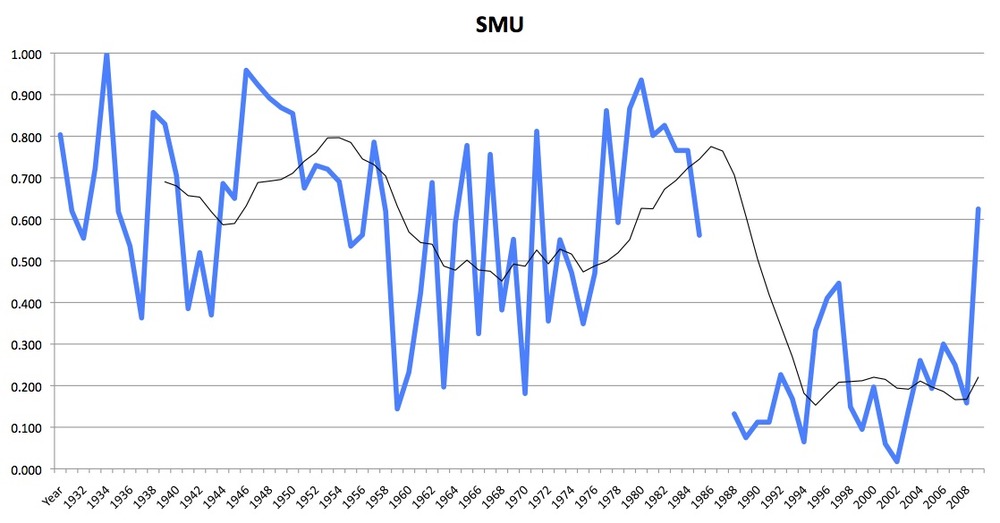 Ah, SMU. Now there's a program that knew how to cheat. For the most part, the Mustangs played at a level higher than that of TCU and Rice in the 1960s (they were, after all, coached by Hayden Fry), but they surged thanks to Ron Meyer's, um, recruiting, and they coasted along at a high level until given the death penalty for their well-documented actions. But we already knew all of this.