Lost amid all the conference realignment talk these past few days was an interesting (and, of course, potentially false) admission from Virginia Tech athletic director Jim Weaver that the Hokies would probably "politely decline" an offer of membership from the SEC. It was a nice reminder that bigger is not always better in college football, and that the most lucrative possible option on the table is not always the long-term winner. (It also could have been Weaver simply covering his, and Virginia Tech's backside, but still.)

This statement reminded me of last fall, when Montana turned down an invitation to the Western Athletic Conference. At first, a jump to FBS and pre-arranged conference membership seems like a no-brainer; but in looking at the long-term consequences of a jump, Montana officials decided that remaining an FCS power made more sense. A few months earlier, their head football coach had different ideas.

After seven incredibly successful seasons at Montana, Bobby Hauck agreed to become the new head coach of the UNLV Rebels. It was a coup of sorts for UNLV; Hauck won 80 games (11.4 per season), went 47-6 in the Big Sky (the SEC of the FCS), advanced to the FCS playoff all seven years, and made the title game three times. Winning at the FCS level obviously does not prove that you can win at the FBS level, but Hauck had certainly proven all he could in Missoula, so he left.

(There are potentially other factors involved in his departure, factors that do not in any way make Hauck look good, but without knowing the entire story, I will, for now, just point it out now and ignore it for the rest of this profile.)

Hauck is now the head coach of an FBS program, which is quite an accomplishment. But was this a smart move? Will Hauck be able to do anything that the last six guys haven't been able to do: win consistently? Since Harvey Hyde took the UNLV job in 1982, the Rebels have finished with a winning season just six times; they've done the deed just once since their move to the 16-team WAC (and, soon after, the Mountain West) in 1995. This is a tough place to win and could be a good example of a bigger job not necessarily being a better job.

Hauck's first season in Vegas was a trying one, and for very obvious reasons. UNLV was ridiculously young and semi-hopeless, but ... when you go as young as UNLV did, you probably know the hopelessness is coming. The Rebels were at least semi-decent in September and November, but an October crater defined the season.

Of course, the good news about youth is that it gets older. The Rebel defense could, in particular, improve rather significantly in the near future. 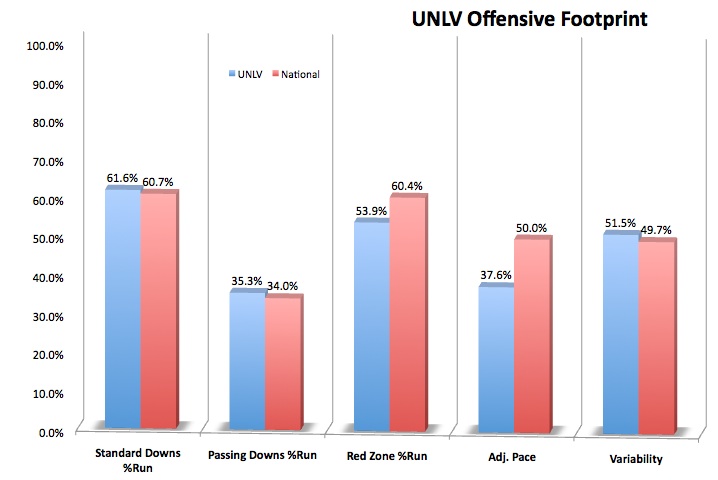 UNLV's intent on offense was clear last year: a balanced attack running at a slow, underdog-friendly pace. This can obviously be a winning strategy, as long as you are at least semi-proficient at both running and throwing the ball. With quarterback Omar Clayton (1,818 yards, 6.4 per pass, 56% completion rate, 13 TD, 9 INT) throwing to Phillip Payne (689 yards, 17.2 per catch, 56% catch rate, 5 TD) and Michael Johnson (571 yards, 11.2 per catch, 65% catch rate, 5 TD), the passing game was solid, ranking 66th overall, fifth in the Mountain West. But oh, were they awful at running the football. Running backs Channing Trotter, Tim Cornett and Deante' Purvis all averaged under four yards per carry and combined for a minus-16.3 Adj. POE.

The backs will be running behind at least a reasonably experienced line; five linemen with starting experience return, though only one (guard Jason Heath) has started a full season's worth of games. In all, they return just 36 career starts. Still, there is reason to believe the line won't regress much, and if the young runners step up their game, then the title of "biggest concern" moves to the quarterback position. Clayton is gone, and it appears the starting job will go to either junior college transfer Sean Reilly or sophomore Caleb Herring (365 yards, 6.5 per pass, 50% completion rate, 4 TD, 3 INT). Right now, it appears Herring is in the lead. 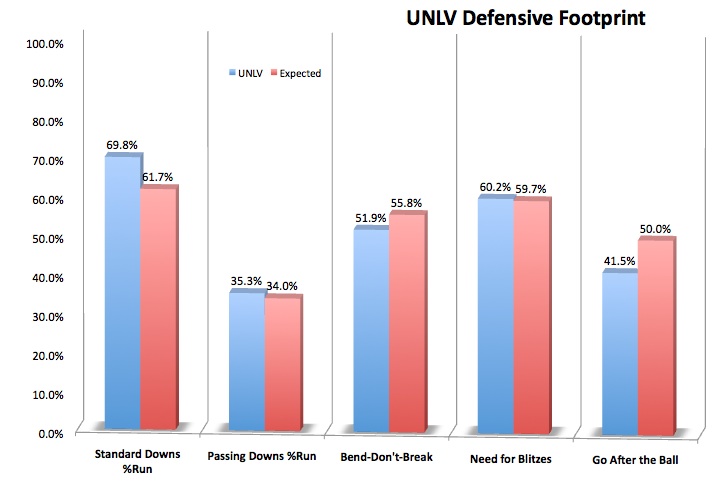 It gets difficult to figure out what to say about defenses that were poor in almost every way. UNLV's defense was the eighth-worst in the country against the run, fourth-worst against the pass. They were much better on passing downs, which suggests they want to play aggressively if they can pull it off, but as I said about Nevada yesterday, passing downs aggression is only good if you're able to force passing downs. UNLV was not.

It does appear that the pass defense might be the first to improve. Tuiloma-Vaa and Hodge are solid, cornerback Will Chandler (30.5 tackles, 2.5 TFL/sacks, 5 INT, 3 PBU, 2 FR) is a nice playmaker, and safety Mike Clausen (22.0 tackles, 1 INT, 1 FR) should be able to replicate the production of departed safety Alex De Giacomo (70.0 tackles, 4.0 TFL/sacks, 2 FR, 4 PBU). Junior college transfer Kenneth Spigner could make a fast impact as well.

Since Houck and company will look to move on quickly from their first season in Vegas, we'll highlight a very underrated song: "First... And Then," by Handsome Boy Modeling School and Dres from Black Sheep.

When you look at what UNLV returns in the secondary, it is easy to get the impression that improvement is on the way. All but one defensive back returns, including two sophomores and a high-ceiling cornerback (Chandler). You can talk yourself into that. Only ... the Rebels ranked 117th in Passing S&P+ last year with these supposedly high-ceiling players. So how far can UNLV truly expect to rise in one year? Pretty far, actually. 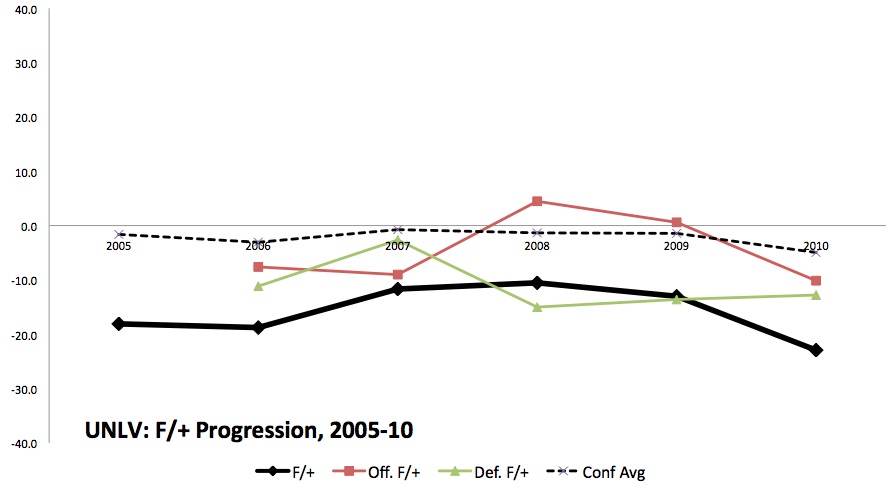 You assume a team that went 2-11 was probably at least a bit unlucky, and to be sure, UNLV's YPP margin suggests a little bit of a turnaround. But ... they lost no close games, they recovered more than 50% of their games' fumbles ... this was simply a bad team. But they were also young, and it is possible to see their running game improving a bit and their pass defense improving significantly. They won't be a good team, by any means, in 2011, but it is possible that Bobby Hauck could be building something.

Seven road games await the Rebels in 2011, including visits to otherwise beatable teams like New Mexico and Wyoming. Between that, and the fact that they face home games versus Boise State and solid Hawaii and San Diego State teams, it is likely that UNLV will improve a lot more in the advanced stats than in the loss column. With a team this young, the future might be at least reasonably bright, but it will be another couple of years before we find out if this move up was a smart one for Hauck.