The Wyoming Cowboys And The Need For Three Years

Share All sharing options for: The Wyoming Cowboys And The Need For Three Years

Bob Devaney coached there before going to Nebraska.

Fred Akers spent two years there, then moved to Austin.

Pat Dye was here a year, then headed to Auburn. For Dennis Erickson, it was a 12-month detour on the way to Washington State (where he stayed for a full two years).

Joe Tiller started to piece together some great offensive concepts there, then took them to Purdue (and the Rose Bowl).

Dana Dimel did some good things, then headed to Houston.

You win in Laramie, and then you leave Laramie. Guess that makes Wyoming the MAC school of the Mountain West then?

For a moment there, it looked like it was going to be quite easy for Dave Christensen. The former Missouri offensive coordinator took over Joe Glenn in 2009 and immediately engineered a three-win improvement and just Wyoming's second bowl win since 1966. But unfortunately, the team still wasn't very good. They won close games, got some breaks, and covered up the fact that there was still a lot of work to do under the hood. In 2010, the luck disappeared and the wins vanished. Now entering Year Three, Christensen has put some talent together both in the booth and on the field. Does he have enough to lead Wyoming to a legitimate step forward this fall?

In a way, Dave Christensen screwed himself in 2009 by succeeding so quickly despite a team with clear holes. In 2010, the Cowboys' win total fell by four games despite the fact that their overall F/+ rankings fell just four spots, from 102nd to 106th. Their offense improved by a decent amount while their defense regressed quite a bit, but for all intents and purposes, they were the same team in 2010 as in 2009.

So how did they falter? Close games, of course.

The 2010 Cowboys got blown out the same amount as the 2009 team did, but their sense of clutch timing, something about as unsustainable as Lloyd and Diane's relationship in Say Anything (sequel? SEQUEL!!), clearly failed them. The team was too young, too banged up, and too thin to successfully pull off the same high-wire act they managed in 2009. 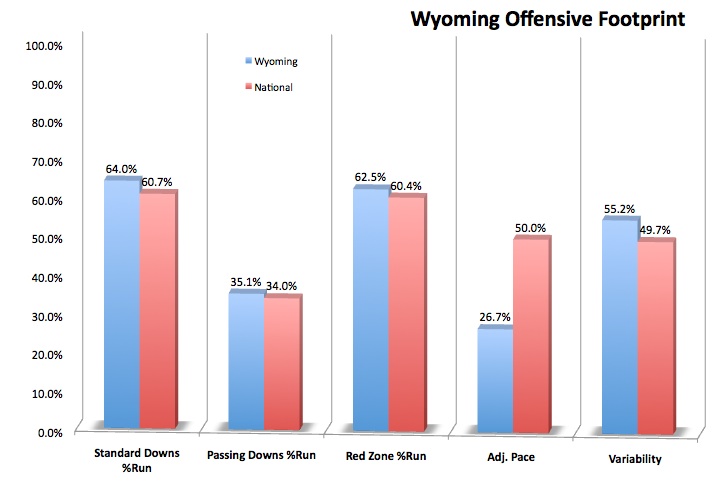 Picture those 2007-08 Missouri offenses for a moment. Robotic quarterback throwing, throwing, throwing to some big targets and some fast ones, lining up as quickly as possible, then doing it again, right? Not exactly the identity Wyoming established last fall. Dave Christensen proved both that the spread is malleable and that he is only going to attempt what he can with the personnel he has. Wyoming in 2010 was a plodding, balanced offense that did the best it could with what was one of the worst offensive lines in the country.

When you've got a poor line, one that ranks worse than 110th in both Adj. Line Yards and Adj. Sack Rate, your odds of establishing even a semi-efficient offense are nearly nil. The Cowboys showed strong big-play ability on the ground -- they should again in 2011, as Alvester Alexander (792 yards, 4.2 per carry, +22.6 Adj. POE, 14 TD; 134 receiving yards) is one of the most underrated running backs in the country -- but it truly does start up front, and Wyoming was completely outmanned in 2010.

Will that change starting in September? If not, it won't be for lack of effort. Despite four returning starters on the line, Christensen and new offensive coordinator Gregg Brandon did a lot of shuffling. Two-year starting center Nick Carlson will once again man the middle, but just about everything else has changed. Right guard John Hutchins moves to left tackle to start in front of two-year starter Clayton Kirven, and right tackle Kyle Magnuson will start ahead of last year's starter Josh Leonard. Tyler Strong, a defensive tackle good enough to see the field as a true freshman last year (he has 2.0 TFL/sacks in seven games), moves to offensive guard. Despite a total of career starts in the 70s, this will be a pretty new line. The good news, of course, is that it almost certainly won't be worse than last year's unit.

This is good news for Alexander, whose plus-22.6 Adj. POE was good for seventh in the country. Just about any back in FBS would have struggled to average four yards per carry with the blocking Alexander received, and his production could skyrocket with help. Christensen and Brandon are planning to lean heavily on the run as well, which could bump Alexander's numbers up even further.

(The tandem of Christensen and Brandon, by the way, is an interesting one; when Gary Pinkel and Christensen were looking to move to the spread in 2005, Brandon was atop the list of coaches they contacted.) 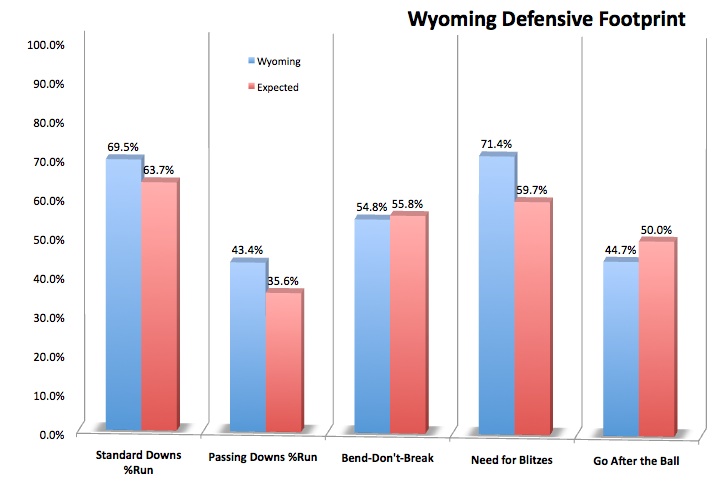 For most of the last few years, Wyoming has had a perfectly competent defense under coordinator Marty English. It was the key to the Cowboys' surprise bowl season of 2009. But turnover, a change in scheme (from a 3-4 to a 4-3) and poor depth severely damaged any chance for success in 2010. The defense did an okay job of preventing big plays, but they completely sacrificed efficiency to do so. They got after the quarterbacks on passing downs but folded against the run. (This last sentence, by the way, is exactly what you expect to see, really, when your two best defensive ends are converted linebackers.)

This bunch is joined by a few interesting recruits: high-three-star, freshman end Eddie Yarbrough, junior college end Miraldo Michel and redshirt junior tackle Kurt Taufa'asau all graded out well in Rivals' ratings, and among these ten players, stability is at least somewhat likely.

If you are one to believe the 'Pokes were lucky in 2009, and said luck evened out last year...

"Bad Luck," by Social Distortion
"Bad Luck and Trouble," by R.L. Burnside
"Good Luck, Bad Luck," by Gregory Isaacs
"I Won't Be in Hard Luck No More," by Big Joe Williams
"Love and Luck," by Jimmy Buffett
"Luck of Lucien," by A Tribe Called Quest
"Lucky," by Radiohead
"Shit Luck," by Modest Mouse
"Sister Luck" by The Black Crowes
"You Got Lucky," by Tom Petty & The Heartbreakers

Typically when teams' win totals fall by four or more, this coincides with a (predictable) plummet in F/+ ratings. But that's not always the way it works.

Typically win your win total improves without your team really improving, you don't have to wait long for your comeuppance. 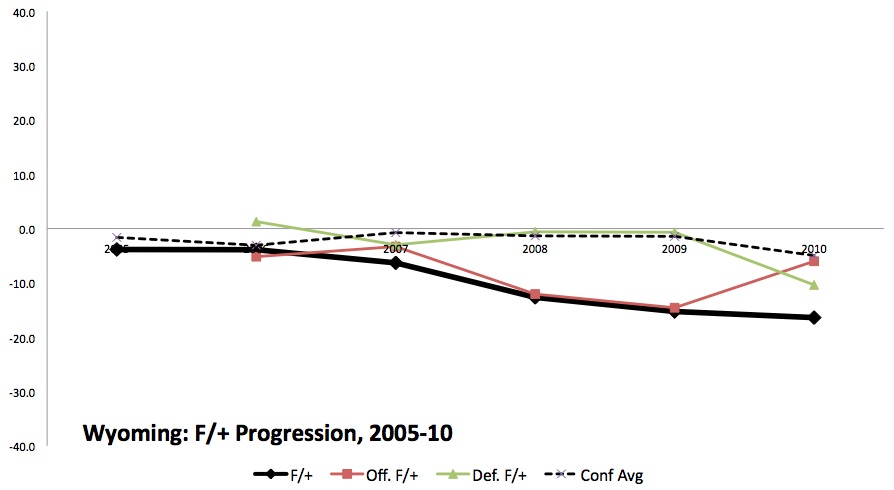 The win totals may have dramatically changed twice in two years, but in terms of the pure on-field product, little has changed in Dave Christensen's first two seasons. He has been slowly putting pieces together, attempting to install his offense and find the right personnel for a stable defense. His tenure is proof that almost every coach (almost) deserves a full three years before drawing any major conclusions.

With a semi-mentor in place as offensive coordinator, Christensen officially has one of the more interesting pairs of coordinators at the mid-major level. He's also got an excellent running back, strong defensive ends and decent receivers and linebackers. There are legitimate pieces coming together, but whether Wyoming is ready for a true step forward in 2011 depends on a reshuffled offensive line, a retooled secondary ... and, of course, and amazingly young quarterback. It feels like the Cowboys might still be a year away, especially with a schedule that includes home games versus Nebraska and TCU and trips to Air Force, Boise State and San Diego State. Hosting Weber State, Texas State, UNLV and New Mexico, Wyoming should easily get back to at least four or five wins, but a) they'll need seven to make a bowl (since they play two FCS teams) and b) they probably won't reach seven.

Christensen is slowly and methodically building his program, not unlike what his mentor Gary Pinkel did at Missouri, and it could pay off as long as fans and administrators don't get impatient with a 5-7 season in 2011.