Share All sharing options for: Steve Trachsel And The Air Force Falcons

Yes, this is an Air Force Football profile. I bring this up because … well, look at the Falcons' recent F/+ progression: 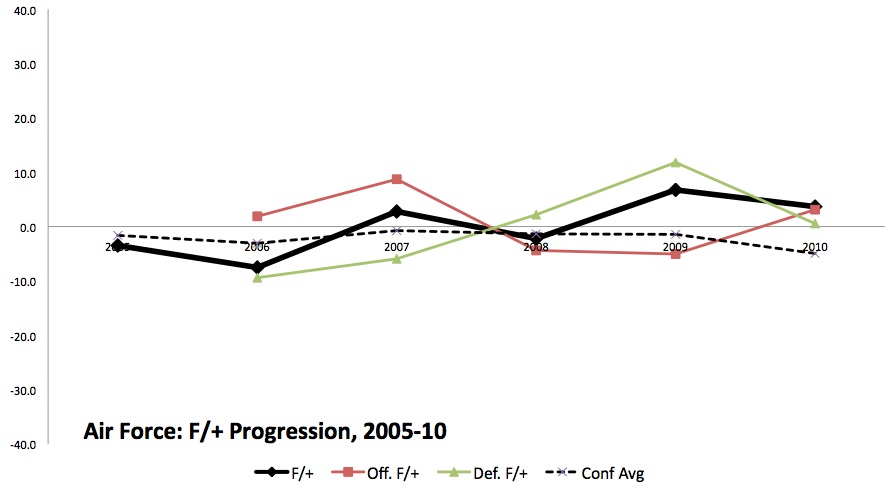 Though they don't exactly plummet in even-numbered years, they certainly surge in the odds. We aren't in full Trachsel Territory yet, but another surge in 2011 would advance us pretty far down the road.

By the time Fisher DeBerry's long, incredibly successful tenure as Air Force head coach ended in 2006, the magic had run out. The program that went 22-4 in 1997-98 and finished in the AP Top 15 three times in 25 years (include a ranking of eighth in 1985) had won just 13 games from 2004-06. It did little to dampen DeBerry's overall legacy, but it did leave Air Force in less stable shape when Troy Calhoun took over in 2007. No worries. Calhoun immediately reestablished the Falcons' bowl credentials, and in four years, he has already directed two lovely surges in terms of overall quality of play. The AFA has won 34 games, but they have quickly hit their heads on a nine-win glass ceiling. In a new Mountain West that has added Boise State but lost BYU and Utah, can the Falcons establish themselves a bit higher up in the pecking order?

Air Force was one of those teams that rarely saw its offense and defense play well at the same time. In games in which their offensive Adj. Point totals were 33 points or better, their defense 'allowed' 30.0 Adj. PPG. And when their defense 'allowed' 27 Adj. PPG or lower, the offense posted only 24.9 Adj. PPG. Only against Army did they appear to put everything together. Luckily, their offense typically produced slightly more than their defense allowed. Games against teams like Wyoming and UNLV were closer than they should have been, but they were still wins. Meanwhile, they played well enough against good teams like Oklahoma and Utah to almost pull an upset.

Despite ups and downs on both offense and defense, Air Force went 1-4 versus teams in the F/+ Top 50 (Navy was No. 43) and 8-0 versus everybody else. The flexbone is a nice equalizer, a nice underdog offense, but in the end the Falcons beat teams worse than them and lost to teams better than them. 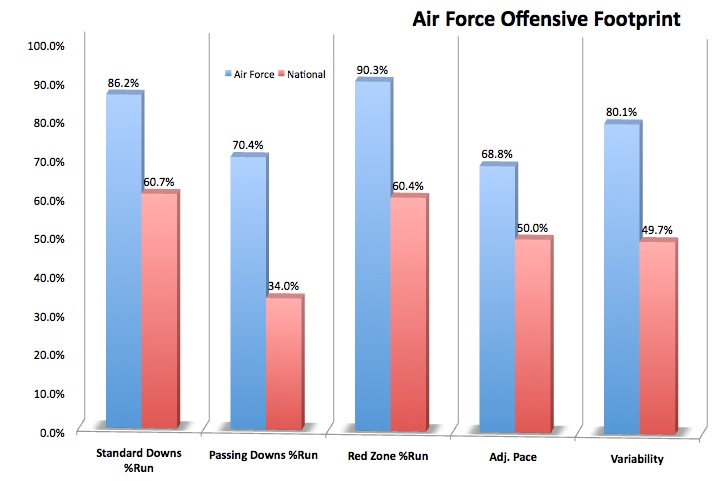 The Air Force is ... the Air Force offense, full of option, pace and flexbony goodness. They ran over 85 percent of the time on standard downs and well over two-thirds of the time on passing downs, and while they didn't run at an Oregon- or Oklahoma-level pace, they ran a lot of plays considering how much they were running the ball. Their overall variability was quite high, but that's mainly because, for all intents and purposes, they ran almost 100% of the time when they had a lead; just by passing the ball in other circumstances, their variability was skewed quite a bit. That, and they leaned on what they knew when close to either goal line.

The Falcons never exactly aired it out, but they definitely felt more in the mood to take risks more toward the middle of the field, when they were safer from disaster (either in the form of handing opponents easy points or taking points off the board). You can tell they valued points and opportunities, and when they sniffed out a chance to score, they leaned on what they knew.

With the departure of Navy's Ricky Dobbs, Air Force quarterback Tim Jefferson (1,459 passing yards, 9.2 per pass, 52% completion rate, 10 TD, 6 INT; 794 pre-sack rushing yards, +9.4 Adj. POE, 15 TD) now assumes the "Most proven Flexbone quarterback" throne. If it seems like he's been around forever, he kind of has. He won the starting job during his true freshman season in 2008, and despite some issues with academics and injuries, he's been running the show most of the time ever since. The senior from Atlanta has racked up 2,962 career passing yards and 1,435 career rushing yards. Granted, that's one season's output for Cam Newton, but in this offense, that is particularly impressive and effective.

Jefferson is joined by a semi-effective running back and a few key pieces from last year's extremely effective line. Asher Clark (1,031 yards, 5.7 per carry, -7.8 Adj. POE, 5 TD) racked up the rushing yards last year, and he certainly seems like a solid back, but he did a good majority of his damage against bad defenses -- he rushed for 625 yards (6.0 per carry) and four touchdowns against Northwestern State, Wyoming, Navy, Colorado State, Army, New Mexico and UNLV. He still averaged 5.3 per carry against better defense, but the numbers appear to give a good portion of the credit to an offensive line that ranked in the Top 20 in both Adj. Line Yards and Adj. Sack Rate. Three second-year starters return up front: tackle Jason Kons, guard A.J. Wallerstein and center Michael Hester. 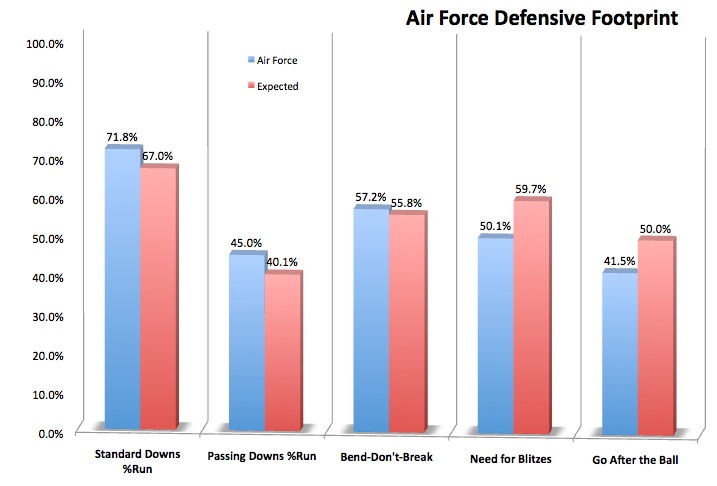 Despite some obvious limitations, the Air Force offense was consistently decent in 2010, "allowing" between 24.3 and 33.5 Adj. Points in 10 of 13 games. They played poorly against poor offenses, and they regressed from where they were in 2009, but their 3-4 was still tricky enough without departed defensive coordinator Tim DeRuyter (now in his second year at Texas A&M) to remain at least an average unit.

That they remained decent is a huge compliment to the secondary and the pass defense as a whole -- they got absolutely nothing from an out-manned defensive line that ranked worse than 105th in both primary line categories (Adj. Line Yards, Adj. Sack Rate). They were as ineffective as their offensive line was effective. This probably won't change in 2011; returning tackle Ryan Gardner is just 260 pounds, and his backups are 255 and 245 pounds. For all intents and purposes, the Falcons line up three defensive ends on the line, and against a big, effective offensive line, they will be at a severe disadvantage.

Even-numbered years and all...

"Ain't Even Done with the Night," by John Mellencamp
"Even Better Than the Real Thing," by U2
"Even Cowgirls Get the Blues," by Gaslight Anthem
"Even Flow," by Pearl Jam
"Even the Losers," by Tom Petty & The Heartbreakers
"Even When Yer Blue," by Joseph Arthur
"Even You," by Dinosaur Jr.
"I Don't Even Know Myself," by The Who
"Nothing Even Matters," by Lauryn Hill
"You Never Even Called Me By My Name," by David Allan Coe

The top four teams should be no surprise whatsoever.

With BYU and Utah leaving the Mountain West and TCU getting ready to do the same, the conference is in the market for a new No. 2 (after clear No. 1 Boise State). Looking at recent performance, the clear, obvious candidate is Air Force, even considering incoming programs like Fresno State, Nevada and Hawaii. The Falcons are the only non-Boise team in the Future MWC to rank in the Top 50 in Four-Year F/+. And just think where they might rank if they were allowed to play only in odd-numbered years, eh?

Air Force returns an average number of starters and had average results, both in terms of fumble recoveries and Yards Per Point margin. They should certainly be as good as they were last year, though their odds of making another odd-numbered surge have to be considered pretty low. They are what they are right now: an eight- or nine-win mid-major team who can be pushed around but is a major pain to play ("Major Paine"). The Football Outsiders Almanac 2011 has them projected at 8-4 with a Proj. F/+ of 56th. Really daring pick there, eh?