Share All sharing options for: Sophomores, More Sophomores And The Western Michigan Broncos

Western Michigan confuses me. They've finished .500 or better in 15 of the last 23 seasons and are one of the more consistent winners in the conference, but they haven't been to a MAC title game in 10 years. They build up potential big, young coaching names (Gary Darnell, for instance), then break them down. It appears you can win in Kalamazoo, but you can't win too terribly much.

In 2010, the Broncos were no less confusing. They threw more than almost anybody in the country, but they threw to only two guys. They rushed the passer better than most major conference teams, but their pass defense was still quite poor. They won by margins of 15, 29, 34, 35, 35 and 36, and they lost by margins of 13, 20 (to Idaho!), 24 and 24. They played all of two games decided by a touchdown or less; that they lost them both defined their season. Instead of their third season of eight wins or more in the last five years, a WMU team that was perhaps better than the 9-4 squad of 2008 finished with an entirely forgettable 6-6 record.

WMU's F/+ ratings suggest they were an above-average MAC team, but they were never simply above average. They were either great or terrible. Youth can explain some of this -- the secondary was littered with freshmen, the quarterback was a sophomore, the best running back was a freshman who didn't debut until mid-season -- but ... all of it? We'll see. If youth was a major cause of WMU's downfall, then their ceiling could be awfully high in 2011.

One thing is certain: Western Michigan pulled off a picture perfect "young team" impersonation in 2010. They started slow and improved significantly as the season progressed.

Though the defense went through ups and downs, the offense went steadily up. As we'll see below, this was partially due to a freshman running back, but whatever the cause, WMU went from playing like a Bottom 20 team (which is where a minus-10.2 Adj. scoring margin would get you ranked) in September to playing like a Top 35 team in November. With 15 starters back, that is certainly something around which to build. 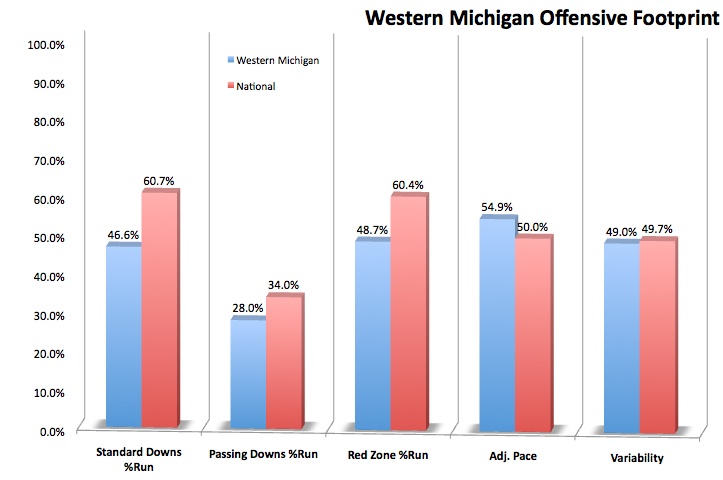 During my profile of the run-happy Georgia Tech offense, I spent a good portion of time talking about the passing game. So now I turn the tables and talk about Western Michigan's run game. WMU's top four running backs combined for fewer than 20 carries per game, but a successful late surge on the ground showed how much better an offense can be when opponents have to account for everything. That late surge's name: Tevin Drake. The most highly-touted member of WMU's 2010 recruiting class, Drake was not cleared to practice by the NCAA clearinghouse until after the season had begun. It took him a little while to get up to speed, but by midseason, head coach Bill Cubit came to realize he couldn't keep Drake off the field.

His performance was stunning. When Drake received at least five carries, WMU was 5-0; in those games, Drake carried just 36 times for 397 yards. He threw in a 49-yard reception to boot. He led the Broncos (again, in just six games) with 405 rushing yards, and his +18.3 Adj. POE would have ranked him 12th in country if he had enough carries to qualify. He was an absolute revelation, and considering who he replaced (Brian Fields, Aaron Winchester and Dareyon Chance combined for -6.8 Adj. POE), the difference he made on the WMU offense starts to make sense.

In 2011, we will see what Drake is capable of when given a full load. He certainly won't average 10.1 yards per carry (oh, but if he did...), and WMU probably won't average 38.5 Adj. PPG (a top ten-caliber total) for an entire season. But there's really little reason to doubt he isn't already one of the best running backs in the MAC, and if WMU's run game improves beyond last year's iffy ranking of 81st, then the Broncos become quite dangerous. Even if WMU's run-pass ratios don't change, Drake could massacre opponents that focus too heavily on the pass.

If there is a concern in the run game (beyond what happens if Drake gets hurt), it is the offensive line. In guards Phillip Swanson and Nick Clemens and center Nick Mitchell, WMU must replace a combined 10 years of starting experience. And in terms of run blocking the line really wasn't that great with these three last year. There is hope up front, especially in guard Anthony Parker (25 career starts, all-conference in 2009, and not this guy) and huge tackle Dann O'Neill, a 6-foot-8 Michigan transfer who started ten games last year. But that is still a lot of experience to lose at once. 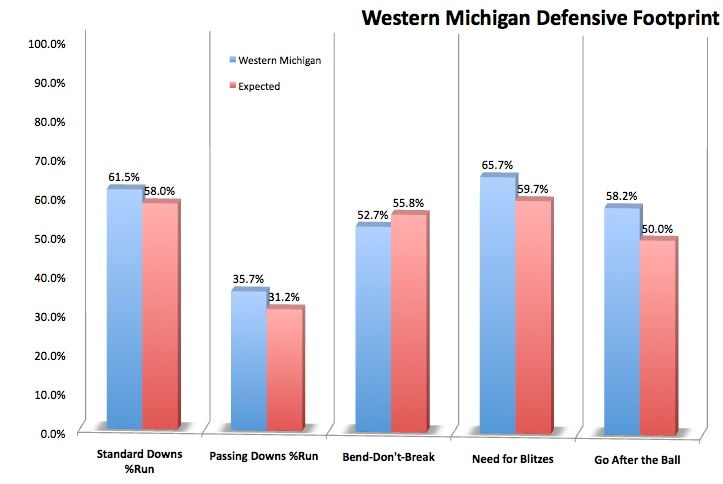 Let's play the Optimist vs Pessimist game for the first time in a while!

What an optimist sees from WMU's defense: Despite a depth chart littered with freshmen, the Broncos' defense improved in 2010, both from 2009 and from the start of the season to the end of the season. Their line stats were great, and all relevant linemen return. An incredibly young secondary survived a tough year and will only get better from here.

What a pessimist sees from WMU's defense: They had a great pass rush but still ranked just 98th in Passing S&P+, meaning their secondary was potentially one of the worst in the country. Now two of their three best tackles-for-loss guys are gone. Youth can only explain so much about a secondary that bad, and if the pass rush is going to be worst this year, how will the defensive backfield make up the difference?

What do we know for sure?

"I Go To Extremes," by Billy Joel. Welcome to the team profiles, Billy. 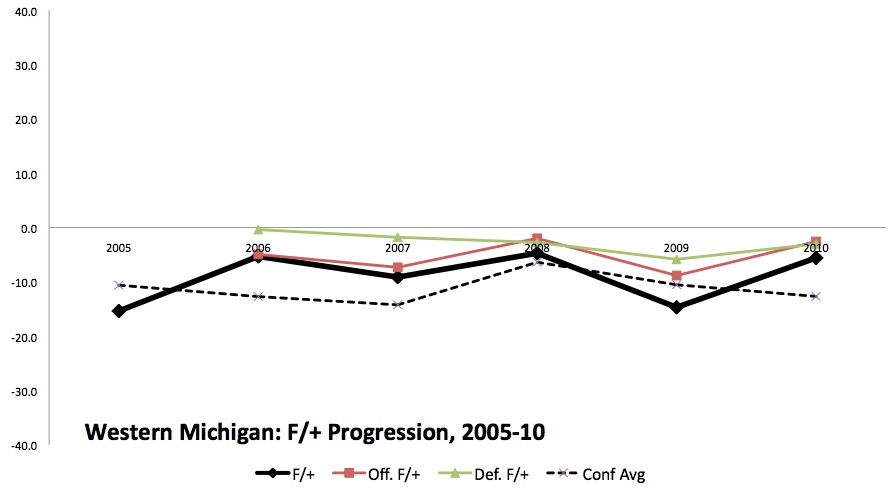 As with Toledo, I seem to be talking myself into Western Michigan. This has been a kooky team in recent years, usually good (aside from the end of the Darnell era), but usually not too good. If the secondary is indeed improved, and if Tevin Drake's encore is as good as his debut, then perhaps only Toledo has a higher ceiling than the Broncos. But if the secondary isn't any better, and if the quality on the offensive line plummets, then things look a lot different.

One thing is certain: WMU has plenty of chances to prove itself this fall, mostly away from Kalamazoo. The non-conference season includes trips to Michigan, Illinois and UConn, three solid teams who could easily be vulnerable to an upset if the stars align. Upsets or no, however, the season could be defined the most by a Tuesday night trip to Toledo on November 8. If Northern Illinois takes a step backwards without Jerry Kill, then the Broncos-Rockets winner could be in the driver's seat in the MAC West.

Perhaps the most exciting aspect of this team, however, has little to do with 2011. If the projected starting lineups hold true as expected, then WMU will return another 14-16 starters next year. Carder is a junior, and the aforementioned load of sophomores will be around a while longer. There will be work to do in the receiving corps, but otherwise the table is set for a nice run for Cubit and company.