[Bumped to the Front Page.]

One thing I've done on Team Speed Kills in the past is produce charts illustrating where SEC teams ended up in terms of points and yardage. Here are 2010's charts. They're not as rigorous as the usual methods around here, as they employ points and yards per game rather than down-by-down metrics, but they give a nice 30,000-foot view of where conference offenses and defenses were relative to each other in amazing Technicolor.

I decided to make similar charts for a sampling of schools nationwide. Just taking their YPG and PPG stats off the national rankings would not really be good, so I decided instead to use standard deviations in conference play. This approach was not directly inspired by Matt Melton's SDPI, but I'm sure it was involved indirectly.

First up is offense. 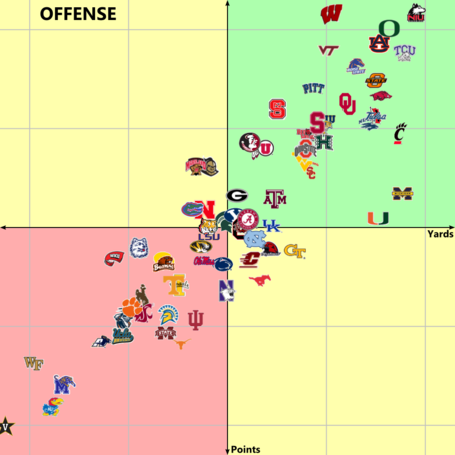 All of the SEC schools are included, because that's which blog I write for, but I threw in schools from the top, middle, and bottom of other conferences too. All teams from the preseason and post season top 25 are in there. All logos are visible and identifiable except for Louisville, which is mostly obscured by LSU.

What strikes me most is how far out there Northern Illinois was ahead of the rest of the MAC pack. Another is the disparity between the one-loss (in conference play) Big Ten teams. Wisconsin was a scoring machine, Ohio State was solidly above average in both points and yards, and Michigan State is practically on the intersection of the axes.

Perhaps my favorite thing about these charts is the way that teams end up right on top of each other. In these categories, relative to their conferences in conference play, we see that Florida and Nebraska were about the same. So were Stanford and FIU, Tennessee and Idaho, and (gulp) Clemson and Washington State.

So have fun with that one seeing all the patterns you can find. Next up is defense. 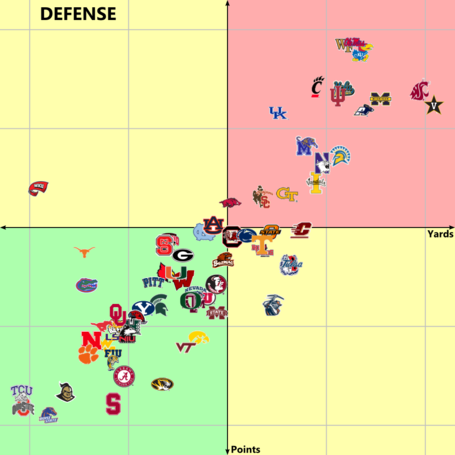 Teams are a bit more clustered around the 45 degree line on this chart than the last, but three teams stick out. Florida and Texas do for proportionately giving up a lot more points than yards; great defenses opposite poor offenses will do that.

Western Kentucky sticks out the most, but that's a function of the remarkable consistency of Sun Belt defenses in 2010. The standard deviation in yards per game allowed in Sun Belt conference play was just 17.37, with the next lowest for any league being the Pac-10's 39.97. WKU's defense allowed 33.22 yards per game below the conference average, putting it 1.91 standard deviations below the mean.

The interesting groups here for me are TCU-Ohio State, SMU-LSU-Hawaii-Oklahoma-NIU, Oregon-Texas A&M, UConn-Tulsa, and Indiana-UCLA. Keep in mind that groupings on these charts don't necessarily reflect defensive parity as points allowed include special teams scores (among other issues).

Finally, I made a combined offense and defense chart. To do so, I simply added the standard deviations for points and yards and then plotted them. The numbers themselves don't carry much intrinsic value, but they help space out where everyone was nicely. 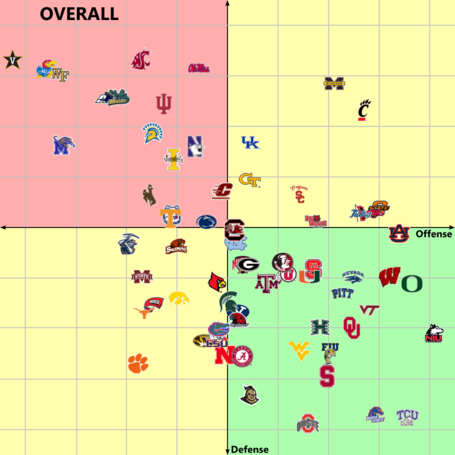 The only logo really obscured is SMU, which is beneath Florida and LSU and next to Missouri.

It comes as no surprise that no one dominated their conferences as thoroughly as Boise and TCU did theirs. It's also no surprise that the worst of the worst were Vandy, Kansas, and Wake Forest. What this chart does do well is crystallize some of your assumptions and highlight some teams that might have been better than you thought they were.

You probably thought Michigan and Cincinnati were classic teams with great offenses opposite sieve-like defenses. That's right. Clemson was indeed a team that couldn't do much offensively but didn't let its opponents do much either. You knew Stanford was more balanced than Oregon, though there is the caveat that Oregon's madcap offensive pace led to more points and yards allowed on defense.

Of course, the most fun thing here is still the pairings. NC State and Miami (FL): both went 5-3 in the ACC, so it makes sense. UConn and Tennessee: poor Vols. Maryland and Georgia: luck makes a difference. Florida, LSU, and SMU: wait, what?

So I hope these charts add a little more than just some color to your day. I know they're of limited use, but I hope they're at least fun.