Texas "Would Have Been A Good Team If Not For The Turnover Ratio"?

Share All sharing options for: Texas "Would Have Been A Good Team If Not For The Turnover Ratio"?

Mack said UT would have been a good team last year if not for the turnover ratio.less than a minute ago via web

Texas isn't up quite yet in the SBN preview series, but I wanted to give a sneak preview to address a comment made by Mack Brown at today's Big 12 Media Days session. One of the best politicians in college football, Brown mentioned that Texas was basically a few turnovers from being a good team in 2010. No, Mack, Texas was a few turnovers away from being a mediocre team. 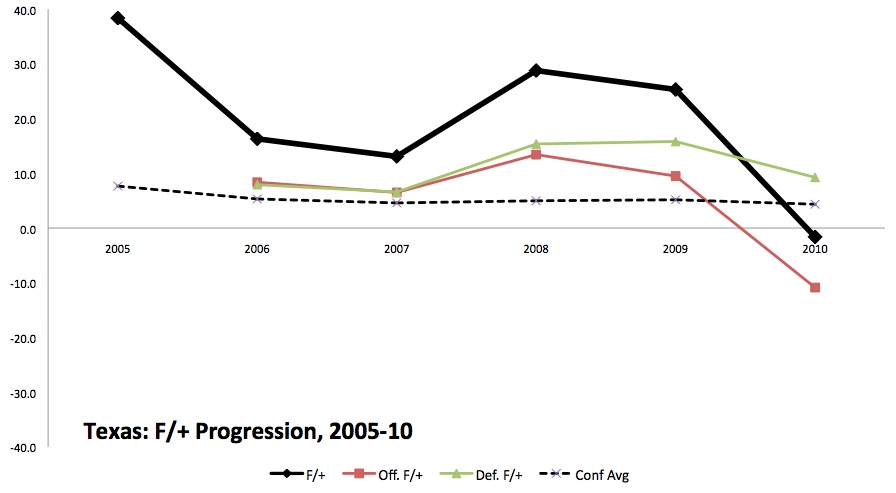 The 2010 Longhorns had a good defense -- not quite as good as in 2008-09, but good -- and a downright horrific offense. Without Colt McCoy around to bail them out on passing downs, their Off. F/+ ranking fell from seventh in 2008, to 16th in 2009, to an incredible 106th in 2010. They were sandwiched between Florida Atlantic (105th) and Louisiana-Monroe (107th). The only BCS conference teams with a worse offense: Purdue (112th), Kansas (114th) and Vanderbilt (115th). Did turnovers impact this number a bit? Yes. A bit (part of F/+ is Brian Fremeau's drive-based FEI measure, which obviously cares about drives ending without points). But not much. And you just cannot field a good overall team with an offense this terrible.

Now, the odds of Texas bouncing back in 2011 are rather strong. Look at their major projection factors:

They had incredibly poor fumbles luck, and without it they'd have probably made a minor bowl game. But this is Texas; is there really a difference between a minor bowl and no bowl?

Texas' recruiting rankings are, of course, bananas, and their YPP margin suggests a bit of a bounceback too. They could be good in 2011, but only if the offense rebounds under new co-coordinators Bryan Harsin and "The" Major Applewhite. And I'm sorry, Mack, but there's nothing that would have made them good in 2010.