The New Mexico Lobos And How To Disappear Completely

Share All sharing options for: The New Mexico Lobos And How To Disappear Completely

The dregs of FBS typically change about as infrequently as the elites. Bless his heart, DeWayne Walker is trying his hardest at New Mexico State, but to say that the NMSU job is an uphill climb is stretching the definition of "hill." Same with Ron English at Eastern Michigan. Some jobs are simply difficult. But ... New Mexico?

From 2001 to 2007, Rocky Long's Lobos finished .500 or better every season, going to five bowls in six years, knocking off the likes of Arizona, Missouri (I still have nightmares about this game), Texas Tech and Baylor along the way. They were a rock solid, above average mid-major program. Not exactly Utah, but not exactly New Mexico State either. But the Lobos fell to 4-8 in Long's final season (2008); when Long left Albuquerque, UNM turned to former Ron Zook assistant Mike Locksley...

...who has gone 2-22. Two and twenty-two! I always say that a new coach deserves at least three years on the job to establish himself and his bona fides, and clearly New Mexico Athletic Director Paul Krebs agrees. But let's just say that if Locksley had been removed from his duties after just two seasons, 22 losses and one fight with an assistant (and subsequent suspension), I wouldn't be tut-tutting the decision too much.

So where does New Mexico, not that long ago a decent program, go from here? Is there any semblance of breakthrough talent on hand? Immediate answers are neither clear nor encouraging, but quite a few transfers from BCS schools will at least ensure that some new blood gets worked into the mix this year.

The less said about New Mexico's season, the better. The Lobos knocked off Wyoming to avoid a winless season, and they twice came within a touchdown of an "Adj. Win" (meaning they'd have beaten a perfectly average team with their performance that week) ... and that's about the most positivity I can manage. Lineup instability and lack of playmaking talent doomed this team. 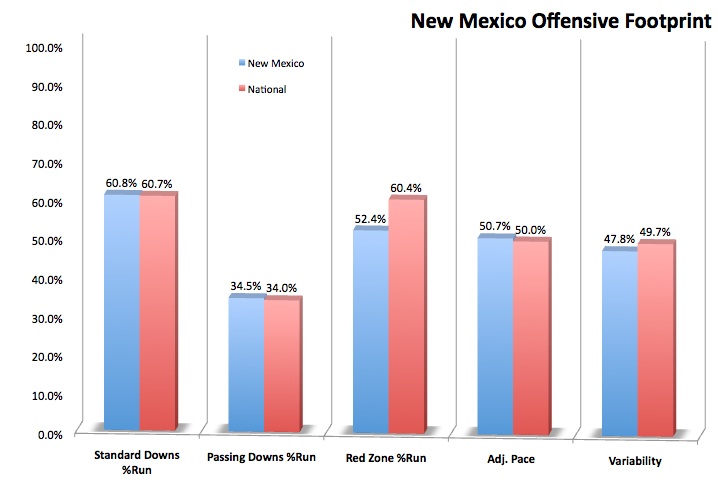 New Mexico's offense was as boring on paper as it was ineffective on the field. The Lobos ran and passed at perfectly normal rates, they ran plays at a perfectly normal pace, they varied the script to a normal level … the only abnormal thing they did was throw a lot in the redzone, and guess what: redzone offense was the best part of their offense.

When you don't have enough talent, you have to get creative to move the ball. Considering the Lobos had the least explosive offense, and the least efficient passing game, in the country, it's safe to say the talent wasn't really there. So now they have to figure out how to get creative. Who can first-year offensive coordinator David Reaves turn to for success in moving the ball? Honestly, I'm not sure.

Of all the major returnees, the player with perhaps the most overall potential, by far, is tight end Lucas Reed (459 yards, 13.9 per catch, 70% catch rate, 5 TD). At 6-foot-6, 232 pounds, he is a long, lean receiving option (and probably a better receiver than blocker); of the Lobos' four primary receivers last year, only Reed averaged more than 8.1 yards per target. He's an intriguing weapon, but he can't catch every pass. It is unclear who will step up at receiver -- Bryant Williams (290 yards, 12.4 per catch, 65% catch rate, 3 TD)? Ohio State transfer Lamaar Thomas? Redshirt freshman Deon Long? Incoming star recruit Daniel Adams, easily the highest-rated member of the incoming class (according to Rivals)? Converted defensive back Emmanuel McPhearson? The potential athleticism here is higher than it has been, but there is almost no proven production outside of Reed. 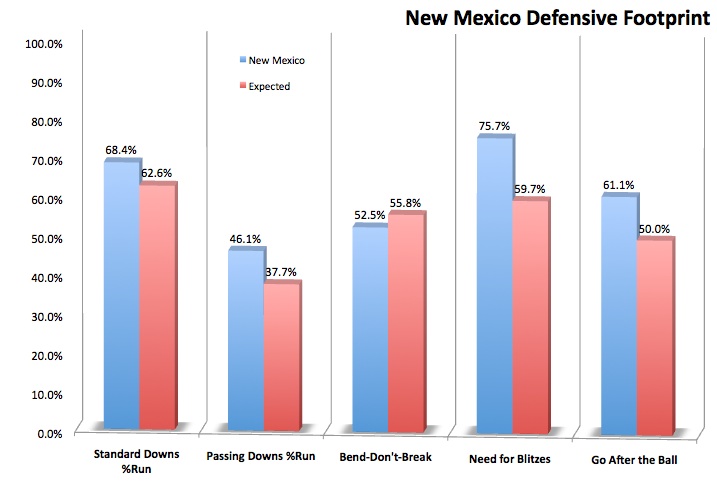 New defensive coordinator George Barlow has his work cut out for him. Not only does he take the reins of a miserable defense (for which he was defensive backs coach last year), and not only does he have to figure out how to improve a unit that was the fourth-least efficient, ninth-worst at big-play prevention, and fourth-worst against the run ... but he has to account for some late personnel losses as well. Star recruit Calvin Smith, a tackle, recently announced his transfer, while former star Johnathan Rainey (41.0 tackles, 15.5 TFL/sacks in 2009), an end, has been declared permanently ineligible to play after suffering a broken bone in his neck last year. Thanks to the same mix of ineffectiveness and odd injury that impeded the offense's progress, the Lobos threw a TON of different lineups onto the field last year. That's a good thing for the unit's overall experience level, but it's certainly more difficult to find a lineup that works.

Despite the losses of Rainey, Smith, end Seth Johannemann (31.5 tackles, 5.5 TFL/sacks) and tackle Peter Gardner (29.0 tackles, 6.0 TFL/sacks), UNM somehow still returns six linemen who recorded double-digit tackles last year. The best of the bunch are probably tackle Ugo Uzodinma (18.0 tackles, 3.5 TFL/sacks) and end Jaymar Latchison (34.0 tackles, 3.0 TFL/sacks). Also at tackle, Illinois transfer Reggie Ellis (7.5 tackles, 1.0 TFL/sacks) returns for his second season in Albuquerque, while Texas A&M transfer Rod Davis enters the fray as well. Smith and Rainey probably had the highest upside of the bunch, but there is experience here, and as we see above, even with Smith and Rainey playing minor roles, the Lobos' biggest strength was by far the pass rush. If the 300-pound Davis and 270-pound end Omar Castillo (a transfer from Texas Tech) can help them stand up against run blocking, then this unit could improve, at least until the next creative injury.

The linebacking corps probably has the best depth of any unit on the Lobo defense. Carmen Messina (83.5 tackles, 6.0 TFL/sacks, 2 FF, 4 PBU) is a second-team all-conference performer, while Spencer Merritt (47.5 tackles, 6.5 TFL/sacks, 7 PBU) and Joe Stoner (46.5 tackles, 3.5 TFL/sacks, 1 INT, 4 FF, 3 FR) have both proven to be solid playmakers. (Of course, looking at the numbers above, they are also pretty good play-allowers.) Throw in Dallas Bollema (28.5 tackles as a redshirt freshman) and Maryland transfer Javarie Johnson, and it's almost a shame that Reaves is moving toward a 4-2-5 scheme and putting only two linebackers on the field.

Radiohead's "How to Disappear Completely," of course.

Presumably the only reason UNM isn't higher on this list is because they weren't very good in 2008 either. That they started at a below average position and still managed to lose 26% from their ratings is astounding. 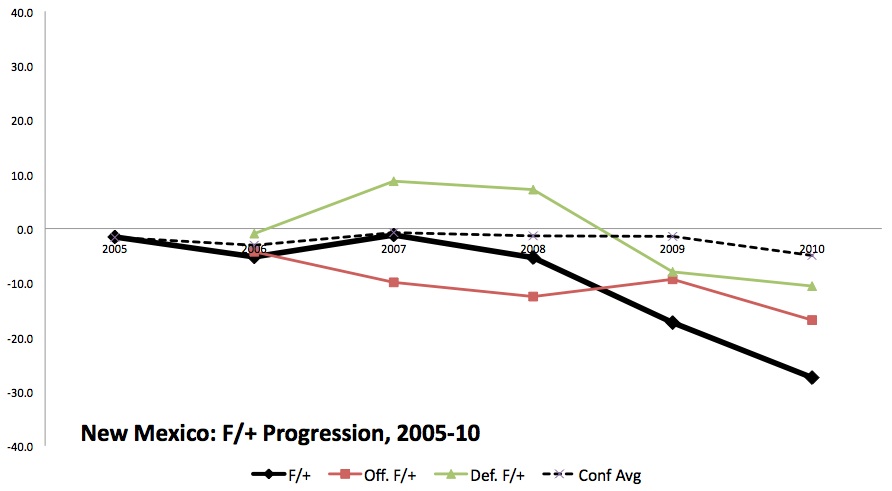 So how has New Mexico disappeared completely? How have they gone from a program with solid athleticism and a confounding 3-3-5 defense to a team praying that some transfers can lead the way to multiple wins in a single season for the first time since 2008? I always find myself looking for optimism with the teams I write about in this series, and I'm really struggling to do so. This is Washington State-esque, careening-off-a-cliff territory here, and I'm sure how you pull out of such a tailspin.

If there's any sort of encouragement to be found here, it's that Washington State improved at least a bit in 2010 after bottoming out in 2008-09. And really, it's not out of the realm of possibility that the offense might at least stay the same while the defense improves a bit.

Actually, there's another piece of encouragement: the schedule. Four of the most beatable teams on the slate come to Albuquerque: Sam Houston State, New Mexico State, Colorado State and UNLV. Win those four games, and you've doubled your two-year win total. Though that might not be enough to make Lobo fans believe the program is back on track, it would certainly represent tangible improvement.