Share All sharing options for: Summer Vacation: Capitalist Pigs And The Toledo Rockets

In last weekend's Central Michigan profile, I said the following:

Winning in the Mid-American Conference is like winning in the NFL: just about anybody can do it once (aside from Eastern Michigan and the Cleveland Browns, anyway), but doing it again is incredibly difficult. The foundations of talent are so similar for each team that a single breakthrough player, or a coach who gets hot, can make the difference between 4-8 and a conference title.

For the most part, MAC teams recruit at almost the same level. Looking at the five-year recruiting rank that you find at the bottom of all of these profiles, you see that seven MAC teams rank between 86th and 97th (Akron, Kent State, Western Michigan, Ohio, Temple and Central Michigan) and another four rank between 104th and 112th (Northern Illinois, Ball State, Eastern Michigan, Bowling Green). That leaves, basically, two outliers: Buffalo (120th ... not that far behind that second tier) and Toledo (68th).

Relatively speaking, Toledo has found massive recruiting success under third-year coach Tim Beckman. The former Oklahoma State defensive coordinator has put together two classes much stronger than anybody else in the MAC. In 2010, their 27 recruits averaged 2.56 stars according to Rivals.com; only Temple and Northern Illinois averaged higher than 2.25. In 2011, their 2.45 average was atop the list again, with only Northern Illinois and Bowling Green topping 2.25.

Though they haven't exactly gone out and signed a bunch of four- and five-star blue-chippers, the difference between Toledo's recent recruiting and, say, Buffalo's has been rather pronounced.

We've said hundreds of times now that recruiting rankings are all about odds. If the coaching and development aren't there, then recruiting rankings don't really matter, especially once you sink beyond the four- or five-star level. But in a vacuum, where everybody develops at the same rate, then three-star recruits are quite a bit more likely to succeed than low two-star guys. If Beckman continues to bring in players of this caliber, then he will have figured out a way to derive a bit of a capitalist advantage in the most socialist of conferences.

So if recruiting does end up giving Toledo an advantage in the MAC, what will that advantage look like? Speed. Beckman has signed 16 three-star-or-better players: two RBs, four WRs, two OLs, two DEs, one LB, and five DBs. Eleven of the 16 are either WRs or DBs; in 2010, the passing game was a strength for both the offense and defense, and that strength could become magnified in future seasons.

Like savings bonds, it takes recruiting classes a while to mature. Toledo's freshmen and sophomores may be more talented than those of other MAC teams, but it's going to take a little while for that to pay off. In 2010, Toledo's level of performance was still solidly in the 80s in terms of F/+ rankings. In the MAC, of course, that was good enough for eight wins and their first bowl in five seasons. Both the offense and the defense oscillated between very good and quite poor, and strangely, the two units seemed to move in opposite directions at all times. The offense was good against Northern Illinois, and the defense was terrible. The defense was good against Ohio, and the offense was terrible. The Adj. Points Toledo both gained and allowed seemed to go up and down simultaneously, which ... well, it's odd. I don't have an explanation for it, it's just odd. 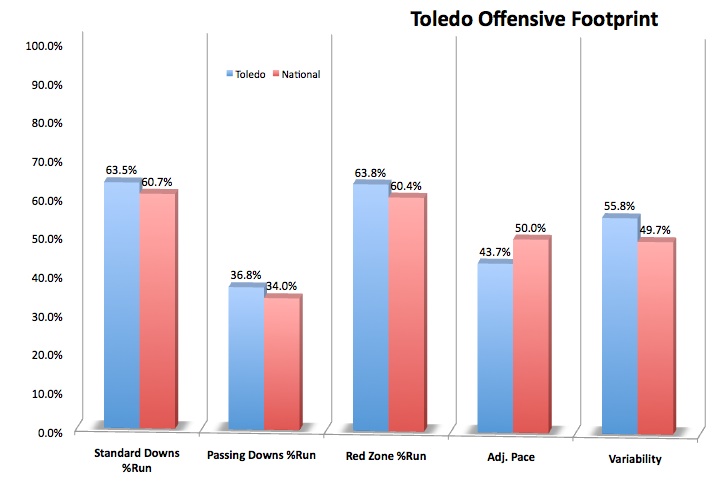 Despite an emphasis on recruiting high-caliber receivers, Toledo's was not a wide-open, pass-happy attack in 2010. They ran quite a bit, tinkering with the script a lot in the process. Three running backs gained at least ten yards per game, and all four return in 2011. The unit is very much led by Adonis Thomas (1,098 yards, 6.3 per carry, +8.4 Adj. POE), who, with that name, was destined to either be a running back or a professional wrestler. Thomas was a wonderful weapon, both on the ground and through the air (372 receiving yards, 84% catch rate, 2 TD), and he helped to make what was an unexpected transition from quarterback to quarterback a lot more bearable.

Starting quarterback Austin Dantin (1,254 yards, 6.5 per pass, 66% completion rate, 7 TD, 8 INT) played relatively well in 2010 (sans the interceptions), but after a minor injury knocked him out against Wyoming, Dantin suffered a separated shoulder against Eastern Michigan and missed the rest of the season. Terrance Owens (1,244 yards, 7.6 per pass, 60% completion, 13 TD, 5 INT) took over and, really, did even better.

The preseason depth chart shows Dantin and Owens as co-No. 1's, but it does appear that quarterback will be a strength no matter who wins the race. And either way, Eric Page is still available to catch passes. Page was the most heavily-targeted receiver in the country; 40% of Toledo's passes were directed at Page in 2010, an incredibly high number. Page (1,105 yards, 11.2 per catch, 71% catch rate, 8 TD) caught 99 of those passes; his style is a lot like that of former Bowling Green receiver Freddie Barnes: he is not going to burn you with big plays, but he is going to serve as one of the best possession receivers in the country. He was an extremely reliable option, and there's no reason to think he'll be any different in 2011.

Page's reliability opened up other receivers' opportunities and allowed offensive coordinator Matt Campbell to get aggressive in his play-calling. Kenny Stafford (337 yards, 18.7 per catch, 55% catch rate, 4 TD) was the primary deep threat in 2010 and has great size (6-foot-4, 204), but there is a deep group of receivers attempting to present themselves (and prevent Page from taking quite as many hits). Tim Cortazzo (133 yards, 12.1 per catch, 58% catch rate), Illinois transfer Cordale Scott, tight end Danny Noble (223 yards, 12.4 per catch, 56% catch rate, 5 TD), recent star recruits (Bernard Reedy, James Green) and incoming star recruits (Alonzo Russell, Justin Olack) could all play prevalent roles if given the opportunity. 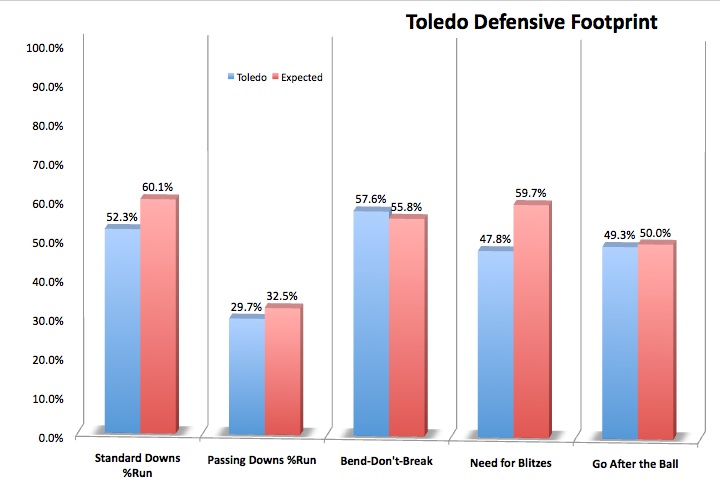 For all intents and purposes, the Toledo defense was a bigger defensive line away from being pretty stout. They limited big plays, they played well against the pass, they got to the quarterback with their defensive ends ... but they got bowled over by run blocking, and it limited their capabilities. Still, theirs was the 13th-best mid-major defense in the country and the best in the MAC by a small margin over Kent State. Not bad for having a glaring weakness. You could push Toledo around a bit, but if you didn't, they had the speed to keep up with you.

Last year's strengths should remain in 2011. The top six members of the secondary all return, including safeties Mark Singer (53.0 tackles, 2 INT, 3 PBU) and former four-star signee Jermaine Robinson (33.0 tackles, 1 INT, 2 PBU), and corners Desmond Marrow (56.5 tackles, 3.0 TFL/sacks, 3 INT, 6 PBU) and Byron Best (27.0 tackles, 3 PBU). If recruiting rankings are indeed to be believed, then cornerback Taikwon Paige (16.5 tackles, 1 INT, 2 PBU), safety Ross Madison and perhaps an incoming freshman like Chris Dukes or Kishon Wilcher should be ready to make a more steady impact as well. This secondary is about as deep as you can get in the MAC.

Meanwhile, the major weakness at least won't be any weaker. The Rockets must replace two backup defensive ends, but five interesting players return. Ends T.J. Fatinikun (37.5 tackles, 13.0 TFL/sacks, 4 FF, 2 PBU) and Malcolm Riley (31.5 tackles, 10.0 TFl/sacks) are excellent solid playmakers (especially Fatinikun), and Christian Smith (6.5 tackles, 2.5 TFL/sacks) had his moments as a true freshman. The tackle position is where improvement is needed, however. Johnie Roberts (23.0 tackles, 3.5 TFL/sacks) is solid, but Toledo has to be hoping that Elijah Jones (4.5 tackles, 3.0 TFL/sacks) can show consistency after a true freshman season that saw him make the most out of his 4.5 tackles ... but also saw him make just 4.5 tackles. Toledo may be recruiting laps around the rest of the conference, but they haven't signed a highly-touted tackle just yet.

When Gary Pinkel handed the baton to Tom Amstutz after the 2000 season, Amstutz was initially able to maintain a high level of play for the Rockets. From 1992 to 2005, Toledo suffered through only one losing season. But for the four years preceding 2010, Toledo's best record was 5-7. The 2010 season may have ended with a disappointing loss to Florida International, but...

"Back 4 You," by Jurassic 5
"Back Home," by Blue Scholars
"Back in Our Minds," by Funkadelic
"Back in the Chamber," by Del The Funky Homosapien
"Back in the Saddle," by Aerosmith
"Back in the USSR," by the Beatles
"Back in the USA," by Chuck Berry
"Back to the Earth," by Rusted Root
"Back to Your Heart," by Dinosaur Jr.
"Back Together Again," by Donny Hathaway 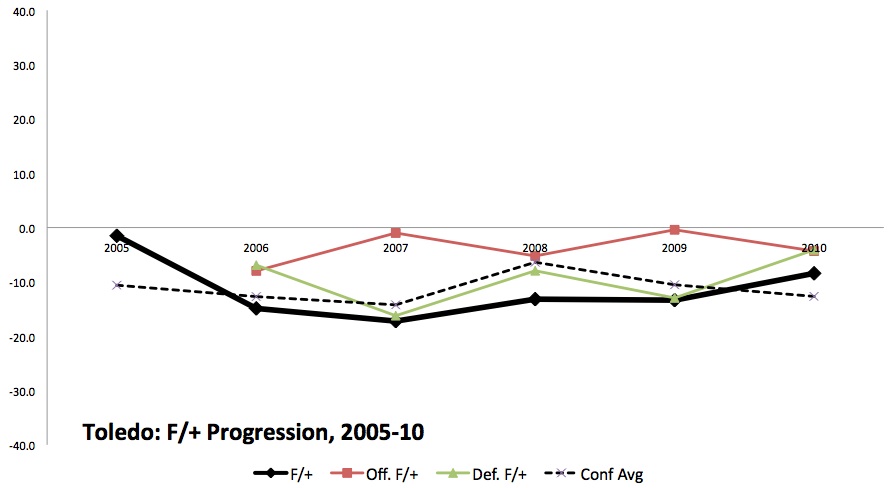 I'm really talking myself into Toledo. They are fast and experienced, and while their step forward in 2010 was something not much more than a baby step (they certainly benefited from some fumbles luck along the way), it certainly seems as if Tim Beckman is methodically putting the pieces together.

Lord knows they'll have an opportunity to prove themselves. After a tune-up against New Hampshire, here are their next four games: at Ohio State (Big Ten Network), Boise State (ESPN), at Syracuse, at Temple. If they are standing at 3-2 after this, then they're well on their way to double-digit wins, but really, this stretch is about survival. They could be pretty decent and still start 1-4, and their season will be defined by how well they bounce back. They are potentially more talented than each of their last seven conference opponents, but numbers sometimes don't matter when negativity takes over. Survive, then thrive.