Share All sharing options for: Local Legends And The Tulsa Golden Hurricane

NOTE: Confused? Don't miss the definitions and footnotes at the bottom. And as always, if you hate numbers, just skip to the words.

A while back, the always enjoyable Cowboys Ride For Free posted a helpful flow chart showing Oklahomans the school they should be adopting. The general gist: if you enjoy partying in Stillwater or are an Oklahoma State grad, adopt OSU. If you are a Tulsa grad or a Tulsa native over 50, choose Tulsa. Otherwise, you're probably choosing Oklahoma. From my 17 or so years in Oklahoma, I can say that this seems rather accurate. Why? Because I never actually met a Tulsa fan. I grew up two and a half hours from the greater Tulsa metro area, and I didn't grow up knowing too many 50+ year olds; everybody I knew was either an OU fan, an OSU fan or ... an OU fan. Tulsa almost seemed to have the same sort of minor league affiliation with OU and OSU as MAC schools have with Ohio State.

Though I grew up relatively close to TU, they always seemed like a novelty; it felt like they were capable of huge seasons, but they rarely actually produced. With John Cooper in charge, they went 10-1 in 1982, beating Air Force and Oklahoma State by double digits but missing out on a bowl. With Dave Rader, they upset a 10-win Texas A&M squad on their way to 10-2 and a Freedom Bowl win over San Diego State and their precocious freshmen, Marshall Faulk and Darnay Scott. But from 1992 to 2002, Tulsa averaged just three wins per season.

Since the beginning of the Steve Kragthorpe era in 2003, however, things have turned around. Tulsa has been one of the most consistently solid mid-major programs this side of Hattiesburg, winning at least eight games (and making a bowl) in six of eight seasons, winning at least ten in three of the last four, and qualifying for three conference title games in six years. They've also won four bowl games in six years, matching the total they had amassed in their first 70+ years of existence at the Division I level. With the talent at play in the Tulsa area -- not every Tulsa Union and Jenks player is going to end up at a BCS school ... it only seems like it -- there is no reason that TU can't field at least a decent team every year, and in the past decade it has begun to realize its potential.

With head coach Todd Graham getting hired away by Pittsburgh this past offseason, TU now turns to local legend Bill Blankenship, the architect of Union's recent dominance; he lost 26 games in 14 seasons as Union head coach, and after a few years of serving as a Tulsa assistant (and a few years of healing from past injustices), he gets a chance to keep the good times rolling at his alma mater.

Tulsa's 2010 season shows, to some degree, the benefits of both per-play (or per-drive) measures and opponent adjustments. Tulsa ranked sixth in the country by scoring 41.4 points per game, but a) they ran a ton of plays, and b) they did not exactly face a murderer's row of defenses outside of Notre Dame (and they only scored 13 offensive points versus the Irish, winning because of a blocked punt touchdown, a pick six, and a two-point blocked PAT return). They did, however, play in some ridiculously fun games; they combined for 100 points and lost via hail mary to East Carolian ... they shocked Notre Dame ... and down the stretch, they combined for 91 points with Rice, 106 points with Southern Miss, and 97 points with Hawaii, and won all three games.

While Tulsa may not have actually had the sixth-best offense in the country, one thing was apparent: they improved by leaps and bounds as the year progressed. So did the defense, for that matter. After a start that would have netted the Golden Hurricane an 0-6 start had they been playing average opponents every week (instead of, say, Bowling Green, Central Arkansas and Memphis), TU began to figure things out.

By November, Tulsa was one of the best mid-major teams in the country; they finished the season by trouncing a home Hawaii squad in the Hawaii Bowl. Apparently they did a little too well in the end, as Pittsburgh eventually hired Todd Graham away after their hire of Miami (Ohio) coach Mike Heywood fell through. TU was unexpectedly forced to find a new coach in the offseason, eventually zeroing in on Blankenship. If he leads Tulsa as well as he led Tulsa Union, the Golden Hurricane will be good a long time. Still, the high-school-to-college coaching jump doesn't always work out amazingly well, so we'll see. 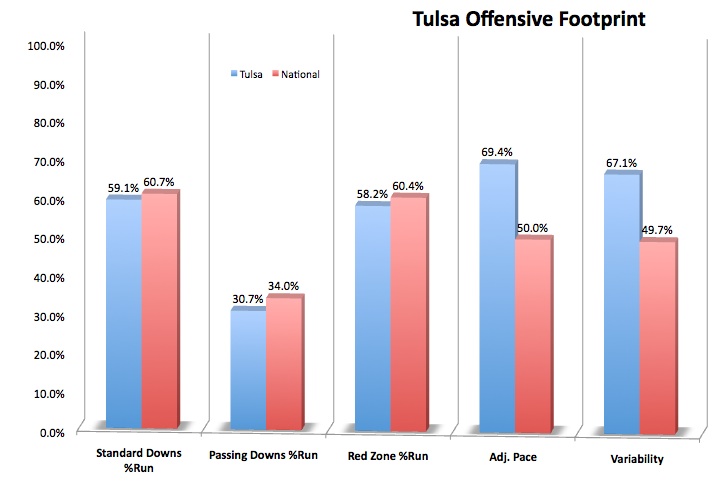 Tulsa's recent identity has been one of offense, offense, speed and offense. The Golden Hurricane ran plays at the highest possible rate and attempted to wear down weaker, slower Conference USA defenses. Looking at their recent win totals (2009 aside), it worked. With Blankenship in charge, it is doubtful that much will change, though it's worth noting that new offensive coordinator Greg Peterson does not have the same pace in his background. A Bill Snyder disciple who spent 12 years with Kansas State and was Northern Colorado's O.C. last year, Peterson will likely aim for the same type of balance to which Tulsa has become accustomed.

Aside from pace, perhaps the most interesting aspect of the Tulsa personality, in regard to how (or if) Peterson makes some changes, is how they shared the wealth last season. A receiver (Damaris Johnson) had 560 yards rushing, a running back (Charles Clay) had 526 yards receiving, and nine receivers were targeted at least five percent of the time (with only one targeted more than 16%). Some offenses go with one primary running back; for all intents and purposes, Tulsa went with five (six if you include Kinne). This was a true "get the ball in the hands of your playmakers by any means necessary" offense, one with high variability in every possible way, and that's probably not something to which Peterson subscribed at Kansas State. 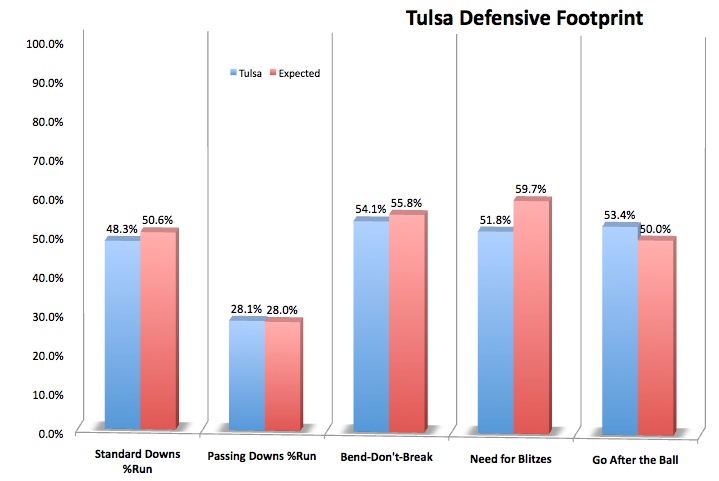 New defensive coordinator Brent Guy inherits a unit that struggled quite a bit with big plays, especially in the passing game. They got after the quarterbacks rather nicely, but if they didn't get there, they were probably giving up a big play. And really, that probably wasn't the end of the world for Graham, Hand and company; a fast scoring drive for the opponent just gave the Tulsa offense further opportunity to wear opposing defenses down with pace.

Like the offense (only, not as good), quite a few weapons return, including five of the top six from what was potentially the best, and youngest, unit on the defense: the linebackers. We'll start with an absolute missile in weakside linebacker Shawn Jackson. Jackson managed 68.5 tackles, 15.5 TFL/sacks, two interceptions, two forced fumbles and two pass breakups as a grayshirt freshman last season. He joins three other sophomores -- Donnell Hawkins, Cody Wilson and OLB/S hybrid DeWitt Jennings (combined: 56.5 tackles, 4.0 TFL/sacks) -- and senior Curnelius Arnick (89.0 tackles, 9.0 TFL/sacks, 4 INT, 4 PBU) to form a unit that made (and likely allowed) a metric ton of big plays. Experience here will do Tulsa significant favors.

Really, the entire front seven could be strong. Four of the top five linemen return, including end and playmaker Tyrunn Walker (32.5 tackles, 12.0 TFL/sacks, 2 FR, 3 PBU). The line did not hold up well to good run blocking, and I guess I shouldn't use the word "strong" here ... so instead, I'll just say that Brent Guy's first run defense will likely be better than his first pass defense.

There are two screamingly obvious choices here, and I'm not so much of a music snob that I can resist. Should I go with The Scorpions' "Rock You Like a Hurricane" or Neil Young's "Like a Hurricane"? We'll go with young Neil because I didn't have to sit through an ad to get to that YouTube clip. 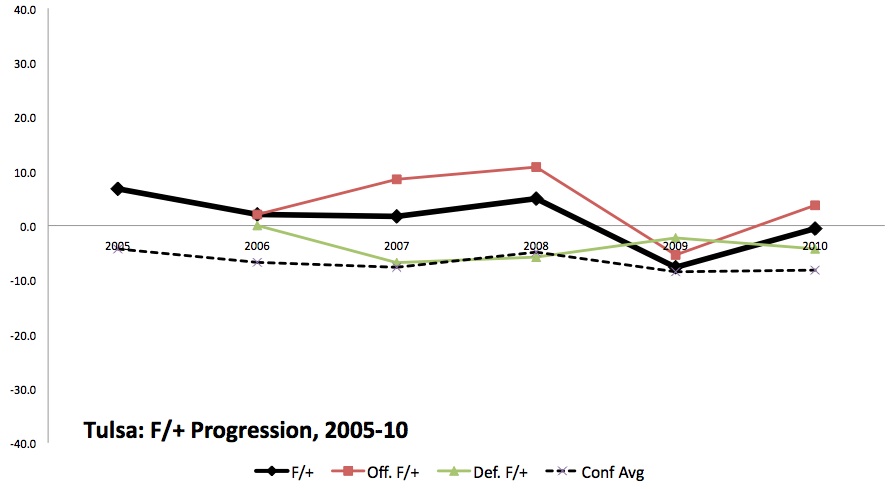 Without knowing what changes, if any, are in store with Blankenship and his staff, it's hard to completely know what to think about Tulsa's prospects for 2011, so I'm just going to press forward as if nothing will change. Tulsa returns as much proven talent on offense as anybody in Conference USA; Damaris Johnson is a star, G.J. Kinne appears to be a strong leader and the offensive line is strong and experienced. The defense lags behind a bit, but the front seven should be solid and Shawn Jackson's ceiling is extremely high. There's a lot to like here, so I'm going to assume Tulsa would be pretty good in 2011 no matter who happened to be head coach...

...as long as they survive September. The best Tulsa squad ever would probably still start 1-3 this season, with road trips to Oklahoma and Boise State and a visit from Oklahoma State. If they make it to October 1 with their spirit intact, however, they could get rolling just like they did last year. Trips to Rice and UTEP are far from intimidating, and the Golden Hurricane get SMU and Houston at home. Only the trip to UCF is a likely loss. Ten wins are unlikely unless TU wins the CUSA title game and their bowl, but their conference title hopes are strong.