Share All sharing options for: The Ball State Cardinals And The Downside To The MAC Life Cycle

We've gone through 11 of 13 teams in our leisurely stroll through the MAC; only Ball State and Northern Illinois remain. And no two teams hammer home the point I've been making over and over in these profiles: that while anybody can win in the MAC, almost nobody can sustain wins in the MAC. In 2007, Northern Illinois went 2-10, dumped Joe Novak and hired Southern Illinois coach Jerry Kill. Meanwhile, in 2008, Ball State started 12-0, established temporary residency in the Top 25, and lost their coach, Brady Hoke, to San Diego State. And both were looking for new coaches again this offseason.

Kill was successful enough (18-6 in the MAC, three bowl games) that he was 'called up' to the Big Ten; Minnesota hired him to replace the drastically unsuccessful Tim Brewster.  Meanwhile, after a 6-18 record in two seasons, Ball State dumped Stan Parrish and hired Elon coach Pete Lembo. NIU found a coach good enough to leave, and he left; a year later, Ball State found an experienced, old hand who wouldn't jump for a better job, and he wasn't good enough to keep the job. Life in the MAC in a nutshell.

So now Ball State hands the keys to Lembo, an interesting hire. He was extremely successful at Lehigh -- 44-14, two NCAA playoff appearances, and a top five finish in 2001 -- before making the odd move to fellow FCS program Elon; the results weren't as viscerally impressive (35-22), but he pulled off four consecutive winning seasons at a school that had won 14 games in the five seasons before he came, so he's got some game. And now he gets a chance at the FBS level.

Ball State certainly improved from 2009 to 2010, but not enough for Stan Parrish to keep his job. The offense showed occasional signs of life performing at or near an average level four times in 12 games; considering quite a few freshmen were in the rotation, there are at least small reasons for optimism on this side of the ball. The defense, however, was both somewhat experienced and simply dreadful, other than a random masterpiece against Buffalo. Winston Churchill would find it difficult being optimistic about the BSU defense. 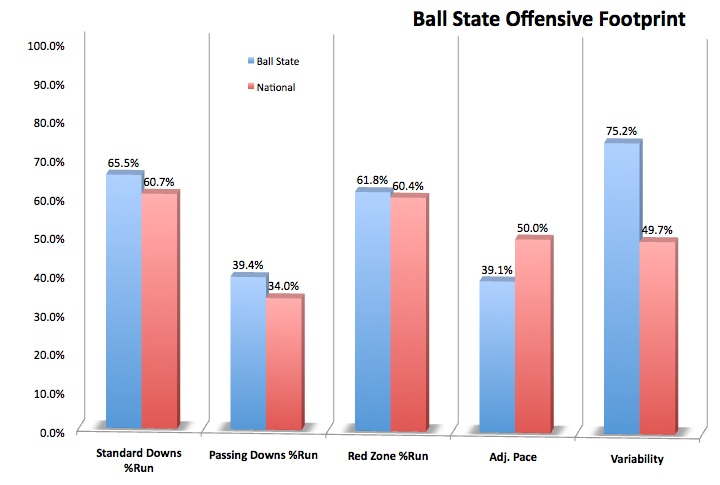 Ah, low expectations. In the last paragraph, I mentioned that Ball State offense played "at or near an average level" four times and announced that the offense had "at least small reasons for optimism." When compared to the defense, that is true. When compared to the rest of the country ... yikes.

Of course, if his time at Elon is any indication, new offensive coordinator Rich Skrosky might not worry too much about the run game. He was at the helm of a pass-happy Elon Phoenix offense. Ball State's offensive footprint will likely change quite a bit in 2011, and with the personnel at hand, that might not be a bad thing. By far the best returning weapon from last year is receiver Jack Tomlinson (484 yards, 16.7 per catch, 54% catch rate, 6 TD), whose 9.0-per-target average was fantastic for a true freshman. At 5-foot-9, 160 pounds, Tomlinson does not strike the most amazingly physical presence, but he made some noise last fall; not many on this roster can say that. No other receiver averaged above even 7.5 yards per target last year. As is often the case with freshmen, Tomlinson started slow then caught fire. Six games into the season, he had two catches for 39 yards; the next three games, he caught nine for 124. The final three games? Eighteen for 321. 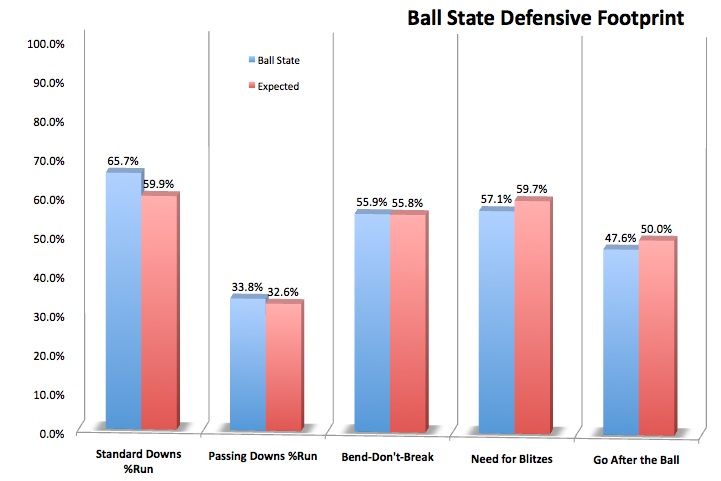 Hmm. It is actually difficult to figure out what to say about a defense that was this bad in this many different areas. Their line was the worst in the country against run blocking, worst in the country on first downs, and bottom ten in basically everything but Passing PPP+, Adj. Sack Rate and red zone numbers. Jay Bateman comes with Lembo from Elon, and all I can say to him is ... good luck. The offense will likely get better before the defense does.

For all intents and purposes, Ball State had three defenders who were downright good for their position: one (end Robert Eddins) is gone, two (safety Sean Baker and cornerback Jason Pinkston) return. Baker (70.0 tackles, 7.0 TFL/sacks, 6 INT, 2 FF, 4 PBU) and Pinkston (50.5 tackles, 1.5 TFL/sacks, 4 INT, 2 FF, 7 PBU) anchor what will probably be an improved, and relatively aggressive, secondary.

If the secondary isn't the relative strength of this unit, the linebacking corps probably is, if only because they are rather experienced. Only one of the top five departs, and three starter-quality LBs return: Travis Freeman (74.5 tackles, 6.0 TFL/sacks), Tony Martin (56.0 tackles, 3.5 TFL/sacks, 2 PBU) and Justin Cruz (42.5 tackles, 3.0 TFL/sacks, 2 PBU). None of the three really racked up the playmaker stats in 2010, but ... well, only two of the top eight tacklers last year were defensive backs. If nothing else, that tells me that they were decent at the act of tackling. (I'm trying really hard to be positive here.)

It's gone sour rather quickly for the Cardinals, hasn't it...

So when Hoke left, their defense fell apart ... then fell apart again the next season. 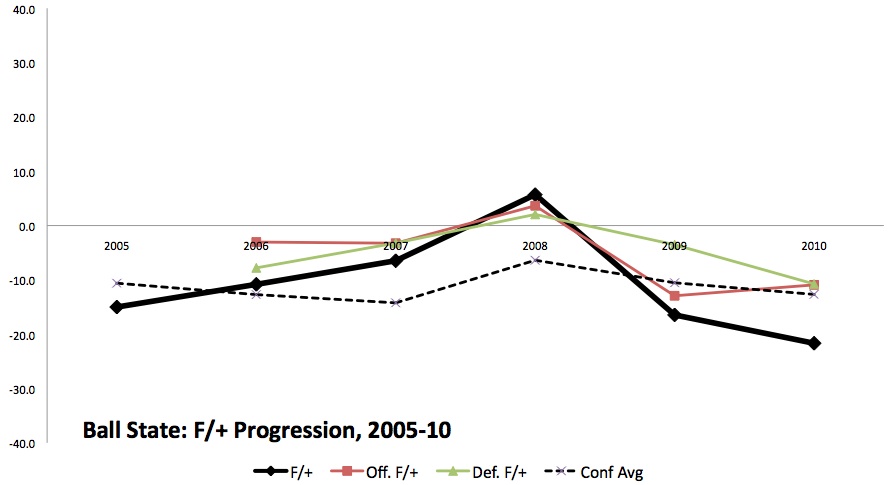 Ball State fell from 12-0 and No. 12 in the country to hopeless, from home attendance of 19,000 per game to 8,900, in less time than it takes my wife to buy a digital camera. The goal for Pete Lembo in 2012 is not necessarily a certain number of wins and losses; it's simply the restoration of hope. There are some winnable conference home games and plenty of opportunities to create some momentum, but only if they survive a brutal opening month. This year's non-conference slate: vs Indiana in Indianapolis, at South Florida, Army, at Oklahoma.

With a healthy number of starters returning and a healthy four-year performance average, it's not impossible to think that the baseline for this Cardinals team is a lot higher than we assume, a lot higher than they've shown in the last two years. But now they have to prove it. This team fell off a cliff recently, and now begins the climb back toward the top of the MAC.