Share All sharing options for: Summer Vacation: The Bowling Green Falcons And Some Long-Standing Personal Grudges

In his first two games in charge of what seemed to be a fading Bowling Green program, Dave Clawson engineered a 31-14 whipping of Troy and took a 20-6 lead in the third quarter against Missouri. A well-questioned hire coming from Tennessee, where he ran Phil Fulmer's final Volunteers offense with something less than aplomb, Clawson's first moves were steady ones. The Falcons even qualified for a bowl (granted, a frustrating one) that season despite blowing the lead in Columbia and losing four in a row afterward.  Clawson's first year had to be considered at least a marginal success.

Unfortunately, his first squad of Falcons was laden with seniors.  Only seven starters returned for a 2010 season that saw BGSU both start a ton of very, very underclassmen and tumble back to earth.  His second season must have felt like the true beginning of his tenure, and in playing so many freshmen and redshirt freshmen last year, the Falcons built experience on which they can cash in down the line.  But it's a long way back to even the relative "heights" of 2009 for this squad, and there is improvement to be made in virtually every unit on the field.

(Side note: I hate Bowling Green.  Not really, of course, but I would prefer it if Mizzou never scheduled them again.  If Clawson and BGSU had managed to upset the Tigers two years ago, he'd just have been doing what Urban Meyer had done in his BGSU debut; Meyer went 2-0 versus Mizzou in 2001-02, and Gary Blackney's squad beat Mizzou in 1995 to boot.  My friends and I were even treated well when we went to Bowling Green for the dreadful 2002 game -- a cop in the parking lot told us we were bound to have a good time, and we'd probably stay out of trouble as long as we didn't s*** on the grass ... and he was dead serious.  I have nothing against the good people of this northwestern Ohio town of 30,000. I just hate them is all.)

Considering their general youth, things did not start too terribly for BGSU in 2010.  It took a field goal with four seconds left for Troy to take out the Falcons in Alabama, and BGSU hung tough (especially on defense) against a good Tulsa squad.  BGSU took out Marshall in one of their two most impressive offensive performances of the season and stood at a respectable-considering-the-circumstances 1-2.  Then they went to Ann Arbor.  Denard Robinson rushed for 129 yards in about a quarter and a half, and Michigan hung 65 on the Falcons.  From there, it was mostly bad news.  Redshirt freshman quarterback Matt Schilz entered "learning on the job" mode, and aside from an outlier against Central Michigan, the Bowling Green defense was consistently overmatched.  Again, there was extreme youth at play here, so we would be foolish to draw too many conclusions from the evidence at hand, but the evidence at hand was rather damning. 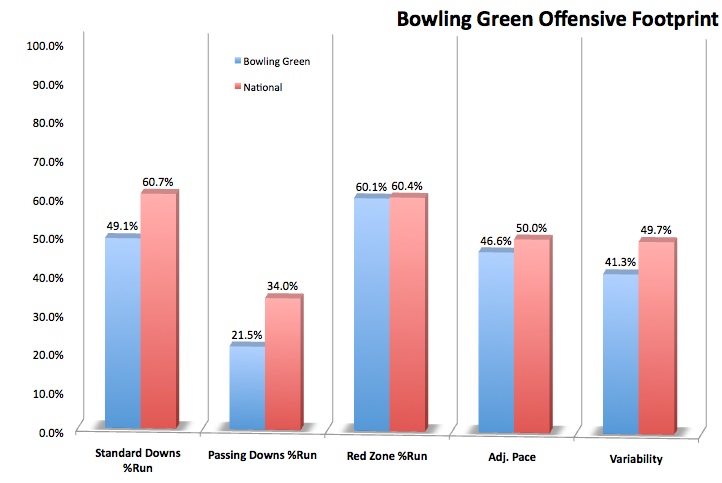 Bowling Green's is a pass-heavy offense based on efficiency and quick throws. The main problem in 2010: said efficiency-based passing offense was in no way efficient.  After ranking a respectable-for-a-MAC-team 52nd in Passing Success Rate+ in 2009 with Tyler Sheehan passing to Freddie Barnes, BGSU plummeted to 108th in the same category last year.  Completing passes was not, in and of itself, really a problem for Matt Schilz -- his 61% completion rate was perfectly respectable for a redshirt freshman; but considering the type of conservative throws he was making, he probably should have completed more.  Kamar Jorden did his best Barnes impression, catching 96 passes for 1,109 yards (11.6 per catch, 61% catch rate) while getting targeted 37% of the time (second-highest target rate in the country behind Toledo's Eric Page). But while his per-catch averages were similar to Barnes' from 2010, his catch rate was not.  If you are not going to provide much of a downfield threat, you need to be catching closer to 69% of your targets like Barnes did, not 61%. Be it the fault of Schilz or Jorden, the pass-and-catch efficiency between these two needs to improve if BGSU is even going to work its way back toward an average offense.

It probably doesn't help that the one big(ish)-play threat BGSU had last year is gone.  Tyrone Pronty was not a star receiver by any means, but he averaged 14.3 yards per catch at a 57% catch rate.  Of the primary returning receivers, only tight end Alex Bayer averaged more than 12 yards per catch; he averaged 13.5 and caught 76% of his targets for a robust 10.3-per-target average.  That he was but a redshirt freshman is exciting, but ... if your best downfield target is a tight end, you're probably still going to be limited.  Receivers Adrian Hodges and Eugene Cooper return, but they averaged 7.8 and 7.6 yards per catch respectively. 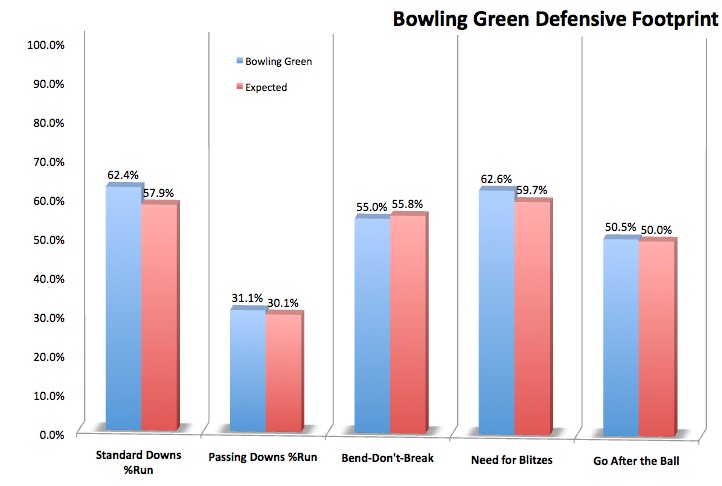 It's pretty clear from the stats that Bowling Green's goal is to leverage teams into passing downs, then tee off. They're obviously not unique in that regard (that's basically every defense in the country), but they did show quite a bit of effectiveness (comparatively speaking) on passing downs.  They just couldn't force any passing downs.  They had one of the worst standard downs defenses in the country, and therefore they had one of the worst defenses in the country.  Success in 2011 will depend on how much of 2010 was due to pure youth.  Of BGSU's top 16 defensive contributors, 11 return; five were freshmen or redshirt freshmen.

The Falcons' sack and TFL numbers were distributed evenly, suggesting the desire to attack from many different angles.  Six players had at least 5.0 TFL/sacks, while only two had more than 6.0.  BUCK linebacker Eugene Fells (65.5 tackles, 10.0 TFL/sacks, 3 FR) is gone, but in tackle Chris Jones (26.5 tackles, 11.0 TFL/sacks), BGSU has a potential star.  Linebacker Dwayne Woods (92.0 tackles, 6.0 TFL/sacks, 2 INT, 3 FF, 7 PBU) is strong as well.  Of course, diversity in attacks is good when you're a good defense ... when you're a poor defense, you need stars. A good tackle and a good MLB aren't enough.

So who's it going to be?  Safety Jovan Leacock (70.0 tackles, 1.5 TFL/sacks, 2 INT, 2 FF, 3PBU)? Wonderfully-named linebacker Boo Boo Gates (30.0 tackles, 1.0 TFL/sacks, 2 FR as a freshman)? There were no strengths for BGSU last year -- only relative strengths -- so wholesale improvement/maturing is needed.

How about "Second Chapter" by Blue Scholars?  "A tragedy and comedy so cue the blood and the laughter"?

Honestly, I have nothing statistically relevant to share about last year's BGSU team (I've already used the "receivers with ridiculously high target rates" thing a couple of times), so instead I'm just going to remind everybody how awesome former BGSU quarterback Josh Harris was.  He was a running back in 2001 until first-year coach Urban Meyer realized he was a better quarterback than Andy Sahm.  He was the muse for a lot of Meyer's early trickery with formations and some crazy spread looks, and he compiled a unique stat line over three years. 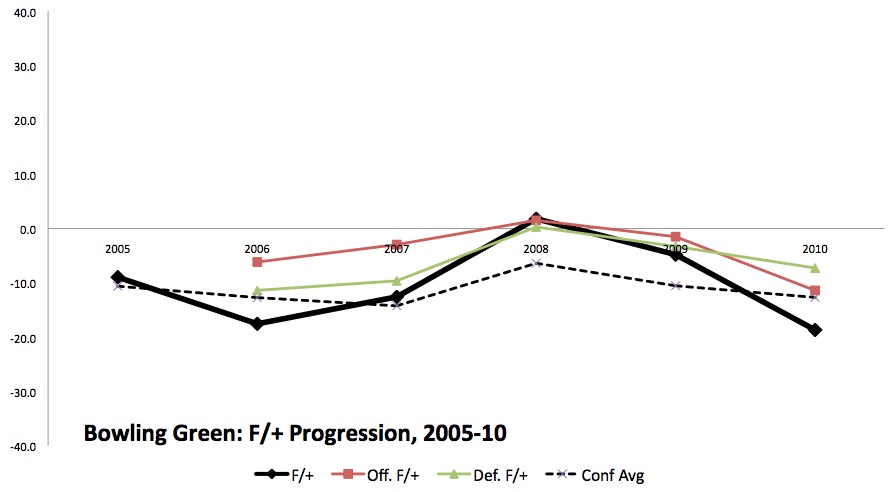 So Bowling Green went 2-10 while getting a little bit of fumbles luck and experiencing a rather normal YPP margin.  In other words, they were just bad.  The ray of sunshine is that they were also incredibly young.  Since I've already referenced Missouri a couple of times (and since I always reference Missouri a couple of times), I'll mention that at one point in 2009, the Tigers had 36 freshmen, redshirt freshmen and sophomores on the two-deep.  When the level of experience grew across the board in 2010, they went 10-3.  They didn't really get better in one specific better; they just got better and more experienced in every area.  If Clawson's 2011 squad improves, it will be in the same way -- they just get better everywhere.  Hell, just look at the example Miami (Ohio) set last year for when youth becomes experience.

There is reason for optimism in players like Matt Schilz, Kamar Jorden, Chris Jones, Dwayne Woods, and the young cornerbacks; but there is little reason to think BGSU will be an all-around solid team just yet, not with such question marks on the offensive line and in the defensive depth as a whole.  They fell far enough behind in 2010 that a nice bounce back probably only gets them into the middle of the MAC.  (Then again, Miami...)  Even if Clawson ends up being the right man for the job, a mediocre 2012 is probably still in order.