Summer Vacation: The Central Michigan Chippewas And Margin For Error

Share All sharing options for: Summer Vacation: The Central Michigan Chippewas And Margin For Error

Winning in the Mid-American Conference is like winning in the NFL: just about anybody can do it once (aside from Eastern Michigan and the Cleveland Browns, anyway), but doing it again is incredibly difficult. The foundations of talent are so similar for each team that a single breakthrough player, or a coach who gets hot, can make the difference between 4-8 and a conference title.

In the NFL, however, a) players are allowed to stay more than four years in one place (that doesn't mean they will, of course), and b) coaches don't leave for a better job at the first hint of success. (There are, uh, other differences between the MAC and NFL too, but we'll stop there.) While parity exists in the NFL, it goes a step further in the MAC. Players use up their eligibility, and coaches get called up to the Big Ten (or the Big 12, or the Big East, or...). Your reward for finding a great coach is having to find another one in three years. One bad hire, and you can fall very, very far. The margin for error is minimal.

Right about now, nobody knows this better than Central Michigan. The Chippewas hit a total home run in hiring Brian Kelly after the 2003 season. They had gone just 12-34 in four years under Mike DeBord, but Kelly came along and got things rolling quickly. CMU rose from fifth in the MAC West in his first year, to fourth in his second, to first in his third; they went 9-4 in 2006, whipping Ohio in the MAC title game ... and Kelly was gone before the Motor City Bowl, snatched away by Cincinnati.

So the Chippewas hired former CMU offensive coordinator Butch Jones as his replacement, and led by breakthrough quarterback Dan Lefevour, the wins kept rolling in. CMU won another MAC title in 2007, won eight games in 2008 (and finished second in the West), then won another MAC title in 2009. Four years of winning is damn near impossible in today's MAC, but with Lefevour and the Kelly/Jones combination, Central Michigan pulled it off. But Lefevour was out of eligibility ... and Cincinnati hired Jones away after Kelly moved on to Notre Dame (he was replaced by former Michigan State running backs coach Dan Enos, on whom the jury is clearly still out). Their reward for success was more coaching searches and a new quarterback, and in 2010 CMU swiftly and dramatically fell back to the pack.

So now, just one year removed from an extended (for this conference) run of dominance, CMU is trying to figure out a way to separate themselves once again. Can they? 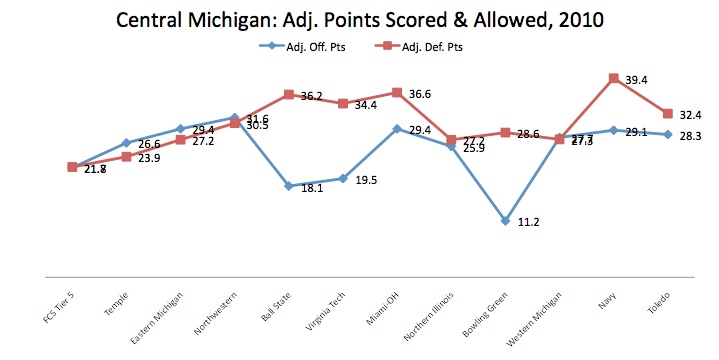 Things started in promising enough fashion. With a new quarterback, new staff, and new weapons, the CMU offense clicked as well as ever over the first month of the season. The Chippewas lost three turnovers in a defensive struggle against Temple, but they still looked solid overall. As opponents adjusted, however, CMU got severely bogged down before a late rebound.

Quarterback Ryan Radcliff struggled mightily in the middle third of the season (an injury to running back Paris Cotton didn't help), but with the late emergence of receiver Cody Wilson (35 catches, 420 yards in the last three games), things picked up. The defense, meanwhile, was much more consistent. Not better, just more consistent. 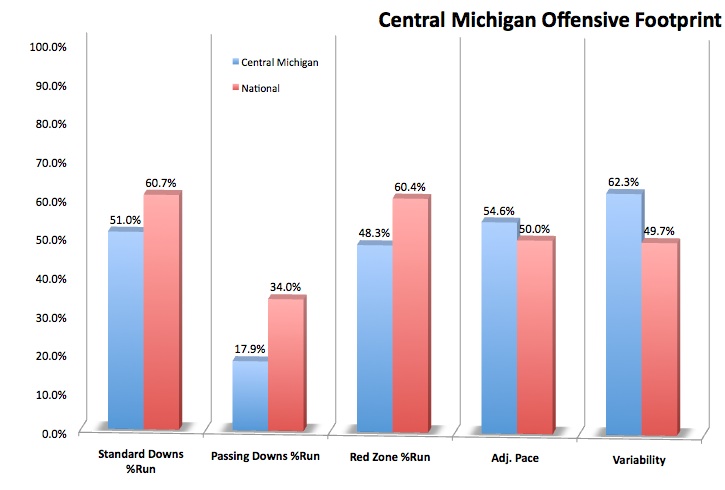 Through the ups and downs in Central Michigan's 2010 performance, one thing was constant: the Chippewas wanted to pass. A lot. Radcliff (3,358 yards, 7.2 per pass, 61% completion, 17 TD, 17 INT) launched 39 passes per game, throwing more than average on standard downs and quite a bit more than average on passing downs. That he completed 61% of his passes despite throwing a disproportional amount on passing downs is an encouraging sign for the future, though the slump, and the interceptions (3.6% INT rate), were obviously a bit disconcerting. The INTs should improve over time -- Dan Lefevour's INT rate was a solid 2.3% as a sophomore and a fantastic 1.5% as a junior/senior -- but the slump appears to have been due as much to lack of quality targets as anything else.

Does Cody Wilson's (1,137 yards, 13.7 per catch, 77% catch rate, 10.4 per target, 5 TD) late emergence solve that problem? Perhaps -- anything over 10 yards per target is absolutely phenomenal -- but he will likely need help. The only two other targets who averaged better than a mediocre 6.8 yards per target (Kito Poblah, Matt Torres) are gone. Wilson will be complemented by Jerry Harris (332 yards, 11.1 per catch, 53% catch rate), Cedric Fraser (210 yards, 13.1 per catch, 50% catch rate) and tight end David Blackburn (285 yards, 13.0 per catch, 48% catch rate, 3 TD), none of whom lit the world aflame last year. Quite a few redshirt freshmen could see opportunities this fall as well.

Signs point to Cody Wilson becoming one of the more highly frequented targets in the country in 2011. How good can a passing attack be when it is focused around one guy? Pretty good, actually. And pretty bad. Of the 20 teams most directly focused on one receiver (see the Fun Stat Nerd Tidbit below), six (Auburn, Oklahoma State, Alabama, Michigan, Oklahoma, South Carolina) finished among the Top 12 in Passing S&P+, while four finished among the Bottom 30 (Bowling Green, Buffalo, Florida Atlantic, Toledo). There is little correlation between the go-to-ness of your go-to guy and the quality of your offense. So fear not, Ryan Radcliff; throw to Cody Wilson, then do it again, then do it again. 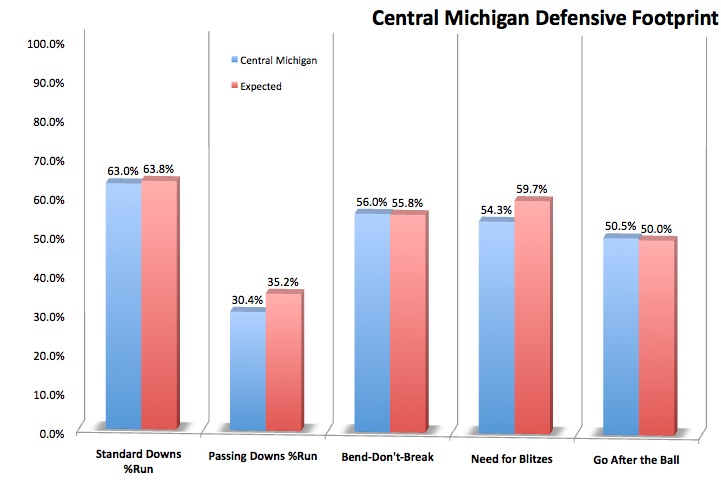 It's amazing what happens to your pass defense when you lose both starting ends and three starting defensive backs. CMU ranked 49th in Passing S&P+ in 2009 (65th in Passing Success Rate+, 43rd in Passing PPP+), but new defensive coordinator Joe Tumpkin found the going a bit tough; there was a bit too much youth and questionable talent, and the Chippewas' pass defense plummeted. (To be sure, their Run D fell too, from 73rd to 92nd, but the tumble was much more precipitous when the forward pass was involved.)

Due to some combination of philosophy and lack of trust in personnel, CMU's pass defense was extremely conservative, offering huge cushions to opposing receivers and basically giving away five or six yards on every play. If they were actually able to leverage opponents into passing downs, they did well -- they got a little more aggressive and a lot more efficient -- but their standard downs defense assured that opponents would not actually see too many passing downs.

CMU will have a lot more experience in 2011, particularly on the line and in the secondary. Whether the experienced players are actually good, we don't know for sure. Perhaps the four best play-makers on the defense -- tackle Sean Murnane, linebackers Matt Berning and Nick Bellore, and cornerback Vince Agnew -- are all gone. They are basically the only ones gone, but that is a rather hefty loss.

The top four ends -- Joe Kinville (4.0 TFL/sacks), Darryll Stinson (3.5), Caesar Rodriguez (3.0) and Kashawn Fraser (2.0) -- return (well, Fraser might return); they will be counted on to generate much more of the play-making than they proved capable of last year, and we'll see if they come through. If they do, and the pass rush doesn't tail off too much (last year it was better than the pass defense as a whole, but a lot of the pressure came from the tackle and linebacker positions), then an experienced -- and potentially more aggressive -- secondary could benefit.

"Back to the Middle," India.Arie. And yes, I owned, and loved, that first India.Arie album. I am not ashamed.

I'm pretty sure I've already done a nerd tidbit similar to this, but... 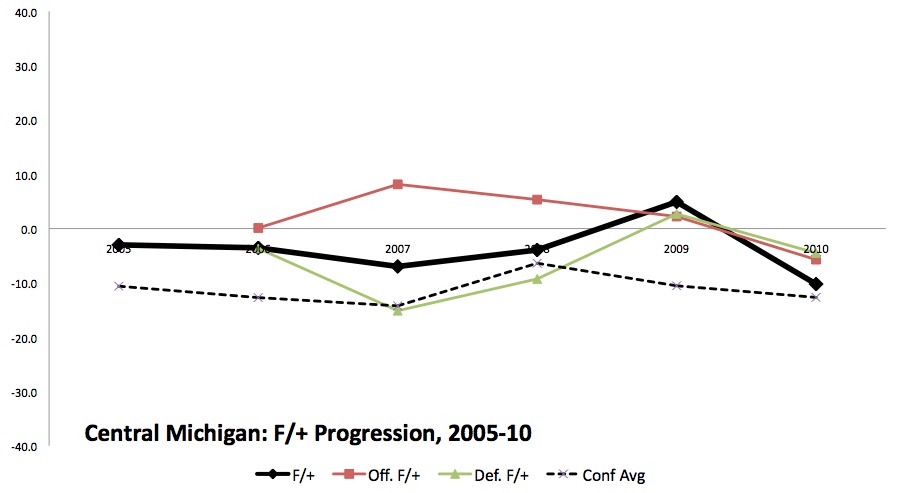 You can rise and fall quickly in the socialist utopia known as the Mid-American Conference, and honestly, Central Michigan has as much of a chance to rise as anybody else in a wide open MAC West. Northern Illinois should regress, and while both Western Michigan and Toledo should be solid, they are not likely to run away with the division. Central should find themselves right in the mix for the division crown, especially with home games against NIU and Toledo.

There is little standard deviation in recruiting rankings among MAC teams -- 11 of 13 teams rank between 86th and 112th in five-year recruiting average (only No. 68 Toledo and No. 120 Buffalo stray from that pack) -- and CMU did not derive much of an advantage in this regard while they were winning. They won because of individual breakthrough players, and they have to hope that guys like Radcliff and Wilson indeed break through in 2011. They'll have solid lines and decent backfields, and the experience level as a whole should be better, but whether they win their fourth MAC title in six years or finish 4-8 again will depend as much on a few key individuals as anything else.