A fun conversation from last Friday:

Behind a paywall, but those who have Insider and who also read my Pryor column will see why I agree with @JayBilas here. http://es.pn/lObe60less than a minute ago via TweetDeck

Bilas boiled down: Just because "most of America" would appreciate a scholly doesn't mean people with high market values shouldn't get more.less than a minute ago via TweetDeck

@Andy_Staples One problem with Bilas' argument: if you get paid for selling your likeness the fight over jersey sales will be incredible.less than a minute ago via TweetDeck

@FO_College If the market demanded more of one player's jersey, the jersey would get sold.less than a minute ago via TweetDeck

@Andy_Staples Most schools only pick an athlete or two to push on the jersey sales. There would be fits thrown by those not chosen.less than a minute ago via TweetDeck

@FO_College Then maybe they should play better.less than a minute ago via TweetDeck

@Andy_Staples And what if they think they already play better than who got chosen? :-)less than a minute ago via TweetDeck

@Andy_Staples Of course, schools would just choose not to sell anybody's jersey then, I guess...or else risk killer chemistry problems.less than a minute ago via TweetDeck

@FO_College @andy_staples Like Texas a&m..they just sell number 12 for 12th manless than a minute ago via Twitter for iPhone

@FO_College No. The schools would sell the jerseys people wanted to buy.less than a minute ago via TweetDeck

@Andy_Staples But how do they know which ones to sell? Create 30 options and make more when one sells out?less than a minute ago via TweetDeck

@FO_College When they play games and people's names get mentioned, some are cheered at higher volume. Those guys.less than a minute ago via TweetDeck

@FO_College It's actually really easy in hoops, b/c you can gauge by pregame intros.less than a minute ago via TweetDeck

@Andy_Staples Oh man...so many fits to be thrown by so many players...less than a minute ago via TweetDeck

@FO_College No doubt. But they throw fits over who gets a new pair of receiver gloves.less than a minute ago via TweetDeck

@Andy_Staples No money involved with receiver gloves.less than a minute ago via TweetDeck

@Andy_Staples But hey, good for parity: why choose Michigan when you can make more money selling more jerseys as big fish at EMU?less than a minute ago via TweetDeck

@FO_College Now you're thinking Adam Smith.less than a minute ago via TweetDeck

@Champ1192 @andy_staples But the 15th-best player might not, and he still might be the best at EMU.less than a minute ago via TweetDeck

So, by giving 18-22 year old an alarming amount of control over their lives as college students and the money they make (and the people from whom they take "business" advice), we figured out a way to accidentally end up with parity. Yay? 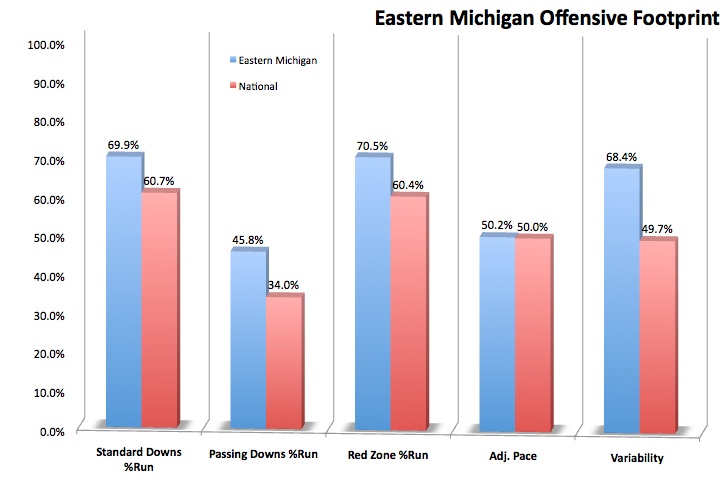 When you've been down for as long as Eastern Michigan has, you find progress wherever you can. In 2010, EMU fielded what was easily their best offense of the last six seasons (i.e. the play-by-play era). Their Off. F/+ rating of minus-1.5% ranked 70th (only once had they finished above 88th). They had a clear identity -- run first, run second, go long third -- and while the ups and downs were significant, they appear committed to a specific style of play, and that can only help at an underdog school like EMU.

Offensive coordinator Ken Karcher found some lovely rushing options in quarterback Alex Gillett (919 pre-sack rushing yards, +4.2 Adj. POE, 5 TD; 1,633 passing yards, 7.1 per pass, 56% completion rate, 13 TD, 13 INT) and running backs Dwayne Priest (716 yards, 4.3 per carry, -1.2 Adj. POE, 8 touchdowns) and Javonti Greene (277 yards, 5.5 per carry, +3.6 Adj. POE, 2 TD). Gillett and Greene return for 2011, along with four linemen with starting experience. On a per-carry basis, Greene was more impressive than Priest, and though his numbers might regress a bit as the primary option, there is still reason to believe that EMU's decent run game might get even better in 2011.

The run game was just effective enough (relatively speaking) to open up the deep ball. EMU's two leading receivers -- Kinsman Thomas (473 yards, 18.2 per catch, 54% catch rate, 4 TD) and Donald Scott (199 yards, 16.6 per catch, 60% catch, 2 TD) both averaged at least 9.9 yards per target, which suggests that a) they were pretty good, and b) they were pretty good at the long gainers. Possession options Ben Thayer, Tyrone Burke and tight end Josh Leduc are all gone now, but possession guys are easier to find than big-play types. If Thomas and Scott can maintain some viability in the passing game while seeing more targets, then the potential for this offense is rather impressive. 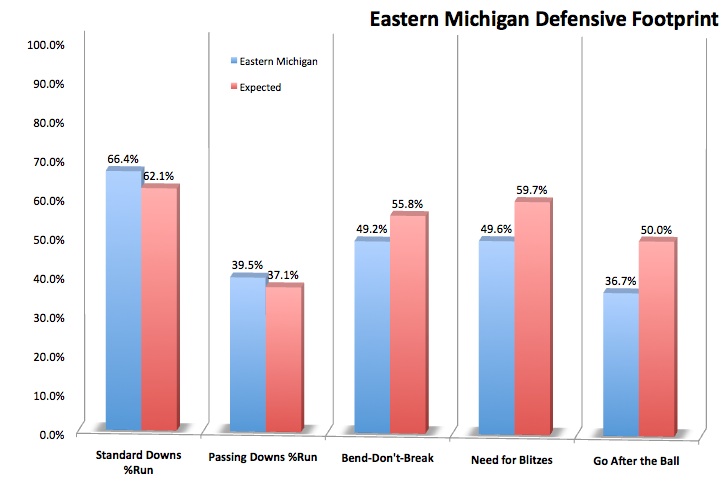 It isn't hard to find optimism in talking about the Eastern Michigan offense. The defense, on the other hand? Good luck.

Actually, good luck in figuring out what to say at all. To finish last in Def. S&P+, you almost literally have to have been good at nothing. EMU was worst in the country against the pass and on standard downs, and they were second worst on passing downs and in the red zone. Their ability to make teams inefficient was slightly less awful than their ability to stop big plays. This was a bad, bad defense.

How bad? To quote Paul Myerberg...

Let’s be honest: the defense won’t be good in 2011. Even if it the defense knocks off a touchdown per game off its scoring average, for example – and that’s a huge decline – the Eagles would still finish 111th in scoring, if last season’s national results held. So there’s room for improvement but only so far forward this group can go, year three under English or otherwise.

In fact, instead of going with the tried-and-true, "a few paragraphs followed by a couple of extra tidbits" method here, I'll instead just focus on trying to give you five reasons why EMU might not have the single worst defense in the country this fall.

1. They don't really have to replace anybody of any consequence. Granted, that's only because you really can't have anybody of consequence on the worst defense in the country (linebacker Neal Howey and his 69.5 tackles and 7.0 TFL/sacks were pretty good). They must replace four starters, but as far as I can tell, the backups are really about the same.

2. Cornerback Marcell Rose (46.0 tackles, 1 INT, 2 FR, 6 PBU) might be pretty good. And they've had some luck with occasionally being aggressive with their strong safeties. Martavius Caldwell and Willie Williams each had more tackles for loss (4.0) than all but one returning lineman (end Javon Reese, with 4.5). If EMU is scoring more points and doing so earlier, and if, therefore, EMU is occasionally playing with a lead, then the aggression might begin to pay off a bit.

3. Continuity can't be any worse. Of EMU's top 17 defensive players, six missed at least three games. It's one thing to be lacking talent, but if the chemistry stinks because the lineups are all shuffled around, that's not going to help.

4. In the last six years, no team has finished last in Def. S&P+ two straight seasons. So ... hooray!

Did I say five? How about four? Good? Good. Because I can't come up with a fifth.

In honor of the Big Man, I'm going with Springsteen's "The Promised Land."  Because "I've done my best to live the right way/I get up every morning and go to work each day/But your eyes go blind and your blood runs cold/Sometimes I feel so weak I just want to explode" sounds like it could have been written by an EMU fan.

I was going to figure out some "bad teams" tidbit here, but instead I'll just point out this: the last time Eastern Michigan finished with a winning record, their starting quarterback was an all-conference sophomore by the name of Charlie Batch. Yes, 64-year old Charlie Batch. It was 1995, back when Eagles were Hurons (the Hurons-to-Eagles switch came in 1991, so strike this part) and, apparently, uniforms were in black and white. 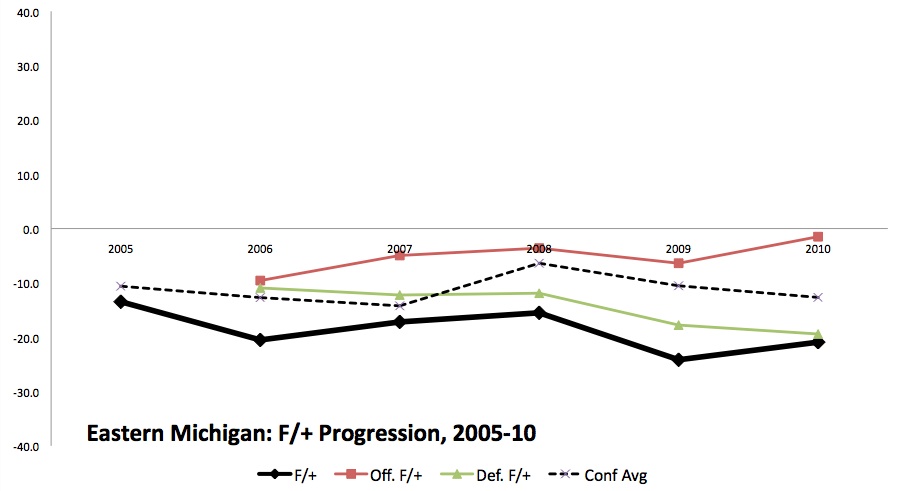 First, the good news: in Howard, Alabama State, Akron, Western Michigan, Ball State and Buffalo, EMU has perhaps the easiest home slate of six games in the country. An average team would potentially sweep to 6-0 with that schedule. EMU is not an average team, but even they should be able to go at least 3-3, therefore winning more games in 2011 than they did in 2009-10 combined.

More good news: their YPP margin shows that, in addition to having less talent and athleticism than their opponents, they also had less luck. Just by means of regression (progression?) toward the mean, EMU should get a few more bounces and turn a few more yards into actual points.

Even more good news: there's nowhere to go but up here. Skydiving Ron English has had almost no success whatsoever in his first two years, but this job has been, in recent decades, a coaching graveyard. They have been the second-worst team in the country over the last five years, and English has only been there for two years. The offense took legitimate steps forward, and while the Eagles probably won't contend for bowl eligibility by any means, there is just enough to like here to assume that they'll get to three or four wins, demonstrable progress, in English's third season.

And even more good news: accidental parity is on the way!