Share All sharing options for: Summer Vacation: The Ohio Bobcats And Negative Positivity

Frank Solich has gotten Ohio U. into the doorway. Before Solich took over in 2005, the Bobcats had managed three winning seasons in 23 years and been to two bowl games (losses in the 1962 Sun Bowl and 1968 Tangerine Bowl). No Ohio coach had left Athens with a winning record since local legend Bill Hess retired in 1977. With Solich in charge, Ohio has gone 40-36 in six years and appeared in three bowls and two conference title games. And lost them all ... by an average of 16 points.

As he was at Nebraska, Solich has been something of a disappointingly good coach. His teams win at a solid level -- and at Ohio, nobody in the last 35 years has won at a higher rate --  but they never make it quite as far as it seems they could, and when they lose, they often lose big. Of Solich's 36 losses in The Other Other Athens, 15 have been by 17 points or more. (Granted, six came in Solich's 4-7 debut season, but three more came this past season.) When it doesn't work, it doesn't work, and on the biggest stages Ohio has experienced in recent years, it hasn't worked.

But is that really a problem? Ohio is actually playing in some pretty big (for the MAC) games. And if you keep playing in them, you eventually win them, right? Maybe?

For six weeks, Ohio had one of the best offenses in the country. From October 9 to November 16, the Bobcats averaged 36.7 Adj. PPG, which for a full season would have placed them 11th in the country, fourth among mid-majors (behind the usual suspects: Boise State, Nevada and TCU). In all six of those games, they came away with an Adj. Win, meaning they would have beaten a perfectly average team all six week despite a less than impressive defense. It didn't last, of course; they couldn't get anything going against a strong Kent State defense, and they couldn't keep up with Troy State.

Despite the poor performances that sandwiched a wonderful hot streak, Ohio showed a strong level of overall athleticism on offense. Now they just need to figure out how to build the defense back up. 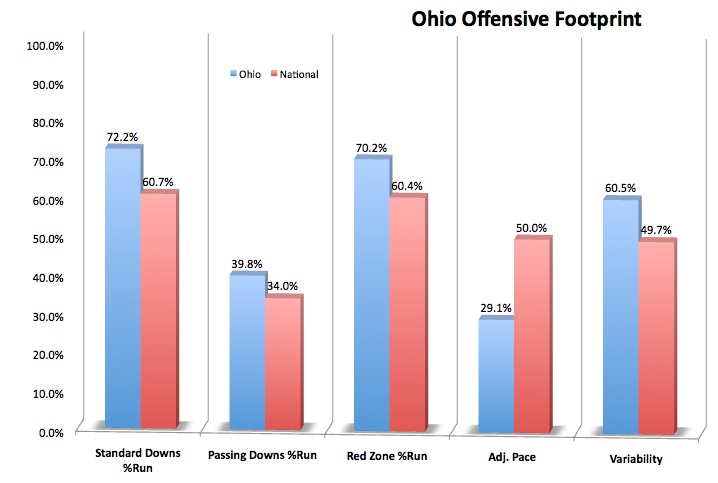 By the end of his career, quarterback-slash-athlete Phil Bates will have racked up an interesting stat line. Here's what he's looking at so far:

As a passer, Bates ... leaves something to be desired. The senior has a career completion percentage of 43% and more interceptions than touchdowns. But as a runner, he has shown extreme potential. He has averaged 6.7 yards per carry (great) and 6.7 yards per pass (less than great). With Boo Jackson finishing up his eligibility, Bates has worked his way into the discussion for the starting gig this fall, but with the potential emergence of sophomore quarterback Tyler Tettleton this spring, people have been predicting a position change for Bates (who missed most of the spring to injury) instead. (Multiple youngsters could emerge as well, including redshirt freshman Kyle Snyder; this would further complicate the situation.) It hasn't actually happened yet, however, so it's almost as if you have to preview two different Ohio offenses.

If Bates is Ohio's starting quarterback, expect the run-pass ratios to skew even more in favor of the run. Bates was very effective in this regard, and in Donte Harden and sophomore Ryan Boykin (combined: 457 yards, 5.0 per carry, +1.5 Adj. POE, 6 TD), he has a nice running backs tandem with which to work.

If Tettleton is the starter, however, then the run-pass ratios should shift back toward the national averages. Bates would, in theory, join what would become a deep receiving corps alongside Riley Dunlop (387 yards, 14.3 per catch, 77% catch rate, an impressive 11.1 yards per target) and Jordan Thompson (204 yards, 9.7 per catch, 72% catch rate). Despite the losses of their starting quarterback, starting running back (Vince Davidson) and two leading receivers (Terrence McCrae and Steven Goulet), it does appear that Solich has a strong set of skill position options. But the offense's personality will depend on which direction he goes with the quarterback position (and which direction Bates is willing to go, I guess). 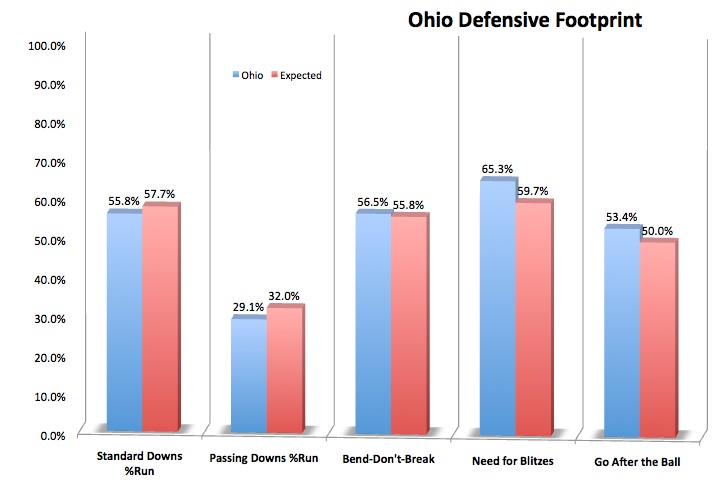 It's interesting how much can change in a year. In 2009, Ohio's offense ranked 104th in Off. F/+, but they finished 9-5 thanks to a defense that ranked a mighty 31st in Def. F/+. The Bobcats ranked in the Top 50 in both Def. Success Rate+ and Def. PPP+, and in the Top 40 in both Standard Downs S&P+ and Passing Downs S&P+. They were extraordinarily well-rounded and solid.

Then 2010 happened. Ohio lost five starters, including all-conference linebacker Lee Renfro, but the more damaging attrition took place after the season started. Middle linebacker Noah Keller (109.5 tackles, 9.0 TFL/sacks, 2 FF, 3 PBU in 2009) got dinged up and only played three games. Outstanding young free safety Gerald Moore (50.0 tackles, 6 INT as a freshman in 2009) missed the entire year. Suddenly Ohio was replacing eight starters, including possibly their three best players. Funny how much that can make a difference, eh?

"October Is Eternal," by Of Montreal. Now ... I have no idea how Of Montreal is on my iPod -- must have ended up there via large file exchange with a friend whim purchase -- but unfortunately for Ohio, October was not, after all, eternal.

Okay, so this tidbit isn't so much a nerd tidbit as one of courtesy. In pulling these profiles together, I typically end up scrolling through a team's weekly game notes from last year. (To the teams who either do not have last year's game notes available, or at least easy to find, I am not a fan of yours.) Well, Ohio's game notes last year featured an entertaining (to me) request:

The "thank you" at the end might be my favorite part. 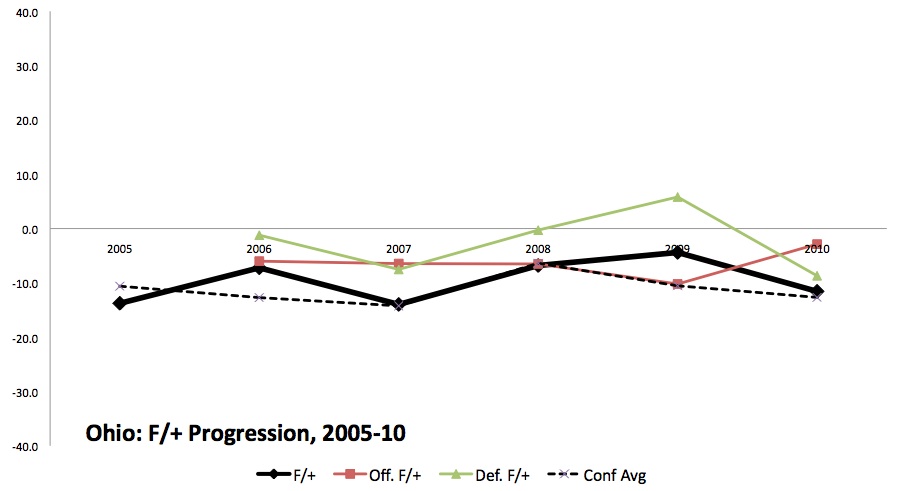 Ohio U. Ohio probably wasn't as good as their eight wins suggest last year, but while their YPP margin suggests some luck was involved, their negative fumbles luck -- and a couple of devastating injuries -- probably balance that out. The MAC East race could be a highly entertaining one this year, and Ohio should be right in the thick of the hunt, along with Temple, Miami and maybe Kent State. (Everybody but Buffalo and Akron, basically.)

The Ohio offense is a complete question mark right now, but no matter which direction the quarterback race goes, there are enough athletes to make the machine run rather well. Whether Ohio wins the East or not could simply come down to how the defense rebounds from a year of serious regression and injury. For what it's worth, the schedule sets up nicely -- Temple, Miami and Kent State all, amazingly, come to Athens this fall, and aside from maybe the trip to Rutgers, there isn't a single unwinnable game on the slate.

Even with a team that ranked just 91st, Ohio managed eight wins last year. With a friendly schedule and a better defense, they should be able to match that. And if they can sneak into the 70s range, then double-digit wins are certainly possible. Ohio could be playing some more high-visibility games in November and December this year -- is this the year the Bobcats break through and win them?