Part of what makes this preview series fascinating for me (and thank god something does, otherwise what's the point...) is the sense of discovery. Without any writing or numbers whatsoever, I would still be something much more than a casual fan (after all, I didn't commit to blogging or pursue football numbers until 2007), but even obsessing over this silly sport at all times, you still miss things. This series is forcing me to live life as a fan of each school at the FBS level and discover things I'd have never fully realized about teams I didn't see on TV four times last year.

This is a long way of saying that Kent State had a damn solid defense last year. That's an odd thing to say about a team that went 5-7, finished three games out in the MAC East race, allowed 45 points to Army, and watched their head coach resign after seven years without a winning season, but hear me out. This is a defense that...

a) ...featured a defensive end (Roosevelt Nix) who posted a ridiculous stat line (31.0 tackles, 20.0 TFL/sacks, 4 FF, 2 PBU) and won MAC Defensive Player of the Year as a true freshman;

b) ...had five other players who registered at least seven tackles for loss and sacked opposing quarterbacks 35 times; and...

c) ...had to pick up the slack for one of the worst FBS offenses in the country, one that committed 27 turnovers and played at an average-or-better level just twice all season.

In all, Kent State ranked 49th in Def. F/+ last year, sixth-best of all mid-major teams. Roosevelt Nix is absolutely a name to remember, but he has company, especially on an impressive defensive line. Whether the Golden Flashes can account for a new coaching staff, losses at linebacker, and an offense that probably isn't going to be significantly better, we will see. But there are reasons to be interested in Kent State, whether they're ever truly good again or not, and that's something I wouldn't have known to say a couple of hours ago.

Kent State came across its solid defensive ratings by playing at a consistently average level and exploding for a couple of perfect performances. Considering 27.1 Adj. PPG as the national average, the Golden Flashes' defense played within five points of average in six games, within eight points in three others ... and completely wiped the floor with Bowling Green and Ohio. And before we use that as proof that they did not 'earn' their ratings because they dominated a couple of inferior opponents, realize again that these numbers are opponent-adjusted, meaning even if an opponent was weak, you can still earn good ratings by dominating them at a much higher level than anybody else. That's what Kent State did with Bowling Green (who scored 21 points on Michigan, 21 on MAC champ Miami, and 27 on Troy) and Ohio (who scored 30+ points eight times).

If only the offense could have produced. Kent's O improved ever-so-slightly as the season progressed (though that could have just been home field advantage), and they do return their quarterback, running back, top two receiving options and four linemen, but the turnovers hurt, and even the "improved" offense left something to be desired.

Despite the offense, KSU was holding it together at 4-4 before a three game losing streak eliminated them from division contention and clinched a ninth straight year without a winning record. That was enough to force Martin's resignation.

Now aboard: Darrell Hazell. Like Miami coach Don Treadwell, Hazell has Jim Tressel ties (he spent the last seven years on the Ohio State staff; again, that was much more impressive a while ago than it is now), MAC ties (he spent a couple of years at Western Michigan) and further Ohio ties (he went to school at something called Muskingum in New Concord and coached for five years at Oberlin) ... plus, he's got 25 years of experience overall. He doesn't rank quite as high for me as Miami's Don Treadwell, simply because he's spent much of his career as a position coach instead of a coordinator, but he's got a great resume for a mid-major Ohio school to pursue. 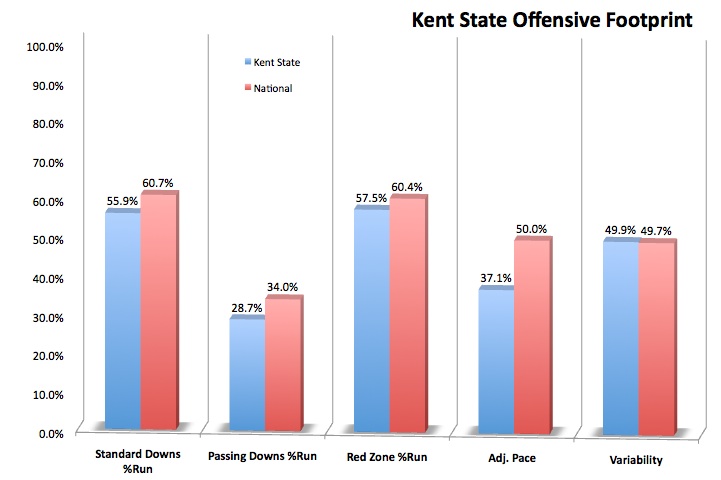 Doug Martin's coaching tenure matched that of Eugene Jarvis' as Kent State running back -- hints of hope shadowed by injury and disappointment. Jarvis was a sixth-year senior in 2010 and managed to play in parts of just six games in his final two seasons after teasing over his first three years (from 2006-08: 3,265 yards, -3.4 Adj. POE). In the end, Kent's offense was really no better when he played and when he didn't in 2010, but he officially hands the reins over to senior Jacquise Terry in 2011. Terry has racked up 1,191 yards (+9.4 Adj. POE) over the last two years, and depending on how much Tressel Ball is in Hazell's bloodstream, he could see a hefty load of carries this fall.

Relatively speaking, the run game was a strength last year despite Terry posting a below-average Adj. POE and the line failing to do too good a job from an Adj. Line Yards perspective. The Golden Flashes should see at least minor improvement in this regard, which can't hurt quarterback Spencer Keith and the passing game. Keith was able to evade the pass rush and occasionally help himself with the run (149 pre-sack rushing yards), but there was not much to love about the receiving corps. Keith's top two targets -- Tyshon Goode (743 yards, 12.6 per catch, 62% catch rate) and Sam Kirkland (589 yards, 10.7 per catch, 57% catch rate) -- return, though if somebody wanted to challenge Kirkland for No. 2 status, that might not be a bad thing. Goode is a keeper, but with a 57% catch rate, Kirkland should have averaged more than 10.7 yards per catch. 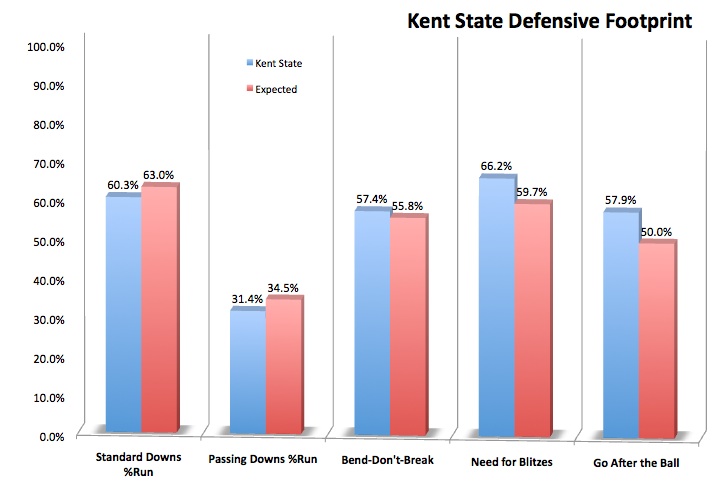 If Miami didn't have the best defensive line in the MAC, Kent State did. They allowed the fewest Adj. Line Yards in the country, and though the defense struggled a bit if a play got past the line, run defense was still an overall strength, and opponents knew it. On both standard and passing downs, opponents passed on Kent State more than the national average; this despite the fact that half of Kent State's games ended in a double-digit loss.

There is still quite a bit to like about the defensive line, even though they must replace two key contributors in end Monte' Simmons (28.5 tackles, 10.0 TFL/sacks in nine games) and tackle Quinton Rainey (15.0 tackles, 7.0 TFL/sacks, 3 FR). It all starts, of course, with Roosevelt Nix. His 20.0 tackles for loss placed him 10th in the country, second-best among mid-major defenders. He was easily the most successful freshman in the country in this regard (next best: Tulsa's Shawn Jackson at 15.5), and only one of the players ranked above him was even a sophomore (Florida State's Brandon Jenkins). Despite being undersized (6-foot-0, 240 pounds) and under-recruited (other offers: Air Force, Ball State, Eastern Michigan), Nix thrived less than 12 months after his senior prom.

Nix has some help up front -- ends Lee Stalker and Jake Dooley (combined: 46.5 tackles, 13.0 TFL/sacks, 4 PBU) were either nice complements to Nix or beneficiaries of distracted offensive lines, while tackles Dana Brown and Ishmaa'ily Kitchen (combined: 37.0 tackles, 8.0 TFL/sacks) should be able to account for the loss of Rainey. One has to figure the line does not quite thrive as much in 2011, simply because it was so good in 2010, and it is now under the control of a completely new coaching staff, but it will still be a strength and easily one of the best in the MAC.

Because the Golden Flashes last went to a bowl game in 1972...

Best Songs From 1972
"Funky Music Sho Nuff Turns Me On," by The Temptations
"Honky Tonk," by Miles Davis
"I Call My Baby Pussycat," by Funkadelic
"Little Child Runnin' Wild," by Curtis Mayfield
"Mona Lisas & Mad Hatters," by Elton John
"The Needle & The Damage Done," by Neil Young
"One One Cocoa," by Gregory Isaacs
"Spirit In The Night," Bruce Springsteen
"Superstition," by Stevie Wonder
"Tumbling Dice," by The Rolling Stones

I limited myself to one song per artist, otherwise I'd have created the entire list from Exile On Main St., Talking Book, Superfly and America Eats Its Young.

Oddly, only four of the teams on this list finished with winning records. Apparently offense is what sets you apart in the MAC, and most MAC teams don't have it. 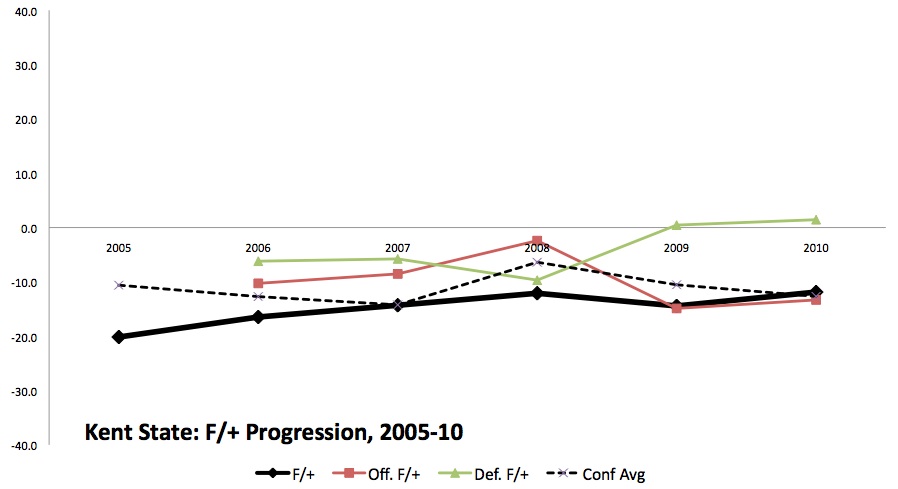 Kent State rose from horrendous to just below average in Martin's tenure, but that's not exactly inspiring improvement. Regardless, their recruiting averages aren't terrible for a MAC team, and their YPP margin should improve a bit. Throw in an improved offense that could offset some regression on defense, and you've got ... well, you've got a team right around the quality of last year's.

When Miami (Ohio) surged forward in 2010, they didn't do it by actually improving that much; they did it by taking better advantage of their opportunities. They ranked 90th and went 10-4 while Kent ranked 93rd and went 5-7. If the Golden Flashes can keep things tight and close out better (often a Tressell Ball specialty), then they could very easily compete for the division title. But that might be a lot to ask for a team bereft of recent success and breaking in a new staff. Give them a year, then look out. Nix is but a sophomore, and perhaps the next-best player, receiver Tyshon Goode, is a junior. The foundation is reasonably solid, but it might take a year for everything to gel.