Share All sharing options for: Summer Vacation: Great Hires And The Miami Redhawks

Considering the summer we've had in college football, Miami (Ohio) got off easy. All they did was lose a coach to a bigger school and replace him with an extremely experienced, ready-for-his-opportunity assistant. No coach-in-waiting drama, no hiring-two-in-one-offseason issues. They just lost a guy and hired the most qualified replacement available. Easy peasy.

Then again, Miami's used to replacing good coaches. They lost Woody Hayes to Ohio State, Ara Parseghian to Northwestern, Bo Schembechler to Michigan, Bill Mallory to Colorado, Dick Crum to North Carolina, Tom Reed to N.C. State, Randy Walker to Northwestern and Terry Hoeppner to Indiana. This is old hat for them. (When I went to a game at Bowling Green in 2002, I was a little thrown by the flags flying in the parking lot. Almost every single person flying a flag had a medium BGSU flag and a large Ohio State flag. Our joke was that MAC teams were basically Triple-A squads for Big Ten programs. When it comes to Miami and coaches, that isn't a joke. The only surprise is that last year's successful Miami coach, Mike Haywood, was called up to a Big East school. Of course, Haywood's tenure in the Big East didn't last too long...)

The "Cradle of Coaches" has made more great hires than bad ones, and in Don Treadwell, they certainly brought in a man with diverse experience and a lengthy resume. Nobody is a guaranteed success, but Treadwell, most recently the offensive coordinator at Michigan State, looks like as safe a bet as anybody.

Without realizing anything about Miami's recent history, one would still look at the Redhawks' season as a rousing success. Miami won the MAC title, scoring an upset over Northern Illinois in the conference title game and winning the GoDaddy.com Bowl to reach ten wins for the first time since Ben Roethlisberger was wearing the red and white in 2003.

That they did this all a season after going 1-11 is just staggering.

Granted, Miami didn't really improve all that much -- they rose from 110th to 92nd in F/+, 109th to 100th in Off. F/+ and a more substantial 90th to 69th in Def. F/+. But after going just 1-2 in close (i.e. within eight points) games in 2009, they went 6-0 in 2010. There is certainly something positive in "learning how to win," though it's probably not altogether sustainable. Still, the defensive improvement was particularly impressive. Theirs was the 19th-best mid-major defense in the country, fourth-best in the MAC, and a year after allowing 410 points, that is a remarkable achievement. And much of the improvement came over the last half of the season.

When you return a hefty amount of your talent from the previous season, late momentum is a strong indicator of future success, and UM had it at the end of 2010. 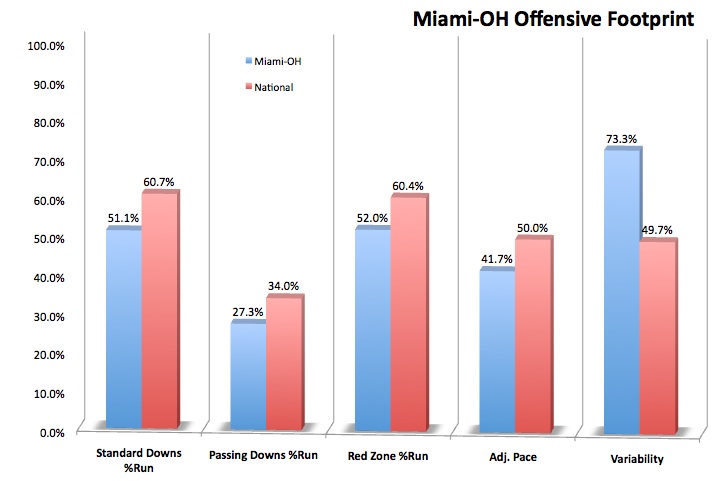 Miami made the plays they had to make in the fourth quarter, but in all this wasn't a particularly great unit. They were relatively efficient, but the big plays were lacking. Miami passed to set up the run, and as they found out through necessity, their backup quarterback was as good as their starter. Starter Zac Dysert (2,406 yards, 7.0/pass, 65% completion, 13 TD, 12 INT) injured his spleen stretching for a touchdown and was replaced by a redshirt freshman, Austin Boucher. All Boucher did was almost directly replicate Dysert's per-play stat line (1,120 yards, 7.2/pass, 64% completion, 6 TD, 3 INT) and come through late in the MAC championship game against Northern Illinois.

As is often the case (when applicable) with coaching changes, however, let's see what we can glean from Don Treadwell's offensive philosophy. Here is Michigan State's offensive footprint from last season. 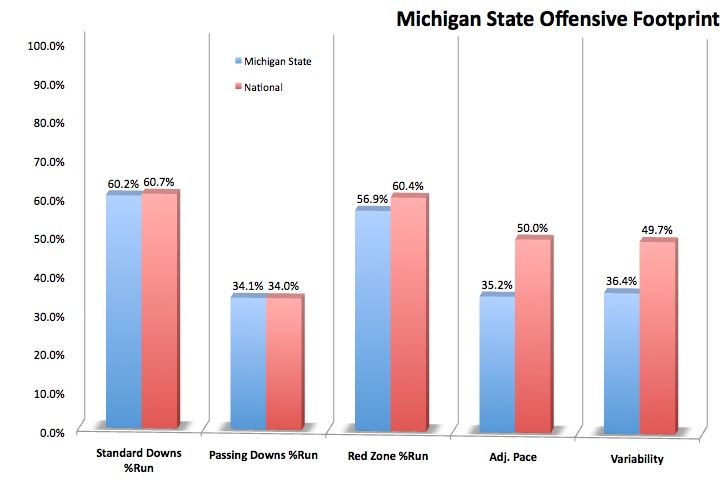 If Miami is going to feature any sort of focus on explosiveness, receiver Nick Harwell could be the key. As a redshirt freshman last year, he was the right-hand man to then-senior possession receiver Armand Robinson (1,062 yards, 11.3 per catch, 72% catch), but he had by far the most explosive potential on the offense. Receivers who catch two-thirds of their targets or more while still averaging over 13.5 yards per reception are relatively rare -- only 18 receivers who were targeted at least 75 times, managed this feat. Still just a sophomore, Harwell has a load of potential.

The main question, of course, is who will be throwing to Harwell. Both Dysert and Boucher acquitted themselves quite well last fall -- Dysert easily had the worse TD-to-INT ratio of the two, but he had zero touchdowns to five interceptions against Pittsburgh and Missouri, and a comparable 13-to-7 against everybody else. It appears the competition will continue this fall. 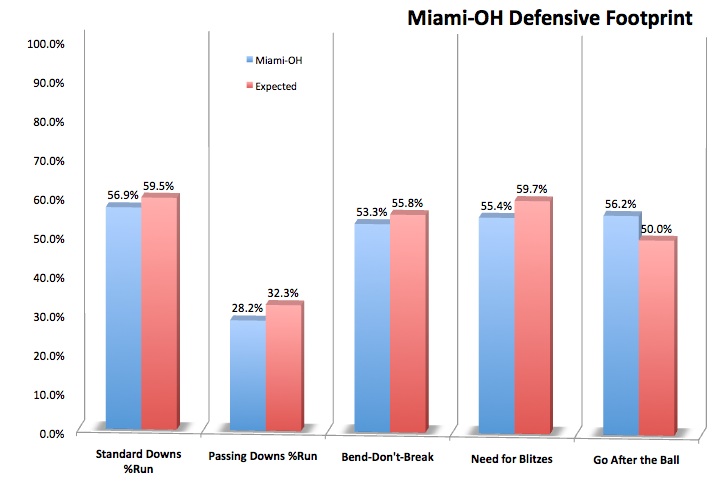 New defensive coordinator Pete Rekstis also has Youngstown State ties, but he spent the last seven seasons in the same coordinator position at Kent State. The Golden Flashes had the sixth-best mid-major defense in the country (and the best in the MAC) last year, ranking 49th overall in Def. F/+.

Rekstis will have some fun toys to play with in Oxford. Miami's front seven was one of the best in the world of mid-majors -- they ranked in the overall Top 25 in both Adj. Line Yards and Adj. Sack Rate, and every major contributor returns. There were playmakers throughout the front seven; they had two linemen who registered at least 10.0 TFL/sacks and four linebackers who registered at least 8.0. It all starts with two players: tackle Austin Brown (40.0 tackles, 10.0 TFL/sacks, 2 FF, 2 PBU) and middle linebacker Jerrell Wedge (69.5 tackles, 15.0 TFL/sacks, 2 FF, 2 FR, 2 PBU).

Kent State's defense ranked higher than Miami's overall because of the secondary. The Golden Flashes prevented big plays rather well, ranking 64th in PPP+; Mizmi, meanwhile, ranked 80th. The run was a particular problem -- if an opposing running back got beyond the front seven (which didn't happen particularly often), he went a long way. Free safety Pat Hinkel (57.5 tackles, 3.0 TFL/sacks, 3 INT, 4 PBU) returns, but he'll need a little more help as the last line of defense this year.

Because of Miami's surge in 2010, how about ten great "rise" songs:

"I'll Rise," by Ben Harper
"Rise," by Josh Rouse
"Rise," by Public Image Ltd.
"Rise Above," by Black Flag
"Rise Up With Fists!!" by Jenny Lewis
"Rising Up," by The Roots
"Sunrise," by Yeasayer
"Tequila Sunrise," by The Eagles
"Time for the Sun to Rise," by North Mississippi Allstars

We'll go with those nine and the entire Rise album by Chris Thomas King.

Good company there for Harwell, and good news for whoever wins the quarterback job. 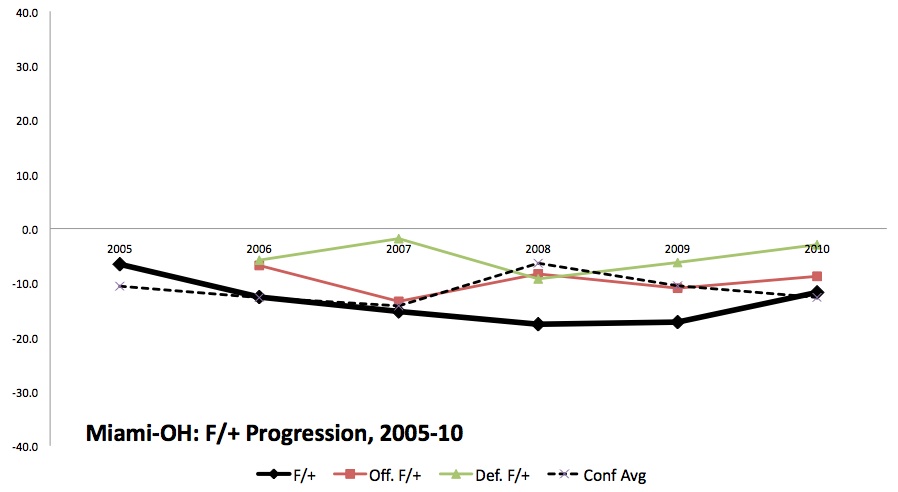 There is quite a bit to like about Miami this year -- an outstanding front seven, two solid quarterbacks, and a potential go-to receiver, to name three. But it is certainly worth reiterating that the Redhawks went 6-0 in close games last year and, from an F/+ perspective, really did not improve as much as their record would indicate. The improvement they did make is likely rather sustainable, but it was still only a step or two forward.

I really, really like Don Treadwell. I like the job he did in a fluid situation at Michigan State last year (head coach Mark D'Antonio suffered a heart attack, and Treadwell served as interim coach, beating Wisconsin in the process), and I think he could be capable of very good things in Oxford (and, therefore, the major conference job that he would naturally inherit in a few years). They are by no means a runaway favorite in the MAC, but they'll have a very good chance to defend their East Division crown. Our initial projections suggest an impressive four-way race between Miami, Temple, Ohio and Kent State, and that sounds about right to me.