When putting together all the profiles for last summer's (hopefully enjoyable) Top 100 College Football Teams of the Last 100 Years countdown (which I considered a success despite the fact that I'm pretty sure somebody called my numbers racist because of the No. 1 pick), I realized something I had sort of realized a long time ago -- damn, was Army good once.  Like, Notre Dame good.  Better, actually, for a number of years.  Like, "three in the all-time Top 10, five in the Top 100" good.  Of course, that was a long time ago.  Fordham was great once, too, and that doesn't have much impact on the present day.

Still, it was enjoyable seeing Army playing well last season.  I'm not a big subscriber to the "College Football is more enjoyable when (Random Old Power) is good again" theory (as a Mizzou fan, I've revolted against that line of thought regarding Nebraska for years and years), but I do enjoy redemption tales, and I do enjoy when teams prove that you can win with different styles of football.  Under Rich Ellerson, Army has thrown themselves into the "flexbone, 3-4 defense, underdog strategies galore" approach that Navy and Air Force have successfully utilized for a while now, and ... well, it worked in 2010.  The Cadets made their first bowl since 1996 and only their second since 1988.  They overcame a lack of athleticism with efficiency and execution, they whipped Duke, they almost upset Rutgers, they knocked of SMU in the Armed Forces Bowl ... what more is there to say?  They had a really good season.  To have another one in 2011, they'll have to work out the kinks with quite a bit of key, new personnel. 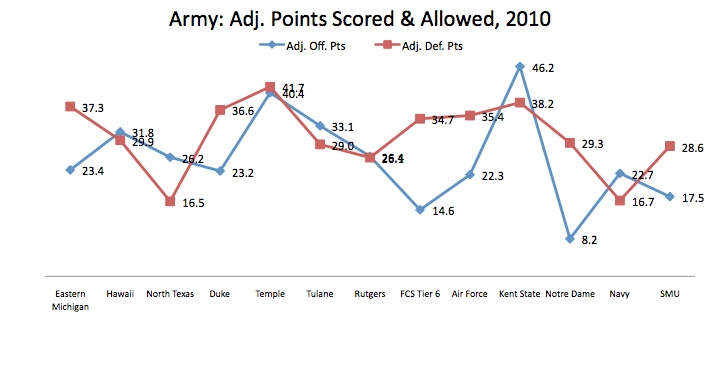 Perhaps the most interesting thing about Army's 2010 season is that it could have been much better.  With iffy overall ratings and the underdog approach, it's easy to assume they must have won quite a few two-point games to get to 7-6.  Actually, the Cadets went only 2-3 in one-possession games; with a little luck, they could have ended up around 9-4 or so.  (Of course, an incredibly easy schedule obviously helps in this regard.) 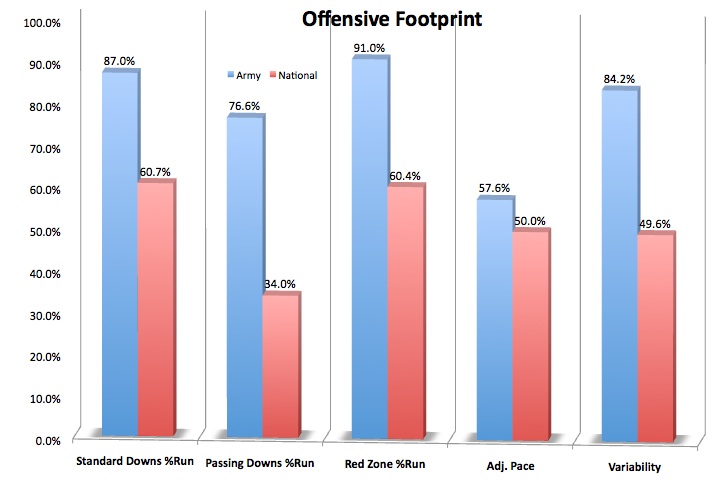 No team was more married to the run than Army in 2010.  Punishing, 235-pound fullback Jared Hassin (1,013 yards, 5.3 per carry, -1.6 Adj. POE, 9 touchdowns; 154 receiving yards) was efficient and exhausting up the middle, a number of slotbacks got their moment in the sun (the best of the bunch: Brian Cobbs and Malcolm Brown combined for 645 yards and +8.8 Adj. POE), and quarterback Trent Steelman proved himself capable of executing Rich Ellerson's triple-option flexbone with precision.  He isn't an amazing runner (721 yards, -8.6 Adj. POE), but his decision-making is a strength. 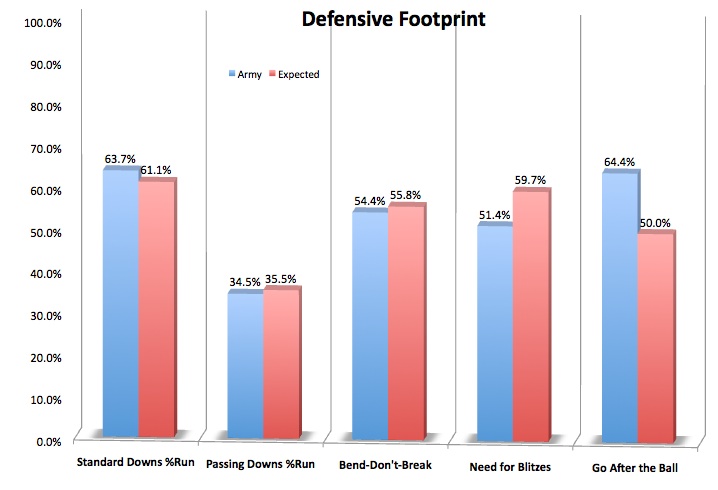 Army calls their defense the Double-Eagle Flex, which, well, is pretty awesome.  What is that in English?  Basically a 3-4.  They have positions like QUICK (two-thirds DE, one-third OLB), BANDIT (we'll say one-third DE, two-thirds OLB), and Rover (half-OLB, half-safety), and as with most well-run 3-4 schemes, they attack from everywhere.  They didn't have enough athleticism to be a truly good defense, but they were certainly deceptive; they racked up 65 tackles for loss, and eight players had at least three each.

Unfortunately, quite a few of the higher achievers are gone.  Middle linebacker Stephen Anderson has as good a line as you could ask for from an inside linebacker: 88.0 tackles, 12.0 TFL/sacks, 2 INT, 4 FF, 2 FR, 5 PBU.  He's gone, as are strongside backers Donnie Dixon and Jordan Trimble, who combined for 66.0 tackles and 7.0 TFL/sacks.  Quick end Josh McNary (12.5 TFL/sacks, 3 FF, 3 FR)?  Gone too.  Nose guard Mike Gann (9.0 TFL/sacks)?  Yep, gone.  The system creates a lot of these types of numbers, and as with the offensive line, basically all of these players are getting replaced by upper-classmen, but still ... you can't count on new guys to produce the same number of big plays as the old guys, and without the big plays and tackles for loss, Army turns into a sieve rather quickly.

Pick your favorite "Welcome Back" song.  Mase?  Fine.  Starlite Singers?  Sure.  Young Jeezy?  Whatever.  Me, I'm going with this one.

The run is making a comeback, at least with the service academies and Georgia Tech. 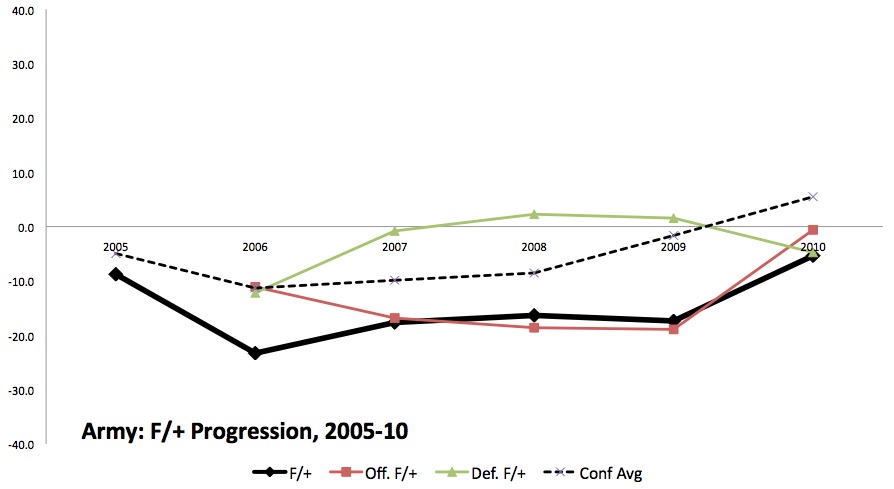 Four returning starters on defense ... a discouraging YPP margin ... a likely unsustainable turnover margin ... I enjoy when the service academies do well (most of the time, at least), but I'll be rather surprised if Army is able to put together six wins again.  The schedule isn't murderous, but it's potentially harder than last year's -- only four true home games (their "home game" against Rutgers is at Yankee Stadium), trips to Northern Illinois, Vanderbilt, Air Force and Temple, and a "never bet against a streak" loss against Navy..

In all, however, the recipe Ellerson is following is a proven winner at service academies, and he certainly put a smart product on the field last season.  If the offensive line gels, the offense could have enough pieces to win despite a holes-plagued defense, but it looks as if Army might be taking a step backwards this season despite a solid overall trajectory.