After a couple of weeks in the bastion of capitalism and royalty known as the BCS conferences, it's time to jump back out to our cottage in socialist MAC country.  We're doubling up on the profiles to catch up a bit.  Confused? Don't miss the definitions and footnotes at the bottom.

The last Akron head coach who ever moved on to lead another Division I team was Joe McMullen, who left Akron in 1960.  There are two types of jobs that end up with tidbits like that: destination jobs and coaching graveyards.  This is mean, of course, but ... Akron's not a destination job.  The school with a higher athletics budget than Troy or Southern Miss just has not been able to figure out how to field a consistently competitive team at the FBS level through the years, and demographics (i.e. the shifting population base) can't explain all of that.  The Zips have certainly had their moments; Charlie Frye brought them a couple of winning seasons in 2003-04, and the immortal Luke Getsy led them to a surprising, exciting MAC title in 2005.  But in the five years since then, Akron won just 18 games, only four of which have come in the last two seasons.  Since advancing to the FBS level in 1987, the Zips have finished with a winning record seven times, played in one bowl game, and won more than seven games in a season exactly zero times.

But hey, their stadium is historic (and has a cool name), and their mascot is phenomenal, so they've got that going for them.

Rob Ianello begins his second year as Akron head coach in 2011, and there's almost nowhere to go but up after an incredibly miserable first season that saw the Zips lose to Gardner Webb (which is a school, not the frat boy antagonist in Van Wilder), score over 22 points just twice, allow fewer than 28 points just twice, and pull out a final-game win over Buffalo to avoid an 0-12 season.  They had exactly one strength -- run defense -- and ranked in the triple digits in almost every single other category we track.  They were bad, bad, bad, and it's hard to know where to start describing the ways in which they need to get better.  But we'll give it a shot.

(Akron dumped McMullen after a 1-9 season, and he wound up at San Jose State for two years after serving on Joe Paterno's staff for almost a decade. The more you know...)

In 2010, Akron was one of five teams who didn't once play well enough to beat a perfectly average team according to Adj. Score.  (The other four: Kansas, Memphis, New Mexico, UL-Lafayette.)

Honestly, I'm not sure what to say beyond that. The offense and defense were equally bad -- only once did the offense produce better than 27.0 Adj. Points in a game (27.5 against Northern Illinois), and only once did the defense allow fewer than 27.0 Adj. Points in a game (23.5 versus Kent State).  Ianello was receivers coach at Notre Dame under Charlie Weis, so in theory, their offense may be more likely to improve than their defense, but that is a reach. On both sides of the ball, though, there is almost nowhere to go but up (he said for the second time in four paragraphs). 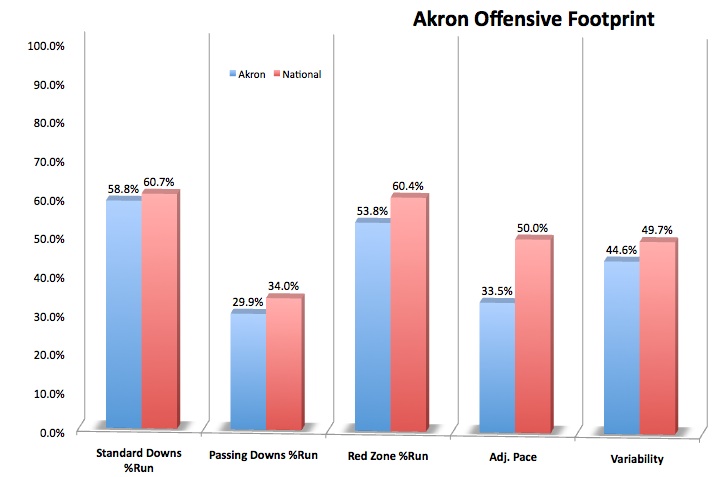 Akron was slightly on the pass-heavy side of run-pass ratios, and while some of that may be explained by the fact that they were playing from behind so often, their lower variability suggest that they intended to pass quite a bit anyway.  Not that this matters, really, as the best thing about their running game is gone.  Running back Alex Allen (877 yards, 4.7 per carry, +0.5 Adj. POE, 8 TD) has escaped Akron, and while he was far from spectacular (he didn't earn any all-conference recognition despite the fact that the MAC honors many, many people) ... well, when you rank in the triple digits in every major category, you take your positives however you can get them.  But both Allen and backup Nate Burney (467 yards, -15.5 Adj. POE ... yuck) are gone.  So unless Ianello's recruiting acumen can pay some immediate dividends, don't expect the running game to be anything onto which the Zips can lean.  Ianello got commits from two three-star running backs in the 2010 recruiting class, but neither (Giorgio Bowers, Erick Howard) are on the roster. 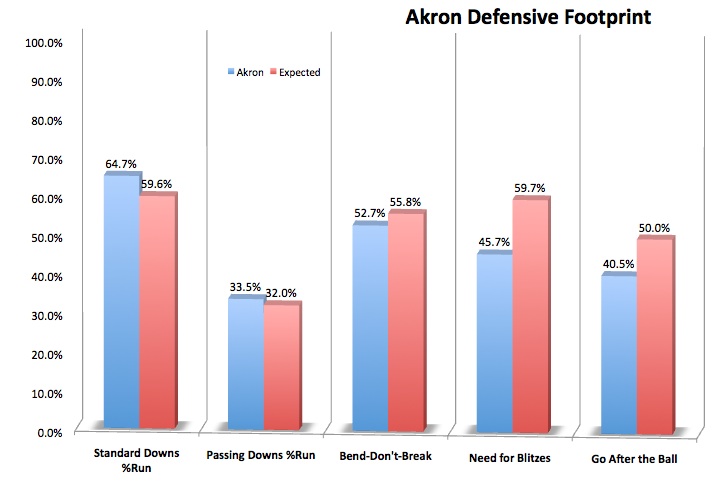 You're Kevin Cosgrove. For years, you were one of the hottest names in defensive coaching. You were Barry Alvarez' defensive coordinator for nearly a decade at Wisconsin, and then you joined Bill Callahan's sure-to-be-great staff at Nebraska.  As recently as about 2006, yours was a highly-respected defensive mind.  Then your 2007 Husker defense completely fell apart and you were fired.  Then you ended up at Minnesota and, after a year of decent results in 2009, your defense once again fell apart in 2010.  Your last two bosses have been fired.  What do you do?  You head down to the MAC for some career rejuvenation ... or at least some anonymity.  Cosgrove takes over the Akron defense in 2011, and ... honestly, this isn't a bad move.  I wouldn't want Cosgrove calling the shots for my BCS conference unit, but his level of expertise is certainly solid for what Ianello is attempting to build.

At both Nebraska and Minnesota, Cosgrove's defenses were aggressive, ranking higher in success rates than PPP+ and putting together stellar standard downs and line rankings.  This might fit well at Akron, where the run defense and linebacking corps were easily the best things the Zips had going for them (other than, again, that awesome mascot).  Gone are end Shawn Lemon (a second-team all-MAC performer ... Akron's only all-MAC performer), and tackle-heavy linebacker Mike Thomas (89.0 tackles, only 3.0 TFL/sacks), but some interesting pieces return.  I'm intrigued by end Hasan Hazime (32.5 tackles, 7.5 TFL/sacks) and tackle Dan Marcoux (33.5 tackles, 3.5 TFL/sacks), and they have another tackling machine in Brian Wagner (97.5 tackles, 3.5 TFL/sacks, 2 INT, 6 PBU).  It's hard to get excited by much on the Akron roster, but the front seven is about as close as you can get.

In honor of the best band to come out of Akron, here are five songs by The Black Keys that are rather relevant to Akron's 2010 season:

"The Desperate Man"
"Grown So Ugly"
"Heavy Soul"
"Strange Times"
"Thickfreakness" (why, I'm not sure)

Here is a little of what to expect from a Kevin Cosgrove defense.

Obviously Akron's defense probably won't rank this highly, but a) this does show that Cosgrove isn't the worst defensive coordinator in the history of creation, and b) this does give you the impression that standard downs and success rates will be relative strengths for the Zips defense in coming seasons. 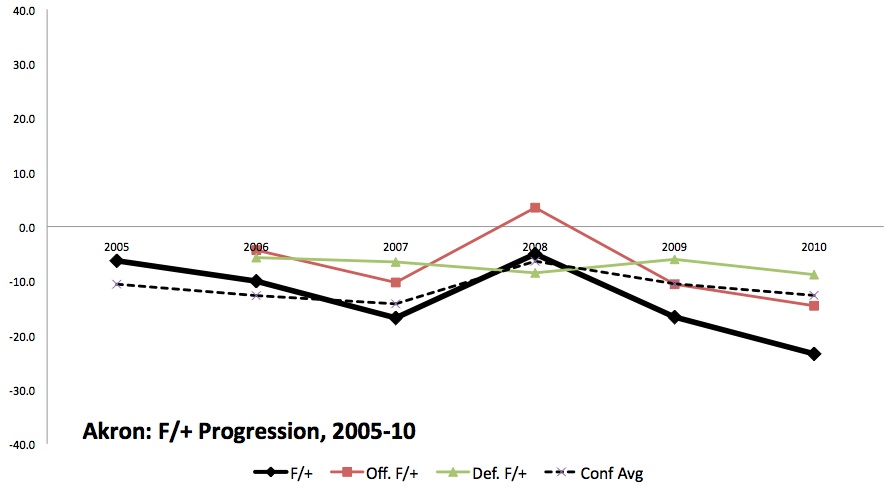 So Akron actually experienced a bit of turnover luck in 2010 -- looking at their fumble recoveries and generally awful defense, things could have been worse in that regard.  Not that we'd have noticed much of a difference on the scoreboard.  The Zips have a few things going for them -- a YPP margin that should turn around at least a bit, a decent front seven, and recruiting rankings that, at the very least, suggest they could be a little better than they have been.  But like other teams that hit rock bottom, the Zips weren't particularly young in 2010, and they will have to do quite a bit more rebuilding, especially at offensive skill positions, in 2011.  That's not good.

Honestly, I think there's hope for the defense; Cosgrove's a decent-not-great defensive coordinator, and he should be able to make something out of the front seven.  But until I see reason to have at least a smidge of hope in the offense, I can't imagine the Zips will have much of a ceiling this fall.  VMI's on the schedule, and they have winnable home games in Central Michigan and Kent State.  Win those, and you've made progress.  Hell, two wins is progress, so let's aim for that.