Share All sharing options for: Coaches, Stats, Turnovers and Turnarounds

Just call it the Summer of Stats.  After the awesome recent work ESPN's Bruce Feldman has done in discussing how college football coaches use statistics, Rivals.com's Tom Dienhart joined the fray a while back with a quotes-heavy article focused around a simple premise:

Every college football fan has heard or read about the most important statistic when it comes to winning games. ... Well, who's right?

Some of the answers were unexpected and, frankly, a bit confusing...

(Not necessarily disagreeing with you, coach, but I'm pretty sure there are better measures of athleticism than kickoff coverage.)

Some were quite accurate...

Louisiana Tech's Sonny Dykes
"When I was at Texas Tech, we didn't care much about penalties and time of possession and turnovers. [Mike] Leach would say that if we didn't have many penalties, we weren't playing aggressively enough. But when it's all said and done, I think explosive plays are what matter the most on offense. And a big deal defensively is holding them to negative plays."

Auburn's Gus Malzahn
"I'm an offensive guy, so for us, being a run-play action team, yards per rush is pretty important to us. When it is up, we are good. When it is down, we aren't as good. We have to be able to run the ball successfully to open up everything else that we do."

While quite a few coaches mentioned third-down efficiency as a key, and a few talked about explosiveness (#swoon), there was one dominant, recurring theme...

Maryland's Randy Edsall
"I think turnover margin is something you can tell what type of a team someone is."

Arizona State's Dennis Erickson "The biggest thing with winning and losing is turnover margin. We lost that last year."

Southern Miss' Larry Fedora
"For me, it's turnover margin and explosive plays."

Northwestern's Pat Fitzgerald
"The tell-tale one for me is turnover ratio."

USC's Lane Kiffin
"When I got the Raiders job, I remember talking to the team about turnover margin."

Washington's Steve Sarkisian
"You look at the teams every year that have double-digit turnover margin, they all are bowl teams and winners, conference champs. ... It's an amazing stat."

Et cetera.  The whole article is fascinating, but you cannot escape the prevalence of turnovers.

Turnovers are an extremely interesting subject for a couple of different reasons: 1) They really do have an extreme impact in the outcome of a given game, and 2) they're pretty random.  And if they're random, then they're relatively uncoachable. As a coach, you can preach the importance of turnovers and "protecting the ball" and "going after the ball," but when the game unfolds, coaching isn't going to do a whole lot.

But how random are turnovers?  For starters, our friend MrPacTen (otherwise known as CFN's Matthew Smith) showed us that over the long-term, certain teams (good ones, for the most part) tend to have a higher baseline for turnover margin than other, worse ones.

Phil Steele has long preached the importance of looking at last year's turnover margin when making projections for this season -- the teams who had extremely high (positive or negative) turnover margins will likely regress to the mean.  This is true.  But as Brian Cook can attest, it's not always true.

…make me want to bang my head against the wall. Of course Michigan would be as large of a chunk of that correlation as possible, and of course they would be on the negative side of things. Thump. Thump. ...

I have tried to make the world make sense and this is what I've come up with:

So while year-to-year correlation is low across college football, if you correct for experience—especially at QB—and maybe lack of prominent walk-ons/converted WRs in the secondary that 12% would be significantly larger. Michigan's program got so messed up that they stopped participating in the circle of turnovers*. Instead they laid at the bottom of the national rankings, a corpse dragged down by redzone interceptions.

Lots going on here, but let's start with some basics.  Here are the correlations between turnovers and the overall quality of offense.

As a whole, turnovers play a larger role in FEI (it ends drives, and FEI is drives-based) than it does in S&P+, so it would make sense that the overall correlations with turnovers are slightly stronger with FEI.  But we do we one pretty clear distinction here: fumbles and fumbles lost are mostly random, but there is a bit more behind interceptions.  We kind of already knew that, but this backs it up.  When we talk about the randomness of turnovers, we're talking about fumbles, not necessarily interceptions. 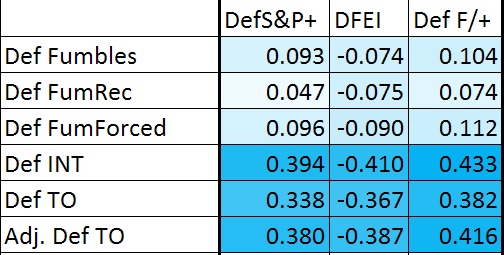 Now we begin to see a clearer picture.  There is a slight correlation between the quality of your offense and the number of interceptions you throw, but there is a much stronger correlation between the quality of your defense and the number of passes you intercept.  When you look back at Matthew Smith's list again, you see quite a few good offensive teams at the top, but you see quite a few really good defensive teams -- Virginia Tech, Oklahoma, Alabama, West Virginia, etc.

So basically, good offenses might still throw some picks, but good defenses almost definitely get some picks of their own.  Considering how awful Michigan's defense was in recent years, it begins to make sense why their turnover numbers still have yet to turn around.  If you're looking for the true turnaround candidates, look for teams who had poor turnover margins and good defense.  Or, going in the other direction, if you're looking for teams likely to fall, look at teams who had good turnover margins and poor defense. Sorry, Army.

To keep things in relatable terms, let's look at which teams were at the top and bottom of the list in terms of the difference between their Turnover Margin rankings and Def. F/+ rankings. Adj. TO Margins have a stronger correlation, but we'll stay basic here.

Army came out of nowhere to become a bowl champion, and Tulsa rebounded from a poor 2009 season, then lost their coach.  Tulsa has experienced more sustained success, but both of these teams will probably see a rather star regression to the mean this year.

This list includes both some "did better in 2010 than they had in a while" teams (Baylor, Kansas State, Miami-OH), and some "jeez, they were still pretty bad with turnover luck" teams (Idaho, UNLV, UTEP, Wyoming).  When looking for pleasant surprises in 2011, don't look toward Moscow, Vegas, El Paso, or Laramie, I guess.

Now on the other side of the equation...

This has to be very good news for potential Top 20 teams like Texas A&M, Nebraska, Notre Dame and Clemson, though teams like Purdue and Buffalo (i.e. teams with horrific offenses in 2010) could be less likely to rebound, since, well, their offenses were horrific, and that does still mean something in regard to turnovers.

As long as Jacory Harris is Miami's quarterback, there's a chance their turnover margin stays in the negative range, but in general, these three teams (two of which went bowling last year anyway) will almost certainly improve in the turnovers category this year, and if they turn around a lot, these are pretty clear Top 20 teams.  If you're looking for a reason to pick West Virginia to win the Big East, here's a bit of support for you.

(Sorry, Michigan.  Your rankings -- 109th in TO Margin, 115th in Def. F/+ -- correlate rather well.  However, your defensive coordinator is no longer Greg Robinson, so expect some turnover turnaround just because of that.)

So let's pull it all together and run some correlations between various turnovers and the overall FO measures: 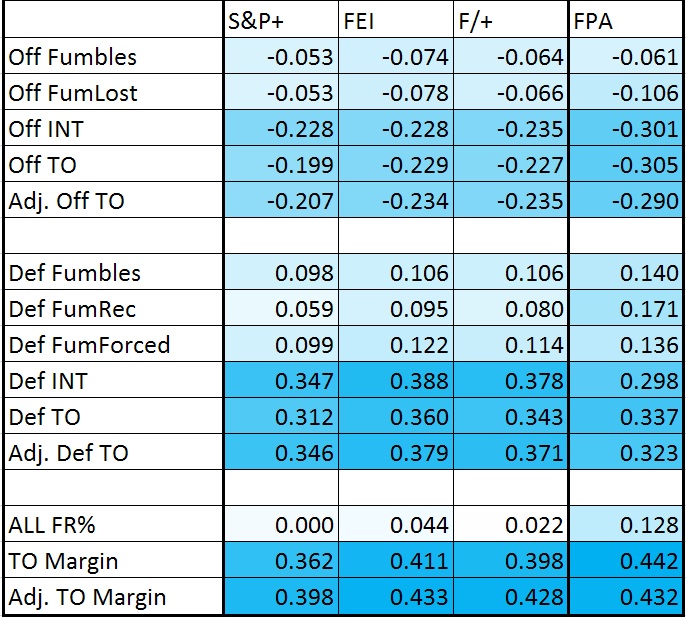 Again, the picture becomes clear.  Good offense results in fewer turnovers, and good defense results in quite a few more takeaways.  The defensive coaches in Dienhart's sample probably had a solid reason to emphasize the importance of turnovers, but really, the takeaway should be that the best way to win the turnover battle ... is to play better.