Temple Football indirectly and unintentionally reaffirmed my love of the Internet.  The 'Net and I have had a love-hate-love relationship through the years.  The man who gave the toast at my wedding?  Met him on the Internet.  The fact that some people actually know who I am and are occasionally interested in what I have to say about football?  Because of the Internet.  Sure, it makes me nuts sometimes ... and sure, it has simultaneously been the best and worst thing to happen to this country in the last two decades ... but as a whole, it's obviously been a net positive.

I know this, but it's nice to get it reaffirmed every now and then.  When I stumbled across Temple Football Forever a couple of years ago?  Major reaffirmation.  Because of the Internet, I live in a world where I am one click away from everything I could want to know about life as a Temple football fan, about reactions to Steve Addazio's hiring ... Villanova's Big East rejection ... hell, about the glories of the 1979 Garden State Bowl.  I know we've had an up-and-down relationship, Internet, but you and I?  I think we've got something.

I so very much loved discovering an outlet for Temple fans because I adore a good redemption story.  And what's more redemptive than watching a program win after such a long struggle that they were dumped from a major conference?  The Pac-10 didn't dump Washington State after the 2009 season.  The Big 8 didn't dump Kansas State in the mid-1980s.  The Big East, however, had no problem dumping the Temple Owls in 2005.  Fourteen seasons in the Big East netted a total of 31 wins.  The high point?  Back-to-back-to-back four-win seasons from 2000 to 2002.  With money and facilities a problem and wins non-existent for the Owls, the Big East said "sayonara."  Temple was an independent in 2005-06 and went a ghastly 1-22, then joined the MAC in 2007 and began to turn things around.  First came their first five-win season in 18 years in 2008, then came their first bowl bid since the aforementioned Garden City Bowl in 2009.  In just five seasons in Philly, Al Golden cleaned off decades of gunk and restored some missing gleam and pride in Temple Football.

Now, after another eight-win season in 2010, Golden is gone, trading in his cherry and white for the orange, green and white of the Miami Hurricanes.  (Perfect hire for Miami, by the way; no coach in the country knows better how to win with iffy money and facilities.)  Into Golden's office steps Steve Addazio.  Granted, opinions on Addazio vary, ahem (to say the least), but the bottom line is simply that, five years ago, Temple wasn't in a position to hire Urban Meyer's right-hand man.  They were lucky to even get Golden, who had previously served as Al Groh's defensive coordinator at Virginia and as Joe Paterno's linebackers coach at Penn State.  (I guess the "at Penn State" part was superfluous, huh?)  Whether Addazio was the right hire, of course, remains to be seen.  But he's a hire they could not have made that long ago, and they have Golden to thank for that.

And for what it's worth, TFF seems rather high on Addazio at the moment.  So he's got that going for him. 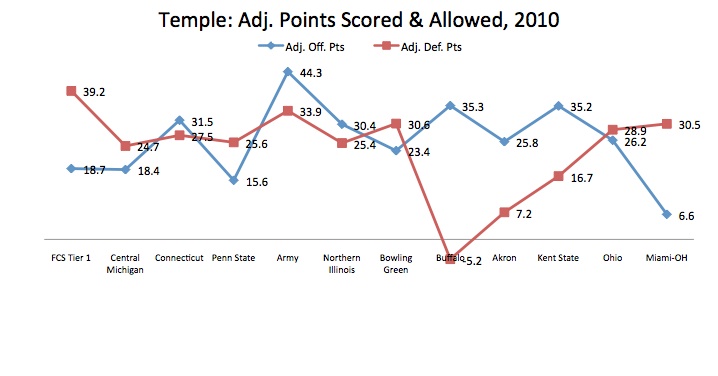 From the years of 2002-2008, Temple won 17 games.  From 1991-99, they won 15.  So even though 2010 was almost seen as disappointing -- 'only' eight wins, no MAC title, and somehow no bowl bid -- the fact that they have now won a combined 17 in just 2009-10 means a great, great deal.  Despite nine returning starters, including running back Bernard Pierce and quarterback Chester Stewart, the offense played like an extremely young unit, playing only one above-average game in September, doing great things in October (after benching Stewart in favor of Mike Gerardi), then trailing off again in November when Pierce got hurt for the second time.  Meanwhile, the defense played like a consistently average unit aside from a late-October, early-November spell of brilliance.  The Owls went 3-1 in games decided by eight points or less, meaning they were closer to six wins than ten, but the defense made sure the Owls stayed on the winning side of .500.  It could be the opposite tale in 2011. 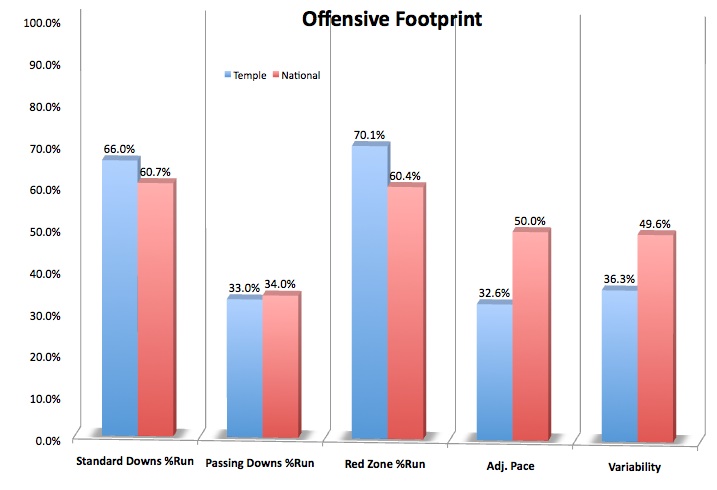 Temple's 2010 offensive campaign was punctuated by ups and downs at the quarterback position.  Chester Stewart began the year as the sure-fire starter, but he struggled, completing just 53 percent of his passes (842 yards, 6.2 per pass) with just four touchdowns to five interceptions.  He was benched in the Bowling Green game and replaced by former walk-on Mike Gerardi; the offense almost immediately perked up.  Gerardi completed 60 percent of his passes for 1,290 yards (8.3 per pass), ten touchdowns and eight interceptions.  Both return for 2011, and both had similar performances in Temple's spring game -- Stewart went 10-for-12 for 202 yards and two touchdowns, Gerardi 13-for-18 for 207 yards and two touchdowns.  (On a side note, Temple's pass defense apparently wasn't very good in the spring game.)

Addazio and offensive coordinator Scot Loeffler should feel pretty comfortable with the personnel at hand.  Below is a look at Florida's offensive footprint in 2010 with Addazio pulling the strings: 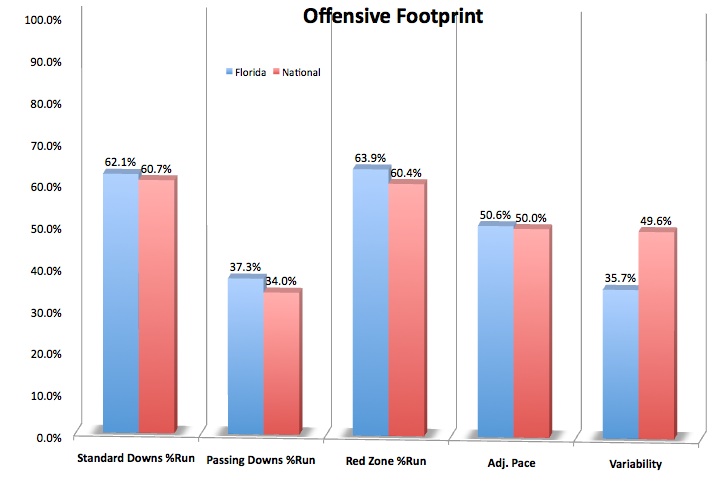 Both Florida and Temple ran more frequently than average on standard downs last year; Florida ran even more than Temple on passing downs.  Both of them stuck to a pretty clear identity, with the primary difference being pace -- Florida's tempo was right on that of the national average, while Temple milked as much clock as possible between plays.  If there is another difference, it is in the fact that Temple's passing game seemed a bit old-school, with longer, lower-percentage routes playing a prevalent role.  Expect that to be tamped down a bit in 2011, both because of the coaching staff and the loss of top big-play threat Michael Campbell (724 yards, 16.1/catch, 9.1/target, 56% catch), who was a favorite target of both Stewart and Gerardi.

Temple will have interesting receiving options returning, however: receiver Rod Streater (481 yards, 16.0/catch, 8.9/target, 56% catch, 4 TD) was used in very similar ways to Campbell; tight end Evan Rodriquez is an even more intriguing option -- he caught 84 percent of the passes thrown his way, posting 21 catches for 247 yards (11.8/catch, 9.9/target) for the season.  With Addazio running the show, he could get used in an Aaron Hernandez-type of role, and he will almost certainly see more than nine percent of overall targets like he did last year. 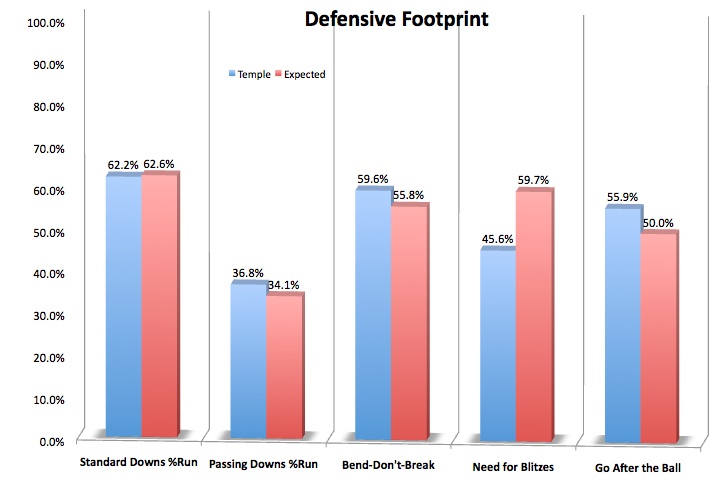 While injuries and ineffectiveness slowed the offense down, the defense was a lot more consistent.  Not necessarily a lot better ... just more consistent.  They played the bend-don't-break game to near-perfection, minimizing big plays, forcing fumbles, knocking away passes, and locking opponents down in the red zone; over the last five (slow-paced) games of the season, they gave up just 12.8 points per contest.  The offense will have to carry its weight this year, however, because quite a few contributors are gone.

We often misunderstand the 'returning starters' figure.  Teams like Florida can afford to replace players like Wilkerson, Jarrett, Elijah Joseph and company will little to no drop-off because their recruiting has been strong.  While Golden clearly upgraded Temple's talent level rather significantly during his tenure ... has it been upgraded enough to absorb a loss like that?  We'll find out, of course.

Inspectah Deck, "Forget Me Not."  Seriously, how exactly did 8-4 Temple not get into a bowl?  UTEP was in a bowl, and they were terrible.

And assuming Ghostface is properly-rated at this point, is it safe to say that Inspectah is the most underrated member of Wu-Tang?

Best version of this song, by the way: the Wu-Tang/Beatles version.  The crowning achievement of that brilliant mash-up.  So, so good.

(Time out: how in the hell does somebody go from working for famed spread hater Bob Davie to leading Urban Meyer's offense in less than a decade?  Was he sent by Davie to destroy the spread from the inside?  Pretty sure Spencer Hall would buy into this theory.)

Anyway, here are some of Florida's offensive numbers from the Meyer era, both before and after Addazio took the reins.

Lots of context there -- they lost so much talent after the 2009 season, for starters -- but it's still not much of an acquittal of his coordinator abilities.  I'm on to you, Bawb Davie. 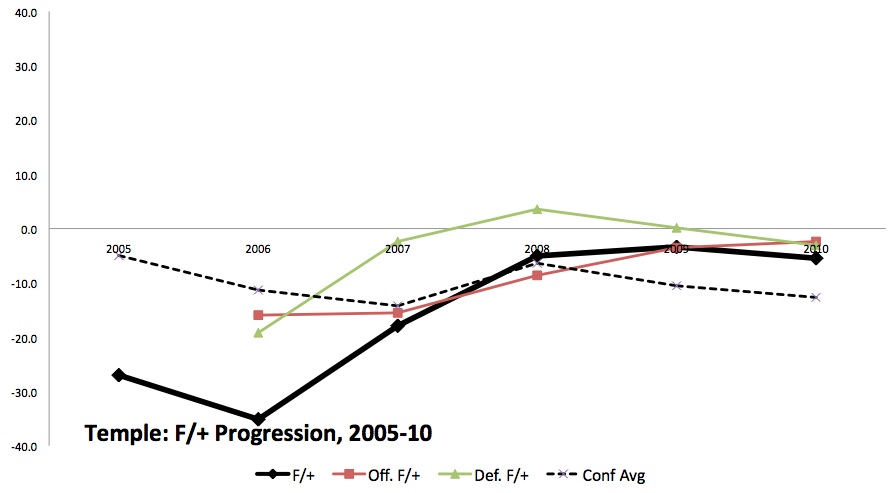 You look at the above chart, and you just cannot help but applaud the job Al Golden did.  He took over a terrible program in 2005, and it immediately got worse.  But the Owls made significant strides in 2007 and 2008, then learned how to win in 2009.  In three years, they went from horrid to downright decent.

Addazio may not have proven himself to be the best offensive coordinator at Florida, but he's no longer an offensive coordinator; he's the head guy, and his job will be to maintain, maintain, maintain.  With so much talent lost on defense and a YPP margin suggesting they were unlucky (though their fumble recovery percentage suggests the opposite), it wouldn't surprise me if Temple were to take a step or two backwards this year even if Addazio turns out to be a great coach.  If the offense is sparked by a healthy Pierce and a lovely Aaron Hernandez impression from Evan Rodriguez, then that could account for the defensive loss, but we'll see.  Temple's turnaround was so quick and decisive that they should be able to live with a temporary step backwards.